Type 2 diabetes (T2DM) and obesity are both major global health problems, which have been linked with an increased risk of life-threatening comorbidities and enormous economic burdens [1,2]. Epidemiological studies report that most of the patients with T2DM are overweight or obese and, similarly, a significant number of obese individuals have diabetes [3]. This parallel prevalence indicates a strong association between T2DM and obesity. It has been further estimated that every 1 kilogram increase in body weight is associated with a 9% relative increase in diabetes prevalence [4]. Identification of this association has changed the primary goal of diabetes management in obese and overweight T2DM patients, and now controlling the blood glucose and reducing weight are both promoted [5].
Effective management of diabetes cannot be achieved without an appropriate diet, especially for type 2 diabetics who are overweight or obese. The recommended diet for controlling diabetes should be rich in dietary fiber, preferably provided by nature and less processed whole grains [6]. A Harvard study of health professionals found that high intake of whole grains was associated with lower incidence of T2DM [7] and therefore its benefit could be an important part of a diet which can help to improve diabetic control.
Wholegrain foods can be found in a variety of cereals, but the content and solubility of fiber can vary significantly [8]. People with diabetes are often advised to select a good source of whole grains. Oat, with the advantage of having a high concentration of β-glucan, can be used for the management of diabetes [9]. The effects of oat intake have been investigated in several aspects [10,11,12]. Soluble fiber from oats has been found to be effective in lowering total cholesterol and low-density lipoprotein (5%–10% reduction with 3 g β-glucan intake per day), and thus oat and oat-products have already been recommended to patients with hyperlipidemia [13]. Besides, it has been suggested that oat intake can improve insulin response and decrease postprandial hyperglycemia [11,14]. Although these effects have been supported in many studies, others failed to replicate these. In particular, the effects of oat intake on fasting glucose concentration and weight control remain conflicting [11,14]. Therefore, further work is needed to determine whether oat intake has the reported benefits and whether these benefits could be observed similarly in specific populations, particularly in overweight T2DM patients.
To develop a reasonable dietary plan, which includes wholegrain oats, a randomized control trail was conducted among adults with T2DM in Baotou, Inner Mongolia, China. This study aimed to compare the short- and long-term integrative effects of oat intake with a low-fat and high-fiber diet (“healthy diet”) on weight management, blood glucose control and lipid-profile improvement in overweight T2DM patients.

A subgroup of 298 subjects, meeting the Chinese criteria of overweight (body mass index ≥ 24 kg/m2), was selected from 445 adult patients with T2DM, who had participated in the 30-day centralized management of a dietary program and the 1-year free-living follow-up in Baotou, China. The sample size of the original study was calculated based on an estimated standard deviation (SD) of 2.7 mmol/L in HbA1c. A total of 420 participants were required to detect a difference of 0.80 SD of HbA1c with 90% power and allowing for 10% missing data. Individuals who were heavy smokers (smoking more than or equal to 25 cigarettes per day) or heavy drinkers (drinking more than 25 mL alcohol per day), or had recent changes (less than 3 months) in diet and physical activities, or had severe cardiovascular, renal or hepatic complications, mental illness or other serious diseases, or recently accepted glucocorticoid treatment, or had already been eating oats or oat products as part of their diet, were excluded. At the end of recruitment, a total of 445 individuals were included and randomized, of which 298 overweight participants were selected for this subgroup analysis. Eleven patients dropped out during the 1-year follow-up due to personal reasons with no difference in drop-out rates among the four groups (p = 0.774) (Figure 1).

This study was approved by the ethic review board of China-Japan Friendship Hospital of Health Ministry China in December 2011 and registered under ClinicalTrials.gov (Identification code: NCT01495052 available at https://clinicaltrials.gov/). Written and oral information of the study protocol was given prior to the study initiation. Informed consent was signed by every participant.

During the 30-day centralized intervention, all participants were arranged to live in a hotel and have meals together under the supervision of 12 qualified dietitians and 18 well trained investigators. Food intake and compliance of participants were recorded every day by the investigators. Physical activities were assessed and categorized using the recommendations of the international physical activity questionnaire (IPAQ). Participants were required to record uncomfortable symptoms and maintain their normal physical activities and medications. After a one-week run-in period, participants were randomly allocated to one of the following four groups by computer-generated random numbers. The usual care group (n = 60) served as the control group and received no dietry intervention. They took meals depending on their own eating habits. The healthy diet group (n = 79) received a low-fat and high-fiber diet (“healthy diet”). A 7-day cyclical menu (Supplementary Materials Table S1) was designed according to the China Food Composition [15], the Dietary Guidelines for Chinese Resident [16] and the China Medical Nutrition Therapy Guideline for Diabetes [17] to provide a low-fat and high-fiber diet. Each participant was provided with three meals a day, which contained 2275 kcal for men and 1890 kcal for women (60% from carbohydrate, 22% from fat, 18% from protein) and 30 g of dietary fiber. In addition, a maximum of an extra 10% of daily kcal intake was allowed according to the individual need of participants. For the 50 g and 100 g-oats groups, participants received the “healthy diet” with the same amount of cereals replaced by 50 g and 100 g of wholegrain oats respectively. The daily intake of energy and macronutrients for each group is shown in Table 1. Apart from the dietary intervention, the study dieticians gave nutritional education and training to the three intervention groups six times per week to encourage the participants to have a general healthy diet in daily life.
After the centralized management, all participants returned home and were asked to continue with their intervention and record their daily diet, uncomfortable symptoms and medication changes. Wholegrain oats were continuously provided for the 50 g and 100 g-oats groups. Investigators continued to give diet recommendations and supervise the daily life of participants by monthly group interviews through network-chat, telephone or face-to-face interviews. Scheduled clinical checks were performed every three months. The follow-up lasted for one year.

The wholegrain oats used in this study were provided by Inner Mongolia Sanzhuliang Natural Oats Industry Corporation (IMSNOIC) (Hohhot, Inner Mongolia, China). The oats were grown in northwest China and were processed by a peeling technology which retained the necessary ingredients and beneficial nutrients of the whole grain [18]. The nutrient composition of this product was analyzed by the laboratory of the School of Life Sciences, Sun Yat-sen University, according to a standard procedure (GB/T 5009). Each 100 g of wholegrain oats contained 63.5 g carbohydrate, 7.6 g fat, 13.7 g protein, and 8.7 g fiber, of which approximately 5.3 g was β-glucan.

Categorical and continuous variables were analyzed by either Chi-squared test or sample t-test. Responses to interventions were assessed by the changes in anthropometric and metabolic variables, determined at baseline and at the end of the intervention. A generalized linear model (GLM) was applied to estimate the changes after adjusting for potential confounding factors including sex, age, drinking, smoking, physical activity level, education level, family history of diabetes, diabetic medications and the duration of diabetes. The mean differences (MD) of changes among groups were calculated to compare the effects of different interventions. We performed multiple imputations to account for missing data (SAS Institute, Inc., Cary, NC, USA). Results are presented as means with standard deviation (SD) or 95% confidence intervals (95% CI). All tests were two-sided and p < 0.05 was considered to be statistically significant. Analyses were conducted with the IBM SPSS Statistics 22 (IBM Corp., Armonk, NY, USA, 2013), unless otherwise stated.

In conclusion, our study provided some supportive evidence that oats can be a good selection of whole grains for overweight diabetics, but further larger scale studies are needed to evaluate these findings further.

The following is available online at https://www.mdpi.com/2072-6643/8/9/549/s1, Table S1: A sample menus of the general healthy diet provided for intervention groups (average consumption per day).

Y.L. conceived the idea for the study. X.L. performed the statistical analysis and drafted the manuscript. All authors participated in the design of the study, study supervision, data collection and interpretation, revised and approved the final version of the manuscript.

The authors declare no conflict of interest. This study was sponsored by the Inner Mongolia Sanzhuliang Natural Oats Industry Corporation (IMSNOIC). The sponsor had no impact on the results and manuscript. 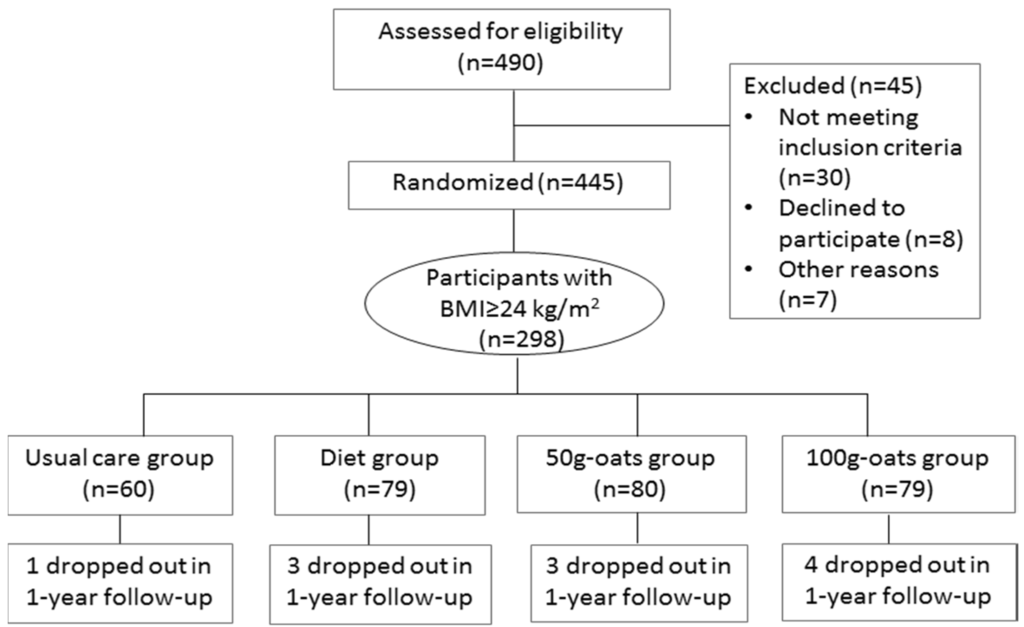 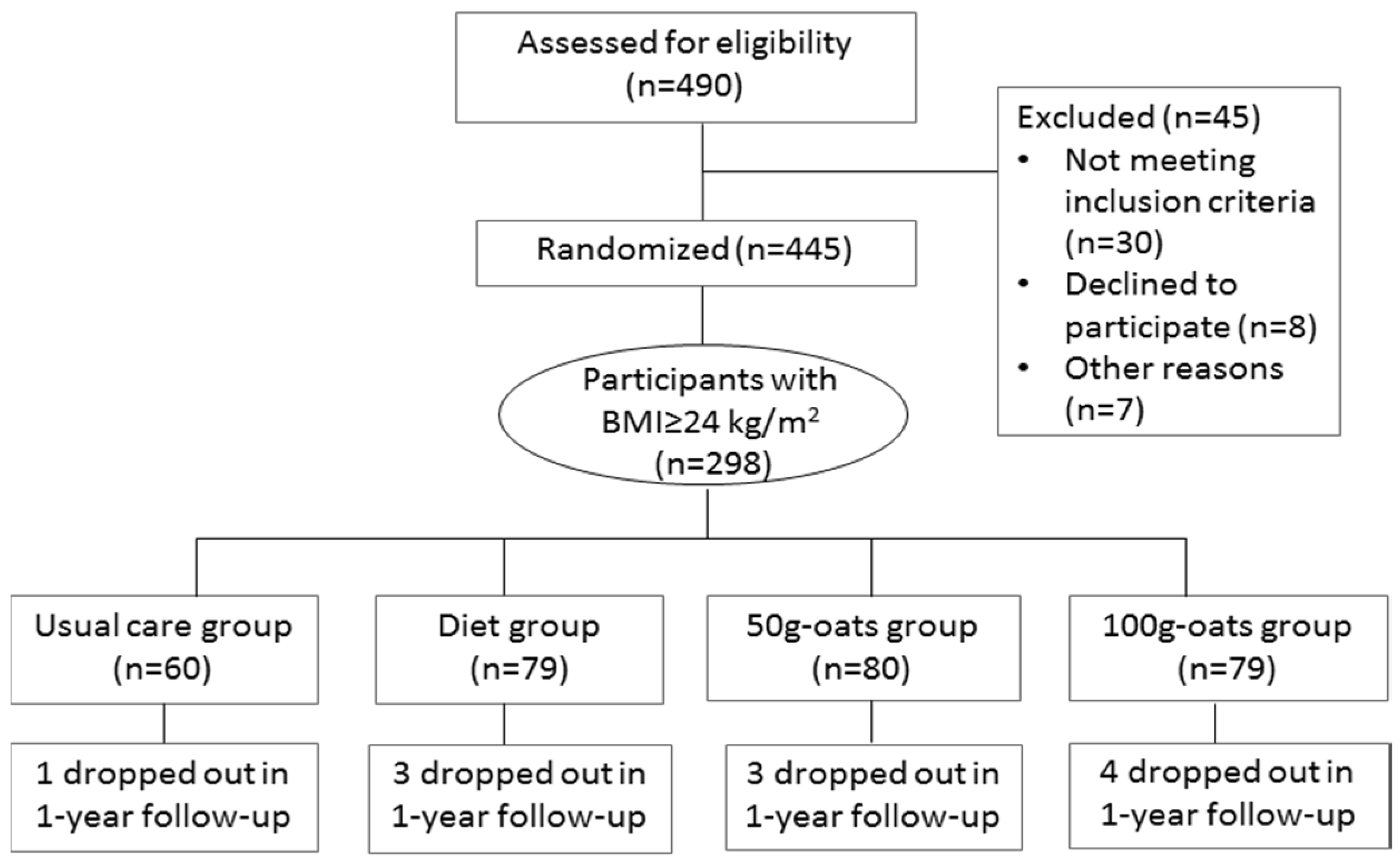 Table 1. The daily intake of energy and macronutrients (one day’s intake).
* Variables are presented as mean with (SD (standard deviation)).

Table 3. Changes in variables and mean differences (MD) in changes among groups after 30-day intervention *.
* All values were presented as means (SD) or means (95% CI). Changes from the baseline were adjusted for potential confounding variables (sex, age, drinking, smoking, physical activity level, education level, family history of diabetes, diabetic medications and duration of diabetes) in the analysis of covariance model.

Table 4. Changes in variables and mean differences (MD) in changes among groups after 1-year follow-up *.
* All values were presented as means (SD) or means (95% CI). Changes from the baseline were adjusted for potential confounding variables (sex, age, drinking/smoking, physical activity level, education level, family history, medications and duration of diabetes) in the analysis of covariance model.