Selenium and Metabolic Disorders: An Emphasis on Type 2 Diabetes Risk

The carotenoids are a group of over 600 pigments that are synthesized by plants and microorganisms. Lycopene is a red-pigmented carotenoid present in tomatoes, watermelon, papaya, and other fruits and vegetables. There is no endogenous production of lycopene or other carotenoids in animals and they are only obtained from the diet. Higher intake and circulating concentrations of carotenoids have been associated with lower risk of cancer [1], cardiovascular disease [2,3], metabolic syndrome [4], and diseases of the eye [5]. The protective effects of dietary carotenoids appear to be due in part to their antioxidant activity. Lycopene has among the most potent antioxidant effects of the dietary carotenoids and is distinct from some other carotenoids because it does not form vitamin A [6]. Interventions utilizing lycopene-rich diets and lycopene supplementation have revealed reductions in inflammation, oxidative stress, markers of atherosclerosis, and increases in high density lipoprotein (HDL) [7,8]. Meta-analysis of intervention trials has also revealed that lycopene supplementation reduces serum cholesterol and blood pressure [9].
Prostate cancer is the disease that has been studied most extensively in relation to lycopene. While the evidence is not conclusive, a number of large epidemiologic studies indicate that higher dietary intake and serum concentrations of lycopene are associated with lower risk of prostate cancer [10,11,12], particularly lethal prostate cancer [13]. Lycopene supplementation has also been shown to inhibit the progression of benign prostate hyperplasia [14]. It has also been proposed that serum concentrations of lycopene and other carotenoids may be useful in the early detection of prostate cancer [15,16]. There are three chief proposed target pathways for lycopene’s involvement in prostate cancer: antioxidant and anti-inflammatory function, hormonal modulation, and epigenetic modification [17,18,19,20]. Lycopene appears as if it may play a role in prostate cancer, but there have also been a number of large studies that have found no relationship between serum concentrations of lycopene and risk of prostate cancer [21,22]. Thus, the relationship between both dietary intake and circulating concentrations of lycopene and prostate cancer is not fully understood and there has been a call for further study in this area [11].
Further confounding the relationship between lycopene and human disease is the relatively poor correlation between dietary intake of lycopene in isolation and its concentrations in serum [23]. The absorption, bioavailability, and serum concentrations of lycopene vary substantially due to other accompanying dietary factors. For instance, consuming fat along with lycopene greatly increases circulating concentrations of this lipid-soluble nutrient [24]. Genetic variants may also play a role in how carotenoids are absorbed, transported, or metabolized and could help explain the discord between dietary intake and serum concentrations of lycopene. Previous candidate gene studies have identified genetic variants associated with circulating lycopene concentrations. Assessment of single nucleotide polymorphisms (SNPs) using candidate genes yielded variants in intestinal fatty acid binding protein, a cytoplasmic protein that transports long chain fatty acids [25], as well as Apo A-IV and Apo B, proteins involved in lipoprotein metabolism [26].
There are two previously reported genome-wide association studies (GWAS) of lycopene. The first, a population based study in the Tuscany Chianti region of Italy, did not identify any genome-wide significant associations with lycopene [27]). In the other, three genetic loci were identified as associated with circulating lycopene concentrations in a multi-ethnic population of women [28]. SNPs in the gene SCARB1, which encodes for a cholesterol membrane transporter, were genome-wide significant in the multi-ethnic meta-analysis, though the signal was driven by participants of Hispanic and African heritage primarily. The other two associated loci in SLT3 and DHRS2, were identified in African-Americans only. No genome-wide significant associations have been identified in populations of European descent.
The main aim of this study was to identify novel genetic predictors of serum lycopene concentrations. We studied a population of Old Order Amish adults living in Lancaster County, Pennsylvania in whom serum lycopene concentrations were measured at the conclusion of a controlled diet. The Amish are a commonly studied population for these types of studies because, among other reasons, their relatively homogeneous genetics and lifestyles across the population increase the ability to detect genetic signals [29,30,31,32].

The study sample was composed of 441 Caucasian participants from the Heredity and Phenotype Intervention (HAPI) Heart Study who completed a 6-day controlled diet and from whom frozen blood samples were available for serum lycopene measurement. The HAPI Heart Study is a family study and by design included individuals from the same nuclear family. Moreover, many of the enrolled families were related to each other given the social structure of the Old Order Amish community. The design of the HAPI Heart Study, including study inclusion/exclusion criteria, demographics of the full study sample, etc., has been described previously [33] and was registered on Clinicaltrials.gov (NCT00664040). Of the 868 Old Order Amish adults recruited into the HAPI Heart study, 469 were administered the controlled dietary intervention and subsequently provided a fasting blood sample at the conclusion of the 6-day diet. There were 27 samples of insufficient quality to measure serum lycopene concentrations and one sample excluded from analysis due to extreme serum lycopene concentration (22,995 μg/dL) that was considered an outlier. There were 308 nuclear families in our study sample, ranging from one participant to nine participants per family. The participant relatedness was as follows: 113 parent-children, 198 sibling, 105 avuncular, 33 first cousins, and six grandparents-grandchildren. The study was approved by the Institutional Review Board of the University of Maryland School of Medicine and all participants provided written informed consent.

Frozen blood samples that had been obtained after a 12-h fast were assayed for serum lycopene concentrations at Johns Hopkins University. 200 μL from each frozen blood sample were used for the reverse-phase high-pressure liquid chromatography (HPLC) assessment of serum lycopene concentrations [35]. There were 13 batches run and the intra-assay and inter-assay coefficients of variation CVs for lycopene were 7.9% and 17.4%, respectively.

A genome-wide association study assesses associations of phenotype with single nucleotide polymorphisms (SNPs) throughout the genome. Study participants were genotyped using either the Affymetrix 500k or Affymetrix 1M SNP chip v6.0 by the Genomics Core Laboratory at the University of Maryland. Genotyping calls were made using Birdseed, which is part of the Birdsuite tools [36]. A total of 397,704 SNPs were in common on both arrays and used for analysis. SNPs with a minor allele frequency (MAF) ≥ 1%, a call rate exceeding 95% and conforming to the expectations of Hardy-Weinberg equilibrium (p > 10−6) were used for imputation with MACH using the HapMap CEU reference sample [37]. Results were filtered using a MAF ≥ 2% and an imputation quality score ≥ 30%, for a final analyzed SNP count of 2,302,013.

Descriptive statistics were performed to characterize the study sample and determine the mean concentrations of serum lycopene. For GWAS analysis, we estimated the effect of genotype on lycopene levels, adjusting for the effects of age, sex, and body-mass index (BMI) using a general linear model. Genotype was coded as the number of copies of the reference allele (0, 1, or 2), thus corresponding to an additive genetic model. The GWAS analyses were performed using the MMAP software [38], which accounts for family structure as a random effect. Statistical analysis was performed using a variance component approach to account for relatedness among study participants. This approach has previously been shown to provide valid estimates of regression parameters [39]. To account for the multiple SNPs tested, we considered associations at p < 5 × 10−8 to be statistically significant. At this genome-wide significance threshold, we estimated that our sample provided 80% power to detect SNPs accounting for 9%–10% of trait variation.

Table 1. Characteristics of Old Order Amish study sample from Lancaster County, Pennsylvania after consuming a 6-day controlled diet.
A Manhattan plot summarizing results of the GWAS is provided in Figure 1. The top hits from the association analyses are presented in Table 2. We detected genome-wide significant evidence for association of lycopene levels to a locus on chromosome 4q31 (lead SNP = rs7680948; age, sex, and BMI-adjusted p = 3.41 × 10−9). Each copy of the A allele was associated with a 8.6 μg/dL decrease in serum lycopene, and this locus accounted for 9.3% of the variation in lycopene levels. The minor allele at the locus (A) is common in the Old Order Amish (MAF = 0.202) as well as other populations (Hapmap CEU = 0.265, Hapmap YRI = 0.394). Figure 2 provides a regional association plot of the genome-wide significant association on chromosome 4. Rs7680948 is in an intronic region of gene SETD7. Gene SETD7 encodes the enzyme histone H3-K4 methyltransferase SETD7, one of the histone methyltransferases (HMTs) enzymes. The quantile-quantile plot provided in Figure 3 reveals little evidence for genomic inflation (lambda = 1.01), as the observed distribution of p-values for the genome-wide association tests is consistent with that expected under the null. 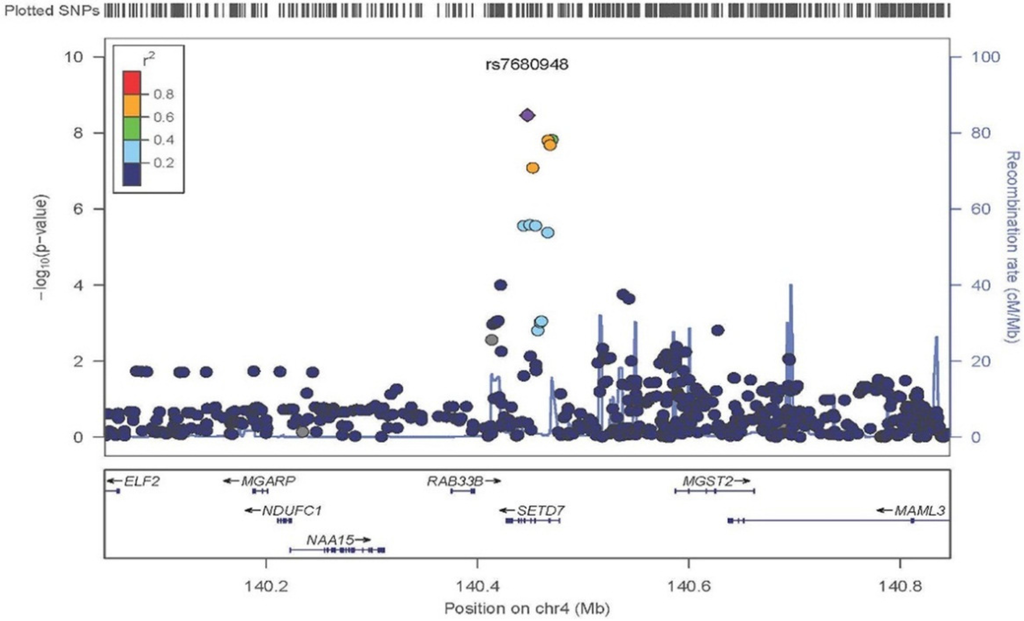 We additionally identified three other loci for which associations were observed at p < 1 × 10−6 that are provided in Table 2. We also performed look-ups for SNPs previously reported to be associated with serum lycopene levels in a multiethnic GWAS [28], in which associations were reported at three loci: One achieving genome-wide association to three SNPs in high linkage disequilibrium in SCARB1 (lead SNP: rs1672879) in the meta-analysis across three ethnic groups, and the other two achieving genome-wide significance in the African-American sample only (to SNPs in SLIT3 (lead SNP: rs11057841) and DHRS2 (lead SNP: rs74036811)). Notably, the associated SNPs in SCARB1 have a minor allele frequency (MAF) of only 0.03 in European-Americans and the associated SNPs in SLIT3 and DHRS2 were monomorphic in European-Americans. In the Amish, the MAF of the three SNPs were even lower (MAF = 0.015), and there was no evidence for association with lycopene levels (p = 0.26). Although not a replication, we did, however, detect nominal evidence for association of lycopene levels with a different SNP in SCARB1 (rs11057841; MAF = 0.14; p = 3.79 × 10−4).

The authors would like to thank the study participants for their partnership in research and the staff at the Amish Research Clinic for their assistance. We would also like to acknowledge Nga Hong Brereton, Masters of Science, Registered Dietitian, at Johns Hopkins University School of Medicine for her work in designing and evaluating the nutrient content of the controlled diet in this study.