Nutritional or classical rickets (here labeled as “rickets”) is a worldwide disease involving mostly infants and young children having inadequate sunlight exposure, often associated with a low dietary intake of Vitamin D. Rickets targets all layers of society independently of economic status with historical information spanning more than two millennia. Vitamin D is critical for the absorption of calcium and prevention of rickets in children as well as osteomalacia in adults. The initial and misleading paradigm of the 19th and 20th centuries that rickets may have been the consequence of infection has been, indeed, reversed following the identification of the Vitamin D molecule’s important role in the function of the immune system. Although traditionally considered limited to osteopathology, Vitamin D deficiency is now known to be linked to infection, inflammation, and carcinogenesis. In this review, we consider the key historical (Whistler, pre-Whistler and post-Whistler descriptors) and social facts around rickets; highlight the osteo-pathological features of rickets and the pathology of the upper and lower respiratory tract, stressing the fact that lungs remain the main secondary organ affected by Vitamin D deficiency; and emphasize the public health role in identifying the cases of child neglect or abuse based on the evaluation of the costochondral region. View Full-Text
Keywords: Vitamin D; rickets; history; histology; public health Vitamin D; rickets; history; histology; public health
►▼ Show Figures 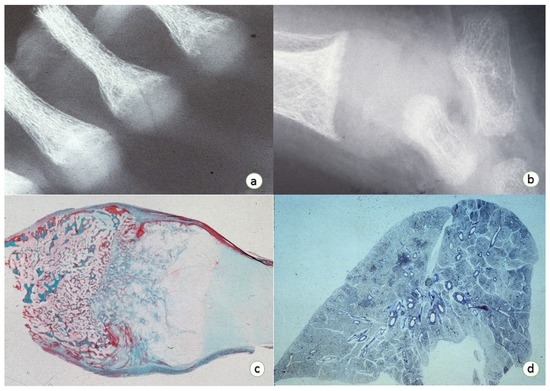