Human milk (HM) contains a plethora of metabolic hormones, including leptin, which is thought to participate in the regulation of the appetite of the developing infant. Leptin in HM is derived from a combination of de novo mammary synthesis and transfer from the maternal serum. Moreover, leptin is partially lipophilic and is also present in HM cells. However, leptin has predominately been measured in skim HM, which contains neither fat nor cells. We optimised an enzyme-linked immunosorbent assay for leptin measurement in both whole and skim HM and compared leptin levels between both HM preparations collected from 61 lactating mothers. Whole HM leptin ranged from 0.2 to 1.47 ng/mL, whilst skim HM leptin ranged from 0.19 to 0.9 ng/mL. Whole HM contained, on average, 0.24 ± 0.01 ng/mL more leptin than skim HM (p < 0.0001, n = 287). No association was found between whole HM leptin and fat content (p = 0.17, n = 287), supporting a cellular contribution to HM leptin. No difference was found between pre- and post-feed samples (whole HM: p = 0.29, skim HM: p = 0.89). These findings highlight the importance of optimising HM leptin measurement and assaying it in whole HM to accurately examine the amount of leptin received by the infant during breastfeeding. View Full-Text
Keywords: leptin; human milk; whole human milk; skim human milk; appetite; obesity leptin; human milk; whole human milk; skim human milk; appetite; obesity
►▼ Show Figures 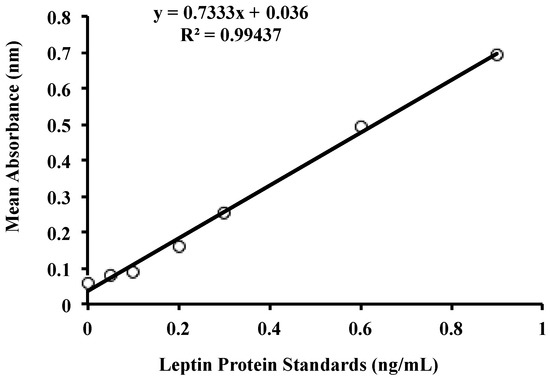