Background: Water consumption as a vital component of the human diet is under-researched in dietary surveys and nutrition studies. Aim: To assess total water and fluid intakes and examine demographic, anthropometric, and dietary factors associated with water consumption in the Australian population. Methods: Dietary intake data from the 2011 to 2012 National Nutrition and Physical Activity Survey were used. Usual water, fluid and food and nutrient intakes were estimated from two days of dietary recalls. Total water includes plain drinking water and moisture from all food and beverage sources; total fluids include plain drinking water and other beverages, but not food moisture. Results: The mean (SD) daily total water intakes for children and adolescents aged 2–18 years were 1.7 (0.6) L for males and 1.5 (0.4) L for females, and for adults aged 19 years and over were 2.6 (0.9) L for males and 2.3 (0.7) L for females. The majority of the population failed to meet the Adequate Intake (AI) values for total water intake (82%) and total fluids intake (78%) with the elderly at highest risk (90%–95%). The contributions of plain drinking water, other beverages and food moisture to total water intake were 44%, 27%, and 29%, respectively, among children and adolescents, and 37%, 37% and 25% among adults. The main sources of other beverages were full-fat plain milk and regular soft drinks for children and adolescents, and tea, coffee, and alcoholic drinks for adults. For adults, higher total water intake was associated with lower percent energy from fat, saturated fat, and free sugars, lower sodium and energy-dense nutrient poor food intakes but higher dietary fibre, fruit, vegetable, caffeine, and alcohol intakes. No associations were found between total water consumption and body mass index (BMI) for adults and BMI z-score for children and adolescents. Conclusion: Reported water consumption was below recommendations. Higher water intakes were suggestive of better diet quality.
Keywords: water intake; dietary pattern; drinking water; diet quality; adults; children water intake; dietary pattern; drinking water; diet quality; adults; children

Water is an essential nutrient required for most of the body’s functions. Evidence suggests that severe dehydration is associated with various clinical conditions, including impaired mental and physical performance, hypertension, urolithiasis, stroke, and certain cancers [1,2]. Even mild dehydration has been shown to impair cognitive functioning, alertness, and exercise capacity [3,4,5]. Despite the consistent evidence linking low water consumption and adverse health outcomes, water intake estimation in free-living populations with ad libitum access to water is lacking.
Recommended intakes for water have been set by a number of organizations although there is no single level of water intake that would ensure adequate hydration and optimal health in all environmental conditions. Requirements vary widely according to environmental conditions, physical activity, dietary intake and individual metabolism. The World Health Organization (WHO) guidelines [6] recommend 2.9 L per day for males and 2.2 L for females to maintain hydration, assuming average sedentary adults under average conditions. In reality, there is substantial scientific evidence relating to differences in water intake across gender, age, anthropometric, and socio-economic subgroups [7,8,9,10].
In Australia, the recommended Adequate Intake (AI) for total water (both fluids and food moisture) and total fluids (excluding food moisture) are set by the National Health and Medical Research Council (NHMRC) and are derived from the median intake estimates from the National Nutrition Survey [2]. The AIs for total water intake (including food moisture) for adults is 3.4 L for males, 2.8 L for females and 1.4–2.2 L for children/adolescents depending on age and gender [2]. The AIs for total fluids are set at 2.6 L for adult males, 2.1 L for adult females, and 1.0–1.9 L for children/adolescents.
The Australian Dietary Guidelines (ADG) encourage water as the fluid of choice and as a general guide for fluids, suggest about 4–5 cups of fluids a day for children up to 8 years, about 6–8 cups for adolescents, 8 cups for women (9 cups in pregnancy and lactation) and 10 cups for men [11]. There is currently little available data on water and fluid intake, beverage sources of intake, and whether recommendations are being met in the Australian population. Although many commonly consumed fluids provide water, they may also be acidic such as low-joule soft drink or contain added sugar, alcohol or caffeine. Recent evidence from the U.S. suggests that plain drinking water consumption is associated with better diet quality [12], and substituting water for sugary beverages is associated with reduced energy consumption and improved body weight management in both children/adolescents and adults [13,14]. However, knowledge of the role of water consumption on diet quality in the Australian population remains limited.
The present study aimed to assess total water and fluid intakes in a nationally representative sample of the Australian population and to examine demographic, anthropometric, and dietary correlates of total water consumption. The secondary aim was to examine the relationship between plain drinking water consumption and dietary factors. These findings will provide fundamental information for future guidelines and may assist further research in the area of water consumption and diet quality, demographic features, and specific health outcomes.

The present study analysed data from the National Nutrition and Physical Activity Survey (NNPAS) 2011–2012, undertaken by the Australian Bureau of Statistics (ABS). The survey was conducted between May 2011 and June 2012, in adults and children/adolescents aged two years and over. Ethics approval for the survey was granted by the Australian Government Department of Health and Ageing Departmental Ethnics Committee in 2011. Further details about the scope and the methodology of the survey are available from the NNPAS Users Guide [15]. A total of 12,153 respondents were interviewed face-to-face for the collection of dietary intake data using an Automated Multiple-Pass 24-h recall [15] and a second 24-h recall was collected from 7735 respondents via a telephone interview. Respondents were specifically probed regarding water intake and other beverages. After each 24-h recall the respondents were asked additional questions about the intake and main source of plain drinking water. This systematic process has been validated to be effective in maximizing the respondents’ ability to recall and report foods eaten in the previous 24 h [15]. For children under 15 years of age, parents/guardians were used as proxies. Where permission was granted by a parent/guardian, adolescents aged 15–17 years old were interviewed in person. If permission was not granted, questions were answered by an adult [15]. The validity of proxy report for children’s 24-h dietary intake data collection has been reported previously [16]. A food composition database, AUSNUT 2011–2013, developed specifically for NNPAS 2011–2012, was used to estimate water, fluid, food moisture, foods, beverages, and nutrient intakes [17].

2.3. Anthropometry, Demographic, and Other Characters

Respondents’ weight, height, and waist circumference (WC) were objectively measured. Body Mass Index (BMI) for adults was calculated as weight (kg) divided by height squared (m2). BMI z-scores for children/adolescents were calculated using World Health Organization age-and gender-specific growth charts [18]. Age groups were categorized based on the NNPAS age categories (2–3, 4–8, 9–13, 14–18,19–30, 31–50, 51–70, and 70+ years) and socio-economic quintiles were based on the Socio-Economic Index of Disadvantage for Areas (SEIFA), where the first SEIFA quintile indicates the most disadvantaged areas [19]. Lifestyle factors including total minutes of physical activity during the past week and total sleep duration the day prior to the interview were self-reported at the time of interview.

The term “core food groups” as used in this study refers to grains, vegetables, fruits, dairy products, and meat and alternatives, as described in the Australian Guide to Healthy Eating (AGHE) [11,20]. To assess consumption of all foods within a food group, all individually recorded food items and foods as part of a mixed dish were included. The individual food components from a mixed dish were estimated using the AUSNUT 2011–2013 recipe file [17] and were classified under their respective core food group. Discretionary foods (solid) such as cakes, biscuits, confectionary, deep-fried fast foods, and processed meat, and discretionary beverages such as soft drinks, fruit drinks and alcoholic drinks are defined as “foods high in saturated fat and/or added sugars, added salt or alcohol and low in fibre” and were categorized accordingly [19].

Misreporting has been identified in the NNPAS 2011–2012 survey, with 16%–26% of the respondents classified as under-reporting total energy intake [19]. To enable a more accurate interpretation of dietary data, it has been suggested that analysis be conducted with and without potential under- and over-reporters [21,22,23]. Plausible reporters were identified based on the Goldberg cut-off (energy intake: basal metabolic rate 0.92–2.17 for usual intake from 2 days’ data) [24]. The Goldberg cut-offs have been validated for use with data from 24-h recalls [25]. In this paper, only the results from plausible-reporters are presented.

Statistical analyses were performed using SPSS for Windows 22.0 software (IBM Corp. Released 2013. IBM SPSS Statistics for Windows, Version 22.0., Armonk, NY, USA). Respondent’s usual intakes of plain drinking water, other beverages, food moisture, core food groups, and discretionary foods/beverages from the two 24-h recalls were analysed using the Multiple Source Method [26] (presented in Table 1, Table 2 and Table 4 and Figure 1). Only the first day of recall was used to examine proportions of contributions to total water intake (Table 3 and Figure 2). Descriptive statistics were used to report the total water intake according to different characteristics. Children/adolescents and adults were analysed separately and also by gender due to the different recommended intakes [2]. Data were presented as the per capita mean and standard deviation (SD), median and the 25th and 75th percentiles, or as a percentage (%). Total water intake was categorized into quartiles to assess respondents’ characteristics and dietary intakes. Chi-square tests and ANOVA analysis were used to assess the differences between proportions and to compare mean differences in consumption and linear trends where appropriate. Median differences were compared using Kruskal-Wallis tests. Multiple linear regression methods were used to examine the relationship between usual plain drinking water intake and covariates including gender, age, socio-economic status, and dietary factors, adjusted for total energy intake and physical activity level. For all tests, a p-value of < 0.05 was considered statically significant.

This study provides valuable new data on the consumption of water and other beverages in a sample representative of the Australian population. Reported water consumption was below recommendations, particularly for the elderly population who may be at higher risk of inadequate hydration. Additionally, our results showed that higher intakes of plain drinking water were associated with positive dietary features, thus making water an optimal beverage choice. Given the interest in understanding the association of water intake with a variety of health outcomes, these findings provide fundamental information to develop effective health promotion policies and campaigns for the Australian population. 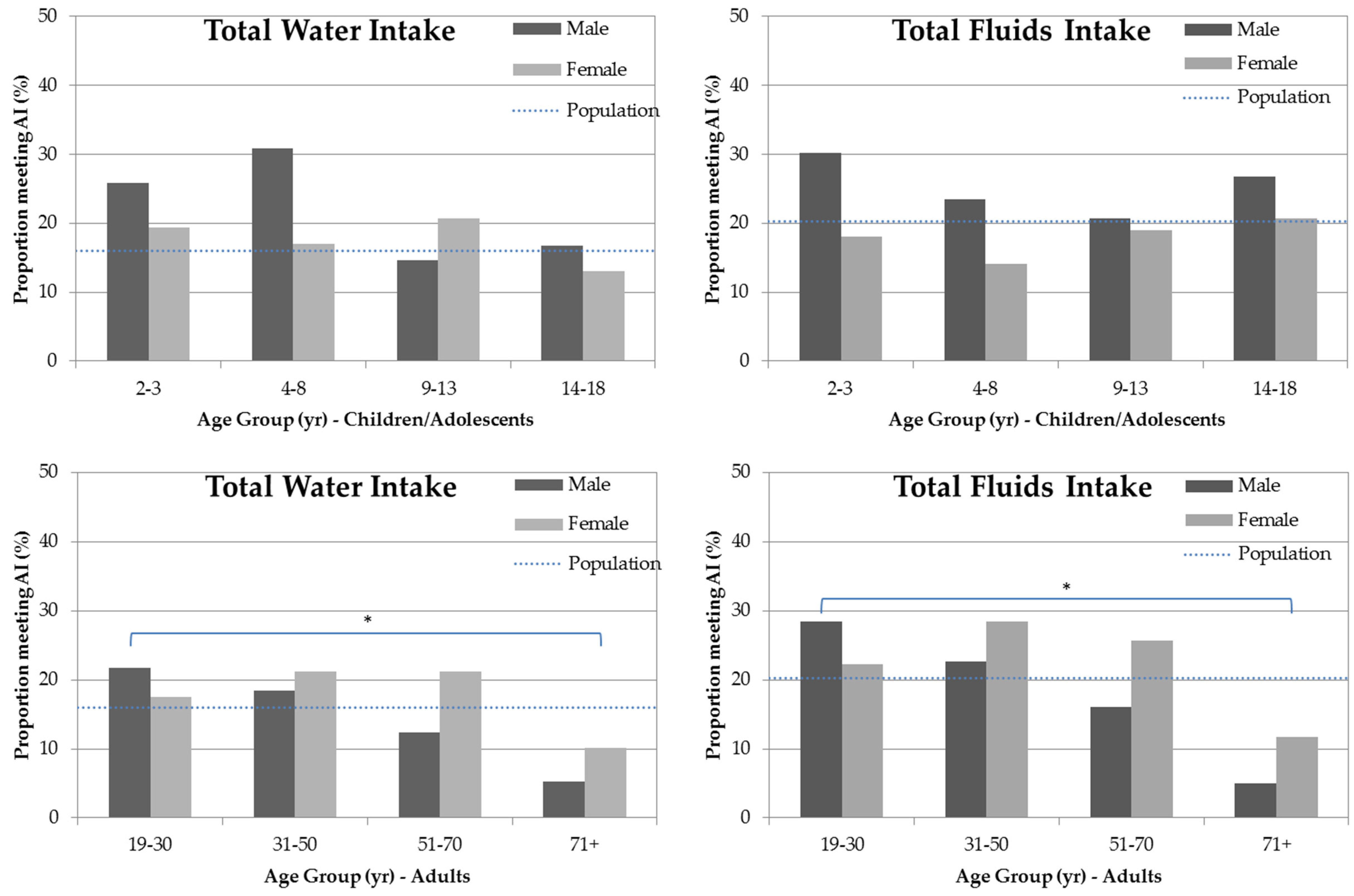