Walnuts contain a number of potentially neuroprotective compounds like vitamin E, folate, melatonin, several antioxidative polyphenols and significant amounts of ω-3 fatty acids. The present study sought to determine the effect of walnuts on mood in healthy volunteers. Sixty-four college students were randomly assigned to two treatment sequences in a crossover fashion: walnut–placebo or placebo–walnut. At baseline mood was assessed using Profiles of Mood States (POMS). Data was collected again after eight weeks of intervention. After six-weeks of washout, the intervention groups followed the diets in reverse order. Data was collected once more at the end of the eight-week intervention period. No significant changes in mood were observed in the analyses with both genders combined and in females. However, we have observed a significant medium effect size improvement in the Total Mood Disturbance score (−27.49%, p = 0.043, Cohen’s d = 0.708) in males. In non-depressed healthy young males, walnuts seem to have the ability to improve mood. View Full-Text
Keywords: randomized controlled trial; RCT; walnuts; males; mood randomized controlled trial; RCT; walnuts; males; mood
►▼ Show Figures 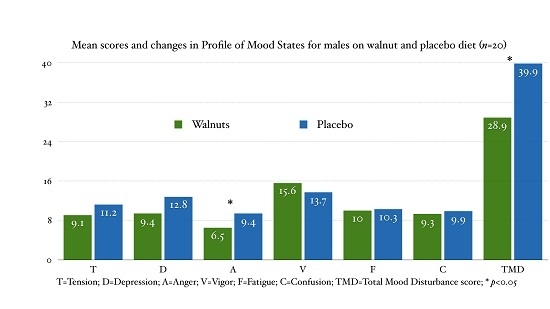