The serotonergic system forms a diffuse network within the central nervous system and plays a significant role in the regulation of mood and cognition. Manipulation of tryptophan levels, acutely or chronically, by depletion or supplementation, is an experimental procedure for modifying peripheral and central serotonin levels. These studies have allowed us to establish the role of serotonin in higher order brain function in both preclinical and clinical situations and have precipitated the finding that low brain serotonin levels are associated with poor memory and depressed mood. The gut-brain axis is a bi-directional system between the brain and gastrointestinal tract, linking emotional and cognitive centres of the brain with peripheral functioning of the digestive tract. An influence of gut microbiota on behaviour is becoming increasingly evident, as is the extension to tryptophan and serotonin, producing a possibility that alterations in the gut may be important in the pathophysiology of human central nervous system disorders. In this review we will discuss the effect of manipulating tryptophan on mood and cognition, and discuss a possible influence of the gut-brain axis. View Full-Text
Keywords: gut-brain axis; mood and cognition; tryptophan; serotonin gut-brain axis; mood and cognition; tryptophan; serotonin
►▼ Show Figures 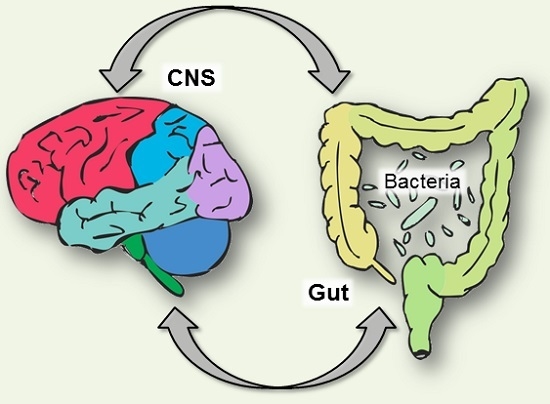