Effects of Dietary Protein and Fiber at Breakfast on Appetite, ad Libitum Energy Intake at Lunch, and Neural Responses to Visual Food Stimuli in Overweight Adults
Next Article in Special Issue

Fatty acids (FAs) are structural components of organs, energy sources, precursors of bioactive compounds such as eicosanoids, including prostacyclins, prostaglandins, thromboxanes, and leukotrienes. FAs also regulate the expression of transcription factors. All FAs provide energy, whereas polyunsaturated fatty acids (PUFAs) are required for structural and metabolic functions.
The ω-3 and ω-6 PUFA families are synthesized from their essential fatty acids (EFAs), namely α-linolenic acid (αLA, 18:3 ω-3) and linoleic acid (LA, 18:2 ω-6), respectively. αLA and LA cannot be synthesized de novo [1] and are, therefore, supplied in the diet [2]. During pregnancy, the EFAs and PUFAs cross the placenta to maintain their supply to the fetus [3]. LA is abundant in the Western dietary pattern and is the precursor of arachidonic acid (AA, 20:4 ω-6) [2]. αLA is abundant in seed oils and is the precursor of eicosapentanoic acid (EPA, 20:5 ω-3) and docosahexaenoic acid (DHA, 22:6 ω-3) [1]. Metabolically important PUFAs during development are AA, EPA, and DHA which are not required from the maternal diet during pregnancy to meet fetal demands since they can be synthesized endogenously from the EFAs. However, the conversion of EFAs to PUFAs by the fetus is very limited and, therefore, the plasma and tissue concentrations of these FAs depend mainly on exogenous supply. Thus, during periods of rapid intrauterine growth, the production of the EPAs, DHA, and AA may be inadequate and considered as EFAs for the fetuses [4]. A sufficient supply of these FAs during pregnancy and the neonatal period is critical for normal fetal growth and proper neurological development and function [5,6].
Maternal dietary FAs, particularly PUFAs, may influence epigenetic gene regulation by inducing or repressing transcription of specific genes during critical ontogenic periods [7,8] with long-term consequences for offspring health. During pregnancy, the mother transitions through different metabolic conditions, shifting from anabolism during the first two thirds of gestation, by accumulating fat depots, to a catabolic state during the last third, when fat depot breakdown is enhanced [9,10,11]. These metabolic transitions contribute to the development of maternal hyperlipidemia with major implications for fetal growth [12]. Moreover, these adaptations are altered when the maternal diet is unbalanced by a high fat (HF) content with consequences in placental nutrient transport and fetal growth [13]. Specific placental nutrient transporters, namely glucose transporter (GLUT) 1 and sodium-coupled neutral amino acid transporter (SNAT) 2, are up-regulated in response to a high fat diet (HFD) [13].
The ingestion of a HFD during pregnancy influences both maternal and offspring health outcomes as gestational HF feeding are associated with derangements in both their metabolism and physiology that may be immediate, transient or permanent. Whereas most studies focus on developmental programming effects, the present study will investigate the differential FA profiles in maternal metabolic organs near term. With the increasing proportion of women of childbearing age that are overweight or obese and consume unhealthy diets during pregnancy, there is a great need to study dietary patterns as they influence both maternal and offspring health outcomes. Since altered dietary composition during specific periods of pregnancy could differentially affect maternal FA profiles with consequences in their availability to the fetus, this study investigates the effect of a HFD administered to pregnant rats at different stages of pregnancy on lipid profiles in near-term mothers. Maternal plasma, hepatic, adipose tissue, and placenta FA profiles were determined.

Ethical approval was obtained by the Animal Ethics Committee of the South African Medical Research Council prior to experimentation. Adult female Wistar rats from our animal facility were maintained at 22 ± 2 °C, 55% ± 10% relative humidity and 12 h light/dark cycles and fed the control diet. The female rats fed a control diet were mated with age-matched male rats. After mating was confirmed by the presence of vaginal plug(s), pregnant rats were randomly assigned to the experimental groups, housed singly, and subjected to the experimental design summarized in Table 1. Briefly, pregnant mothers (n = 4–6 per group) were fed a control or HF diet ad libitum during specific periods of gestation. The HFD was formulated by in-house dieticians and was constituted by 40% fat, 14% protein, and 46% carbohydrate, whereas the control diet was acquired commercially (Epol, Pietermaritzburg, South Africa) and contained 10% fat, 15% protein, and 75% carbohydrate (Table S1). As summarized in Table 1, the groups were mothers maintained on a HFD during the first (HF1), second (HF2), or third (HF3) week of gestation, or for all three (HFG) weeks of gestation; for the remainder of gestation, mothers were fed the control diet.

At days zero (e0, just prior to mating), seven (e7, early pregnancy), 14 (e14, mid pregnancy) and 20 (e20, near-term), blood was collected from the tail after 3 h of fasting. Mothers were anesthetized via an anesthetic machine (Motivus Resuscitator Type AV, Crest Healthcare Technology Ltd., Johannesburg, South Africa) with fluothane (Halothane, AstraZeneca Pharmaceuticals, Johannesburg, South Africa) and 2% oxygen. After the mothers were anesthetized, the tip of the tail was heated with a ultraviolet (UV) lamp to facilitate blood flow then snipped with a surgical blade. Blood was collected in ice-cooled tubes containing 1 mg/ml of Na2-EDTA. After centrifugation, plasma samples were stored at −20 °C until analysis. After the last blood collection (e20), mothers were maintained under anesthesia and whole liver, lumbar adipose tissue, and placenta were collected and stored at −80 °C until analysis.

Blood glucose (glucometer, Precision QID, MediSense, Cambridge, UK) and serum insulin (rat insulin RIA kit, Linco Research, St. Charles, MO, USA) concentrations were measured. Homeostasis model assessment (HOMA)-insulin resistance ((fasting plasma glucose (mmol/L) X fasting serum insulin (mU/L))/22.5)) was calculated. Plasma triglycerides (TAG), cholesterol (Spinreact Reactives, Girona, Spain), and non-esterified fatty acid (NEFA) (Wako Chemicals, Neuss, Germany) were determined enzymatically using commercial kits. For FA profile analyses, nonadecenoic acid (19:1) (Sigma-Aldrich, Madrid, Spain) was added as the internal standard to fresh aliquots of diets and frozen plasma and tissue which were used for lipid extraction and purification [14]. For the placenta, lipid extracts were evaporated to dryness and resuspended in chloroform in the presence of activated silicic acid to extract the neutral lipids whereas the dried chloroform-washed silicic acid fraction was treated with methanol to extract the phospholipids. The final lipid extracts were evaporated under vacuum and the residue suspended in methanol/toluene followed by methanolysis in the presence of acetyl chloride at −80 °C for 2.5 h as previously described [15]. FA methyl esters were separated and quantified on a Perkin-Elmer gas chromatograph (Autosystem, Madrid, Spain) with a flame ionization detector and a 20 m Omegawax capillary column (internal diameter 0.25 mm). Nitrogen was used as the carrier gas and the FA methyl esters were compared to purified standards (Sigma-Aldrich). Quantification of the FAs in the samples was performed as a function of the corresponding peak areas and compared to the internal standard.

One-way analysis of variance (ANOVA) and Bonferroni’s post-test were applied with data reported as means ± standard error of the mean (SEM) and significance established at p < 0.05. However, for dietary FA and fetal-maternal FA analyses, the Student’s t-test was applied.

There were no differences in glycemia, insulinemia, and HOMA-insulin resistance amongst the groups (Table S3).

3.3. Fatty Acid Profile in the Diets

As shown in Figure 1, the proportion of saturated FAs (namely myristic, palmitic, and stearic acids) and oleic acid were higher in the HFD than in the control diet with lower proportions of αLA, DHA, and LA in the HFD. In the HFD, palmitic and oleic acid were the predominant FAs (57% of total diet), whereas in the control diet LA was most abundant. 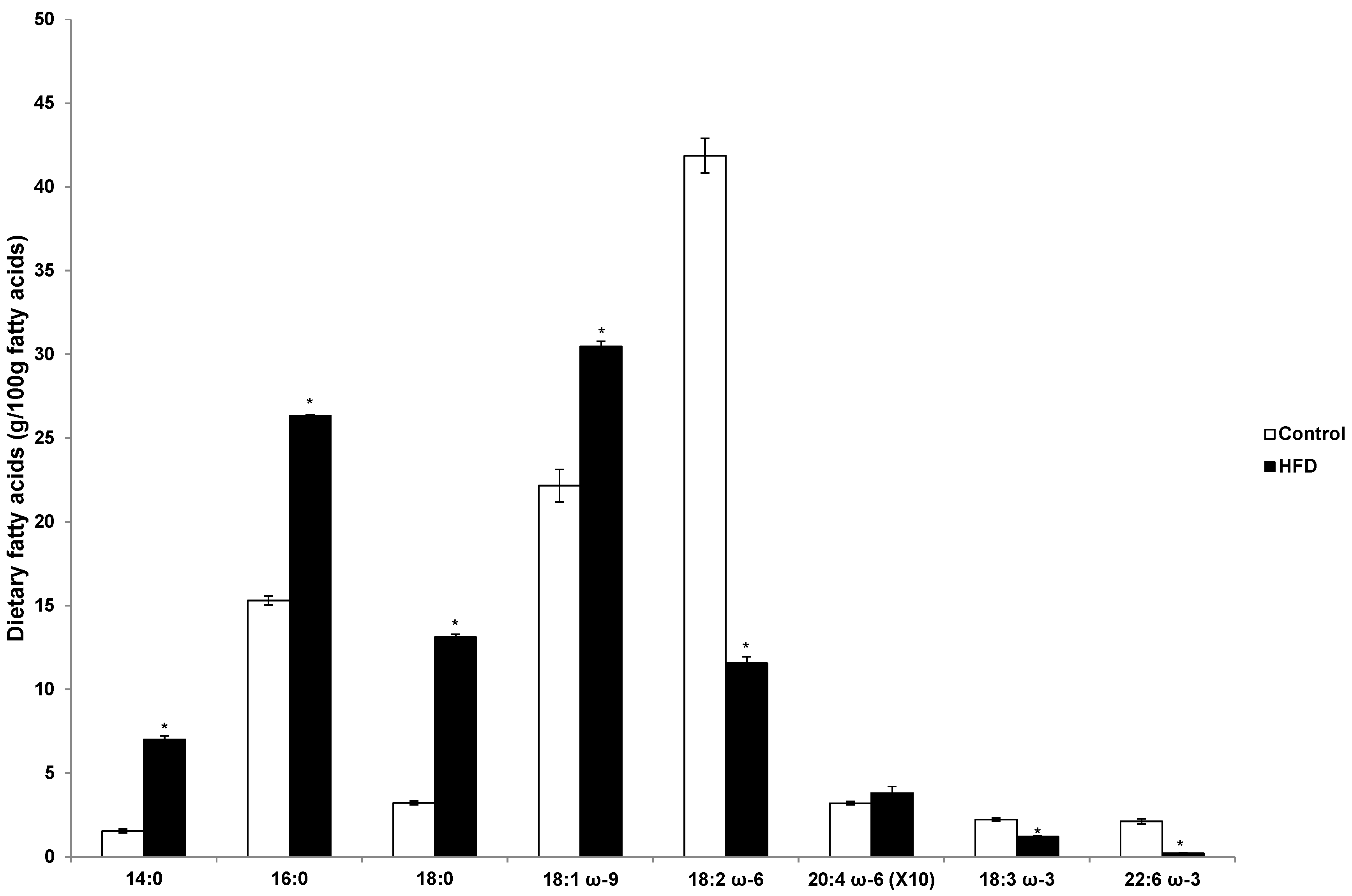 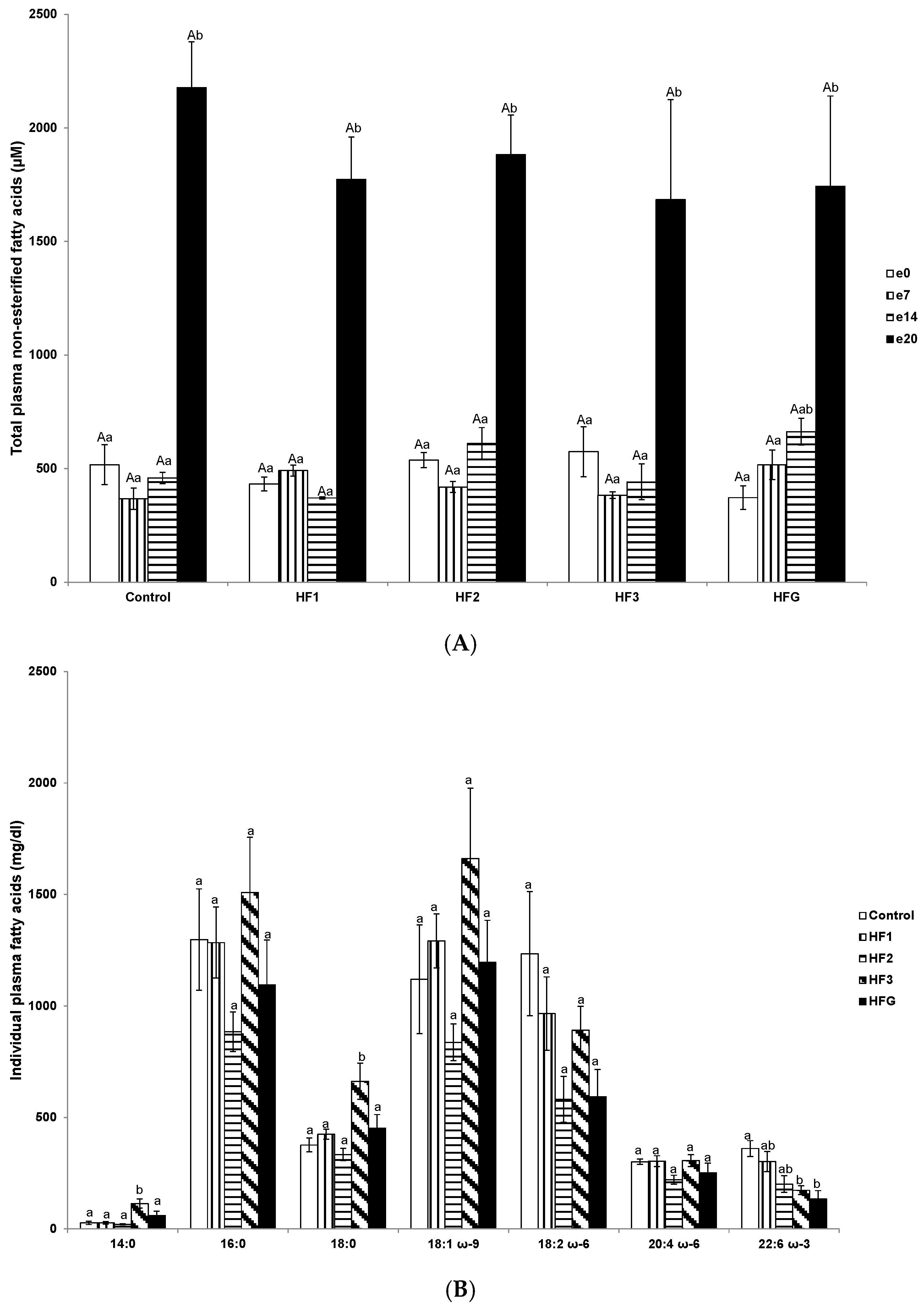 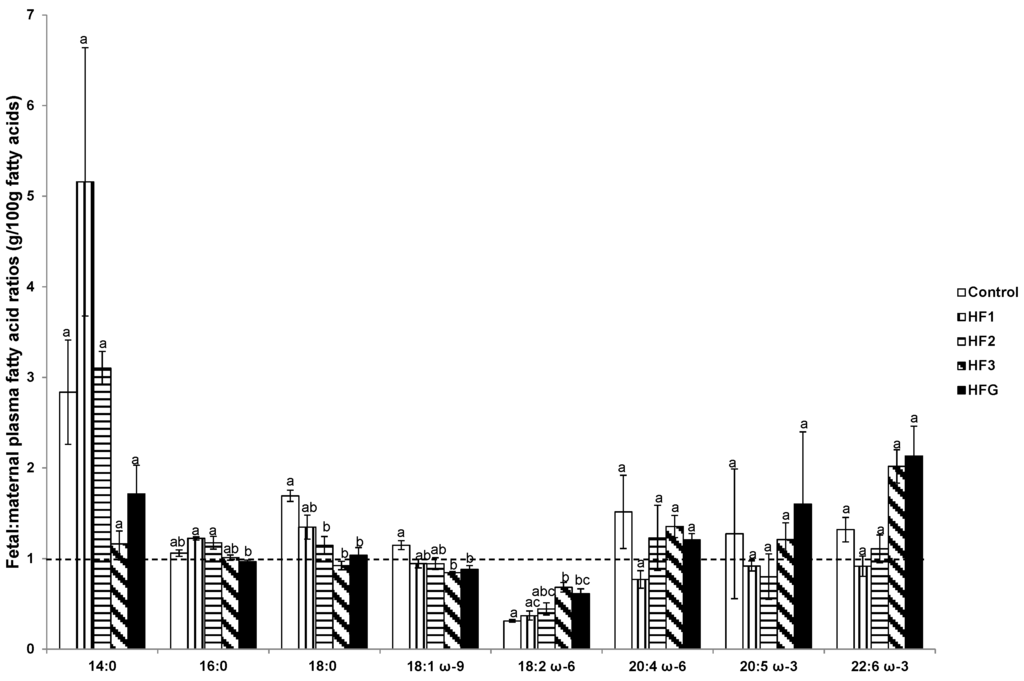 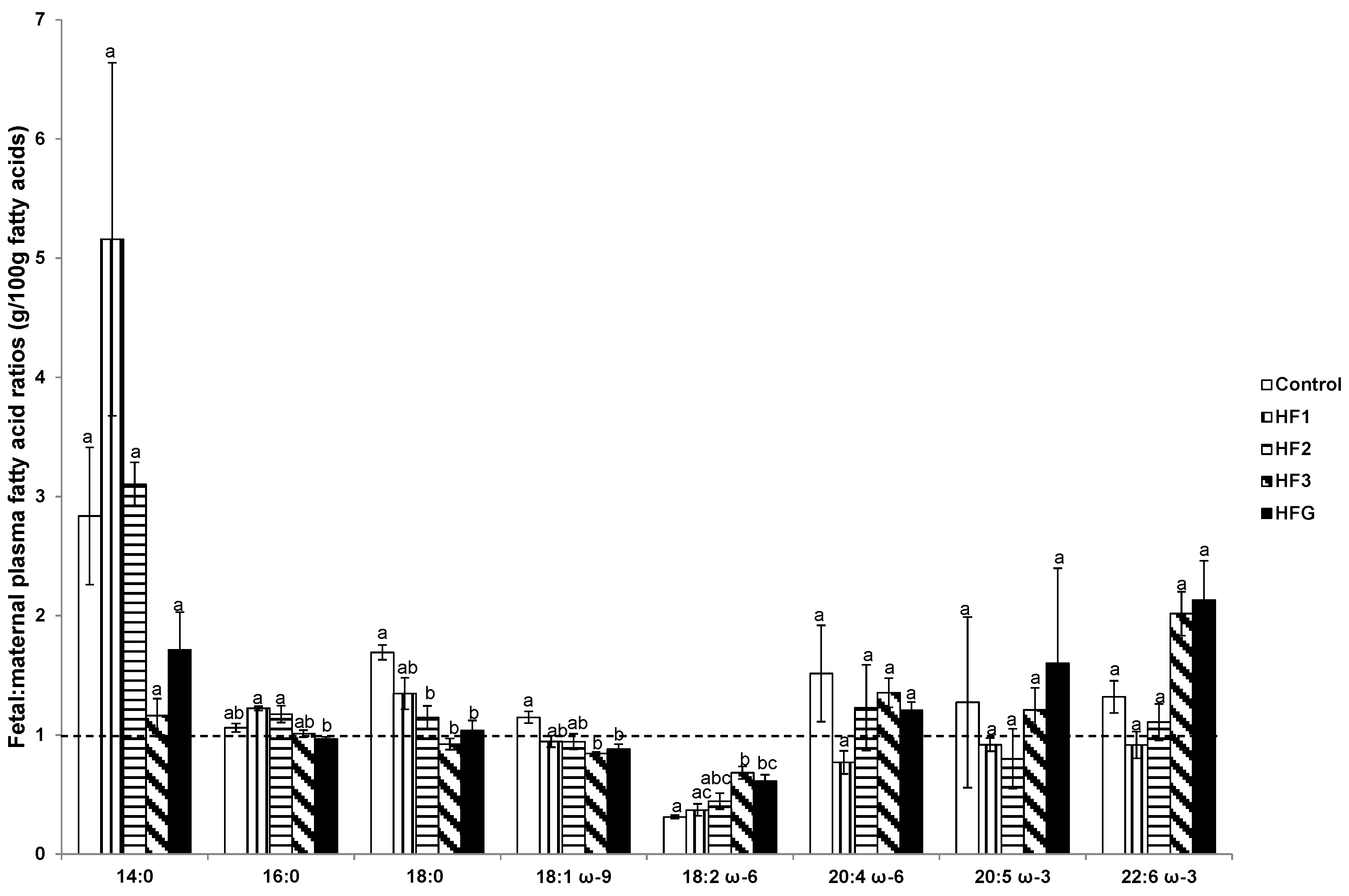 Although the fetal:maternal ratio of most FAs did not exceed 1, the DHA ratios in the HF3 and HFG groups were increased ~two-fold, albeit non-significant. The plasma AA:LA ratio in either the fetuses or the mothers did not differ between the different groups, but values were consistently higher in fetuses than in mothers in all groups (Table S4). 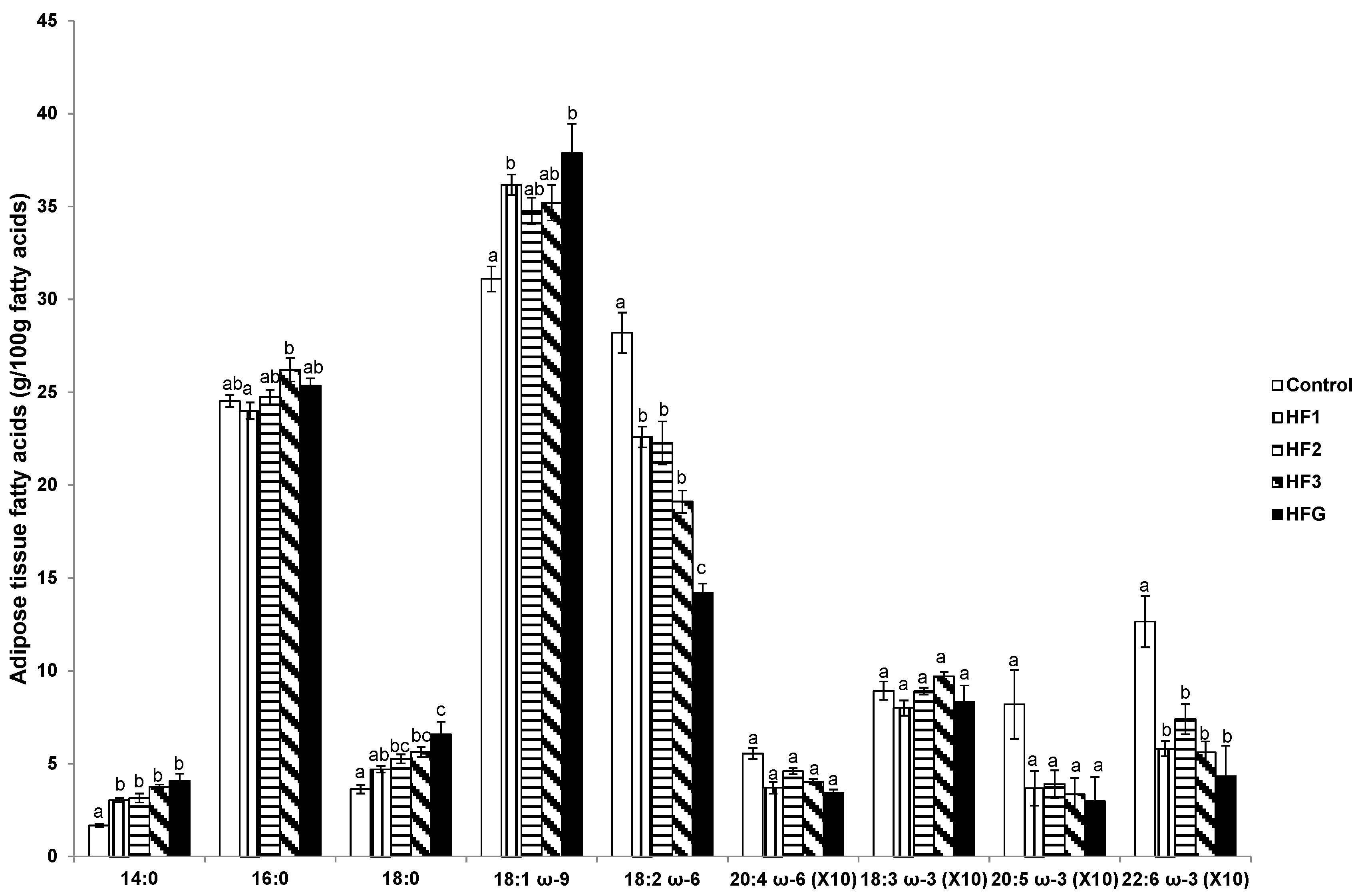 Mothers maintained on a HFD for the final week of gestation or throughout gestation had reduced DHA in plasma, liver, adipose tissue, and placenta. Altered circulating and hepatic FA profiles, particularly saturated FA elevation, and reduced key ω-3 and ω-6 PUFA, coinciding with the compromised maternal metabolic state of pregnancy, reflects altered lipid metabolism that may have adverse health outcomes. Low DHA maternal availability in rats fed the HFD may up-regulate its placental transfer or stimulate its fetal synthesis from its EFA precursor thereby allowing the maintenance of a higher proportion in fetal plasma relative to maternal plasma. Therefore, maternal intake of a HFD during the critical stage of peak fetal development should be avoided for stabilizing lipid profiles to promote healthy outcomes in mothers and their fetuses.

The authors extend their gratitude to Milagros Morante and Christo Muller for their expert technical assistance and the National Research Foundation of South Africa for funding. The study was also supported by a grant from Fundación Ramón Areces of Spain (grant CIVP16A1835).