Effect of Glycemic Index of Breakfast on Energy Intake at Subsequent Meal among Healthy People: A Meta-Analysis
Previous Article in Special Issue

Selenium (Se) is a trace element which plays an important role in adipocyte hypertrophy and adipogenesis. Some studies suggest that variations in serum Se may be associated with obesity. However, there are few studies examining the relationship between dietary Se and obesity, and findings are inconsistent. We aimed to investigate the association between dietary Se intake and a panel of obesity measurements with systematic control of major confounding factors. A total of 3214 subjects participated in the study. Dietary Se intake was determined from the Willett food frequency questionnaire. Body composition was measured using dual-energy X-ray absorptiometry. Obese men and women had the lowest dietary Se intake, being 24% to 31% lower than corresponding normal weight men and women, classified by both BMI and body fat percentage. Moreover, subjects with the highest dietary Se intake had the lowest BMI, waist circumference, and trunk, android, gynoid and total body fat percentages, with a clear dose-dependent inverse relationship observed in both gender groups. Furthermore, significant negative associations discovered between dietary Se intake and obesity measurements were independent of age, total dietary calorie intake, physical activity, smoking, alcohol, medication, and menopausal status. Dietary Se intake alone may account for 9%–27% of the observed variations in body fat percentage. The findings from this study strongly suggest that high dietary Se intake is associated with a beneficial body composition profile. View Full-Text
Keywords: dietary selenium intake; body composition; confounding factors; adult population dietary selenium intake; body composition; confounding factors; adult population
►▼ Show Figures 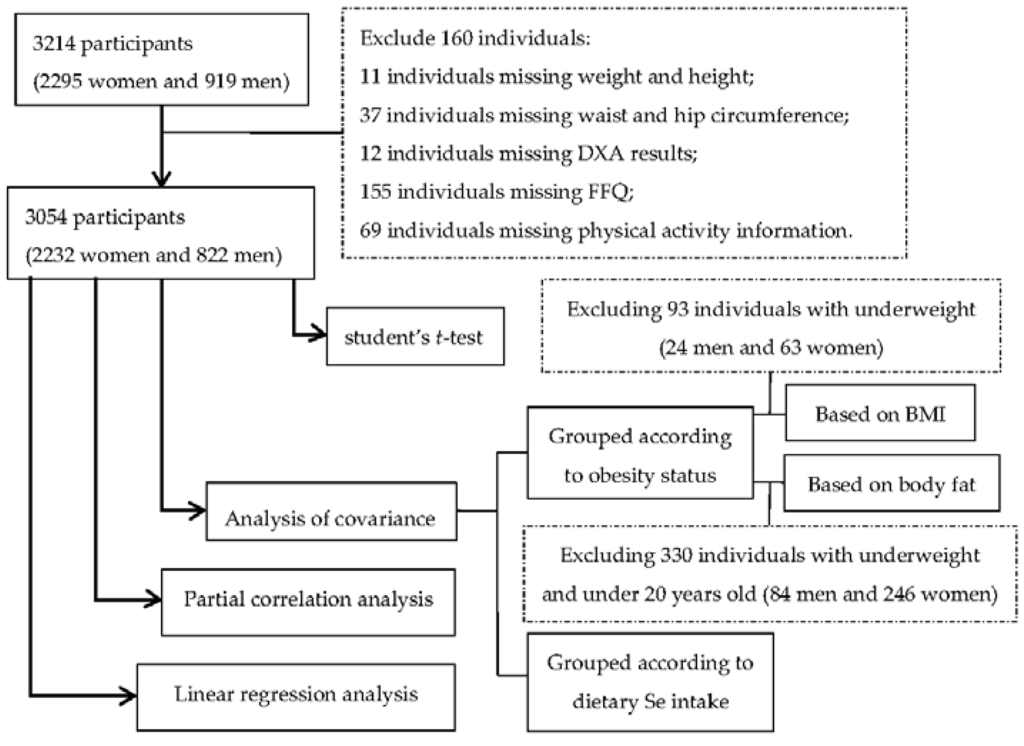