Ageing is characterised by changes in body composition, including decreased muscle mass, or sarcopenia, and an accompanying increase in fat mass [1,2,3,4,5,6]. Sarcopenia, defined as a skeletal muscle of less than two standard deviations (SD) of the mean for young persons, is associated with loss of strength and function and has been linked to a 3–4 fold increased risk of disabilities, falls, functional impairment, loss of independence and a decreased quality of life [2,7,8,9,10]. The proportion of people estimated to be affected by sarcopenia ranges between 5 to 13% in persons aged 60 to 70 years and 11 to 55% in persons aged 80 years and above [6]. In 2000, the estimated direct health care expenses related to sarcopenia was estimated to be $18.5 billion in the United States, placing an immense strain on the health care system [11,12].
Measurements of body composition are strong determinants of functionality and mortality in older adults [13]. Adiposity, measured by a percentage of body fat, has been shown to exacerbate the age-related decline in physical function [5,14]. It is estimated that after 20 years of age, fat-free mass progressively decreases, while fat mass increases, with a maximal fat mass reached around 60 years of age [5].
The healthy weight range for adults over 65 years of age is a body mass index (BMI) between 22 and 27 kg/m2, whereas a BMI exceeding 30 kg/m2 is associated with increased functional disability and reduced physical performance, in particular mobility, when compared to lean adults of the same age [5,15]. Conversely, significant weight loss and a low BMI (BMI < 22 kg/m2) is also associated with a decline in physical function and physical performance in the aging population including low appendicular muscle mass, suboptimal grip strength and slow walking speeds [14,16]. An increase in mortality risk in older adults with a BMI < 23 kg/m2, but not in the overweight group with a BMI > 27 kg/m2, was also shown in a recent meta-analysis [17].
BMI is commonly used to assess body composition as it is easily measured and does not require costly equipment. However, it should be used with caution as it is unable to distinguish between quantities of fat mass and muscle mass and for any given value of BMI, the ratio of fat mass to muscle mass may vary [5,14]. Therefore, measurements of body composition in terms of muscle mass and muscle strength, are thought to provide a more accurate reflection of physical function and ability [14].
The loss of muscle mass is one of the prominent changes in body composition that occurs with aging and is associated with a deterioration in physical function and performance [15,18]. However, while losses in muscle mass have been shown to impact physical performance [19], muscle strength has been found to decline more rapidly with age than muscle mass and is more strongly associated with physical dysfunction, functional limitations and mortality [7,13].
Muscle strength and endurance are essential for performing activities of daily living and participating in physical activity. Strength has been shown to be diminished in persons whom are not regularly active and a loss of strength predicts an increased risk of physical dysfunction and disability in older adults [16]. This highlights the importance of maintaining a physically active lifestyle in slowing the progression of muscle strength deterioration that occurs with age. Being physically active can also contribute to a reduced risk of developing obesity, hypertension, diabetes mellitus, heart disease and osteoporosis [4]. As it is difficult to regain muscle tissue and strength once it has been lost, prevention of this process becomes paramount for older people to maintain independence with activities of daily living and a higher quality of life [7,13].
Given the increase in functional impairment and disability in the growing older population, it is important to understand how body composition may impact upper body strength and physical function in older adults before they become frail. We hypothesize that in healthy independently-living older adults, a lower lean body mass will be associated with lower upper body strength and poorer outcomes in tests of endurance and lower extremity performance.

One hundred and seventeen men and women were recruited from independent living community-dwellings across the lllawarra and Southern Highlands’ area of New South Wales, Australia, between 2010 and 2014. Recruitment strategies included letter box drops, distribution of flyers in common rooms and information sessions held at residential facilities. Participants were required to be at least 55 years old and have a good understanding of English. Ineligibility criteria included uncontrolled hypertension, unstable type 1 diabetes, having a pacemaker, severe dementia or dysphasia, a physical disability that limits walking or dependency on others for activities of daily living, cognitive impairment and/or food allergies.
The study was approved by the University of Wollongong Human Research Ethics Committee (HE15/178) and written consent was obtained from all participants prior to taking part in this study.

Upper body strength (kg) was measured using a hand dynamometer (Model Jamar Plus, Sammsons Preston Rolyan, Bolingbrook, IL, USA). Participants were asked to sit in a chair, feet flat on the floor with their dominant arm adducted with their elbow at a 90 degree angle. On the count of three, they were instructed to exert maximal force for 10 s before releasing. Hand-held dynamometry has good test-retest reliability and concurrent validity in older community dwelling persons [20].
The 30-s sit-to-stand (STS) test was used to measure lower body extremity performance and assessed the participant’s ability to stand up from a chair without the use of their arms. The participants started from a seated position in a chair with their arms folded across their chest and were instructed to stand fully upright and return to the seated position as many times as they could manage comfortably in 30 s. The final score was the number of stands completed in 30 s. The 30-s sit-to-stand test has demonstrated good test-retest reliability and provides a valid indication of lower body strength in generally active, community-dwelling older adults [21].
The timed up and go test was used to measure both lower extremity performance and dynamic balance performing three common functional activities such as standing up from a chair and walking and turning through the evaluation of mobility [22]. For this test, participants were required to stand up from the chair, walk 3 m at a comfortable speed, turn around and walk back to the chair and sit down. The final score was the time taken to complete this task. The timed up and go test provides a valid indication of lower extremity functional ability in generally active, community-dwelling older adults and has good test-retest reliability [22].
The 6-min walk test was used to measure endurance. This test required the participants to walk a 10 m course at a comfortable speed for 6 min using walking frames or aides normally used, if required for daily living. The number of laps completed during the 6 min were tallied to calculate the total distance in meters walked. The 6 min walk test has good test-retest reliability and provides a clinically valid measure of endurance in an older population [23].

Dietary intake was measured by asking participants to keep a food record (n = 47) for 3 consecutive days (one weekend day and two weekdays) or from a 24 h recall (n = 69). These were analysed using FoodWorks using NUTTAB 2010, Ausfoods 2012 and Ausbrands 2012 database (Xyris Software, Highgate Hill, GLD, Australia, Version 6, 2009). A random cross check of 10% of the food records was conducted by two fieldworkers for quality control and to check accuracy.
The Mini Nutritional Assessment (MNA®) [24], a validated questionnaire designed for use in persons aged 65 years and above, was conducted by a trained researcher to determine overall nutritional status for the purpose of describing the sample, with regard to generalizability of the results. A score > 23.5 out of a possible 30 indicates that an individual is well-nourished; a score between 17 and 23.5 indicates that the individual is at risk of malnutrition, and a score < 17 indicates that is individual is malnourished.

The Minnesota leisure time physical activity questionnaire (MLTPA) was used to assess habitual physical activity over the last year [25]. An intensity measure was allocated to 64 activities, ranging from 2.0 for light to 6.0 for heavy intensity. Participants were required to record their participation in various activities over the last 12 months, as well as the months involved, the frequency each month and the time per session. Results were reported as total Activity Metabolic Index (AMI)/week calculated as activity intensity code × duration × times per month × months per year/52. 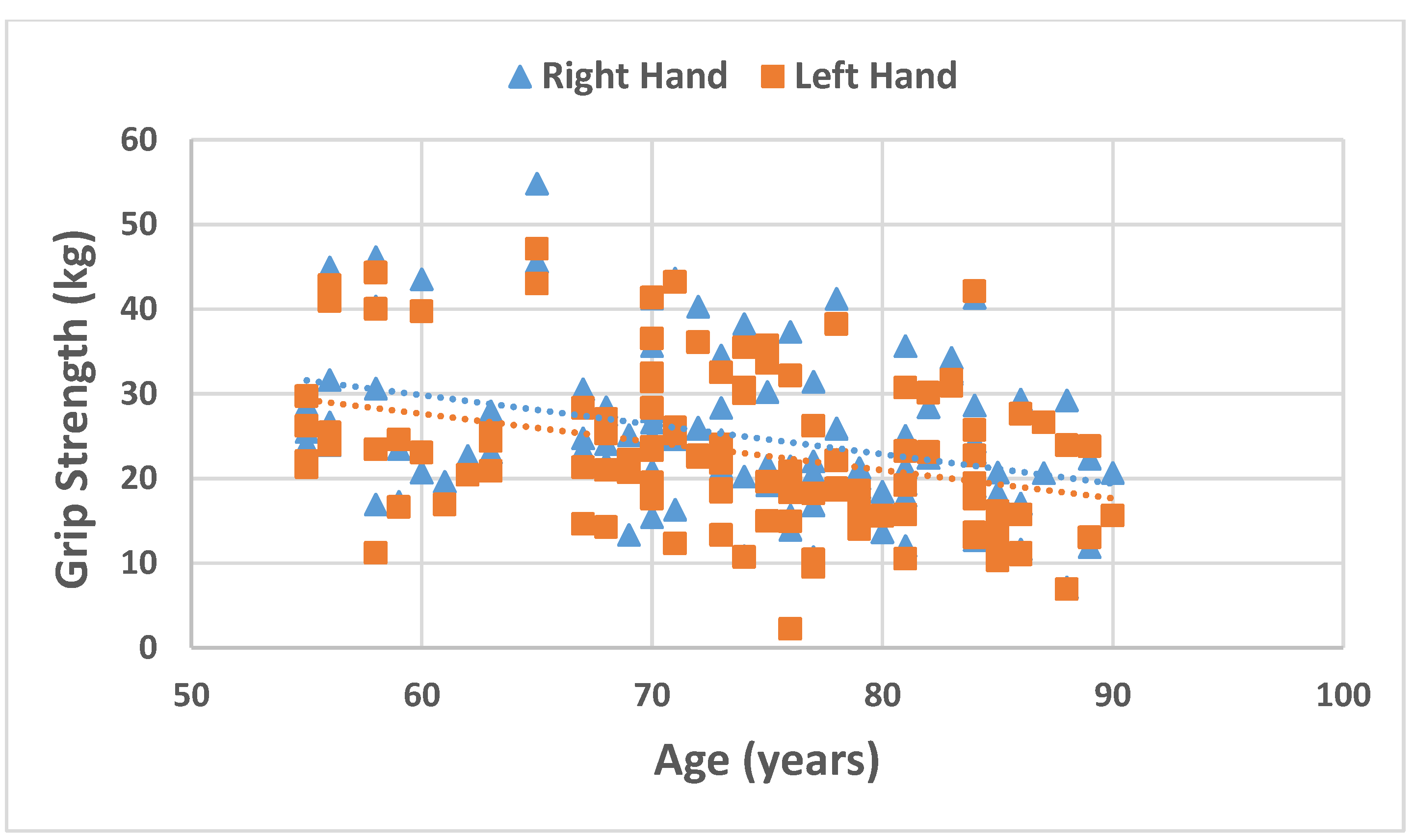 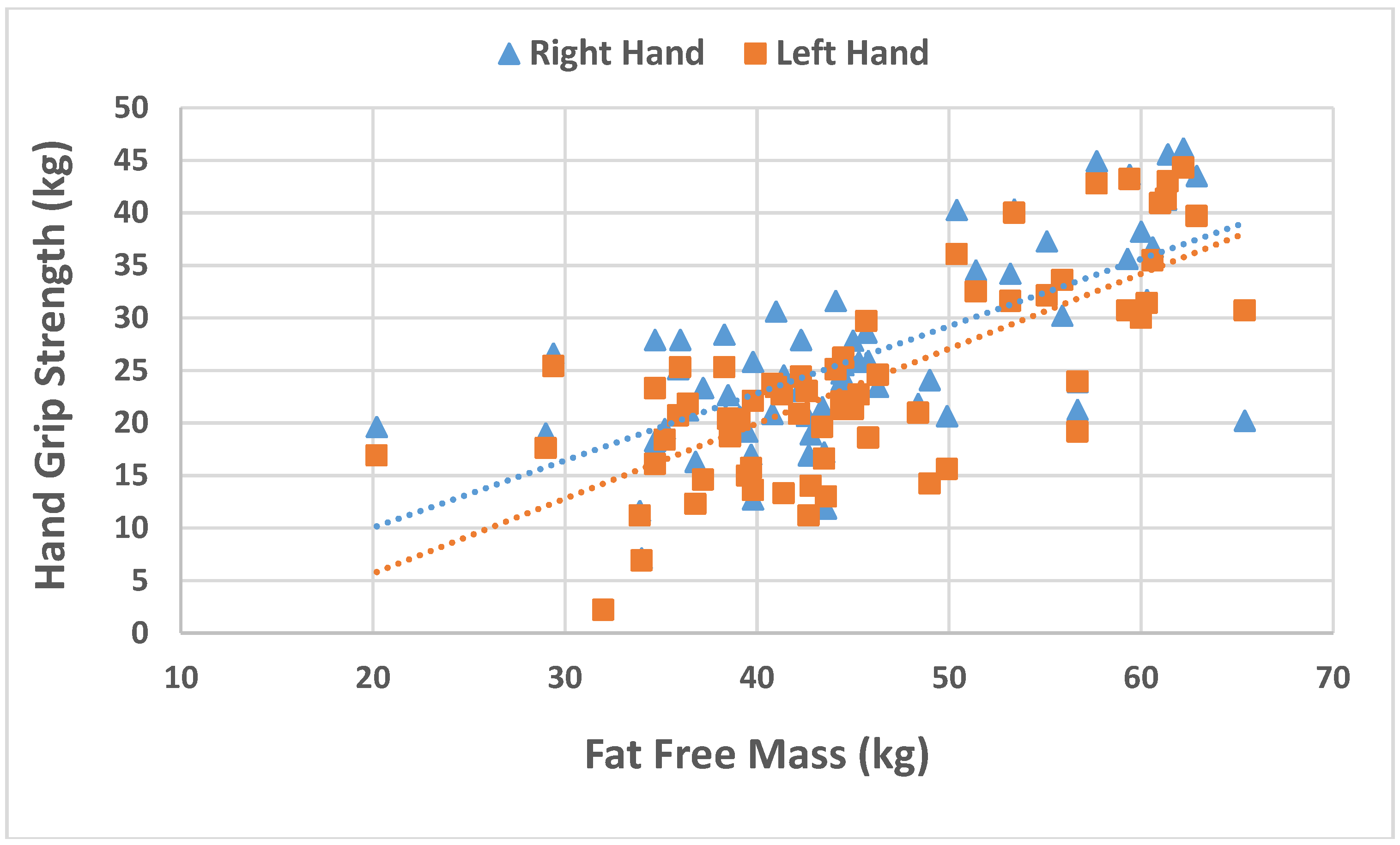 Lean body mass was the most important predictor of upper body strength, controlling for habitual physical activity and dietary protein intake. Excess fat mass, expressed as a proportion of body weight, was found to be detrimental for upper body strength, as well as lower extremity performance and endurance. Interventions aimed at monitoring and improving the nutritional status and dietary intakes of older adults may prevent the decline in physical function with age and improve independence. Also, interventions aimed at reducing fat mass and increasing fat-free mass may help slow the decline in strength and physical function seen with age. Longitudinal studies would be beneficial to investigate how body composition, strength, functional exercise performance and nutritional status changes with age and to identify factors that can influence and maintain these characteristics over time to help improve the independence and quality of life for the older population.

Some of the participants were recruited for a 12-week intervention study funded by the Pork Co-Operative Research Centre (ANZCTR # 12615000585527) and their baseline data was included for the current analysis.