The Effects of Supplementation with a Vitamin and Mineral Complex with Guaraná Prior to Fasted Exercise on Affect, Exertion, Cognitive Performance, and Substrate Metabolism: A Randomized Controlled Trial
Previous Article in Special Issue

Dietary assessment, while traditionally based on pen-and-paper, is rapidly moving towards automatic approaches. This study describes an Australian automatic food record method and its prototype for dietary assessment via the use of a mobile phone and techniques of image processing and pattern recognition. Common visual features including scale invariant feature transformation (SIFT), local binary patterns (LBP), and colour are used for describing food images. The popular bag-of-words (BoW) model is employed for recognizing the images taken by a mobile phone for dietary assessment. Technical details are provided together with discussions on the issues and future work.
Keywords: mHealth; food record; image processing; pattern recognition; food image mHealth; food record; image processing; pattern recognition; food image

The BoW model was originally devised for text classification [13]. In the model, a text document is encoded by a histogram representing the frequency of the occurrence of codewords. The codewords are predefined in a discrete vocabulary referred to as a codebook. The codeword histograms obtained from training samples (small collections of text documents) are used to train a discriminative classifier, e.g., Support Vector Machine (SVM) [14]. The trained classifier is then used to classify test documents (larger collections of text).
To automate the food record, the BoW model was applied for classification of food images captured using a person’s mobile phone. In this task, the features of an image are used as codewords. The images employed in this study, are the photographs of foods recorded as part of the food record method. Rather than recording the text-based name of the food risking poor quality detail about the food due to long food selection lists, incorrect spelling or typographical errors, a photograph can provide additional details about the foods. Using photographs also provides the potential to minimize the burden on the person completing the dietary assessment. The food image classification method in this study was implemented in C++ programming language. The training phase and evaluation of the food image recognition were conducted on a desktop computer using Microsoft Windows 7.0. The prototype was deployed on a Smartphone using the Android mobile operating system.
Image classification using the BoW model requires feature selection, codebook creation, discriminative training. In the following sections, each of these components is described in further detail.

For the purpose of image recognition, the features are used to describe the visual properties of the foods in the photographs. In this study, we investigated three common types of features including Scale Invariant Feature Transformation (SIFT) [15], Local Binary Pattern (LBP) [16], and Colour [17]. SIFT [15] is used to describe the local shape of visual objects. It is constructed by a histogram of the orientations of edges in the food photographs. LBP [16] is used to capture the texture information of the foods. The LBP is known for its simplicity in implementation, low computational complexity and robustness under varying illumination conditions. Colour [17] plays an important role in food image classification, e.g., the red colour of a tomato is useful to distinguish it from an apple sharing a similar shape. In our experiments, we quantise each colour channel (Red, Green, and Blue) of an image pixel into four bins (intervals). The colour features of an image then can be constructed as the histogram of the colour of all pixels in that image.

Suppose that there are food categories (e.g., carrots, muscle meat, etc.) and is the set of training images. The SIFT interest point detector of Lowe [15] was invoked to detect interest points on the training images of . SIFT [14] and LBP [15] features were then extracted at interest points. Let be the -dimensional features extracted at interest points . These features were then clustered into groups using a K-means algorithm. Idendennn clustering, the dissimilarity (based on distance) between two features was computed using a metric, e.g., distance (as in our implementation). Equation (1) outlines the dissimilarity between features as follows, where is the -th element of .
Completion of this step resulted in a codebook in which codewords were considered to be the centres of the i’th clusters.

To classify food categories, binary classifiers were used. Each classifier classified a given test sample (food image in this context) into two classes: or non-. Given a food image and codebook , the SIFT interest point detector was used to detect a set of interest points from the food image. Let and be an interest point and the feature extracted at . The best matching codeword was determined as outlined in Equation (2), where is defined in Equation (1).
Figure 1 provides an example of describing a food image by codewords. In this figure, the red points are SIFT interest points, where are the best matching codewords of the features extracted at each of these interest points. The food image was then encoded by a histogram of occurrence of the codewords. Such histograms were collected from all training images of the food category i’th and from the training images of other categories to train the classifier . In our implementation, SVMs were used as classifiers for . 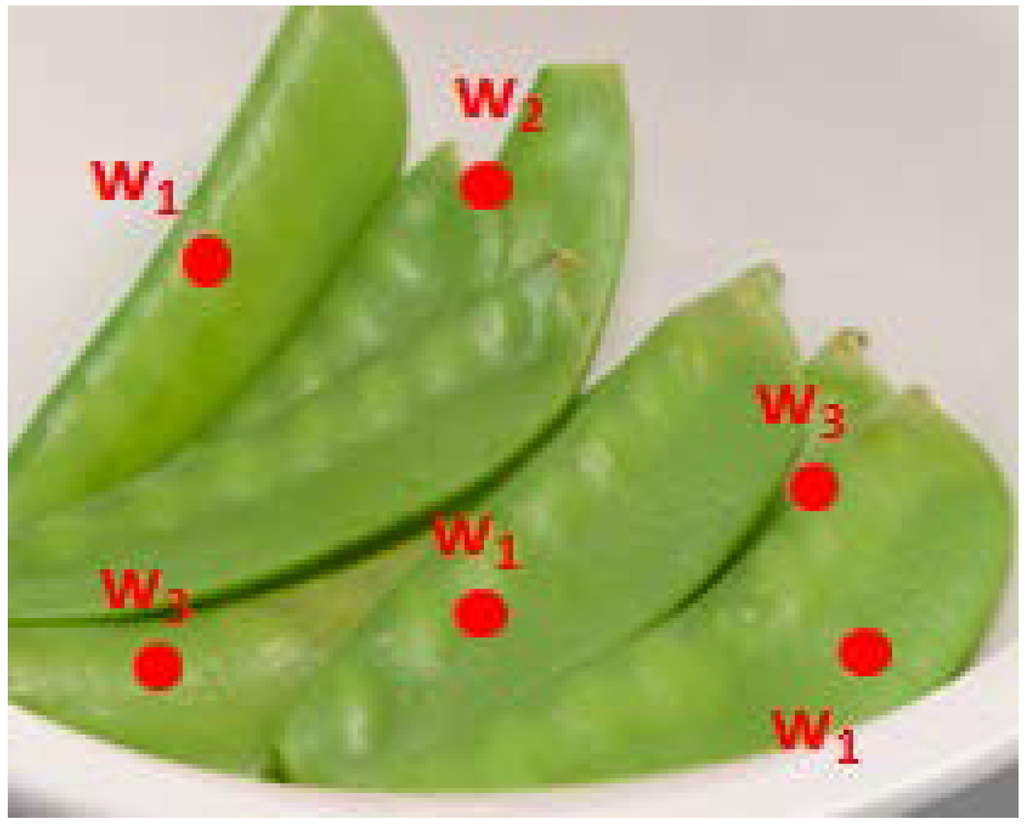 Given a test image, , similar to the training phase, the histogram of the occurrence of the codewords obtained on was computed and denoted as . Let be the classification score of the trained classifier applied on . If the image contains only one food category, this food category was determined as shown in Equation (3)
If contains more than one food category (such as for a meal on a plate), the food category was considered to be present in if , where is a user-defined threshold, referred to as recognition sensitivity.

Table 1. Processing time of interest point detectors.
† Obtained without resizing the input image.
The ezSift interest point detector was found to be the fastest detector with less than 15 s. The number of interest points generated by this detector was less than that generated by other detectors, likely due to a lower number of scales used in the ezSift detector. However, the number of detected interest points was usually sufficient for recognition as this has been found empirically. The study also found that the zerofog had been optimized using openmp to run on parallel processors.
To describe the appearance of food images, three codebooks corresponding to three different feature types were created for each food category. The codebook size (i.e., the number of codewords) for the SIFT, LBP, and colour feature was 100, 40, and 50, respectively. To combine the three features, for each food image, three histograms of codewords corresponding to the three codebooks were concatenated to form a longer histogram. Linear SVMs [18] were employed as classifiers.
The food image classification method was evaluated on a newly created dataset [19,20,21]. Table 2 summarises the dataset used in the evaluation. Note that in this dataset, one food image may contain more than one food category (see Figure 2). The dataset was organised so that the training sets (used during codebook creation) and test sets were separated.

Table 2. Summary of the dataset used for training and testing of the food image recognition method. Positive images of a food category indicate the number of images contained in each food category. 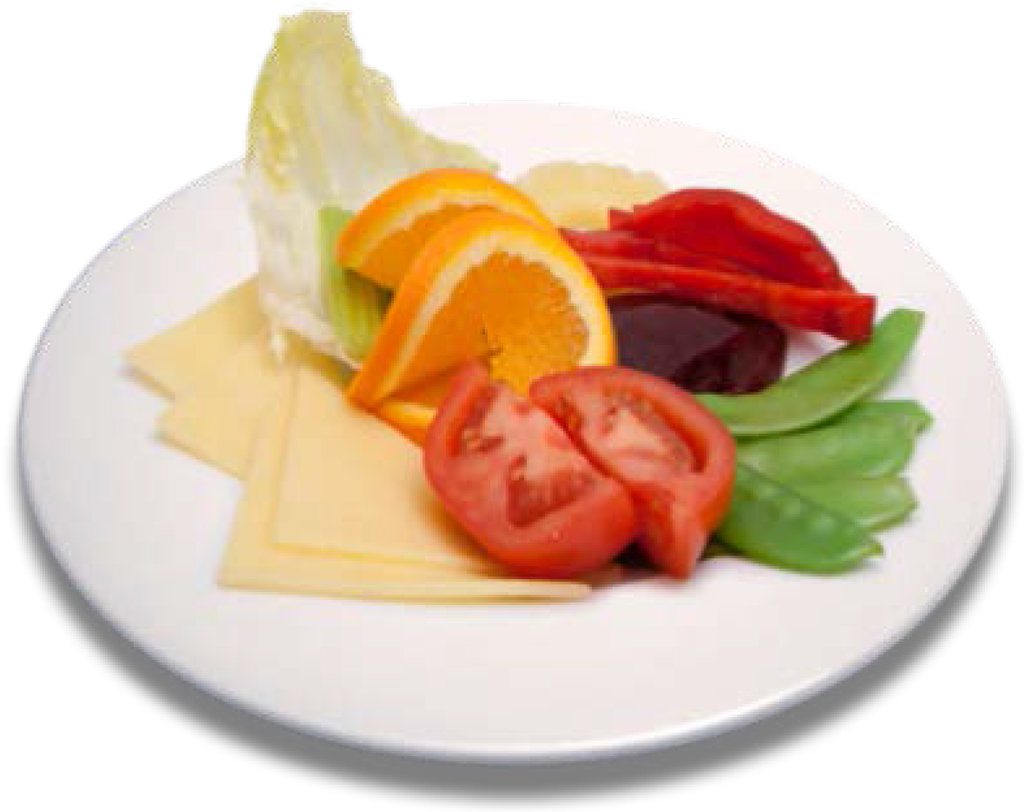 A prototype of an automated dietary assessment on mobile devices has been described in this paper. Various challenges have been identified through this progressive step with future work continuing to address these challenges. Challenges faced were similar to existing studies [7] in this field with colour and multiple food items being of particular focus. As shown in Table 3, on average, the LBP outperformed both the SIFT and colour histogram and the SIFT gave the poorest performance overall. The combination of all features (SIFT, LBP and Colour) gave a better performance overall as anticipated due to the various advantages and disadvantages of each feature. One particular note was for the “Cheese” category, where the accuracy was low. This was likely due to the presence of other food types in the same image with cheese. The accuracy could be improved if the “Cheese” items could be captured at a closer distance, i.e., outliers and other food items other than cheese are not present in the image.
In the current implementation, linear SVMs were used. More sophisticated SVMs such as radial basis function (RBF) and polynomial kernel SVMs often gain better performance. Thus, those kernel types will be implemented, tested, and compared with the linear kernel in future studies. In addition, some advanced machine learning techniques, e.g., deep learning [22], extreme learning [23], will also be considered to improve the recognition accuracy. These techniques are recent developments in the area of pattern recognition.
Since multiple food types can co-occur on the same image, extracting individual food items would help to improve the recognition accuracy. Therefore, the aim is to simultaneously detect and recognise food as for future work. The accuracy of the food image recognition may also be improved if the classifiers were trained on large and diverse datasets including various illumination conditions, complex background, food images captured at various viewpoints. More challenging datasets with more food categories have been collected and will be released in our future work.

Applying image processing and pattern recognition techniques on a mobile device has allowed for the development of an automated food record via the use of a Smartphone. Continuing the prototype developed in this study to the subsequent stages of the food record, namely portion identification and translation to nutrient data, will complete the process and allow for a practical user-friendly approach to dietary data collection within the Australian context. It is vital that the mapping of food images to their corresponding food items within a food composition database is performed carefully to allow for the most accurate output data to be provided. Development of applications for the use in dietetic practice needs to encompass the inherent bias of the underpinning method of dietary assessment. They should also consider the advancements in technology to potentially reduce some of these biases. This will provide impetus for more robust dietary assessment processes that are streamlined in their methods but also less resource intensive in their nature. Considering these two concepts together will mean that nutrition researchers or clinicians in practice can spend additional time with the clients working on behaviour changes for better health rather than data entry and nutrient analysis as was previously the case. Embracing credible and suitably selected technologies to work within the existing nutrition care processes should be considered to the advantage of both the clients and clinicians. The work of this study is one of the first of this nature in the Australian context.

YP conceived the initial project idea, sourced funding support and contributed the initial test images and main proportion of training images to the dataset. DT and WL performed the experiments to refine the image recognition algorithm from the original Bag-of-Words model and MT assisted with transferring the developed algorithm to Android, testing and intensive experimentation on Android. DT, WL contributed to the analysis of the data and all authors contributed to the writing and editing of the manuscript.