Collecting accurate and reliable nutritional data from adolescent populations is challenging, with current methods providing significant under-reporting. Therefore, the aim of the study was to determine the accuracy of a combined dietary data collection method (self-reported weighed food diary, supplemented with a 24-h recall) when compared to researcher observed energy intake in male adolescent soccer players. Twelve Academy players from an English Football League club participated in the study. Players attended a 12 h period in the laboratory (08:00 h–20:00 h), during which food and drink items were available and were consumed ad libitum. Food was also provided to consume at home between 20:00 h and 08:00 h the following morning under free-living conditions. To calculate the participant reported energy intake, food and drink items were weighed and recorded in a food diary by each participant, which was supplemented with information provided through a 24-h recall interview the following morning. Linear regression, limits of agreement (LOA) and typical error (coefficient of variation; CV) were used to quantify agreement between observer and participant reported 24-h energy intake. Difference between methods was assessed using a paired samples t-test. Participants systematically under-reported energy intake in comparison to that observed (p < 0.01) but the magnitude of this bias was small and consistent (mean bias = −88 kcal·day−1, 95% CI for bias = −146 to −29 kcal·day−1). For random error, the 95% LOA between methods ranged between −1.11 to 0.37 MJ·day−1 (−256 to 88 kcal·day−1). The standard error of the estimate was low, with a typical error between measurements of 3.1%. These data suggest that the combined dietary data collection method could be used interchangeably with the gold standard observed food intake technique in the population studied providing that appropriate adjustment is made for the systematic under-reporting common to such methods. View Full-Text
Keywords: energy intake assessment; food diaries; 24-h recall; football; adolescent; male energy intake assessment; food diaries; 24-h recall; football; adolescent; male
►▼ Show Figures 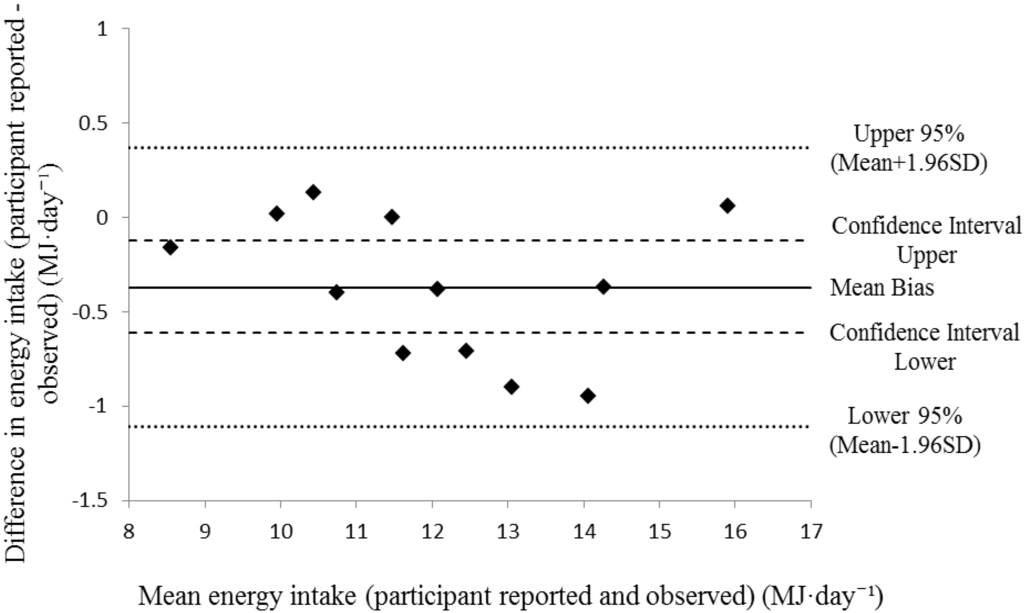