:
This study analyzed the effects of caffeine intake on whole-body substrate metabolism and exercise tolerance during cycling by using a more individualized intensity for merging the subjects into homogeneous metabolic responses (the workload associated with the maximal lactate steady state—MLSS). MLSS was firstly determined in eight active males (25 ± 4 years, 176 ± 7 cm, 77 ± 11 kg) using from two to four constant-load tests of 30 min. On two following occasions, participants performed a test until exhaustion at the MLSS workload 1 h after taking either 6 mg/kg of body mass of caffeine or placebo (dextrose), in a randomized, double-blinded manner. Respiratory exchange ratio was calculated from gas exchange measurements. There was an improvement of 22.7% in time to exhaustion at MLSS workload following caffeine ingestion (95% confidence limits of ±10.3%, p = 0.002), which was accompanied by decrease in respiratory exchange ratio (p = 0.001). These results reinforce findings indicating that sparing of the endogenous carbohydrate stores could be one of the several physiological effects of caffeine during submaximal performance around 1 h.
Keywords:
fat metabolism; submaximal performance; muscle glycogen; endurance

The ergogenic effects of caffeine on endurance performance are now well established [1,2]. A wide variety of mechanisms have been proposed to explain such effects in the human body, which ranges from increased reliance on fat metabolism [3,4,5], attenuation of the rate of muscle glycogenolysis [3,6], and alterations in central neurotransmitters or neuromuscular function [7,8]. However, measurements of substrate utilization by indirect calorimetry during whole-body exercises occasionally fails to support the theory of enhanced fat oxidation [1,2,9], leading to the notion that caffeine ingestion has minimal effects on the metabolism in working muscles [9].
In the majority of studies, a protocol of exercise tolerance at a given percentage of maximal oxygen uptake (V̇O2max) was used, which has been shown to have similar sensitivity to that of time-trials for changes in endurance [10]. However, despite being the most widely used exercise intensity index, a given percentage of V̇O2max is possibly not the best functional definition. This is because the parameters that discriminate between selected ranges or clusters of similar metabolic response characteristics (i.e., lactate threshold, maximal lactate steady state (MLSS), and V̇O2max) have highly variable relationships among each other in different individuals [11,12]. In other words, assigning exercise intensities based on percentage of V̇O2max could actually lead participants to undergo distinct exercise intensity domains, yielding markedly different physiological strain characteristics. Thus, merging such responses from different participants into a single average could be misleading with respect to inferences about the effect of caffeine intake on metabolism.
On the other hand, the blood lactate response during exercise is recognized as a better predictor of endurance performance than V̇O2max [13]. Furthermore, the blood lactate response is a widely used tool for estimating relative exercise intensity and the metabolic responses at submaximal exercise intensities [14,15]. MLSS represents the highest intensity that can be performed in the absence of progressively increasing in blood lactate concentrations (BLC), which means that the oxidative energy metabolism accounts for the energy provision in active muscles [14]. Indeed, MLSS does not indicate only a given workload but rather an exercise intensity above which metabolism changes qualitatively; the transition from aerobic to partly anaerobic metabolism as indicated by continuing net lactate increase [16]. Additionally, exercise tolerance at MLSS has shown a large negative correlation with the percentage of the energy derived from carbohydrates [17]. This latter result is consistent with the notion that MLSS is highly dependent on carbohydrates metabolism [14,15]. Therefore, in comparison to a given exercise intensity related to V̇O2max, exercising to exhaustion at the intensity corresponding to MLSS appears as a more individualized strategy to assess effects of caffeine under a given metabolic situation during submaximal exercise.
Since carbohydrate combustion has proven decisive for exercise tolerance at MLSS workload, some sparing of the endogenous carbohydrate stores by an increased reliance on fat oxidation may help explain the ergogenic effects of caffeine intake on exercise tolerance. Thus, the aim of the present study was to analyze the effects of caffeine ingestion on physiological response and exercise tolerance during cycling at MLSS.

This study was a randomized, double-blind, crossover trial with two arms: Placebo and caffeine. Participants completed five to seven laboratory test sessions on separate days within a 3-week period: An initial incremental test to determine the peak power and V̇O2max, two to four constant workload exercise bouts to determine MLSS, and two exercise bouts until exhaustion at MLSS in each condition (i.e., caffeine or placebo). During the last two trials, a set of physiological and metabolic responses were compared between treatments at specific time points to evaluate the effects of caffeine intake on MLSS.

Eight physically active male ranging in age from 20 to 31 years, with an average height of 176 cm (range: 169–193 cm) and an average body mass of 77 kg (range: 64–102 kg), volunteered and gave written informed consent to participate in this study, which was performed according to the declaration of Helsinki and approved by the Ethics and Research Committee of the Santa Catarina State University. All participants were apparently healthy nonsmokers who were taking no medication or nutritional supplementation. They were injury-free and practiced physical activity at least twice a week. Before each test, individuals were asked to abstain from intense exercise and products that contained caffeine for at least 48 h and to keep the same dietary intake profile for at least 72 h.

All cycling tests were conducted on an electronically braked cycle-ergometer (Ergo 167 Cycle, Ergo-Fit, Pirmasens, Germany) with pedal frequency maintained at 70 rpm. The interval between each test was at least 48 h. The participants were instructed to arrive at the laboratory in a rested and fully hydrated state within 2–3 h postprandial, and to avoid strenuous exercise in the 48 h preceding a test session. Each participant was tested at the same time of day (±1 h) to minimize the effects of circadian variation. All cycle tests were performed in a temperature-controlled laboratory (21 ± 1 °C).
The incremental test started with a power of 1 Watt per kg of body mass and was increased by 0.5 Watt per kg of body mass every third minute until exhaustion. Participants were verbally encouraged to continue as long as possible. The test ended at the point of voluntary exhaustion or when participants were unable to maintain the predefined pedaling rate. During the test, participants breathed through a facemask, and pulmonary oxygen uptake was measured continuously (Quark PFT ergo, Cosmed, Rome, Italy). Data were averaged for each 15 s period. Maximal oxygen uptake and peak power were defined as the highest 15 s oxygen uptake value and the power output attained at exhaustion, respectively.
For MLSS determination, the power output set for the first test corresponded to 70% of the peak power measured during incremental test to minimize the number of tests per subject. Each constant workload test lasted 30 min and capillary blood samples (25 µL) were collected by micropuncture at the earlobe and then stored into microcentrifuge tubes containing 50 µL NaF (1%) at minutes 10 and 30 for the electrochemical determination of BLC, using the enzyme electrode technology (YSI 2300 STAT, Yellow Springs, OH, USA). If during the first test a steady state or decrease in BLC was observed, further subsequent 30 min constant work rate tests with a 10 Watts higher work rate were performed on separate days until no steady state could be maintained. Alternatively, if a clearly identifiable increase in BLC occurred or if the test could not be completed due to exhaustion, further constant work rate tests were conducted with reduced work rate (10 Watts). The MLSS workload was defined as the highest power output at which BLC did not increase by more than 1 mmol·L−1 between minutes 10 and 30 of the constant load test [18].
On the following two occasions, participants were then asked to perform a test until exhaustion at MLSS after the administration of either caffeine (6 mg per kg of body mass) or dextrose (placebo). The opaque capsules were administered with 250 mL of water in a randomized, double-blinded manner. To prevent foreknowledge of treatment assignment, the sequence order (caffeine-placebo or placebo-caffeine) was implemented using a sequentially numbered container (an allocation schedule by allocation concealment to prevent selection bias and to protect the assignment sequence until allocation). Allocation and assignment for each participant was performed by an independent, blinded staff member of our laboratory. Following supplementation, participants rested for 50 min after ingestion, and then completed a 5 min warm-up at 50% of peak power. After that, they were instructed to rest passively sitting on the bike. One hour after consuming the capsule, participants started the test. They were verbally encouraged to exercise as long as possible, and exhaustion was reached when the subject was unable to maintain the required pedaling rate (70 rpm). During these tests, capillary blood samples were collected at pretest, in the tenth and the thirtieth minutes of exercise, and at exhaustion to determine blood glucose and lactate concentrations. The oxygen uptake (V̇O2), carbon dioxide output (V̇CO2), respiratory exchange ratio (RER), minute ventilation (V̇E), and heart rate (HR) data were measured breath by breath, subsequently reduced to averages of 30 s and compared in the tenth and thirtieth minutes of exercise, and at exhaustion. Subjects were able to ingest water (ad libitum) throughout the time to exhaustion protocols, whereby the facemask was temporarily removed. Time to exhaustion protocols are among the most reliable of measures of endurance performance. The apparently poor reliability of time to exhaustion (coefficients of variation ≥ 10%) is an artifact of the relationship between exercise duration and power output. When duration-power relationship was used to convert changes in time to exhaustion into equivalent changes in power output in a constant-duration time trial, it was found that time to exhaustion is among the most reliable of measures of endurance performance [19].

Comparisons were performed with the mixed linear modeling procedure of the IBM SPSS statistics (Version 19.0, IBM Corporation, New York, NY, USA), using the subject term as a random effect. Treatment was a fixed effect, and order of treatment was included as an additional fixed effect to account for continuing familiarization or other order effects. For cardiorespiratory and metabolic responses, moment was also included as a fixed factor. The changes in BLC from tenth to thirtieth minute of exercise were analyzed using the BLC at MLSS determination as a covariate. The uncertainties were expressed as 95% confidence limits and all tests were analyzed at an alpha level of 0.05. 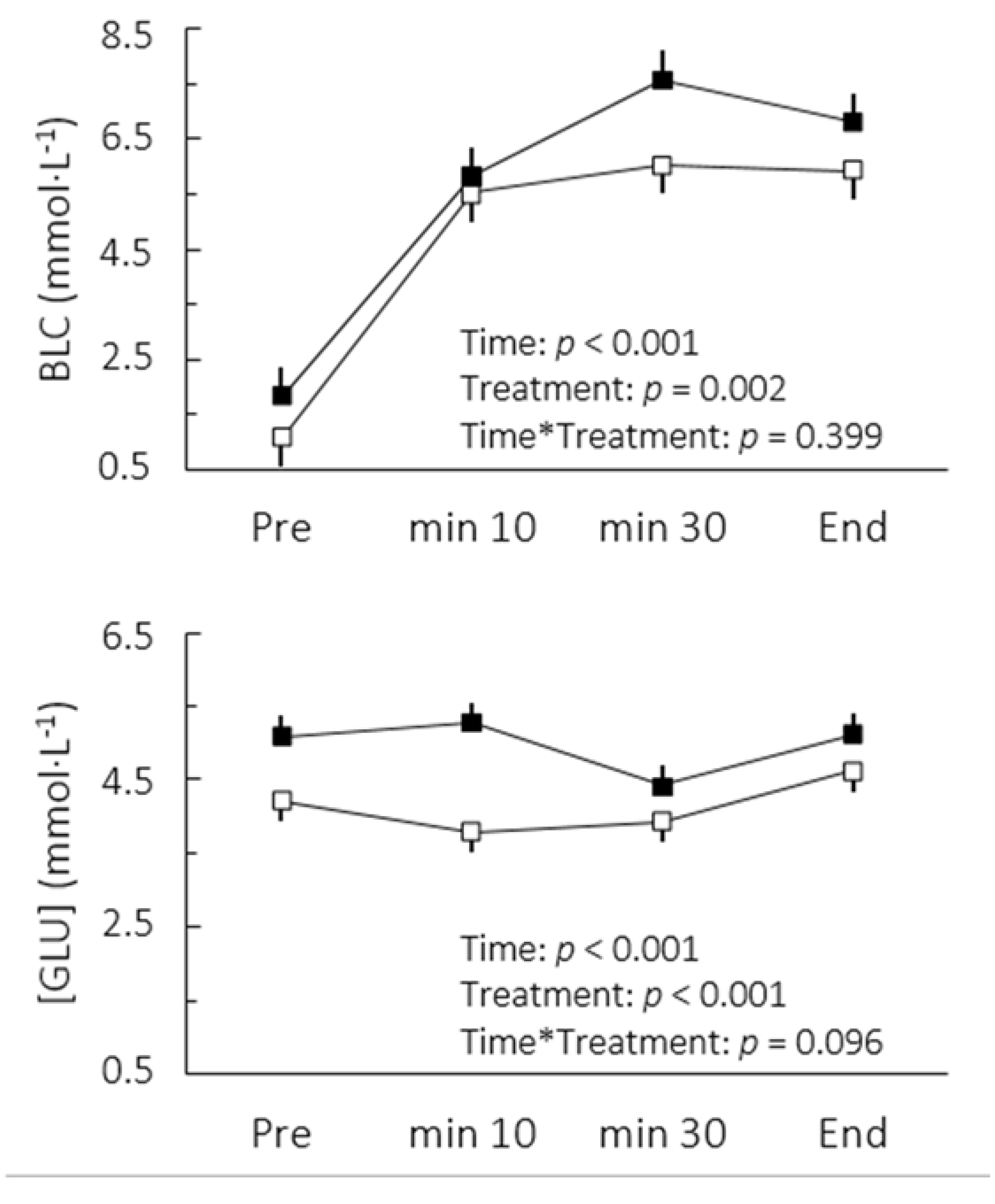 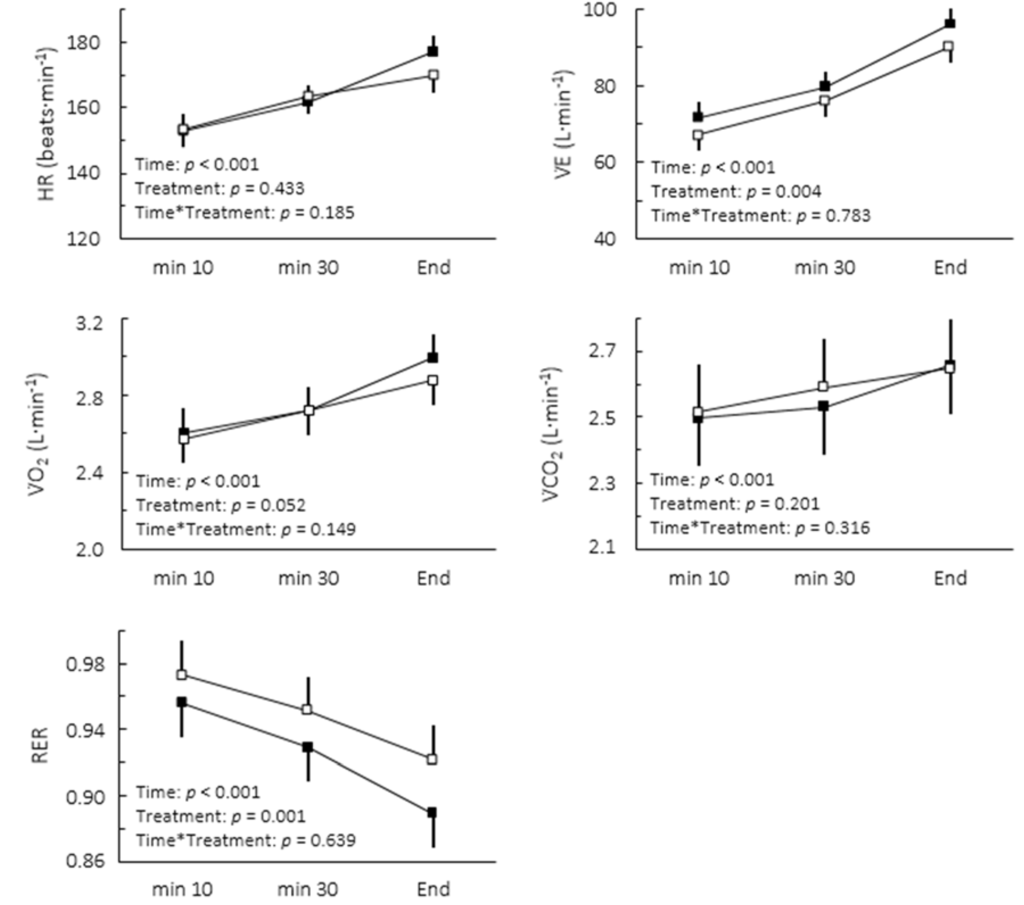 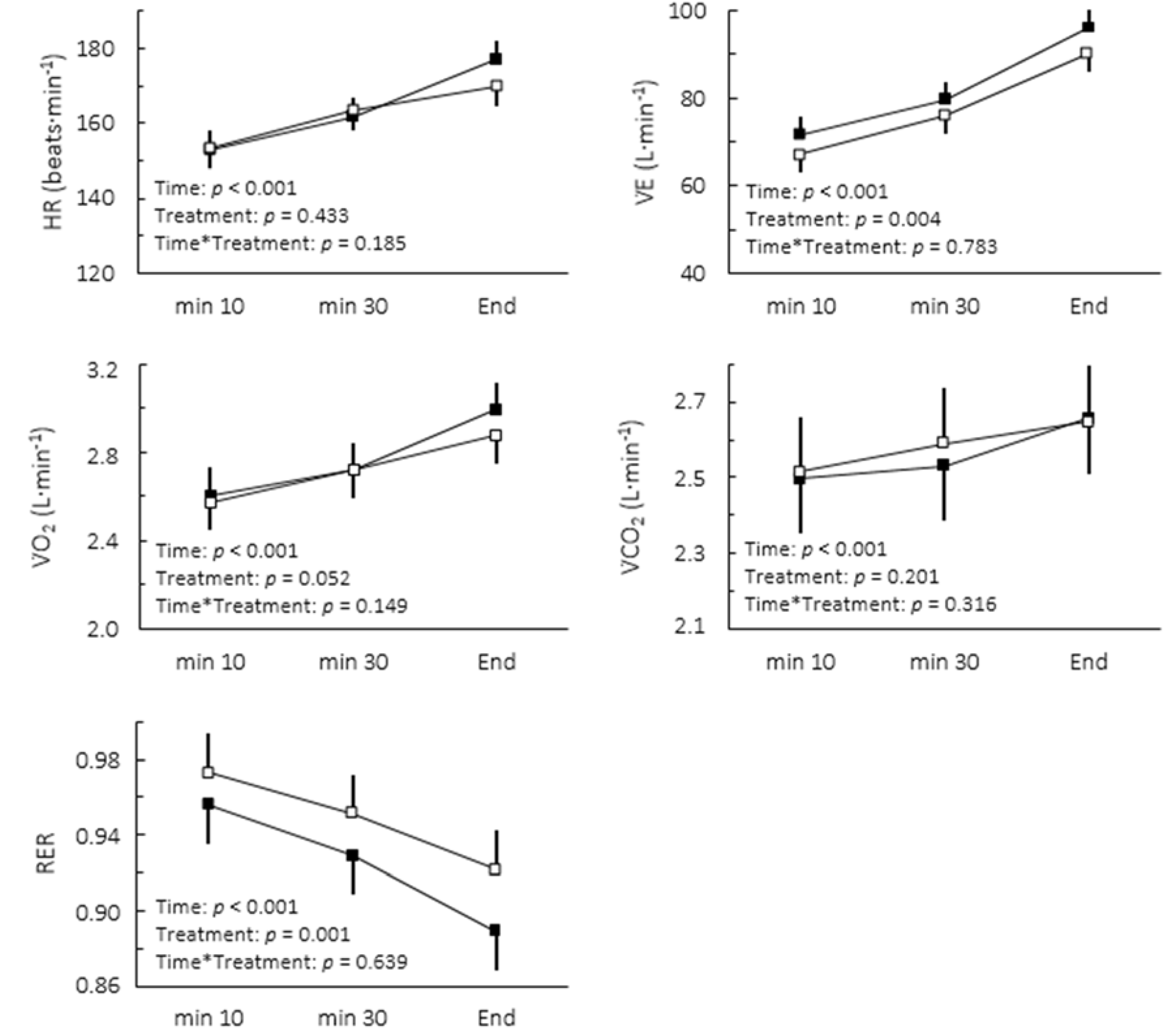 In summary, caffeine exerted a positive effect on time to exhaustion at MLSS workload that was accompanied by shifts in substrate utilization during exercise. This strengthens the findings that sparing of the endogenous carbohydrate stores may be one of the several physiological effects of caffeine during submaximal exercise and perhaps one of the factors determining exercise tolerance at MLSS. We recommend future studies investigating how/whether caffeine ingestion affects MLSS workload.

Thanks to all colleagues who contributed and to the National Council of Scientific and Technological Development (CNPq) for their financial support. The authors declare that they have no conflict of interest.