Energy Intake, Profile, and Dietary Sources in the Spanish Population: Findings of the ANIBES Study
Next Article in Special Issue

Metabolic syndrome (MetS) is a collection of medical conditions that can lead to obesity, diabetes, cardiovascular disease and hypertension. The prevalence of MetS is on a rapid rise due to the shifted paradigm of diet and lifestyle and thus has afflicted many people worldwide. It is well known that calorie restriction (CR) improves some markers of MetS [1,2,3], such as blood pressure, blood glucose and plasma cholesterol, as demonstrated in a number of animal models, and humans [3,4].
Besides functioning as primary energy storage reservoirs, adipose tissue also acts as an endocrine organ secreting numerous protein hormones into the circulation [5]. It was reported that a reduction in White Adipose Tissue (WAT) via CR is likely to change the levels of its secreted hormones. Among all the WAT depots, Visceral Adipose Tissue (VAT) is closely related in particular to MetS and thus is a pathogenic fat depot [6]. The VAT compartment secretes adipokines and cytokines that are predisposed to the development of metabolic traits [7]. Adiponectin is an adipokine and mainly expressed in adipose tissues. Adiponectin has been shown as an insulin-sensitive hormone that participates in the regulation of glucose and lipid metabolism. It was found that adiponectin levels rise during CR [8].
Several elements are capable of modulating adiponectin gene expression, most notably peroxisome proliferator activator receptor γ (PPAR-γ) [9], which is expressed in adipose tissues. A response element of PPARγ was discovered on the promoter of adiponectin gene [10]. Treatment with PPARγ agonists induced adiponectin synthesis during adiponeogenesis [11,12,13]. PPARγ can also be upregulated by CR through its antioxidative action [14,15].
The beneficial effect of CR on prevention and treatment of MetS has been widely recognized. The optimal CR diet, however, remains to be identified. Among all the CR diets, CR via manipulating dietary carbohydrate content has attracted increasing interest due to its effectiveness on weight loss, glycemic control, insulin sensitivity and the management of cardiovascular risk factors [16]. However, there is little consensus about the extent of dietary carbohydrate restriction to elicit the optimal result in controlling metabolic parameters. In the present study, 12-week CR by varying dietary carbohydrate content (80% or 60% energy (34% or 68% carbohydrate reduction) of the control diet) was employed in Wistar rats to investigate the changes in metabolic parameters and expressions of adiponectin and PPARγ. The results of the study will provide a new perspective and new scientific evidence for the prevention and treatment of MetS.

Thirty-six male Wistar rats (two months old, body weight 240–260 g) were obtained from a local supplier for laboratory animals (Laboratory Animal Center of Hubei Province; Wuhan, China). Rats were housed individually under laboratory conditions (12 h day and night lighting cycle, 22 °C ± 2 °C, 50% ± 10% humidity). All experimental protocols were reviewed and approved by Tongji Medical College Council of Animal Care Committee. Rats were randomly assigned into three different groups, ad libitum group (AL group; n = 12), calorie restriction group 1 (CR1 group; n = 12) and calorie restriction group 2 (CR2 group; n = 12). All rats had ad libitum access to drinking water.
Rat chow diets were prepared based on the Association of Official Analytical Chemists (AOAC) and AIN-93G formulas to meet the nutrient and energy requirements for the growth and development of rats [17]. Rats were fed with these diets for 12 weeks. AL group had ad libitum access to the feed whereas CR1 and CR2 group were maintained on a CR regimen with daily access to 80% and 60% of the calorie intake of AL group, respectively (Table 1). Starch was the only nutrient reduced from diets to achieve calorie restriction for CR1 and CR2 groups whereas the amount of other nutrients provided were at the same level as those in the AL group to ensure sufficient nutrients were provided to maintain normal growth of rats. As starch constitutes 58.5% (w/w) of the control diet, 80% and 60% CR correspond to 34% and 68% carbohydrate reduction in CR1 and CR2 group, respectively. The amount of feed consumed by each rat was recorded daily and body weights of rats were monitored weekly. At the end of the 12-week study, rats fasted for 10 h overnight and blood samples were collected. Rats were then sacrificed by decapitation. Serum samples were obtained from all blood samples promptly after blood collection and stored at −80 °C. The peri-epididymal and perirenal adipose tissues were obtained, weighed and frozen immediately in liquid nitrogen prior to storage at −80 °C.

Average calorie intakes of all three groups demonstrated a similar decreasing trend over the 12-week feeding period due to decreased growth rates of rats with maturation (Figure 1). In good agreement with the study design, the ratio of total calorie intake of AL, CR1 and CR2 groups during the feeding period was calculated as 100:81:61. 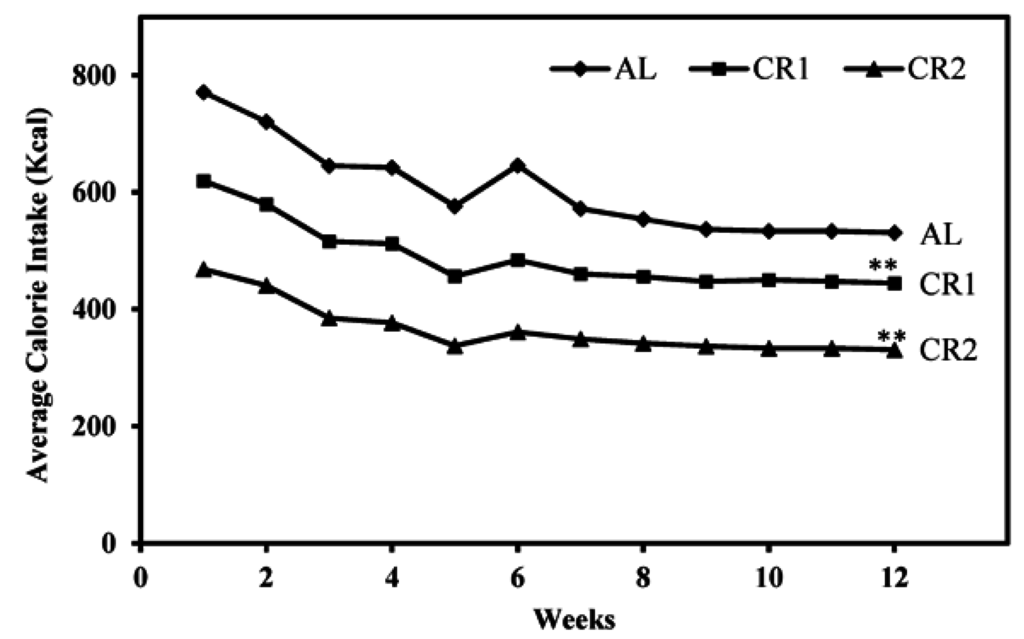 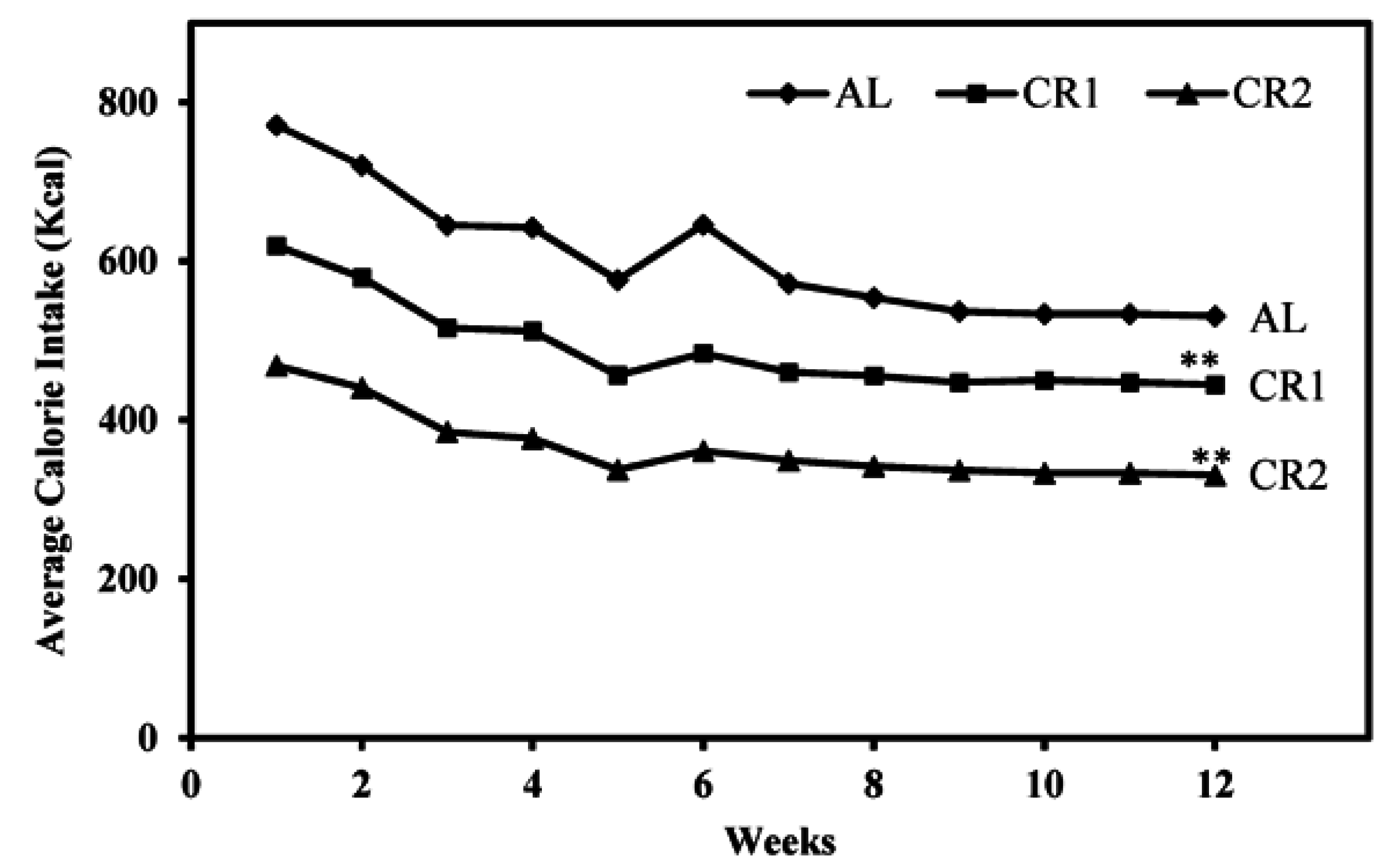 Table 2. Fasting blood lipid, metabolic and insulin responses in rats of different levels of calorie restriction †,*.
† Abbreviations: AL: ad libitum; CR: calorie restriction; HDL-C: high density lipoprotein cholesterol; LDL-C: low density lipoprotein cholesterol; * Blood samples were collected at the end of the study; Data was presented as arithmetic mean ± 1 SD (n = 12 for each group); # HOMA-IR (Homeostasis Model Assessment of Insulin Resistance) = Fasting Blood Glucose (mmol/L) × Fasting Insulin (mIU/L)/22.5 [19]; a p < 0.05 versus AL group; b p < 0.05 versus CR1 group.
No significant difference was detected in blood glucose among all groups (Table 2). Insulin levels decreased by CR which was significant in CR2 compared to AL (p < 0.05). Insulin resistance, as presented as HOMA-IR, significantly decreased with increased levels of CR (p < 0.05).
All groups demonstrated a similar level of serum adiponectin at the beginning of the study (Figure 3). At the end of the study, serum adiponectin was only significantly increased in CR2 group but not in AL and CR1 groups.

CR also led to a decrease in mass of visceral adipose tissue (Table 3). At the end of the 12-week study, wet weights of VAT and its percentage to the total body weight in CR groups were significantly lower than those in AL group (p < 0.05). As compared to CR1 group, further calorie restriction in CR2 group resulted in a significantly lower visceral fat mass (p < 0.05).

Results obtained from RT-PCR indicated that the expression levels of adiponectin mRNA and PPARγ mRNA in CR groups were significantly higher than those in AL group (Figure 4). Within two CR groups, adiponectin and PPARγ mRNA levels in CR2 group were significantly higher than those in CR1 group (Figure 4(A2,B2)). 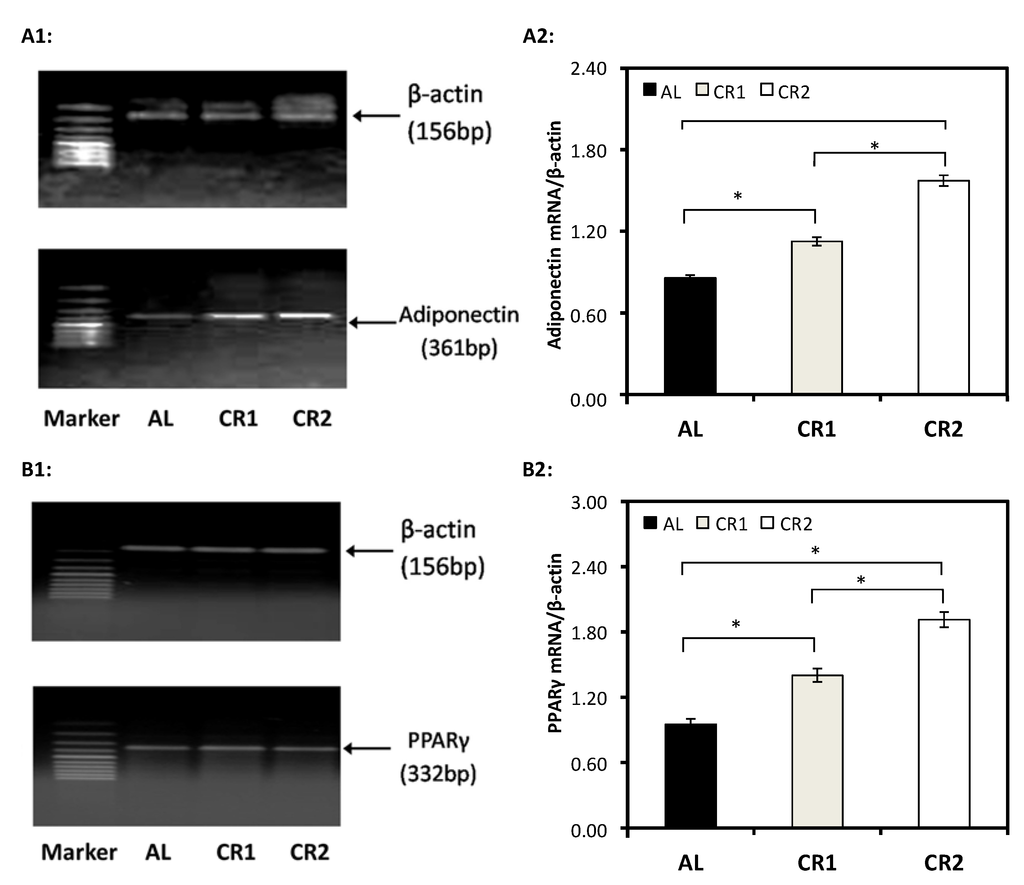 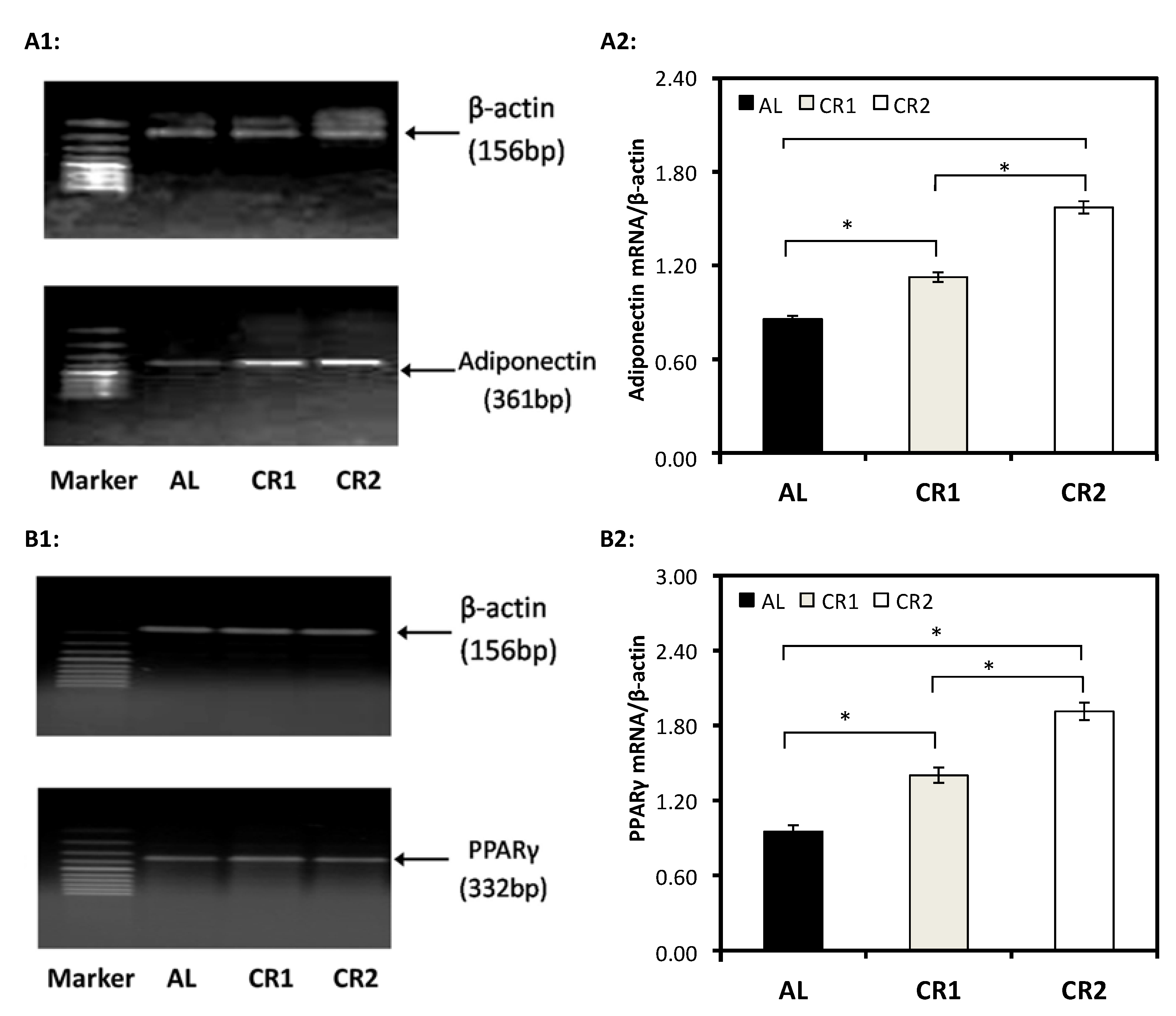