Obesity is associated with serious health effects, such as type 2 diabetes and heart disease. Obesity affects the health of various tissues in the periphery (i.e., white and brown adipose tissue) and the brain [1,2,3]. Brown adipose tissue (BAT) is the primary site for non-shivering thermogenesis and energy expenditure. In contrast to white adipose tissue (WAT) which stores energy, BAT dissipates energy from food as heat, leading to a reduction in fat storage and weight gain [4]. BAT is present in human adults [5,6], and hence has been extensively investigated as a therapeutic target to prevent and treat obesity.
BAT is higly innervated by sympathetic nerves and the brainstem is an autonomic center for sympathetic outflow to this tissue [7]. The noradrenergic nucleus in the brainstem contains sympathetic nerves which releases norepinephrine and innervates tissues, including BAT. The rate-limiting enzyme tyrosine hydroxylase (TH) is a marker of noradrenergic nerve fibers [8]. TH immunoreactivity in BAT is lower in obesity-prone C57BL/6J mice than in obesity-resistant Sv129 mice [9]. A reduced level of TH mRNA has also been found in the brainstem of olanzapine-induced overweight rats [10].
Adrenergic activation contributes to energy regulation in BAT and the brain. Beta 3-adrenergic receptor (β3-AR), peroxisome proliferator-activated receptor gamma coactivator 1-alpha (PGC-1α) and uncoupling proteins (UCPs) have been found in BAT and in many brain regions, and are involved in energy regulation [11,12,13,14,15]. Reduced levels of these proteins have been found in the WAT and BAT of obese mouse models [16,17,18]. However, the expression of these proteins in BAT and brainstems of HFD-fed mice during dietary intervention has not been examined.
Obesity is associated with morphological changes in BAT, and in particular functional BAT is reduced in obese and diabetic patients [19]. Moreover, excess fat deposition in BAT has been observed in obese rodent models [20,21,22,23]. Conversion of BAT into WAT-like tissue has been demonstrated in obese prone mice [17]. Other studies have shown that BAT of mice fed high-energy diets (HFD and cafeteria diet) is highly infiltrated with macrophages [3], and macrophages are recruited as part of the inflammatory phenotype in BAT of diabetic prone mice [24].
Pentacyclin triterpenes are chemical compounds extracted from herbal medicines, which can be found in plant roots, seeds, leaves and fruits (e.g., ginseng, tea and apples). These compounds act on multiple tissues, including BAT and brain [25,26]. Among these triterpenes, oleanolic acid and its derivatives demonstrate myriad benefits in the defence against inflammation, type 2 diabetes and associated disorders [27,28]. Synthetic oleanane triterpenoids have potent therapeutic properties for the prevention and treatment of chronic diseases [29,30]. Bardoxolone methyl (BARD), a C-28 methyl ester of 2-cyano-3, 12-dioxoolean-1,9-dien-28-oic acid (CDDO), is one of these synthetic oleanolic acids. Human and animal studies have illustrated anti-obesity, anti-diabetic, and anti-inflammatory actions of BARD [31,32,33,34]. BARD is absorbed through small intestine mucosa and distributes to distal tissues such as cerebral cortex and lung [35]. It targets immune cells in multiple organs including brain, kidney, and WAT [27,31,36,37]. BARD increases energy expenditure in HFD mice by elevating oxygen consumption [31]. Additionally, we have found that BARD increases uncoupling and other energy expenditure proteins in WAT of HFD-fed mice [16]. However, the effects of BARD on BAT morphology and the sympathetic nervous system have not been studied yet, and its role in energy regulation is not clear.
In this study, we investigated the effect of BARD on BAT morphology and molecular changes in HFD-fed mice. We also assessed the effects of BARD in the ventrolateral medulla (VLM) and dorsal vagal complex (DVC) of the brainstem. Current study has shown that BARD is well tolerated and effective in obese and diabetic rodents [38]. Present study may not only help to understand BARD pharmacology in the BAT and brainstem axis, but also to investigate the potential of this compound in the prevention of obesity associated complications.

Twenty one C57BL/6J male mice were obtained from the Animal Resource Centre (Perth, Australia), and acclimatized within our institutional animal facility (temperature 22 °C, 12 h light/dark cycle) for one week before experimentation. All procedures were approved by the Animal Ethics Committee, University of Wollongong, NSW, Australia, and complied with the Australian Code of Practice for the Care and Use of Animals for Scientific Purposes.
Animals were divided into three groups (n = 7), and fed either a high-fat diet (HFD), a high-fat diet supplemented with bardoxolone methyl (HFD/BARD), or a low-fat diet (LFD). The HFD and HFD/BARD groups were fed a HFD containing 40% energy from fat (SF11-095, Specialty Feeds, WA, USA), and the low-fat diet (LFD) animals were maintained on normal diet (Vella Stock Feeds, Doonside, NSW, Australia). The dose of BARD was selected as 10 mg/kg body weight, according to dosages from previous studies [31,33], and was administered in drinking water for 21 weeks. Body weight was measured before and after the experiment, which shows significant reduction of body weight in HFD mice administered BARD [16]. HFD and LFD control animals received saline in drinking water. Samples of interscapular BAT were fixed in 4% paraformaldehyde and embedded in paraffin for histology and immunohistochemistry. Other samples of interscapular BAT and brain were snap-frozen in liquid N2 and stored at −80 °C for Western blot.
Frozen brain sections were cut at 400 µm based on a standard mouse brain atlas according to our previous study [39,40]. Brainstem VLM and DVC were collected from sections using a Stoelting Brain Punch (#57401, 0.5 mm diameter, Wood Dale, Stoelting Co., IL, USA). The brainstem samples were stored at −80 °C for further analysis.

We used the SPSS 19 package (SPSS, Chicago, IL, USA) for data analysis. All data are presented as mean ± standard error of the mean (SEM). One way analysis of variance (ANOVA) and the least significant difference (LSD) post-hoc analysis were used to compare the morphology of adipocytes (lipid area and lipid droplet area), density of macrophages, and the expression of sympathetic proteins among mouse groups (LFD group, HFD group, and HFD/BARD group). Differences between groups were considered statistically significant at p < 0.05.

3.1. BARD Prevents Fat Deposition in the BAT of Mice Fed a HFD 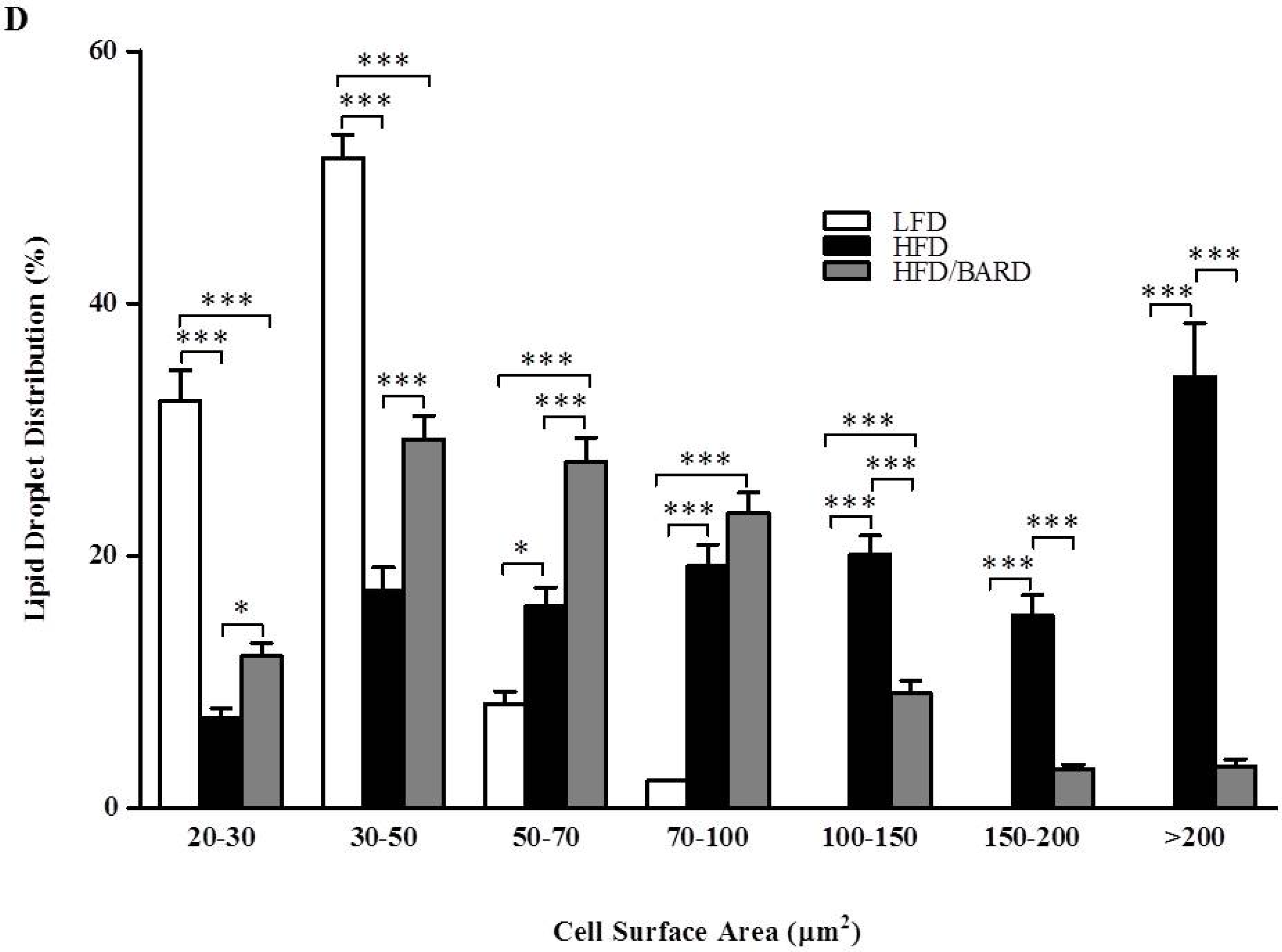 3.2. BARD Prevents Macrophage Infiltration and Recruitment of CD11c and CD206 in BAT of Mice Fed a HFD

To investigate the effects of BARD on sympathetic innervation in BAT, we examined the expression of TH protein and its phosphorylation. The expression of energy expenditure proteins (UCP1, β3-AR and PGC-1α) was also determined by Western blot (Figure 4A). As shown in Figure 4C, HFD mice had significant reduction in the phosphorylated (pTH)/TH ratio compared with LFD mice (−32%, p < 0.01). BARD administration in HFD mice increased the pTH/TH ratio by 55% (p < 0.01) compared with mice fed HFD alone. There was no significant difference in the expression of total TH, β3-AR and PGC-1α and UCP1 protein among the three groups of mice (Figure 4B,D–F, respectively). The increased TH signalling activity suggests that BARD activates BAT via noradrenergic innervation. 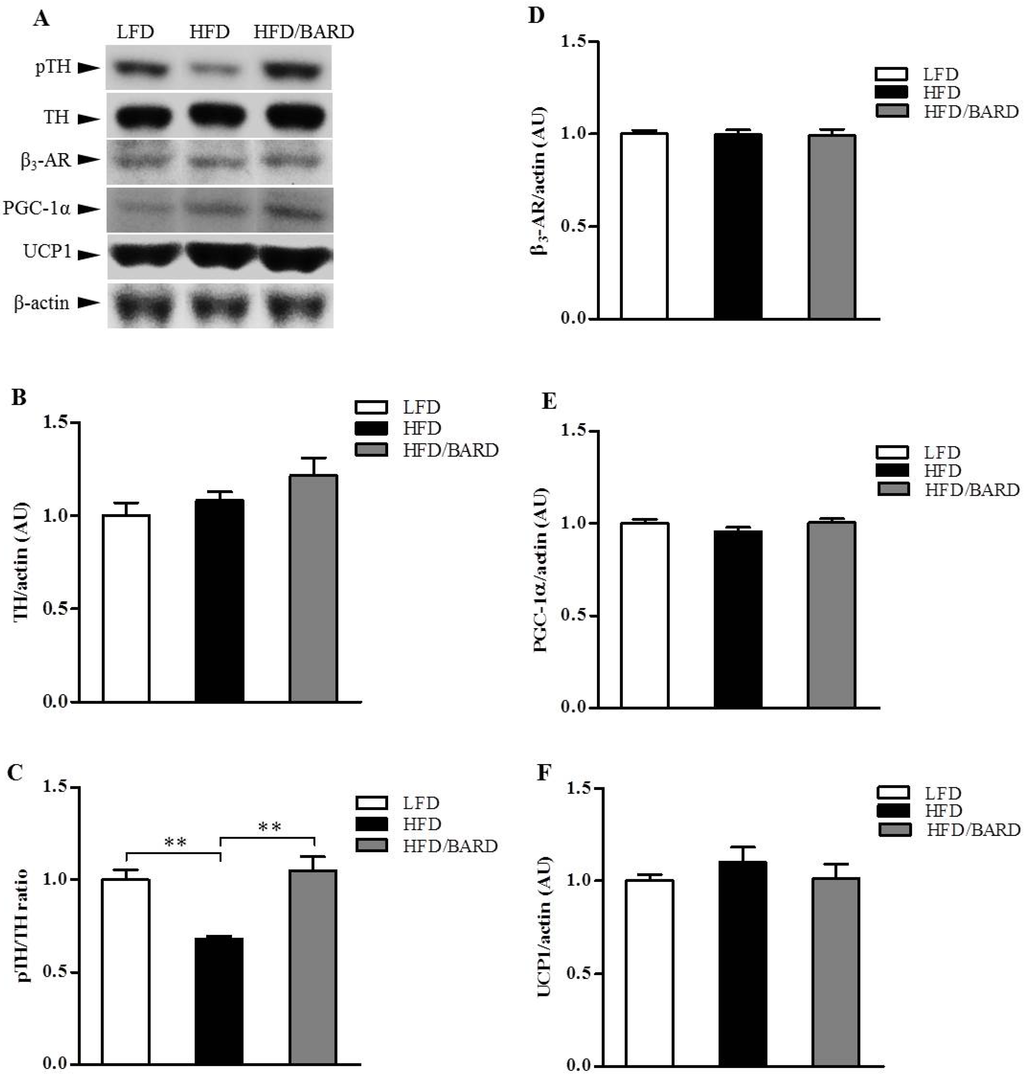 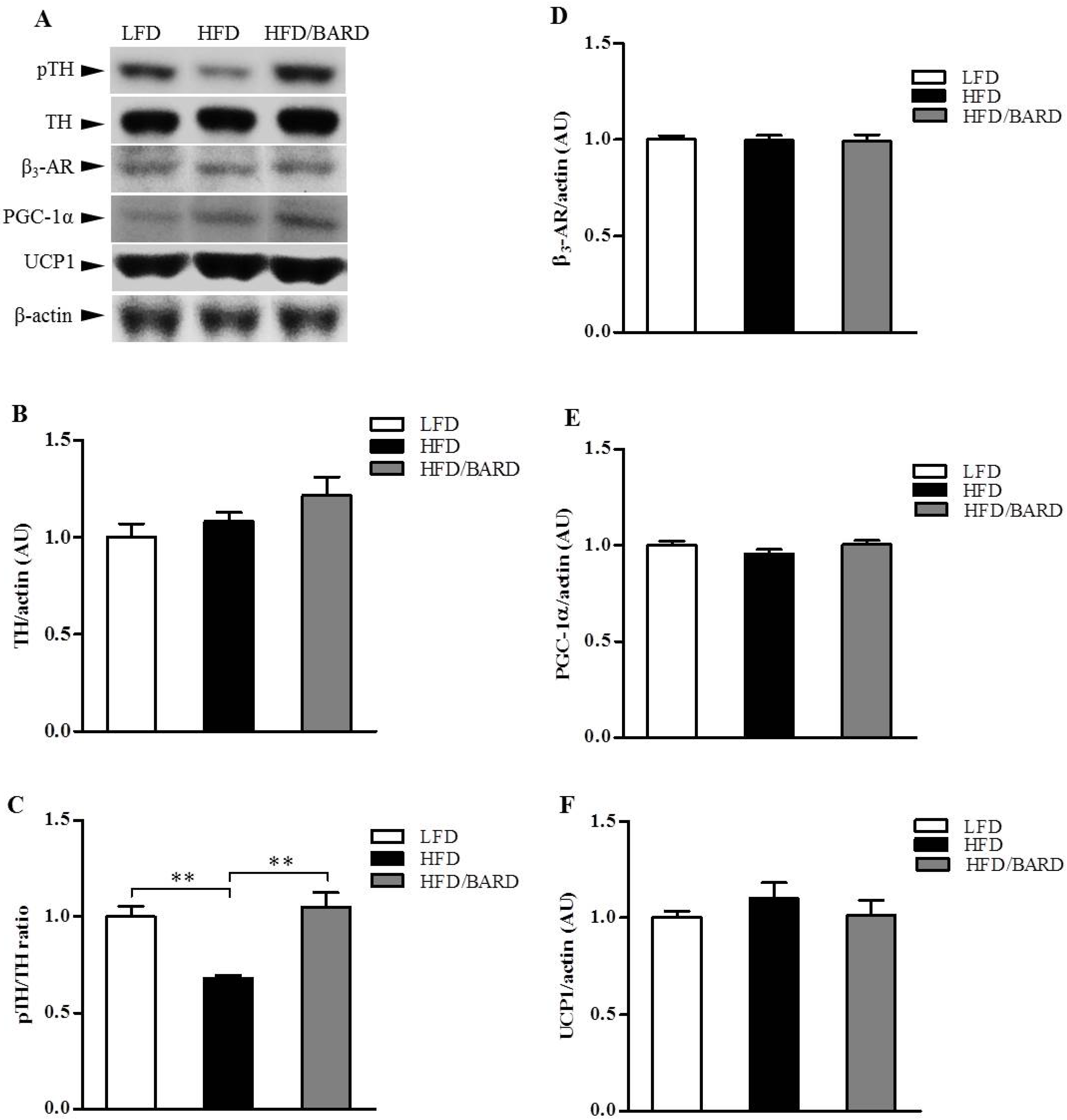 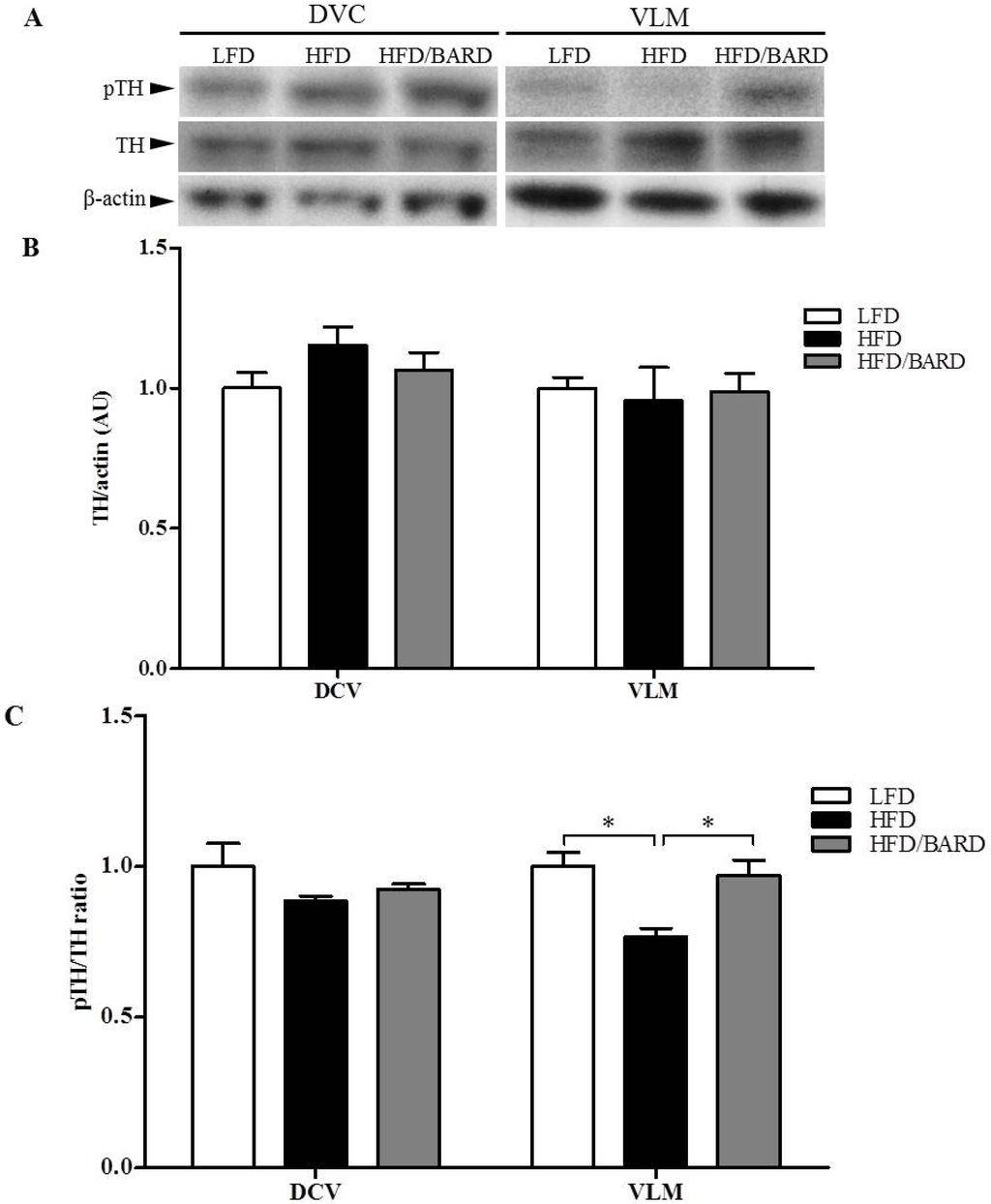 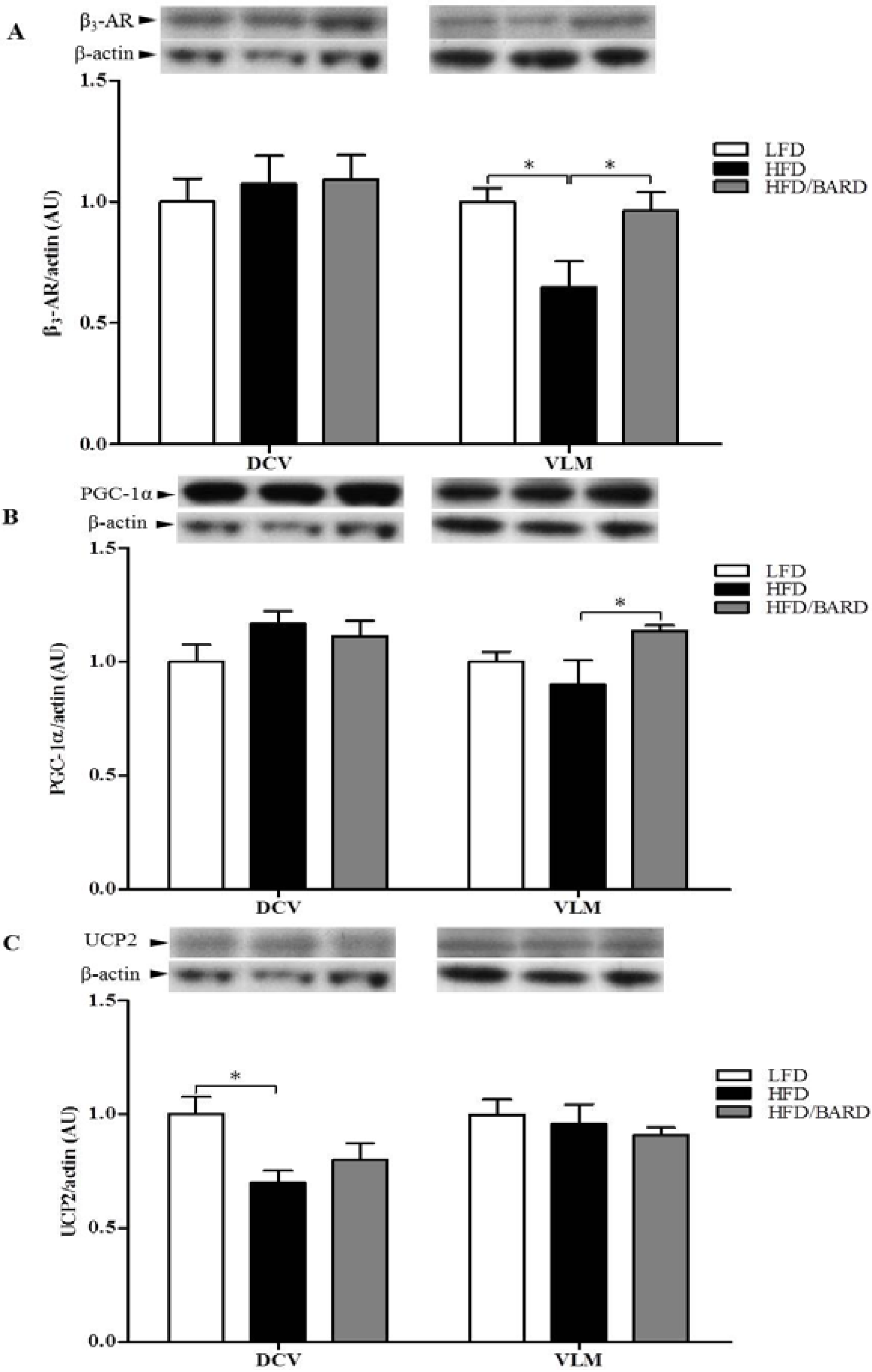 The authors would like to thank Diabetes Australia Research Trust for the support granted to Xu-Feng Huang.