Role of Dietary Protein and Thiamine Intakes on Cognitive Function in Healthy Older People: A Systematic Review
Next Article in Special Issue

:
Background and Aims: Studies in South Asian population show that low maternal vitamin B12 associates with insulin resistance and small for gestational age in the offspring. Low vitamin B12 status is attributed to vegetarianism in these populations. It is not known whether low B12 status is associated with metabolic risk of the offspring in whites, where the childhood metabolic disorders are increasing rapidly. Here, we studied whether maternal B12 levels associate with metabolic risk of the offspring at birth. Methods: This is a cross-sectional study of 91 mother-infant pairs (n = 182), of white Caucasian origin living in the UK. Blood samples were collected from white pregnant women at delivery and their newborns (cord blood). Serum vitamin B12, folate, homocysteine as well as the relevant metabolic risk factors were measured. Results: The prevalence of low serum vitamin B12 (<191 ng/L) and folate (<4.6 μg/L) were 40% and 11%, respectively. Maternal B12 was inversely associated with offspring’s Homeostasis Model Assessment 2-Insulin Resistance (HOMA-IR), triglycerides, homocysteine and positively with HDL-cholesterol after adjusting for age and BMI. In regression analysis, after adjusting for likely confounders, maternal B12 is independently associated with neonatal HDL-cholesterol and homocysteine but not triglycerides or HOMA-IR. Conclusions: Our study shows that low B12 status is common in white women and is independently associated with adverse cord blood cholesterol.
Keywords:
vitamin B12; maternal; offspring; metabolic risk; lipids

The prevalence of childhood obesity is increasing rapidly [1,2]. Recently, the Early Childhood Longitudinal Study demonstrated that 27.3% of children were either overweight or obese by the time they enter kindergarten in the United States [1]. Higher rate of childhood obesity is a likely contributor for the increasing incidence of type 2 diabetes (T2D) earlier in life as well as pre-gestational and gestational diabetes (GDM) in women [3]. It is known that childhood obesity independently predicts obesity and metabolic disorders in the adulthood [4]. Children born with lower HDL and higher triglyceride levels were small for gestational age (SGA) and had higher abdominal circumference [5]. It is known that both higher abdominal circumference and SGA are associated with future development of T2D and GDM [6,7] in many populations.
Although current adverse lifestyle (nutrition and physical inactivity) contributes to obesity, a growing body of evidence links nutrient imbalance in early life to the development of metabolic disorders in childhood and in adults [8]. Many studies support this link including the Dutch-famine study. Individuals exposed to nutritional imbalance during pregnancy are likely to be obese, have early onset of coronary artery disease, T2D and worse cognitive performances as adults [9]. Emerging evidence from clinical studies show that key maternal micronutrients involved in the one-carbon metabolism (1-C) can cause adverse metabolic programming. Independent studies from South Asia have demonstrated that children born to mothers with low vitamin B12 [10,11] and higher folate [12] have greater insulin resistance. In addition, low maternal B12 levels independently contributed to the risk of small for gestational age (SGA), which has been shown to increase the metabolic risk of the offspring [13]. Vegetarianism is the likely cause of high prevalence of low B12 levels in these population [14]. In a Brazilian pregnancy cohort, low maternal B12 was associated with lower levels of the methyl donor (S-adenosyl methionine—SAM) in the cord blood [15]. A study in a Chinese population demonstrated that low maternal B12 is common during pregnancy and is associated with an altered methylation pattern of the insulin growth factor 2 (IGF2) promoter region in the cord blood [16], highlighting a potential role of B12 on fetal growth. Further, animal studies showed that maternal vitamin B12 deficiency resulted in higher adiposity, insulin resistance, blood pressure [17] and adverse lipid profile in the offspring [18,19]. These investigations provide evidence that low maternal B12 could be an independent determinant of adverse metabolic phenotypes in the offspring.
Recently, we demonstrated in Europeans and Indians with T2D that vitamin B12 deficiency is associated with adverse lipid profile [20]. Re-analysis of the UK National Diet and Nutrition Survey data showed that low vitamin B12 levels (<191 ng/L) is common in the adult population (10%) and in women of reproductive age (14%) [21]. Our preliminary study of white pregnant women showed that the rate of low B12 status was as high as 20% at 16–18 weeks of gestation [22].
Despite the evidence that vitamin B12 deficiency is a potential contributor for adverse offspring metabolic phenotypes and the prevalence of low B12 status is increasing in White Caucasian population, the link between maternal B12 status and metabolic risk at birth is unexplored in the White Caucasian population. Therefore, the objective of our study was to investigate whether maternal B12 levels in white women independently associate with the metabolic risk at birth.

The study was conducted in University Hospital Coventry Warwickshire (UHCW), Coventry, UK. All study participants were pregnant women delivering at 39–40 weeks of gestation. The Coventry local research ethics committee approved the study, and all patients gave written informed consent (Research Ethics Committees 07/H1210/141). Women with known chronic diseases were excluded. Maternal data including parity, smoking, BMI and birth weight were collected from pregnancy records. Folic acid supplement use collected but detailed dietary history was not recorded. Maternal BMI measured routinely at the first pregnancy visit (before 10 weeks of gestation). We collected 182 maternal venous and cord blood samples (91 mother-newborn pairs) at the time of delivery. Extrapolating from our preliminary studies [21,22], we anticipated around 20%–25% of the mothers to have low levels of vitamin B12 (<191 ng/L). To detect a similar proportion of low B12 status a sample size of 100–120 was required. The samples were collected in the fasting state, in tubes without anticoagulant and centrifuged at 2000 rpm/10 min. Serum was separated, aliquoted and stored at −80 °C until analysis.

Serum glucose, cholesterol, triglycerides, HDL cholesterol were determined using an auto analyser Synchron CX7 (Beckman Coulter, Fullerton, CA, USA) based on enzymatic colorimetric assays. Insulin was measured using Invitrogen ELISA kit (Camarillo, CA, USA) according to manufacturer’s instructions. LDL cholesterol was calculated using Friedewald formula. Insulin resistance (HOMA-IR) was calculated by the Homeostasis Model Assessment 2 computer model (HOMA2) using fasting insulin and glucose levels [10]. Serum B12 and folate were determined by electrochemiluminescent immunoassay using a Roche Cobas immunoassay analyzer (Roche Diagnostics UK, Burgess Hill, UK). Similar to other studies [20,23,24], we have used 191–663 ng/L for serum Vitamin B12 and 4.6–18.7 μg/L for serum folate as normal range, respectively. The inter-assay coefficient of variations for B12 and folate were 3.9% and 3.7%, respectively. To avoid potential bias, all the biochemical analyses were conducted in a single batch to minimise assay variation. All the laboratory personnel were blinded and did not have any access to the clinical data. Serum homocysteine was determined by stable isotopic dilution analysis liquid chromatography (LC-MS/MS) [25] using a Waters Equity UPLC system (Waters, Milford, CT, USA) coupled to an API 4000 tandem mass spectrometer (Applied Biosystems, Warrington, UK). Due to the uncertainty of defining deficiencies of serum vitamin B12 and folate levels during pregnancy and cord blood, the terms “low B12 status” and “low folate status” were used throughout the manuscript if the levels were below 191 ng/L and 4.6 μg/L, respectively.

Continuous data are reported either as mean ± standard deviation (SD) or geometric mean with 95% confidence intervals (CI). Categorical data are reported in numbers (percentages). The distributions of the maternal and neonatal parameters such as vitamin B12, folate, cholesterol, triglycerides, HDL, LDL, glucose, insulin, HOMA-IR and homocysteine concentrations were skewed; these data were log-transformed before analyses. Student’s t-test was used for comparison of groups. Bivariate correlations were done using Pearson test. Variables that showed significant associations with dependent variable (neonatal metabolic risk factors) were included as independent variables in the multiple linear regression analyses. To facilitate comparison, dependent and independent variables were converted into standard deviation scores (SDS). The data are presented as SD change in offspring outcome per SD change in maternal vitamin B12, folate and homocysteine. Associations between maternal vitamin B12, folate and homocysteine concentrations and offspring outcomes were examined in multivariate linear regression using 3 models. Model 1: unadjusted; Model 2: adjusted for maternal age, BMI, glucose, insulin, parity, folic acid supplement use, smoking, vitamin B12, folate and homocysteine; Model 3: Model 2 + respective maternal variable. All tests were two-sided, and p values of <0.05 were considered to be statistically significant. All analyses were performed using SPSS Statistics version 21 (IBM Corp, Armonk, NY, USA).

3.1. B12, Folate and Homocysteine Status

The clinical characteristics of mothers and neonates are shown in Table 1. The prevalence of serum low vitamin B12 and folate status in women during pregnancy were 40% and 11% in mothers and 29% and 0% in neonates, respectively (Table 1). In cord blood, all the biochemical parameters were significantly lower than in maternal serum, except for the B12 and folate levels (Table 1). Children born to mothers with low B12 status had significantly lower B12 levels compared to those born to mothers with normal levels (Table 2). Mothers with higher parity and smoking had lower B12 levels. Those with self-reported folic acid supplement use had higher B12 and lower homocysteine levels (Table 3). Maternal B12, folate and homocysteine showed strong positive correlation with the respective offspring indices (B12: r = 0.648, folate: r = 0.706, homocysteine: r = 0.756, all p < 0.0001) (Supplementary Figure S1a–c). Neonatal homocysteine showed negative correlation with maternal B12 and folate (B12: r = −0.409, p < 0.0001; folate: r = −0.346, p < 0.001; Supplementary Figure S2a,b).

3.2. Maternal B12 and Metabolic Risk of Offspring

Maternal B12 adjusted for age and BMI was inversely associated with metabolic risk factors such as triglycerides (r = −0.219; p = 0.047), HOMA-IR (r = −0.232; p = 0.041), homocysteine (r = −0.423; p = 0.0001) and positively with HDL-cholesterol (r = 0.315; p = 0.004) (Figure 1a–d) in the offspring. Despite similar birth weight, offspring of low B12 mothers had significantly lower HDL-cholesterol, higher triglycerides and homocysteine than those of normal B12 mothers (Table 2). Multiple regression analysis was carried out to assess whether maternal B12 independently associated with these metabolic risk factors in the offspring by adjusting for likely confounders. The model included maternal age, parity, smoking, folic acid supplement use, BMI, glucose, insulin, folate and homocysteine as independent variables. In addition, for offspring’s lipid parameters, respective maternal variable was also included in the model (maternal triglycerides for offspring’s triglycerides, etc.). After all these adjustments, maternal B12 was independently associated with the offspring’s HDL and homocysteine. Though similar trends were seen for the triglycerides and HOMA-IR, these were not statistically significant. No sex-specific changes were seen in any of these analyses (data not shown). Maternal B12 explained 5.1% of the variation in offspring’s HDL and 10.6% in homocysteine (Table 4). 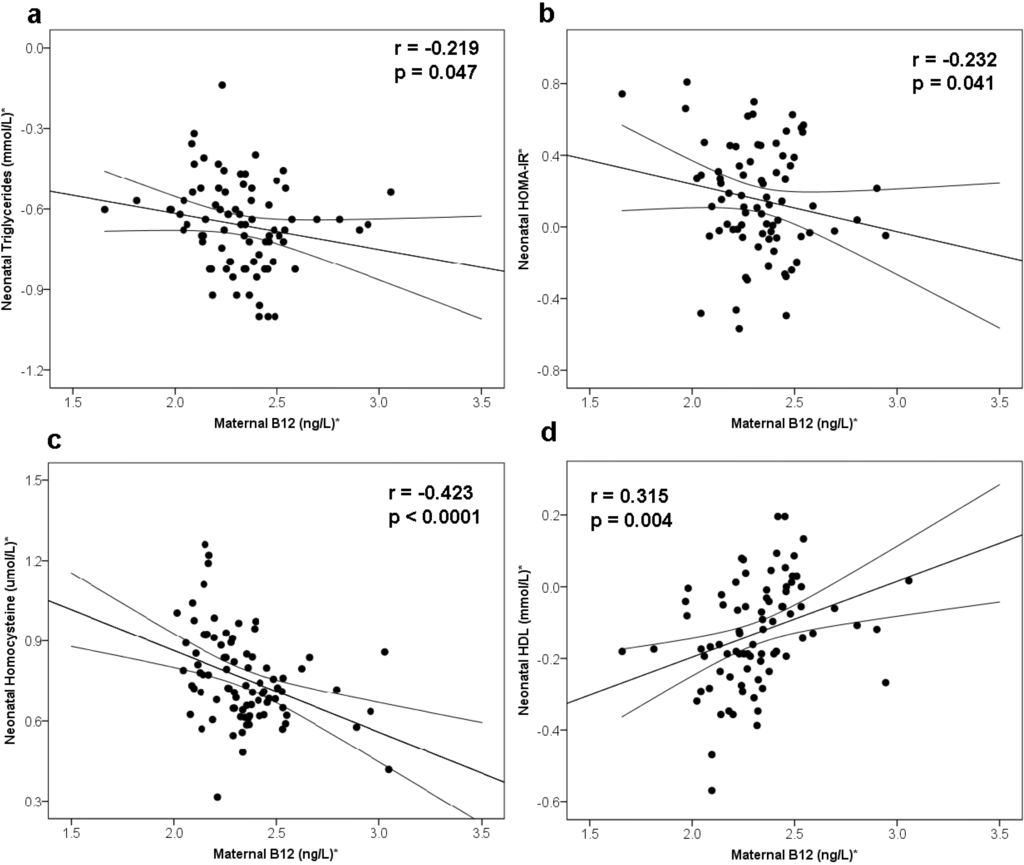 3.3. Maternal Folate and Homocysteine and Metabolic Risk of Offspring

The authors acknowledge all the clinic staffs including the labour ward at University Hospital Coventry Warwickshire (UHCW) and George Eliot Hospital (GEH), the assistance of clinical research nurses (Selvin Selvamoni and Jackie Farmer) and research coordinators (Amitha Gopinath and Karen Rouault) in supporting the recruitment of the women. The funding body did not have any input on the design, objectives or the analysis of the results.
The study was supported by Diabetes Research Fund, George Eliot NHS trust, Nuneaton, UK and RCUK block grant (funding open access publication charges).