Is the Inclusion of Animal Source Foods in Fortified Blended Foods Justified?
Next Article in Special Issue

To Legislate or Not to Legislate? A Comparison of the UK and South African Approaches to the Development and Implementation of Salt Reduction Programs
Previous Article in Journal

Accuracy of Canadian Food Labels for Sodium Content of Food

Assessing the Average Sodium Content of Prepacked Foods with Nutrition Declarations: The Importance of Sales Data

A point of departure was a representative national database on the availability of pre-packed foods on the market. The database was compiled using food labelling information from 6348 food products [36]. The food labelling information that was collected to create the database included labelled data on the nutritional composition, as well as the use of nutrition and health claims on labels. The sample included all foods on hand in selected food categories available in selected grocery stores at the time of sampling. Sampling was done in 2011 in four grocery stores of the most important retailers with a combined market share of 66% (one megamarket, two supermarkets and one discounter). The database was composed in agreement with the retailers where the data were collected. The selection of food categories was made according to Lalor et al. [37], with the addition of processed seafood, ready products, vegetable oils and plant-based imitations of milk and yoghurt. The following food categories were included: milk; yoghurts and fermented milk drinks; butter and spreads; cheeses; other dairy products; whole eggs; frozen fruits and vegetables; frozen ready meals; breakfast cereals; breads and similar products; fine bakery wares (biscuits); pasta and rice; fruit juice and smoothies; soft drinks and water; teas; peas, beans and lentils; processed meats; processed seafood; ready meals, full meals; ready meals, other; vegetable fats and oils; plant-based imitations of milk and yoghurt. The sample of foods therefore does not include some food categories, i.e., food supplements, alcoholic drinks, confectionery, unprocessed cereals and snacks. For the purpose of this research, foods in the database were classified in further subcategories, including butter; vegetable fat spreads; milk-based spreads; vegetable-based spreads; mayonnaise; frozen pizza; frozen savory dishes; frozen sweet dishes; breads; toasts; crackers; wafers; dry cured meat; fresh salamis and hot dogs; and canned meats.
In the next stage, the retailers were asked to provide 12-month, country-wide sales data for each product included in the database (January, 2011–December, 2011). Ensuring proper data handling, we were able to obtain sales data from retailers covering over 62% of the national market. The sales data only referred to the national market and presented sales of food products for the same year in which the abovementioned food composition database was compiled. This was arranged on the condition that the results would not reveal sales data of any particular retailer. The final sample of foods used in this study is composed of 5104 pre-packed food products for which 12-month sales data were available (80% of the sample). The sales data were given in universal form, including the European/International Article Number (EAN barcode), description of the product, number of products sold per year and the quantity of food (kg/L) per packaging. The matching of foods between the databases was performed using EAN barcodes.

2.3. Assessment of the Use of Sodium-Related Nutrition and Health Claims

The abovementioned database also included data on the use of nutrition and health claims on food labels. We analyzed the database to investigate the use of sodium-related nutrition and health claims in the sample of pre-packed food products for which 12-month sales data were available. We determined how common it is to use such claims and what kind of sodium-related claims are most commonly found on the products.

Using a representative national database on the availability of pre-packed foods on the market and 12-month, country-wide sales data for each product included in the database (n = 5,104), we calculated average sodium content in available prepacked foods (SCA) and in sold prepacked foods (SCS) for selected food categories. The results are presented in Table 1 and Figure 1. Food categories with the highest sodium content were processed meats (particularly dry cured meat), ready meals (especially frozen pizza) and cheese. In some food categories, the standard deviation was more distinct than in others due to the very different composition of foods in the food category. The biggest differences between SCA and SCS values were observed in the categories of butter and frozen savory dishes (ready meals). 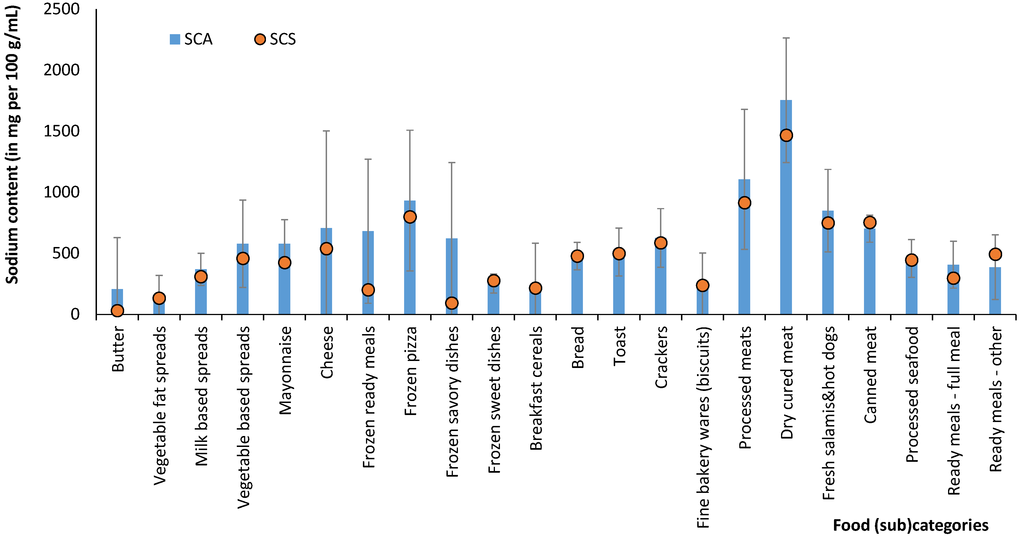 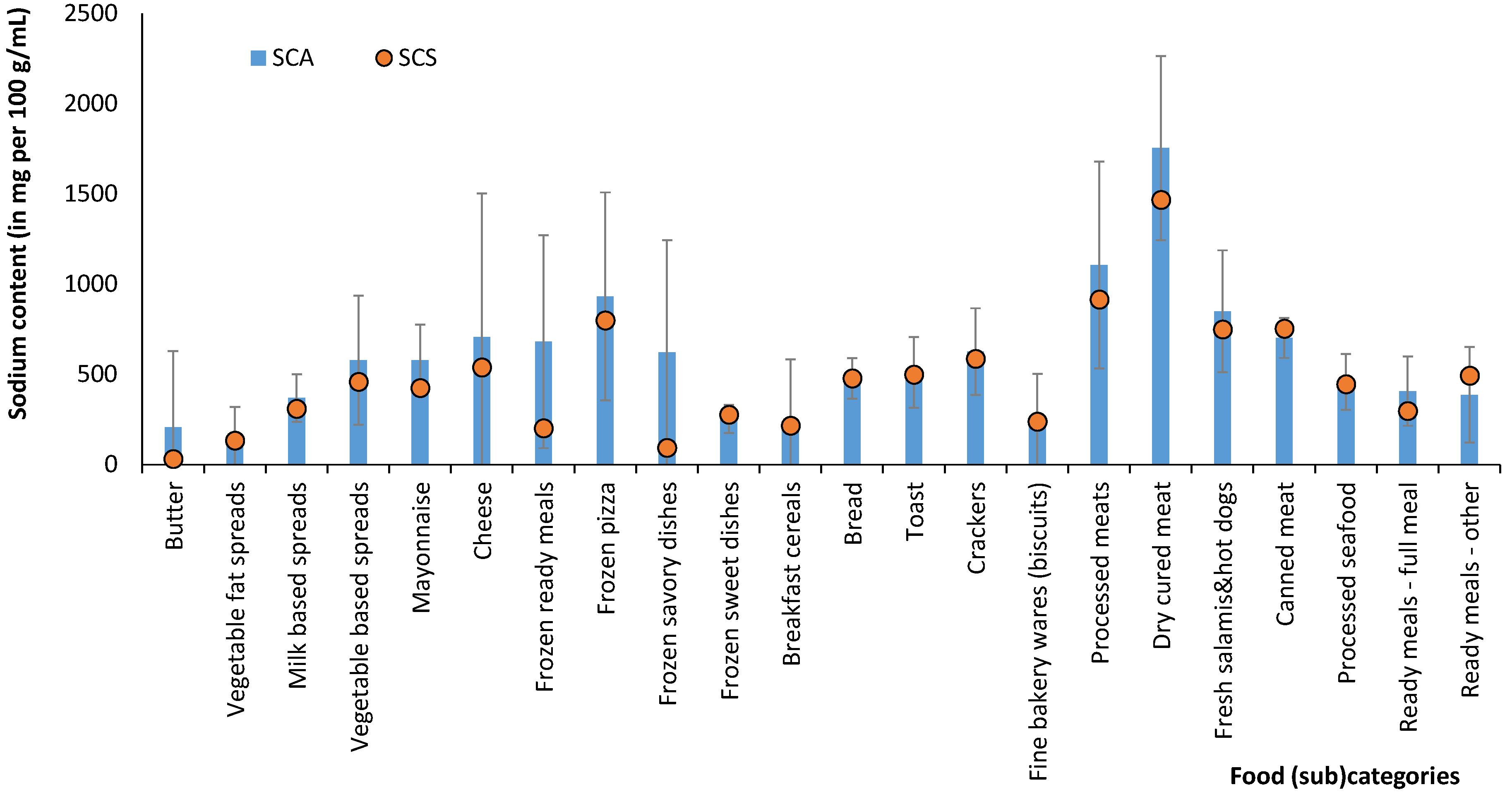 While in many countries sodium-reduction targets have been set for a large number of processed food categories, efficient assessment and monitoring are essential for evaluating related progress. Targeting sodium reduction in a small number of food categories and focusing on products sold in the highest volumes could lead to large decreases in sodium available for consumption and, therefore, to gains in public health [27]. A comparison of the average sodium content of specific food (sub)categories with (SCS) and without the use of weighting by sales (SCA) provides very useful information on the sodium content of the foods of market leaders in comparison to the average sodium content in a particular food category. In our study, we observed that in most food categories, SCS levels are lower than SCA levels, suggesting that market leaders in the Slovenian market have lower sodium contents than the category average (Table 1, Figure 1). One reason for such an observation could lie in consumers’ awareness of health risks related to high salt/sodium intake, but in general, this should be attributed to a combination of different factors, including price, brand, taste and texture expectations and consumers’ experiences with a particular food product. Our observations are only partially in line with the observations of Mhurchu et al., who performed a similar study in the U.K. market, but with a different methodological approach [27]. In a series of food groups, they observed that purchase-weighted means were higher than unweighted means; such food categories included bread (weighted vs. unweighted mean sodium content ratio (SAR, the ratio between SCA and SCS): 107%), processed meat (118%), breakfast cereals (126%) and milk (11%). On the other hand, below-average sodium levels were found in a series of other categories, e.g., in fish and fish products (92%) and processed vegetables (88%). Their study was based on 12-month consumption data for 21,108 British households collected through a commercial consumer panel. Panel members scanned and recorded all food and drink purchases brought into their homes. Data were available for over 40,000 food products. In contrast, our study is based on sales data provided by market leading food retailers, covering 62% of the national market (composed of over 800,000 households, [38]). The estimate of the percentage of the market covered by our study was made on the basis of available market share data of the retailers. We should mention significant differences in the market share of those retailers for different food categories. While in some food categories, sales of prepacked foods in retail stores represent the majority of sales, in other food categories, other sale routes are also significant. To evaluate this, we compared 12-month sales data of foods in our dataset with official national statistics on the average annual quantity of food and beverages consumed per household member [39]. The calculations revealed that our dataset covered the majority of purchased soft drinks (87%), about half of milk (41%), yoghurts (55%), butter (57%) and vegetable fat spreads (50%) and only 7% of bread, which is mostly sold in Slovenia as either a non-prepacked product or is widely available in specialized local bakery stores. Nevertheless, also in such food categories with a lower market share of prepacked products in retail stores, the volumes of products included in our calculations are significant. For example, our sample of bread exceeded the annual sales of 5000 tons of bread.
The highest sodium content was found in processed meat products (915 mg/100 g), particularly in dry cured meat (1467 mg/100 g). Our results are generally in line with the average sodium content of foods in Slovenia determined by Hlastan Ribič et al. using the Household Budget Survey and labelling information of prepacked foods and a combination of information from food composition databases and laboratory analyses of products available in households ([33], Table 2), except for dry cured meat, where we observed 18% lower average sodium levels. The observed SAR ratio in the whole category was 83%, quite lower than in the U.K. market (118%, [39]). Canned meat was a notable exception with an SAR ratio of 107% (98% in the U.K. study). We should also note the relatively low level of labelling of the sodium content of processed meats, particularly compared to certain other investigated food categories. Nutrition declarations are currently only compulsory in the EU for foods labelled with nutrition and/or health claims [21], and the proportion of foods with labelled nutrition information varies significantly between different food categories and countries. Interestingly, among all EU countries, the smallest proportion of foods with a nutrition declaration was found in Slovenia [40]. By the end of 2016, the inclusion of salt content on labelling will become mandatory for all processed prepacked foods in the EU [41]. This will enable the inclusion of a number of additional available foods to further studies and significantly contribute to the even greater reliability of the results.

We have shown that a combination of 12-month food sales data provided by food retailers covering the majority of the national market and a comprehensive food composition database compiled using food labelling data represent a robust and cost-effective approach to assess the sales-weighted average sodium content of prepacked foods. Such an approach is a useful tool for monitoring the sodium content of processed foods on the market and shifts in purchasing behavior. Food categories with the highest sodium content were processed meats (particularly dry cured meat), ready meals (especially frozen pizza) and cheese. In some food categories, the standard deviation was more distinct than in others due to the different composition of specific products on the market. The biggest differences between the weighted and non-weighted average sodium content of prepacked foods were observed in the categories of butter and frozen savory dishes (ready meals). The reported results show that in most investigated food categories, market leaders in the Slovenian market have lower sodium contents than the category average. Analyses of the use of salt-related claims on foods on the market showed that only 1% of the investigated food products (whole sample) were labelled with sodium-related nutrition claims, and no sodium-related health claims were found. The sodium-related claims most frequently observed were low sodium and no added sodium, mainly found on products in the category of breakfast cereals.

The authors would like to thank the retailers that granted access to their stores and sales data (Mercator d.d., Spar Slovenija d.o.o.) and to Elizabeta Mičović (Ministry of Agriculture and the Environment, the Administration of the Republic of Slovenia for Food Safety, Veterinary and Plant Protection), who helped us in discussions and negotiations with the retailers. We also acknowledge Dr. Anita Kušar (Nutrition Institute, Slovenia) for her help in the data collection and classification and Murray Bales for providing assistance with the language. The work was financially supported by the Ministry of Agriculture, Forestry and Food of the Republic of Slovenia, the Slovenian Research Agency (Contract 1000-11-282007, Research Project V7-1107) and by the European Community’s Seventh Framework Programme (FP7/REDICLAIM Project, URL: www.rediclaim.eu, Grant Agreement No. 603036).