Are the Dietary Guidelines for Meat, Fat, Fruit and Vegetable Consumption Appropriate for Environmental Sustainability? A Review of the Literature
Previous Article in Journal

Glycemic Response of a Carbohydrate-Protein Bar with Ewe-Goat Whey

In this study we examined the glycaemic index (GI) and glycaemic load (GL) of a functional food product, which contains ewe-goat whey protein and carbohydrates in a 1:1 ratio. Nine healthy volunteers, (age, 23.3 ± 3.9 years; body mass index, 24.2 ± 4.1 kg·m2; body fat %, 18.6 ± 10.0) randomly consumed either a reference food or amount of the test food both with equal carbohydrate content in two visits. In each visit, seven blood samples were collected; the first sample after an overnight fast and the remaining six at 15, 30, 45, 60, 90 and 120 min after the beginning of food consumption. Plasma glucose concentration was measured and the GI was determined by calculation of the incremental area under the curve. The GL was calculated using the equation: test food GI/100 g available carbohydrates per test food serving. The GI of the test food was found to be 5.18 ± 3.27, while the GL of one test food serving was 1.09 ± 0.68. These results indicate that the tested product can be classified as a low GI (<55) and low GL (<10) food. Given the health benefits of low glycaemic response foods and whey protein consumption, the tested food could potentially promote health beyond basic nutrition.
Keywords: glycaemic index; glycaemic load; functional food glycaemic index; glycaemic load; functional food

Functional foods are defined as “foods that, by virtue of the presence of physiologically-active components, provide a health benefit beyond basic nutrition” [1]. As consumer interest in functional dietary items is increasing, there is a need to evaluate all physiologically active components and their role in health promotion [2,3]. Furthermore, their ability to impact metabolic parameters and chronic disease, such as diabetes, cardiovascular disease and cancer is of great interest to health-policy makers and the food industry.
One of the food properties that may enhance health is its glycaemic response, which relates to its glycemic index (GI) and glycaemic load (GL) [4,5]. GI is an estimate of the glycaemic effect of available carbohydrate in a food on blood glucose levels compared to the effect of an equal amount of glucose [6]. GL relates the GI to a specific food serving. Implementation of low glycaemic index (LGI) and/or low glycaemic load (LGL) diets benefit metabolic profiles [4,5,7,8,9] and leads to prevention or slower progression of several types of cancer [10]. Additionally, consuming meals that result in a high glycaemic response may lead to transformation of metabolic pathways, increased appetite, overeating, and increased body mass and body fat [11]. In contrast, both short-term and long-term studies demonstrate that the consumption of LGI or LGL foods, in conjunction with reduced energy intake, assists weight and fat mass reduction [7,8,12,13]. Therefore, foods giving a low glycaemic response may have a profound effect in morbid conditions related to obesity.
In this study we tested a commercially available bar made with organic ingredients. It has a carbohydrate:protein ratio of 1:1 and is considered as a functional product due to its ewe-goat whey content, which has health-enhancing properties [14,15,16]. Given the rapid rise in metabolic disease and obesity in both adults and children [17], there is a great need to better communicate the GI/GL profile of foods to consumers. Therefore, the objective of this study was to determine the GI and GL of a special carbohydrate-protein bar in a healthy population. Results may give further support to the health enhancing properties of this and similar products and enrich the database of GI-labeled and marketed functional food products.

Eleven healthy recreationally active men (n = 5) and six women (n = 6) were initially recruited. Two women failed to complete the experimental process due to personal reasons. Inclusion criteria included the absence of any clinical symptoms or chronic diseases as determined by a health questionnaire. Exclusion criteria included the presence of gastrointestinal disease or metabolic disease, medication treatment (including nutritional supplements), current pregnancy, lactation or following a specific diet regime. A written informed consent was provided by all participants after they had been informed of all risks, discomforts and benefits involved in the study. The procedures were in accordance to the 1975 Helsinki declaration, and approved by the Institutional Review Board of the University of Thessaly, Greece.

According to recommendations by FAO/WHO [18] for the measurement of GI, participants underwent two different trials after overnight fasting separated by at least seven days. In the trials, they consumed in random order either the reference food (250 mL aqueous solution containing 50 g of glucose), or test food of equal carbohydrate content and 250 mL of water. At each visit, blood samples were taken after 12 h fasting at baseline (0 min) and at times 15, 30, 45, 60, 90 and 120 min after the consumption of food. Τhe consumption of the reference or test food was completed within 15 min. No other food or liquid intake was allowed for the next 120 min. Participants were asked to refrain from alcohol, caffeine, and exercise for the two days prior to each trial.

The test food was an organic chocolate- orange flavored bar, which has a carbohydrate:protein:lipid content ratio of 2:2:1. Protein extracts used to prepare the bar derived from ewe-goat milk whey protein. The bar is produced in Greece and is sold under the commercial name “50/50 Feta Bar” by Eatwalk Hellas. Nutritional analysis of the test food is shown in Table 2. The serving size is considered 70 g and all participants consumed an amount of the test food (167 g) that corresponded to 50 g available carbohydrate content. The exact amount of the test food was determined using an analytical balance (Kern ALS 120-4, Balingen, Germany). An aqueous glucose solution containing 50 g of glucose was used as the standard food (Top Star 50, Toplabs, Portugal).

Table 2. Nutritional analysis of the test food and portion percentage of the average daily dietary values.

A flexible catheter was inserted into an antecubital vein and blood was drawn at 0, 15, 30, 45, 60, 90 and 120 min. Blood (7 mL) was drawn at each time point into ethylenediamine tetra-acetic acid (EDTA) tubes which were immediately placed on ice. Following each blood sampling, the catheter was flushed with 2–3 mL saline to prevent blood clotting. A portion (1–2 mL) of the blood collected was used to determine the parameters of the complete blood count measured by an automatic biochemical analyzer (Mythic 18 Orphée, Orphée Medical, Geneva, Switzerland). The remaining blood was centrifuged at 4 °C, 1370 g for 10 min for separation of plasma in a refrigerated centrifuge (Heraeus Biogigure Primo, Thermo Scientific, Waltham, MA, US). Then the collected supernatant was transferred to Eppendorf tubes (Eppendorf TM, Sarstedt AG & Co., Nümbrecht, Germany). The samples were stored at −80 °C and thawed only once before analysis. Plasma glucose concentration was determined using a biochemical analyzer (Clinical Chemistry Analyzer Z 1145-Zafiropoulos Diagnostica, Koropi, Greece).

In order to ensure that the last meal preceding the trials did not affect glycaemic response results, participants were instructed to record their evening meal prior to their first trial; this food intake was replicated the evening before the second trial [19]. Each participant was provided with a written set of guidelines for monitoring dietary consumption and a record sheet for recording food intake. Diet records were subsequently analyzed using the computerized nutritional analysis system DietSpeak© (DietSpeak Hellas, Athens, Greece).

GI was calculated with the method of incremental area under the curve (iAUC) ignoring the area under baseline. Specifically, F:R were calculated, where F is the mean iAUC for a group of participants after consuming the test food and R is the mean iAUC for the same group of participants after consuming the reference food [18]. Then the following equation was used to determine the GI of the product [6,18,19]:
GI = iAUC (50 g available carbohydrates of the test food)/iAUC (50 g carbohydrates of the reference food) × 100
GL of one serving was calculated as follows:
GL = [GI × available carbohydrate in one serving (g)]/100
Baseline values in the two trials were compared by paired t-test. p-Values were considered significant at p < 0.05. Results are presented as (Mean ± SD) apart from GI, GL values and Figure 1 (Mean ± SEM). 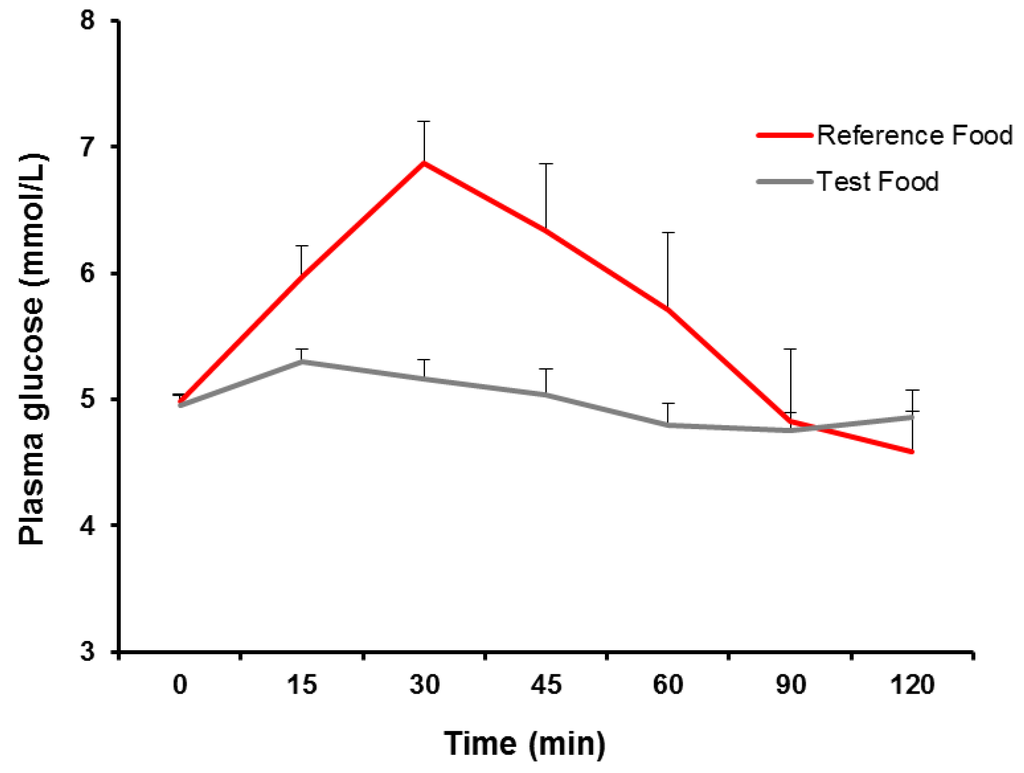 The present data revealed that the tested product of 21.6 g protein and 21.1 g carbohydrates can be classified as LGI and LGL. Given the multiple health effects, the tested food could potentially be part of a health promoting diet for both patients and healthy individuals.