Mediterranean Diet and Diabetes: Prevention and Treatment
Next Article in Special Issue

A Study of the Effects of Latent Iron Deficiency on Measures of Cognition: A Pilot Randomised Controlled Trial of Iron Supplementation in Young Women
Previous Article in Journal

Identifying Critical Nutrient Intake in Groups at Risk of Poverty in Europe: The CHANCE Project Approach

Comparison of Two Doses of Elemental Iron in the Treatment of Latent Iron Deficiency: Efficacy, Side Effects and Blinding Capabilities

Adherence to iron supplementation can be compromised due to side effects, and these limit blinding in studies of iron deficiency. No studies have reported an efficacious iron dose that allows participants to remain blinded. This pilot study aimed to determine a ferrous sulfate dose that improves iron stores, while minimising side effects and enabling blinding. A double-blinded RCT was conducted in 32 women (18–35 years): 24 with latent iron deficiency (serum ferritin < 20 µg/L) and 8 iron sufficient controls. Participants with latent iron deficiency were randomised to 60 mg or 80 mg elemental iron or to placebo, for 16 weeks. The iron sufficient control group took placebo. Treatment groups (60 mg n = 7 and 80 mg n = 6) had significantly higher ferritin change scores than placebo groups (iron deficient n = 5 and iron sufficient n = 6), F(1, 23) = 8.46, p ≤ 0.01. Of the 24 who completed the trial, 10 participants (77%) on iron reported side effects, compared with 5 (45%) on placebo, but there were no differences in side effects (p = 0.29), or compliance (p = 0.60) between iron groups. Nine (69%) participants on iron, and 11 (56%) on placebo correctly guessed their treatment allocation. Both iron doses were equally effective in normalising ferritin levels. Although reported side-effects were similar for both groups, a majority of participants correctly guessed their treatment group. View Full-Text
Keywords: ferrous sulfate; side effects; women; serum ferritin ferrous sulfate; side effects; women; serum ferritin
►▼ Show Figures 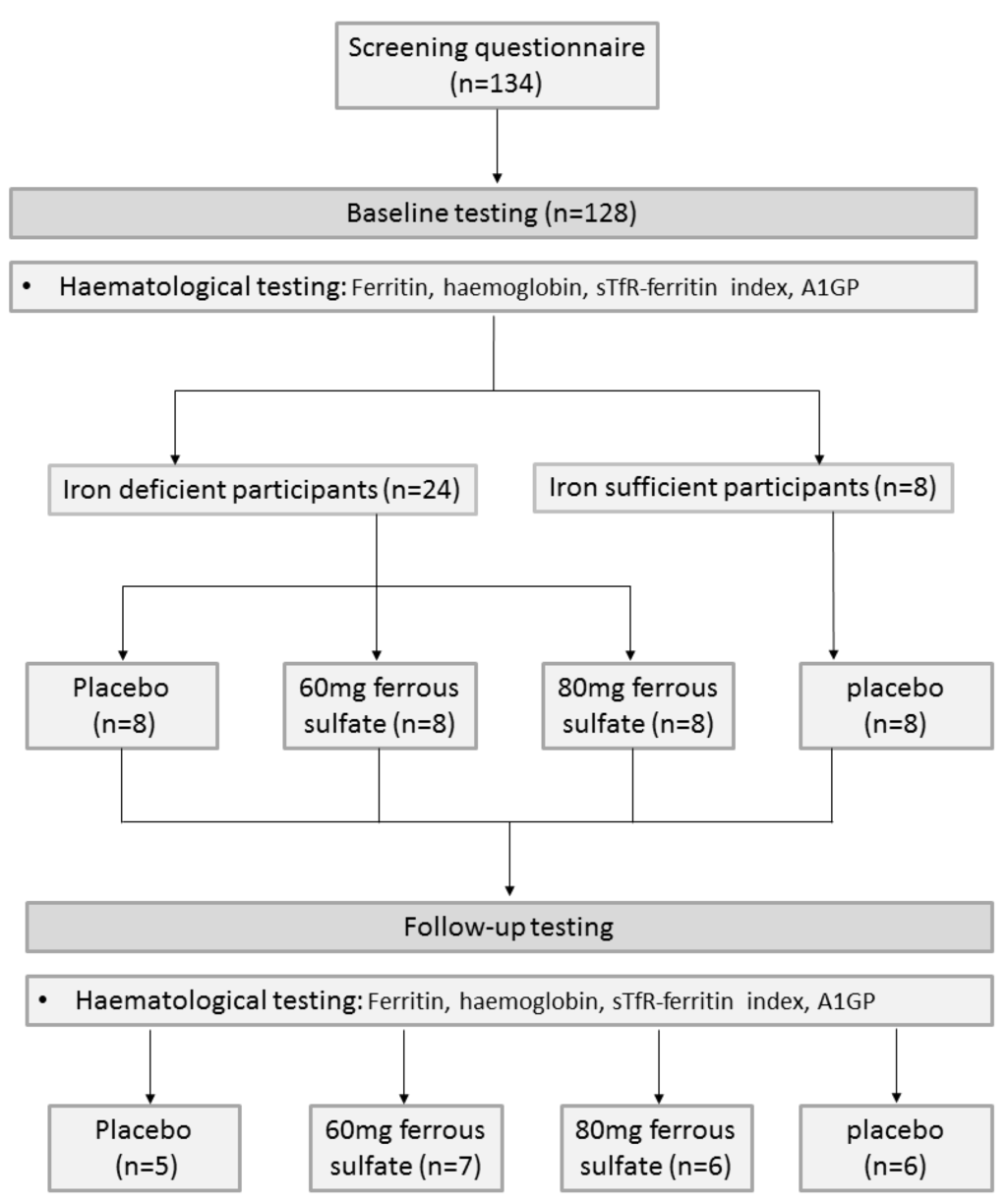