Nitrate Ingestion: A Review of the Health and Physical Performance Effects

Anti-Inflammatory Activity of Fruit Fractions in Vitro, Mediated through Toll-Like Receptor 4 and 2 in the Context of Inflammatory Bowel Disease

The gastrointestinal tract uses a system of tolerance and controlled inflammation to limit the response of bacteria-derived antigens in the gut resulting in mutual benefit for both the host and the host microbiota [1]. When this complex system breaks down by a pathogenic insult in a genetically predisposed individual, the resulting immune response may lead to inflammatory bowel disease (IBD) [1].
In normal conditions, when pattern recognition receptors (PRRs) on the surface of cells are triggered by noxious conditions such as bacterial antigens, acute inflammation is activated to remove the triggering insult [2]. A successful acute inflammatory response results in the elimination of the infectious agent followed by resolution of inflammation and tissue repair [3]. However, in abnormal conditions such as IBD, prolonged inflammation can occur leading to increased tissue damage in the inflamed area [4].
Prolonged inflammation may also lead to epithelial cell necrosis (caused by excessive inflammation and tissue injury) and the subsequent release of damage-associated molecular pattern molecules (DAMPs) [5]. DAMPs have the ability to activate PRRs such as Toll-like Receptors 2 and 4 (TLR2 and TLR4) [6,7], and in turn induce further secondary inflammation in a repeating cycle that ultimately results in self-sustaining chronic inflammation [8]. DAMPs in combination with increased sensitivity to bacteria [9,10,11] can result in the over activation of PRRs and lead to chronic inflammation.
The primary focus for treating IBD disease is to reduce the flare-ups in the bowel when the disease is active and to keep inflammation at normal levels during time of remission [12]. Unfortunately the treatments that are currently available for IBD have limited success and are not effective on some patients, while others have significant side effects [13,14]. Limited success of treatment suggests the need for complementary intervention. One such method includes dietary intervention to help improve the management of IBD.
Evidence suggests that fruits have a wide variety of plant polyphenols that have anti-inflammatory properties and are increasingly regarded as effective protective agents against disease [15,16,17,18,19,20,21,22]. Therefore, to identify fruits that are relevant to study in relation to TLRs and chronic inflammatory diseases, we have used an in vitro screen to study the ability of hydrophilic and hydrophobic extracts from 12 fruits to modulate the inflammatory response by activation of PRRs including TLR4, TLR2/1 and TLR2/6. In this study, we show that several fruit extracts from strawberry, blackberry and feijoa have the ability to mediate an anti-inflammatory effect, when inflammation is stimulated through PRRs. Results from our study suggest that these fruits or fruit extracts can be further developed to be used as a complementary intervention to improve the management of IBD patient treatment.

Twelve fruits were selected for screening based on their polyphenol content and evidence of their anti-inflammatory properties (Table 1). Selection criteria for each of these fruits are listed in Table 1.

Table 1. Fruits selected for screening and the criteria used to select these fruits.

HEK-blue hTLR2 and hTLR4 cells were seeded into 96 well plates at a cell density of 4 × 105 cells/mL in DMEM containing sodium pyruvate and l-glutamine supplemented with 10% FBS. The plates were then incubated overnight at 37 °C, 5% CO2 incubator. Fruit fractions 2 to 11 were made up in DMEM containing sodium pyruvate and l-glutamine supplemented with 10% FBS. The top concentration of the fruit fractions used for the TLR4 was 1:8 of each fraction (equivalent to 17.8 mg of whole food) and for the TLR2 assay was 1:60 of each fraction (equivalent to 2.4 mg of whole food). This was then serially diluted 2-fold to make up a total of 4 dilutions of each fraction. A lower dose for the fruit fractions was used because the HEK-blue hTLR2 cell line gave cytotoxic results at the doses used for the TLR4 screen.
Controls included 100 ng/mL ultrapure LPS (TLR4 ligand) to ensure no hTLR4 cells contaminated the hTLR2 assay, 100 ng/mL PAM3CSK4 (TLR2 ligand) to ensure no hTLR2 cells contaminated the hTLR4 assay, 0.25 μg/mL Phorbol myristate acetate (PMA; NFKβ stimulator) and media. Solvent control contained 20% DMSO and 80% autoclaved Milli-Q water. 20 μL of either the fractions or controls was added into each well 48 h after cell seeding.
The plates were then placed back in the incubator for an hour. Following the incubation, a further 20 μL of either media or one of three TLR ligands were added. The ligand added was either 3.125 μg/mL LPS (Ultrapure, Invivogen, San Diego, CA, USA) to stimulate TLR4, 10 ng/mL PAM3CSK4 (Invivogen, San Diego, CA, USA) which stimulated TLR2/TLR1, or 10 ng/mL Pam2CGDPKHPKSF (FSL-1) (Invivogen, San Diego, CA, USA) which stimulated TLR2/TLR6. Then, the plates were incubated for a further 4 h.
To measure the expression of NFKβ, Quanti-blue (QB, Invivogen, San Diego, CA, USA) was used as per the manufacturer’s instructions. At the end of the 4 h incubation, 40 μL of the cell supernatant was transferred from the cell plate into a new plate containing 100 μL per well QB and left incubating at room temperature for 1 h. After the hour all QB plates were read using a plate reader (Multiskan, Thermo Labsystems, Waltham, USA) at a test wavelength of 650. The anti-inflammatory activity score for each fruit fraction was calculated by subtracting the QB score for the solvent from the QB score of the individual fractions. The equation is summarized as follows:
To measure cytotoxicity induced by the ligand, 2-(4-iodophenyl)-3-(4-nitrophenyl)-5-(2,4-disulfophenyl)-2H-tetrazolium, monosodium salt (WST-1) (Roche, Basel, Switzerland) was used according to the manufacturer instructions. WST-1 is a reagent used for the measurement of cellular proliferation, viability, and cytotoxicity using a colorimetric assay. 20 μL of WST-1 was added into the cell plate after the supernatant for QB was removed and further incubated for an hour at 37 °C. Inflammation increased the cell’s metabolic activity which resulted in a high WST-1 score. If a fraction is anti-inflammatory, the cytotoxicity score goes down. In order to avoid the confounding effect of ligand induced inflammation on the WST-1 score, media without ligand was used as a reference. A WST-1 score below 80% was considered cytotoxic. The cytotoxicity score was based on the WST-1 measurement and was calculated as follows: 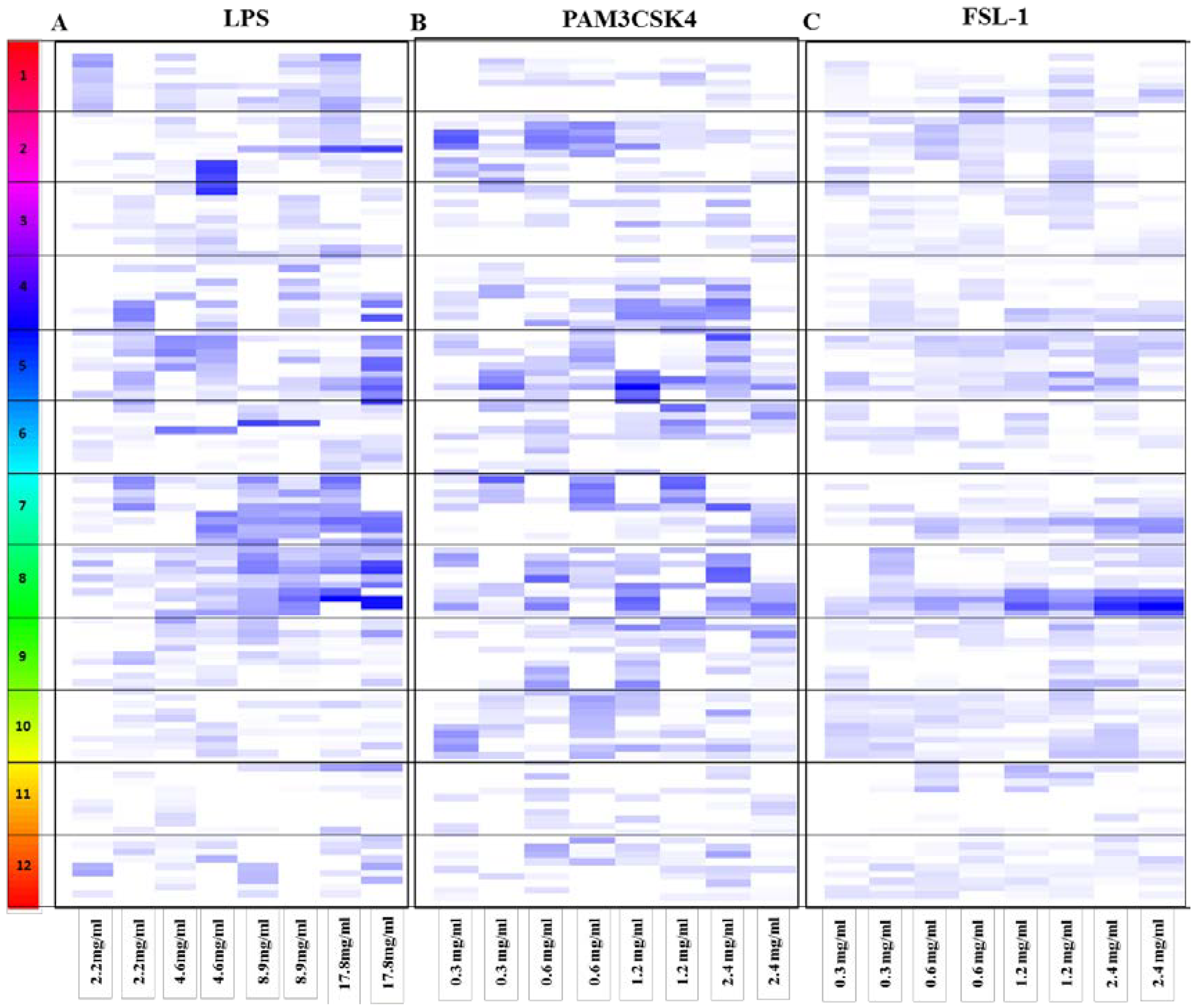 3.2. Dose Response for the Anti-Inflammatory Extracts

One of the goals of IBD therapies is to reduce inflammation. Therefore identifying anti-inflammatory dietary sources would be ideal in managing inflammatory diseases such as IBD. In this study we used a high throughput screen to identify fruit fractions that have an anti-inflammatory effect. Twelve fruits were screened with varying results. From this study some useful candidates have been identified and in particular feijoa. Further studies into the involvement of these candidates in the PRR pathway can lead to better understanding of how these fruit can help personalize nutrition for better management of disease in the future.

I would like to thank Nutrigenomics New Zealand for providing the fruit fractions and Ministry of Business, Innovation and Employment (MBIE) for financial support for this work and the Kate Edger Educational Charitable Trust for funding me during the writing of this paper.

Noha Ahmed Nasef performed all the experiments, analysis and wrote the manuscript. Sunali Mehta made major contributions to experimental design, data analysis and manuscript writing. Lynnette R. Ferguson supervised the project and Gareth Marlow and Pamela Murray provided guidance on the development of the screening assays.