Factors Associated with Adherence to the Mediterranean Diet among Adolescents Living in Sicily, Southern Italy
Previous Article in Journal

Calcium-Alkali Syndrome in the Modern Era

CSE was dissolved in DMSO and filtered with a Millipore membrane filter (0.45 μm) prior to HPLC analysis. Analysis of the phenolic compounds was conducted using an Agilent 1100 series HPLC equipped with a diode array detector (DAD). The dissolved sample was separated on a Nucleosil 100-5 C18 column (250 mm × 4.0 mm i.d., 5 μm particle size). The mobile phase was composed of two solvents: solvent A was a mixture of water/formic acid (pH 3.29), and solvent B was 100% acetonitrile/formic acid (pH 3.29). An elution gradient was performed as follows: initially 7.0% of solvent B, followed by 0% to 15% B over 25 min, 30% B at 35 min, 40% B at 50 min, 100% B at 45 min, 100% B at 55min, 50% B at 60 min, 50% B at 63 min, 0% B at 64 min, and 0% B at 73 min. The flow rate was 1.0 mL/min, and the column temperature was 30 °C.
The DAD acquisitions were integrated at 280 nm (for gallic acid, 4-hydroxy benzhydrazide, epigallocatechin, epicatechin, epigallocatechin gallate, vanillic acid, (+)-catechin hydrate, syringic acid, phloroglucinol, catechin gallate, gallocatechin, protocatechuic acid, p-anisic acid, and 3-(3,5-dimethyl-pyrazol-1-yl) benzoic acid), 320 nm (for chlorogenic acid, caffeic acid, p-coumaric acid, trans-ferulic acid, naringin, 2-amino-3,4-dimethyl-benzoic acid, coumarin, morin hydrate, luteolin, hesperetin, alizarin, biotin, and trans-chalcone), and 370 nm (for rutin hydrate, myricetin, quercetin hydrate, quercetin dihydrate, rhein, 3-hydroxyflavone, kaempferol, and emodin). The identification of the phenolic acids and flavonoids was achieved by comparing retention times.

2.5. Determination of in Vitro Antioxidant Capacity

The 3T3-L1 adipocytes, provided American Type Culture Collection (ATCC, CL-173, Manassas, VA, USA), were cultured and differentiated into adipocytes according to the method of Blumberg et al. [27]. The 3T3-L1 cells were cultured in DMEM containing 10% (v/v) BS and penicillin in a humidified atmosphere of 95% air and 5% CO2 at 37 °C. The medium was replaced every 2 days. The 3T3-L1 cells were trypsinized and reseeded in 24-well plates before they reached confluency. After they reached confluence, the cells were maintained for 2 days. Then, preadipocytes were induced to differentiate into adipocytes by DMEM supplemented with 10% (v/v) FBS, 10 mg/mL insulin, 1 mM IBMX, and 0.1 mM DEX. Two days later, the medium was exchanged to DMEM supplemented with 10% FBS and 10 mg/mL insulin, and refreshed every other day.

To determine the lipid accumulation, the 3T3-L1 cells were stained with Oil Red O as described Blumberg et al. [27] with slight modifications. After 8 days, the cells were washed with phosphate-buffered saline (pH 7.4) twice and fixed to the plates with 10% formaldehyde for 1 h. Following fixation, each well was washed with 60% isopropanol and completely dried. An Oil Red O stock solution was made by combining 2 g of Oil Red O powder with 100 mL of an isopropanol and distilled water mixture at a ratio of 60:40 (v/v). Then, the cells were stained with the Oil Red O stock solution for 15 min at room temperature, washed four times with distilled water, and dried. The red dye retained in the cells was eluted into isopropanol and quantitated with a microplate reader (Molecular Devices, Sunnyvale, CA, USA) at 490 nm.

All experiments were repeated three times. Data are presented as the means ± standard deviation. The data were analyzed by one-way analysis of variance (ANOVA), and all the grouped data were evaluated by one-way analysis of variance followed by the least significant difference test using the SAS package (SAS Institute, Cary, NC, USA) version 9.2. Values with p < 0.05 were considered significantly different between the treatments.

3.1. Total Phenolic and Flavonoid Contents of CSE and Its Phenolic Compounds

The total phenolic and flavonoid contents of CSE were 126.0 ± 2.4 mg GAE/g and 62.2 ± 1.9 mg QE/g, respectively (Table 1). The phenolic compounds of the Carthamus tinctorius L. seed were analyzed by HPLC.

3.2. Effects of CSE on in Vitro Antioxidant Capacity 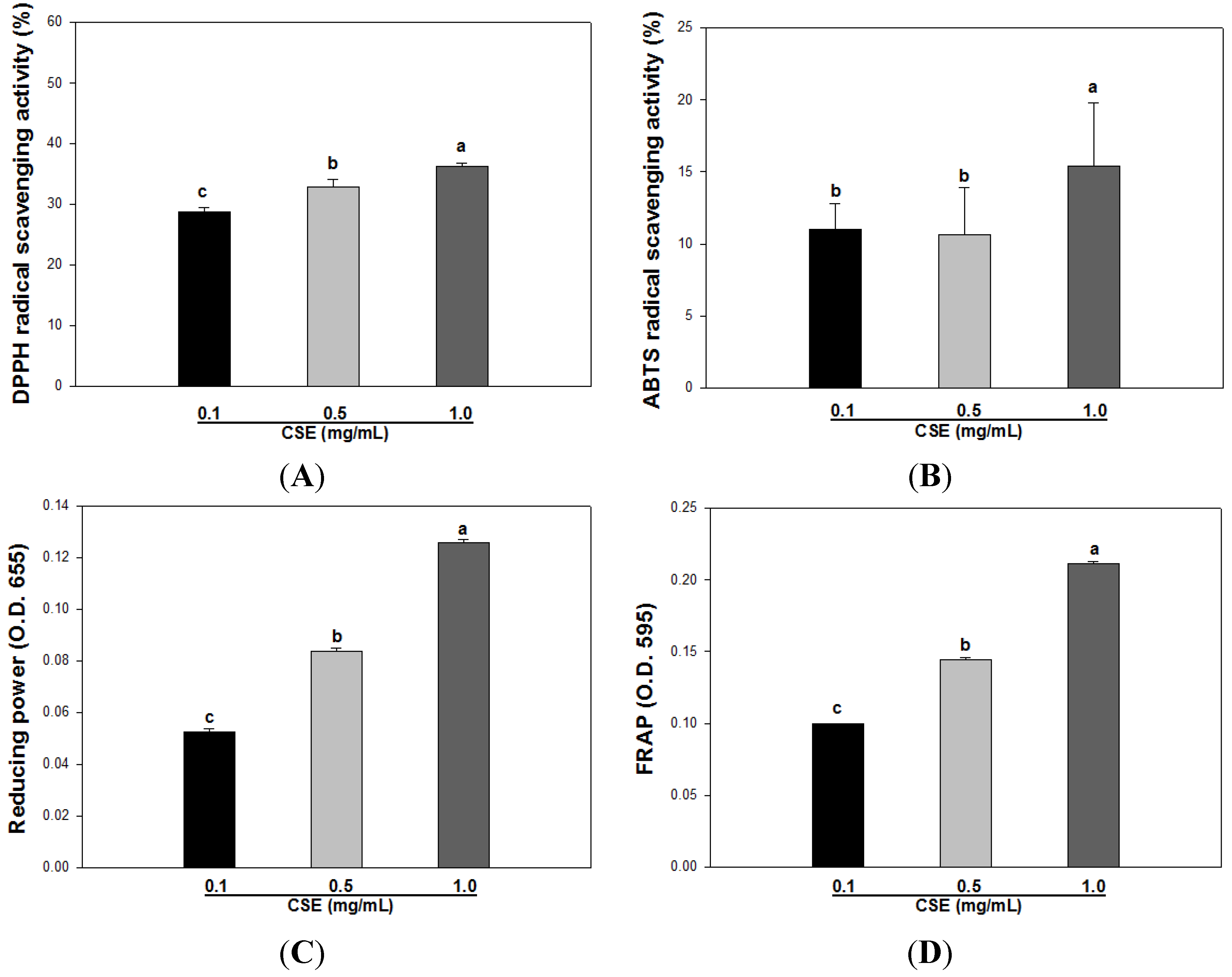 Table 3. Correlation coefficients (R2) between 2,2-diphenyl-1-picrylhydrazyl (DPPH), 2,2′-azino-bis(3-ethylbenzothiazoline-6-sulphonic acid) (ABTS), Ferric reducing antioxidant power (FRAP), and the reducing power of Carthamus tinctorius L. seed extract (CSE).
* Correlation is significant at p < 0.05; ** Correlation is significant at p < 0.01.
The ORAC value of CSE is illustrated in Figure 2. Figure 2A presents the decay curve of fluorescein with or without CSE. Figure 2B shows the ORAC value of CSE at a concentration of 0.1 mg/mL, which was 62.9 ± 4.7 μM TE/g.

XTT was used to detect the cell viability of CSE on 3T3-L1 cells. According to the results, different concentrations of CSE had no significant inhibitory effects on 3T3-L1 preadipocyte proliferation after a 24 h incubation period (Figure 3). When the absorbance values obtained in the culture media without CSE were expressed as 100% ± 15.3%, the absorbance values obtained after CSE treatments of 50, 100, and 200 μg/mL were 105 ± 4.5, 109 ± 3.8, and 115% ± 3.4% after 24 h of incubation, respectively. CSE has no cytotoxicity for a concentration range up to 200 μg/mL and was used for the anti-adipogenic activity test. 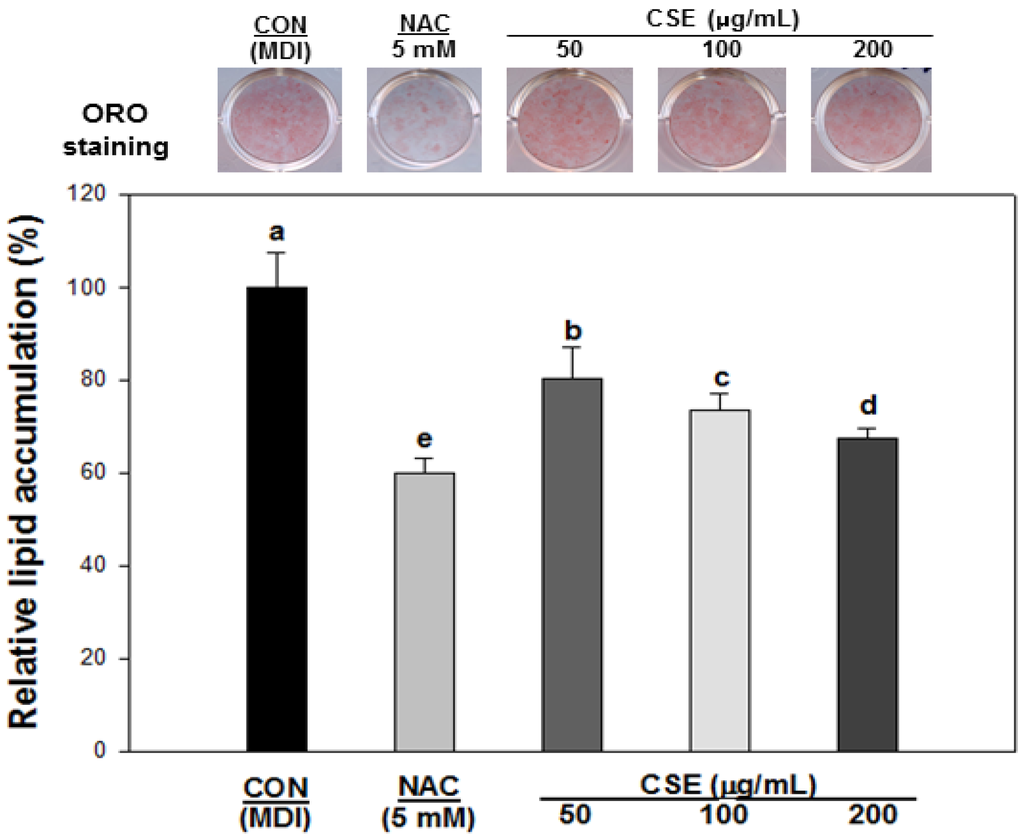 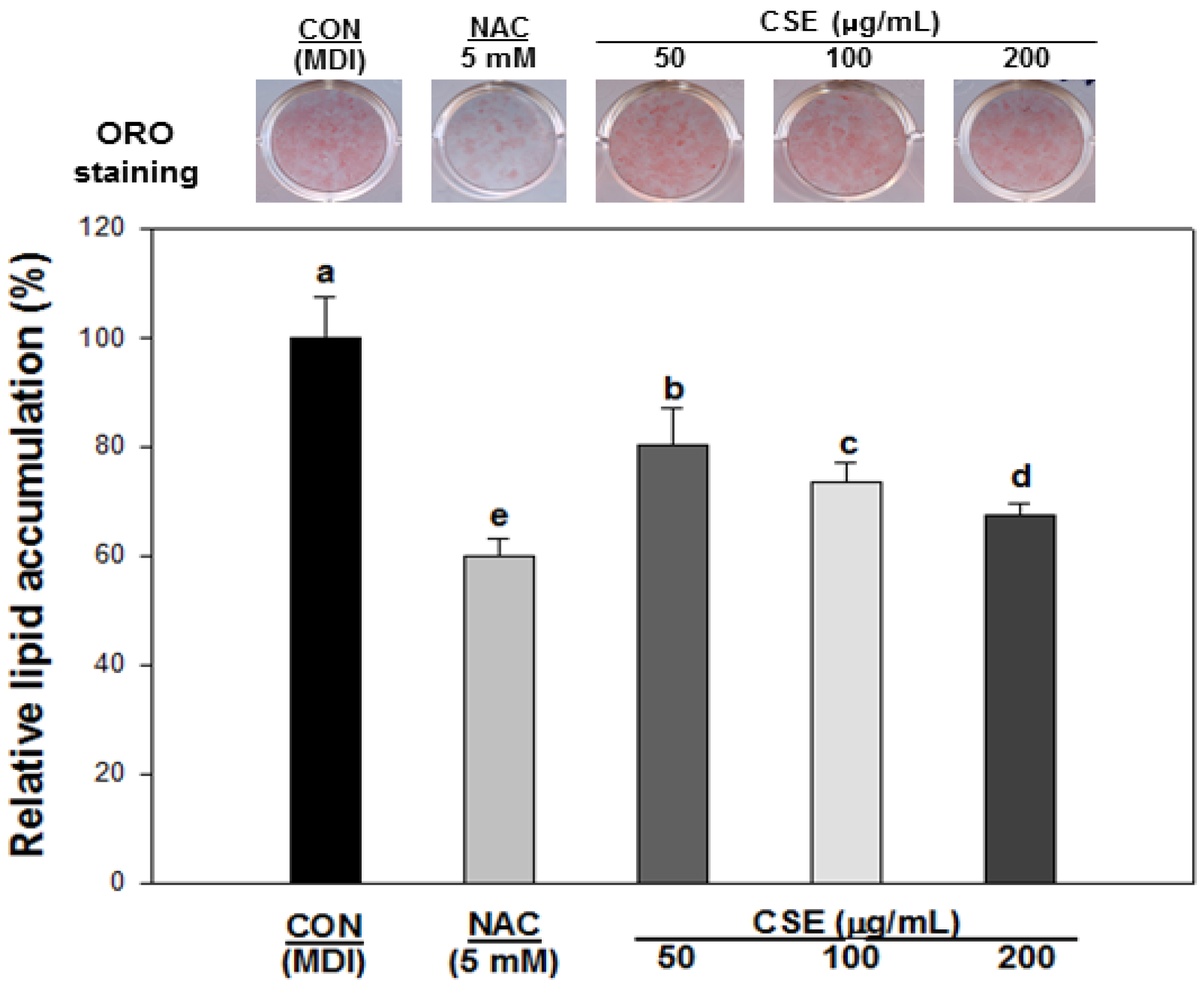 We assessed the suppressive effects of CSE on adipocyte differentiation using Oil Red O staining during the differentiation of 3T3-L1 preadipocytes. The cells were incubated in the presence or absence of CSE (50, 100, and 200 μg/mL) for 8 days, and 5 mM NAC was used as a positive control. The lipid accumulation in 3T3-L1 cells is shown in Figure 4. When preadipocytes differentiated into adipocytes, the lipid accumulation in cells treated with CSE was markedly inhibited in a dose-dependent manner.

Through various experiments, CSE presented various phenolic compounds and exhibited the ability to help regulate the redox system as well as suppress lipid accumulation in 3T3-L1 adipocytes. Therefore, these results indicate that Carthamus tinctorius L. seeds might be a potent natural resource that can be used in various applications, such as in therapy and in functional foods. We suggest that further studies based on this study are needed to elucidate the effect of CSE on anti-oxidative activity as well as its effect on adipogenesis