The Australian Paradox: A Substantial Decline in Sugars Intake over the Same Timeframe that Overweight and Obesity Have Increased

Ecological research from the USA has demonstrated a positive relationship between sugars consumption and prevalence of obesity; however, the relationship in other nations is not well described. The aim of this study was to analyze the trends in obesity and sugar consumption in Australia over the past 30 years and to compare and contrast obesity trends and sugar consumption patterns in Australia with the UK and USA. Data on consumption of sugar in Australia, the UK and USA were obtained from the Food and Agriculture Organization for the years 1980–2003. The prevalence of obesity has increased 3 fold in Australians since 1980. In Australia, the UK and USA, per capita consumption of refined sucrose decreased by 23%, 10% and 20% respectively from 1980 to 2003. When all sources of nutritive sweeteners, including high fructose corn syrups, were considered, per capita consumption decreased in Australia (−16%) and the UK (−5%), but increased in the USA (+23%). In Australia, there was a reduction in sales of nutritively sweetened beverages by 64 million liters from 2002 to 2006 and a reduction in percentage of children consuming sugar-sweetened beverages between 1995 and 2007. The findings confirm an “Australian Paradox”—a substantial decline in refined sugars intake over the same timeframe that obesity has increased. The implication is that efforts to reduce sugar intake may reduce consumption but may not reduce the prevalence of obesity.
Keywords: sugars; sucrose; obesity; epidemiology; Australia sugars; sucrose; obesity; epidemiology; Australia

The prevalence of overweight/obesity continues to rise around the globe, in both developed and developing nations. The World Health Organization estimates that there are currently more than 700 million overweight adults, and at least 300 million obese adults [1]. The health consequences of overweight/obesity are well documented, and include increased risk of cardiovascular disease, cancer (endometrial, breast, and colon), type 2 diabetes, respiratory problems and osteoarthritis [2]. The economic costs of overweight/obesity are as equally grave as the health consequences, but not as well described. However, in several developed countries, obesity has been estimated to account for 2-7% of the total health care costs [3].
The most recent population health surveys in Australia determined that in 2007-2008, 62% of Australia’s 15 million adults [4] and 23% of Australia’s 5 million children [5] were either overweight or obese. The direct financial cost of obesity was estimated to be AUD$8.283 billion in Australia in 2008. In addition to this, the cost of lost wellbeing due to obesity was valued at AUD$49.9 billion, bringing the total cost of obesity in Australia in 2008 to AUD$58.2 billion [6].
While the cause of this pandemic of overweight/obesity is complex, multi-factorial, and likely to vary from region-to-region, researchers continue to look for common environmental factors to help explain the phenomenon. Increasing consumption of sugars [7], and in particular sugar-sweetened beverages [8], has been identified as a plausible etiological factor in the United States. Little is known about the relationship between sugars consumption and obesity in other nations, however.
The aim of this study was to examine in detail trends in obesity in Australia, and to analyze concurrent trends in sugars and sugar-sweetened beverage consumption, and to compare these to those in the United Kingdom (UK) and the United States of America (USA).

A systematic literature review was undertaken to obtain sources of Australian sugar intake data. Key words used in the search included: sugars, sucrose, dietary carbohydrate, consumption, intake, sugar-sweetened beverages, sweeteners, refined sugar, obesity, adiposity, body weight, body mass index (BMI) with Australia. The term “blood glucose” was excluded in the search strategy. The databases searched were MEDLINE, Cinahl, Embase and the Cochrane library. Full papers were retrieved if they included a healthy population as the sub-group and were relevant in the Australian context and published within the last 30 years (since 1980).
In addition to the peer-reviewed literature, publications and data issued by government, academia and industry were also explored. The websites of the World Health Organization (WHO) [9], Food and Agriculture Organization (FAO) of the United Nations [9], Australian Bureau of Statistics [10], Australian Food and Grocery Council [11], Australian Retailers Association [12], Commonwealth Scientific and Industrial Research Organization (CSIRO) [13] and the Australian Government [14] were searched for relevant information. The Australian food industry including the Australian Beverage Council (Ltd.) [15], CSR (Ltd.) [16], Coles [17] and Woolworths [18] supermarkets were also contacted for relevant data.
For this analysis, water based beverages were categorized as nutritively sweetened or non-nutritively sweetened. Nutritively sweetened beverages included all sugar-sweetened (cane or fruit sugar) beverages such as soft drinks, sports drinks, iced tea drinks and flavored waters, but Non-nutritively sweetened beverages were defined as plain still/mineral waters or beverages sweetened with non-nutritive sweeteners.

Obesity statistics describing the percentage of obesity in the study population using BMI ≥ 30 kg/m2 in adults and a BMI greater than or equal to the 95th percentile, using age and sex dependent reference values in children, were obtained.
Annual trends in obesity prevalence were obtained for Australia, the UK and the USA from a variety of sources. In Australia, data were sourced from the Australian Institute of Health and Welfare Risk Factor Data [18] store which was based on an analysis of the 1980, 1983 and 1989 Risk Factor Prevalence Surveys [19]; the 1995 National Nutrition Survey [20]; the 1999-2000 Australian Diabetes, Obesity and Lifestyle study [21]; the Australian Bureau of Statistics National Health Survey’s of 2004-2005 [22] and 2007-2008 [4] and the 2007 Australian National Children’s Nutrition and Physical Activity Survey [5]. In the UK, data were obtained from the Health Survey for England 2007 Latest Trends [23] and for the USA, from the National Health and Nutrition Examination Survey data (NHANES) [24].

Data on annual apparent consumption of sugar were obtained for Australia, the UK and the USA from the FAO [25]. Average population sugar, sugary foods and beverages intake estimates were obtained from the 2007 Australian National Children’s Nutrition and Physical Activity Survey [5,26] and food and nutrient intakes from the 1983, 1985 and 1995 National Nutrition Surveys [19]. Australian Bureau of Statistics population estimates [27] were used to obtain data for total per capita beverage sales.
Dr. Gina Levy [28] provided supplementary water-based beverage volume sales data for the years 2005 and 2006. The Australian Beverage Council Ltd. [15] representing major water-based beverage companies such as Coca-Cola Amatil Australia, Pepsico Australia, Cadbury Schweppes Australia and Unilever Australasia, provided volume sales data for the 10 year period from 1994 to 2004. This sales data was formerly from AC Nielsen Scan Track Data [29]. 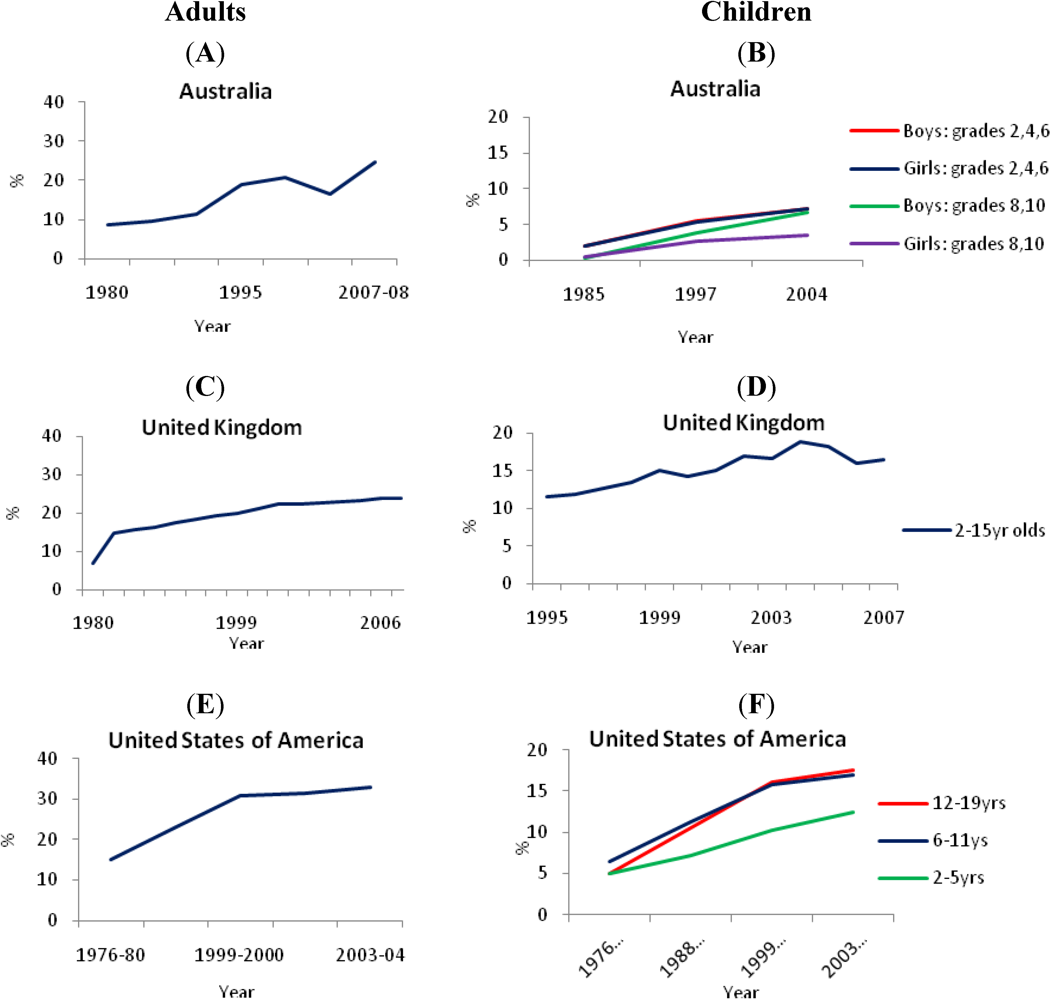 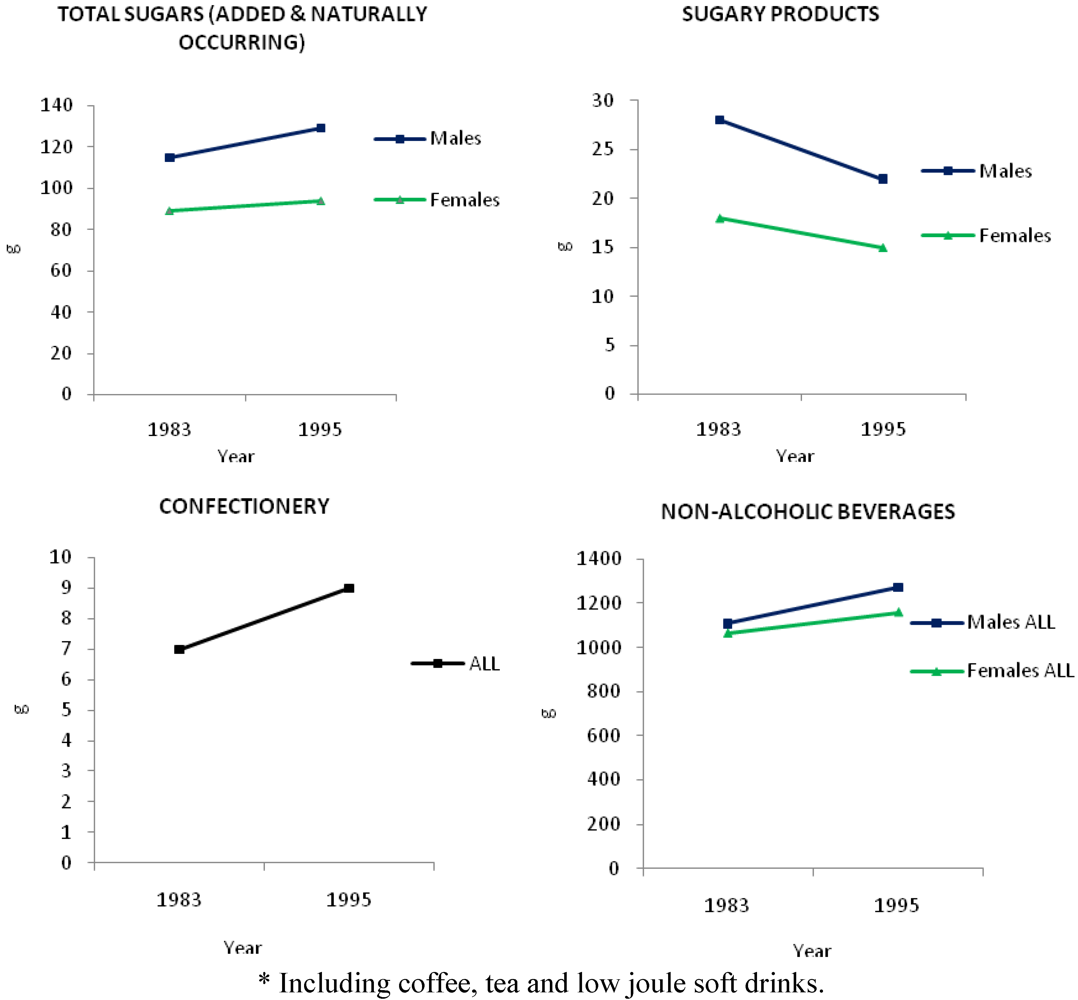 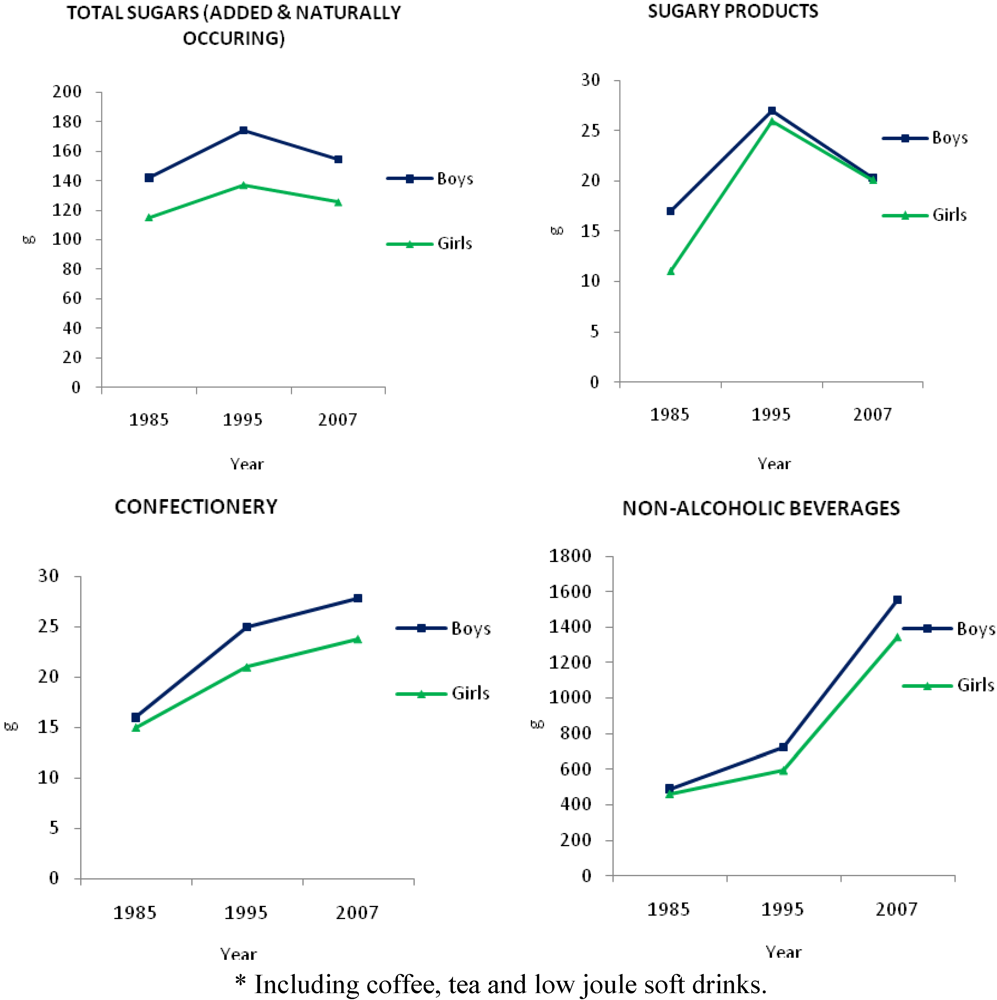 Similarly, median intake (in grams) of soft drinks, flavored waters and electrolyte drinks decreased across all age groups apart from the 8-11 year group which remained static at 391 g/day.
Fruit juice consumption is also of interest because, like soft drinks, they represent sugars in an acidic solution. The percentage of energy supplied by fruit juice was small (of the order of 1-3% depending on age group) and changes between 1995 and 2007 were small.

The present analysis indicates the existence of an Australian Paradox, i.e., an inverse relationship between secular trends in the prevalence of obesity prevalence (increasing by ~300%) and the consumption of refined sugar over the same time frame (declining by ~20%). The findings challenge the implicit assumption that taxes and other measures to reduce intake of soft drinks will be an effective strategy in global efforts to reduce obesity.