Changes in Intakes of Total and Added Sugar and their Contribution to Energy Intake in the U.S.

Effect of the Glycemic Index of Carbohydrates on Acne vulgaris

Acne vulgaris (acne) is a prevalent skin disorder with substantial physical and psychological morbidity. Although dietary factors have long been considered unimportant, insulin resistance (IR) and dietary carbohydrates have recently been implicated in the etiology of acne [1,2]. The glycemic index (GI) of meals has been directly correlated to insulin response [3] and low GI diets have been shown to decrease IR [4]. High insulin concentrations in the fasting and/or postprandial state may exacerbate acne by increasing the proliferation of basal keratinocytes. Insulin also stimulates the synthesis of androgens leading to high sebum production, a recognized correlate of acne severity [5]. IR could also increase inflammatory responses within and adjacent to the comedo [6].
Postprandial insulin responses may be of particular relevance during puberty and adolescence when whole-body IR naturally increases [7]. Insulin sensitivity and sex-hormone-binding globulin (SHBG) are directly correlated, such that falls in insulin sensitivity increase the free androgen index (FAI) [8,9]. Similarly, compensatory hyperinsulinemia is associated with reductions in insulin-like growth factor binding protein-1 (IGFBP-1), corresponding to higher cellular concentrations of free insulin-like growth factor-1 (IGF-1) [9]. Indeed, the highest incidence of acne occurs when IGF-1 levels peak [10] and adult women with acne have high levels of IGF-1 [11]. Interventions that reduce fasting and postprandial insulinemia and IGF-1 concentrations would therefore be expected to decrease sebum production and keratinocyte proliferation [12].
In the first study of its kind, Smith et al. demonstrated that reductions in carbohydrate intake with particular emphasis on low glycemic index (GI) carbohydrate foods, improved cutaneous and hormonal markers of acne severity in young adult males [2]. Several confounders, however, complicated the interpretation of the study because the treatment group lost more weight, and had higher protein and fiber intake than the control group—factors which the authors discussed. Since weight loss as well as higher protein and fiber intake have all been linked to improved insulin sensitivity, it is not clear whether dietary GI played an important role in the improvement of acne.
In the present study, we hypothesized that in the context of weight maintenance and identical macronutrient and fiber intake, the replacement of high GI carbohydrates with low GI carbohydrates would improve acne severity by lowering postprandial insulin concentrations and/or decreasing IR. We studied adolescent males attending boarding school so that food intakes could be more easily controlled.

Healthy adolescent males with acne were recruited at three secondary boarding schools in Sydney, Australia, between 2006 and 2007. Inclusion criteria were acne severity grade 1, 2 or 3, stable weight over the past three months and parental/guardian consent. Exclusion criteria were previous use of isotretinoin, antibiotics in the past month, excessive alcohol intake, illicit drug use, smoking, physical or mental illness, food allergy or intolerance, vegetarianism, previous surgery on the gastrointestinal system, black skin (due to difficulty in visualizing lesions), or final school examinations in the coming months. This study was conducted according to the guidelines laid down in the Declaration of Helsinki and all procedures involving human subjects were approved by the Sydney University Human Research Ethics Committee. Written informed consent was obtained from all subjects and their parents/guardians. The trial is registered with the Australian New Zealand Clinical Trials Registry (ANZCTR) ACTRN12610000261011 and Unique Trial Number (UTN) U1111-1114-5335.

The study was of parallel design and volunteers were assigned alternately to the high or low GI diet in order of recruitment. They were informed that the study was designed to determine the effect of the GI of carbohydrates on acne. Subjects were instructed to maintain their current washing regime. At baseline, height and weight were measured in light clothing and without shoes. Weight was recorded weekly and food diaries were completed on Saturday and Sunday of every week. Dietary records were analyzed using Food Works software package 3.02 (Xyris Software, Highgate Hill, Australia), based on the Australian food composition tables. Average weighted GIs were calculated from the diaries using the GI values of individual food components [13] and their relative contribution to total carbohydrate in the meal. At baseline and at eight weeks, severity of facial acne was assessed by a dermatologist. Blood (6 mL) was obtained via a cannula inserted into the antecubital vein of the lower arm and transferred into EDTA-coated Vacutainer tubes before being stored at −20 °C.

In one-to-one weekly counseling sessions, subjects were given detailed instruction on how to follow an ad libitum high or a low GI diet, with written material to supplement these sessions. Diet advice differed only in the type of carbohydrate to be eaten at meals provided in the school dining hall/at home. School menus were assessed to ensure high and low GI options were available at every meal, and instructions were sent to parents if boarders returned home at weekends. Snack foods were provided in hampers on a weekly basis. Low GI foods included verified low GI brands of muesli, a sports drink and a processed fruit snack, and lasagne [13]. High GI foods included verified high GI brands of wheat breakfast biscuits, a sports drink and a processed fruit snack, and baked potato with chili con carne [13].

A dermatologist (SL or JC) who was blind to diet allocation assessed facial acne severity by examining the number and degree of inflammation of inflammatory lesions (papules, pustules and nodules, not comedones or scars) on the face under ceiling fluorescent lighting or daylight. Acne was graded on a scale from 0 to 3 (0: no acne, 1: mild, 2: moderate and 3: severe). Photographs were taken of the forehead and right and left cheeks. When illness precluded the attendance of the first dermatologist (SL), a second dermatologist (JC) completed some of the final assessments. The first dermatologist later graded photographs from these assessments and an average was taken from the two grades of facial acne severity.

Power calculations based on previous studies [17] showed at least 15 subjects per dietary intervention would provide >90% power to detect an effect size of ~50% in acne severity between the low and the high GI diets (p < 0.05). In the final analysis, a general linear model for change in acne severity was used, in which dermatologist and diet were fixed factors and baseline values were treated as a covariate (this allowed for the change in dermatologist as well as the change in the method of facial acne assessment, i.e., photo vs. in-person). Changes over time within diets were compared using paired Student’s t-tests. Differences between the degree of change on each diet were compared using independent samples Student’s t-tests. Pearson’s correlations between acne severity and biochemical parameters were obtained. Statistical calculations were carried out using SPSS 14 for Windows (SPSS Inc., Chicago, IL). Results are expressed as mean ± SEM unless otherwise stated. Differences are considered significant if p < 0.05 and highly significant if p < 0.01.

Table 2. Daily nutrient intakes calculated from the food diaries that were filled out every weekend during the intervention period for eight weeks.
E: energy; a: 3 subjects from the low GI diet lost their food diaries; b: 3 subjects from the high GI diet lost their food diaries.
Facial acne improved on both diets (low GI −26 ± 6%, p = 0.0004 and high GI −16 ± 7%, p = 0.01), but differences between diets did not reach significance (Figure 1, Table 3). Similarly, there were no significant differences within or between diets for most biochemical parameters. However, IGFBP-1 declined significantly on the low GI diet versus the high GI diet (low GI −6.2 ± 3.7 ng/mL vs. high GI 5.0 ± 2.6 ng/mL, p = 0.02) (Table 4). Testosterone increased significantly from 0 to 8 wk on the high GI diet and increased non-significantly on the low GI diet, but there was no effect of diet composition (low GI 3.4 ± 1.8 nmol/L vs. high GI 5.0 ± 1.7 nmol/L, p = 0.50).
Change in acne severity was not correlated with change in HOMA-IR or change in insulin (Pearson correlation r = −0.196, p = 0.244 and Pearson correlation r = −0.202, p = 0.225, respectively).
In the present study we found no effect of GI on facial acne severity over 8 wk and no correlation between changes in acne severity and insulin concentrations or sensitivity. However, our hypothesis that a low GI diet would improve facial acne to a greater extent than a high GI diet was consistent with the finding that acne severity decreased more on the low GI diet (~26%, p = 0.0004) compared with the high GI diet (~16%, p = 0.01). Because the trial duration was dictated by the school term, our study was shorter than the ideal and usual intervention period of 12 wk in acne treatment studies [2,17]. 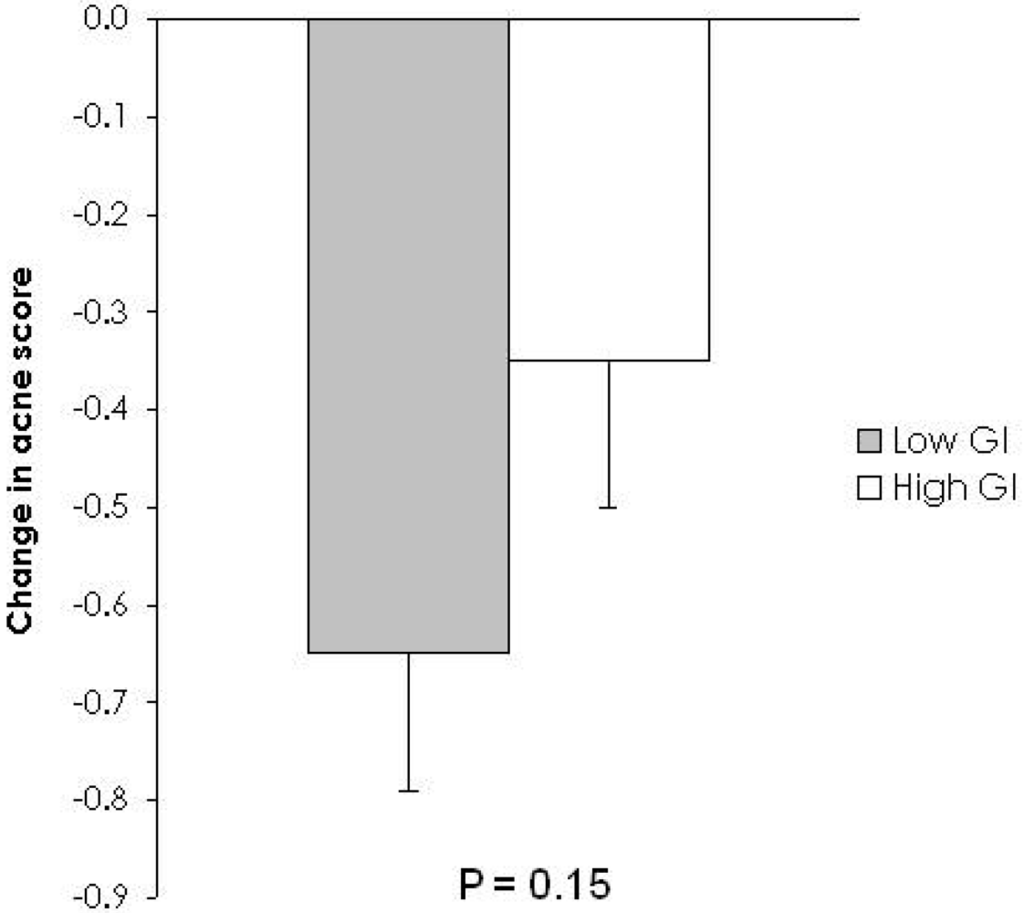 This study suggests that a low GI diet does not significantly improve facial acne more than a macronutrient-matched high GI diet, although there was a trend for the low GI diet to improve acne to a greater extent than the high GI diet. However, the limitations of the study limit the conclusions that can be made from the results. The lack of a difference between diets may be due to short study duration and a relatively blunt acne severity assessment tool. It is possible that the observations of the previous study investigating dietary GI/GL may be explained by weight loss or differences in protein and/or fiber content. Future studies should employ randomized designs of at least 12 wk duration, subjects within a narrow age range, and using validated acne scoring systems [17]. Tight control of confounding factors, including weight, type and amount of fat, protein and carbohydrate, level of stress, and other limitations discussed above, is necessary.

JBM, RR, PP and FA conceived the study, analyzed and interpreted the findings and prepared the manuscript. RR, SL, KS and JC carried out the protocol. RR, PP and JBM had full access to all the data and take responsibility for the integrity and accuracy of the findings.
We thank Stephen Lee AM and Choi for their dermatological expertise, dedication and time and the staff in the kitchens, health centers and students and staff at the boarding houses of Cranbrook school and St Joseph’s and St Ignatius’ Colleges in Sydney.

© 2010 by the authors; licensee MDPI, Basel, Switzerland This article is an open-access article distributed under the terms and conditions of the Creative Commons Attribution license (http://creativecommons.org/licenses/by/3.0/).