As “healthy” sugar substitutes with low-calorie content, non-nutritive sweeteners (NNSs) are used among all populations worldwide, including pregnant women. Cohort studies in Europe found that over 30% of pregnant women consumed artificially sweetened beverages during gestation [1]. Generally, NNS effects on human metabolism are thought to be non-harmful or even beneficial. More safety concerns arise from recent evidence showing the relationship between NNS exposure and dysmetabolism, particularly in pregnant women [2].
Current animal and human studies draw controversial conclusions about the effects of NNS exposure on metabolic disorders. In several animal studies, aspartame exposure resulted in body weight gain, obesity, glucose tolerance, and impaired insulin sensitivity [3,4,5]. However, a single dose of sucralose in the presence of carbohydrates could lower blood glucose in healthy subjects [6]. One of the proposed explanations for these conflicting results is the different sites of action on the sweet taste receptors (STRs) of each sweetener [7]. Therefore, to more precisely understand the effects of each NNS on metabolism, specific research on each sweetener is needed.
Previous human studies have commonly used questionnaires with NNS-containing foods to assess the amount of NNSs intake. Indeed, industrial food is not the only source of NNS exposure. A widespread and stable presence of NNS has been found in multiple personal care products, and surprisingly, in drinking water systems [8]. Emerging research reports that NNS are available in the fluids and organs of animals and human bodies [9,10,11]. Hence, measuring circulating NNS could be an alternative way to evaluate the association between NNS and metabolism. To our knowledge, literature regarding the associations between circulating NNS and metabolism was scarce.
The effects of NNSs during pregnancy on maternal metabolism have not been extensively studied. It has been reported that pregnant women with daily NNS beverage consumption gained more weight [1]. An animal study demonstrated that rats receiving aspartame exhibited more food intake during pregnancy [12].
Sucralose and aspartame are more widely used sweeteners, not only in diet soft drinks but also in water bodies [13]. Hence, the present study aimed to detect circulating aspartame and sucralose in women during pregnancy and evaluate the associations between serum aspartame and sucralose levels with glucose and lipid metabolism.

We conducted a nested case-control study of pregnant women from Chongming Hospital, affiliated to Shanghai University of Health and Medicine Sciences, from September 2019 to May 2021. With a confidence interval (CI) of 95%, power of 80%, and a prevalence of gestational diabetes (GDM) of 20% [14,15], we calculated a sample size of 385 participants using PASS 14 Power Analysis and Sample Size Software (NCSS, LLC. Kaysville, Utah). A completely random sampling with an effect size of 2 required 670 participants. Finally, 632 pregnant women were enrolled in the study at their first routine ultrasound examination (at 9–14 weeks of gestation). Specific exclusion criteria were presented as follows: (1) uncertain date of last menstrual period; (2) multiple pregnancies; (3) previous diagnosis of diabetes requiring treatment with medication before pregnancy; (4) secondary diabetes; (5) induction of pregnancy with the assistance of advanced reproductive technology.
In total, 113 of 632 participants were diagnosed with GDM. To maximize the statistical power, all women with GDM were selected as cases, except for 4 women missing blood samples. The final analysis included 109 cases and 109 controls matched for age and self-reported pre-pregnancy BMI. Group sample sizes of 109 cases and 109 controls achieved 100% power to show no difference in serum aspartame levels between the GDM and non-GDM groups using PASS 14 (Supplementary Figure S1). This study was approved by the institutional review board of Chongming Hospital Affiliated to Shanghai University of Health and Medicine Sciences (project number CMEC-2021-KT-30). Each participant signed a consent form.

Enrolled women underwent four visits during the perinatal period. Three face-to-face interviews were undertaken at 9–14, 24–32, and 34–36 weeks. The fourth visit was a phone interview completed one month before the due date.
Information on name, age, pre-pregnancy weight, gravidity and parity times, family history of diabetes, and history of chronic diseases was obtained during the first visit at 9–14 weeks gestation. Then, a comprehensive examination including a detailed questionnaire, anthropometric measurements, and biochemical evaluation was administered at 24–32 weeks gestation but as close to 28 weeks as possible. A 75-g oral glucose tolerance test (OGTT) was performed on the morning after at least 3 days of usual lifestyle and fasting for 8–10 hrs. Anthropometric measurements, including height, body weight, and blood pressure, were measured in the second trimester before OGTT. We calculated BMI as the weight divided by the squared height (kg/m2). We calculated maternal mean arterial pressure (MAP) as 1/3(SBP) + 2/3(DBP) [16]. Simple anthropometric measurements were administered between 34 and 36 weeks. Multiple attempts were made to contact eligible participants one month before the due date. Maternal and child outcomes were collected through a phone view.

Serum sweetener quantitation was performed using ultraperformance liquid chromatography coupled to a tandem mass spectrometry (UPLC-MS/MS) system (ACQUITY UPLC Xevo TQ-S, Waters Corp., Milford, MA, USA) according to previously published methods [20,21]. All chromatographic separations were performed with an UPLC HSS T3 (100 × 2.1 mm, 1.7 μm). The mobile phases consisted of 0.1% formic acid in water (A) and acetonitrile/methanol (7:3 + 0.1%FA, B) with a total flow rate of 0.4 mL/min. The gradient elution program was set as follows: 0–1 min (5% B), 1–1.8 min (5–20% B), 1.8–6 min (20–60% B), 6–7 min (60–100% B), 7–8 min (100% B), and 8–9 min (100–5% B). The cone and collision energy for each sweetener used the optimized settings.
For the mass spectrometer, the multiple reaction monitoring mode was used, with the electrospray ionization source in positive mode and negative mode. The capillary voltage was set at 2.0 kV in positive mode and 1.5 kV in negative mode. The desolvation temperature was set at 500 °C with a desolvation gas flow of 1000 L/Hr.
Quality control pools were constructed using equal volumes from all maternal samples and prepared for analysis as described above. QCs from each MS batch were first injected. The raw data files generated through UPLC-MS/MS were processed using the MassLynx software for peak integration, calibration, and quantification of each metabolite. A calibration curve was used to determine sweetener concentration. The testing service was provided by Metabo-Profile Inc., Shanghai, China.

3.4. Linear Associations between Serum Aspartame and Sucralose Levels and Glycemic and Lipid Traits

To conclude, maternal serum aspartame levels were significantly associated with impaired glucose and lipids metabolism during pregnancy at OGTT, while serum sucralose levels were negatively associated with HbA1c. More robust prospective studies are warranted to confirm the cross-sectional associations observed in this study.

The study was conducted in accordance with the Declaration of Helsinki, and approved by the Institutional Review Board Chongming Hospital Affiliated to Shanghai University of Health and Medicine Sciences (project number CMEC-2021-KT-30).

Data and codes used for analyses will be made available by the authors upon request. 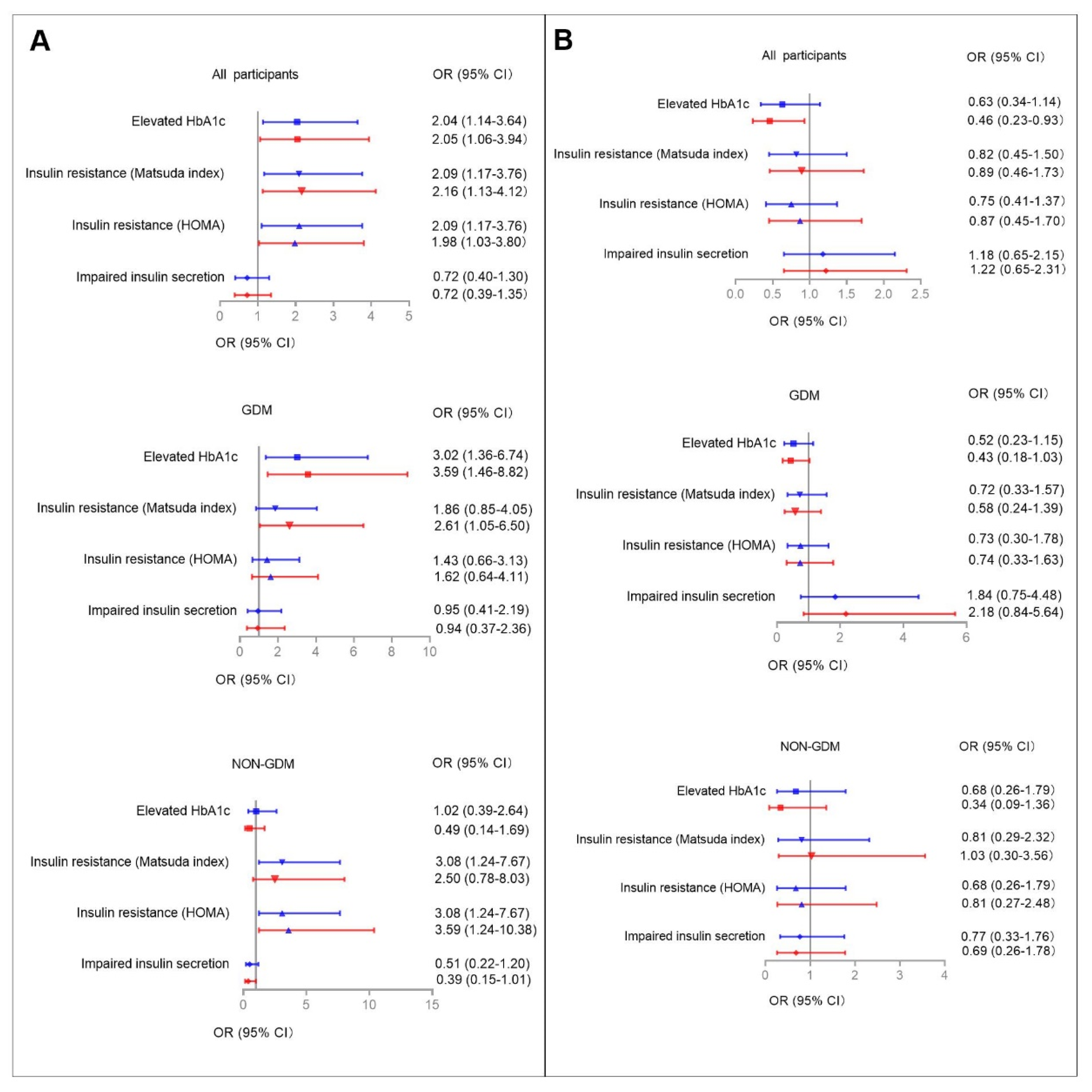