:
We recently reported that the inclusion of whole eggs in plant-based diets (PBD) increased plasma choline, lutein, and zeaxanthin in individuals with metabolic syndrome (MetS). The objective of the current study was to evaluate whether this dietary pattern would protect against oxidative stress and low-grade inflammation, two common characteristics of MetS. We recruited 24 men and women with MetS, who, after following a PBD for 2 weeks (baseline), were randomly allocated to consume either two whole eggs with 70 g of spinach/day (EGG) or the equivalent amount of egg substitute with spinach (SUB) as breakfast for 4 weeks. After a 3-week washout, they were allocated to the alternate breakfast. We measured biomarkers of oxidation and inflammation at baseline and at the end of each intervention. Tumor necrosis factor-alpha, interleukin-6, monocyte protein attractant-1, liver enzymes, and C-reactive protein, as well as total antioxidant capacity, paraoxonase-1 (PON-1) activity, and other biomarkers of oxidation were not different at the end of EGG or SUB or when compared to baseline. However, plasma malondialdehyde (MDA) concentrations were lower (p < 0.05) during the EGG and baseline compared to SUB. In addition, the increases in dietary lutein and zeaxanthin previously observed had a strong positive correlation with PON-1 activity (r = 0.522, p < 0.01) only during the EGG period, whereas plasma zeaxanthin was negatively correlated with MDA (r = −0.437, p < 0.01). The number of participants with MetS was reduced from 24 during screening to 21, 13, and 17 during the BL, EGG, and SUB periods, respectively, indicating that eggs were more effective in reversing the characteristics of MetS. These data suggest that adding eggs to a PBD does not detrimentally affect inflammation or oxidative stress; on the contrary, eggs seem to provide additional protection against the biomarkers that define MetS.
Keywords:
metabolic syndrome; eggs; plant-based diet; spinach; inflammation; oxidative stress

Chronic low-grade inflammation and oxidative stress that often accompany metabolic syndrome (MetS) are significant factors causing the metabolic condition and associated pathophysiological consequences [1]. MetS, characterized by insulin resistance, hypertension, abdominal obesity, and dyslipidemia, triggers the alteration of cell signaling pathways, resulting in increased levels of inflammatory markers, lipid peroxides, and free radicals, causing cell damage and eventually leading to the clinical symptoms of the condition. Elevated products of oxidative stress as well as inflammatory markers, C-reactive protein (CRP) [2], tumor necrosis factor-alpha (TNF-α), and interleukin-6 (IL-6) [3] have been documented to contribute to the pathogenesis of MetS [4].
The dietary intake of antioxidant-rich foods can reduce the adverse effects of oxidative stress [5]. Plant-based diets (PBDs), through their antioxidant and anti-inflammatory properties, may reduce the development and progression of MetS [6]. There is convincing evidence that PBDs modulate immunological and inflammatory processes [7,8]. The effect may vary depending on the definition of vegetarianism and the individual nutrient components included in each [9]. Still, when compared to an omnivorous diet, vegetarian diets typically include a higher content of phytochemicals, antioxidant micronutrients such as vitamins C and E, fiber, and reduced saturated fats, which may contribute to a protective effect [10]. These beneficial dietary components and their metabolites help stabilize the gut microbiome, thus providing anti-inflammatory effects [11]. The vegetarian and vegan diets are associated with improved insulin sensitivity, reduced oxidative stress, and decreased concentrations of CRP [6,12].
Another natural source of antioxidants is whole eggs. In addition to their exceptional nutritional quality, eggs are rich in antioxidants such as vitamins A and E, selenium, lutein, and zeaxanthin [13]. The lipophilic antioxidants present in the egg yolk are highly bioavailable due to lipid content in the yolk. Eggs may provide natural sources of omega-3 fatty acids, vitamin B12, vitamin D, and bioavailable iron that are potentially deficient nutrients in a vegetarian diet. The anti-inflammatory effects of eggs observed previously in a carbohydrate-restricted diet [14] and after consumption of three eggs/d [15] suggest that eggs may complement the antioxidant effects of a PBD in treating MetS.
We have previously demonstrated the complementary effect of two whole eggs for 4 weeks to this protective diet, which reduced BMI and weight with corresponding increases in plasma HDL cholesterol (HDL-C), large HDL particles, and plasma choline, lutein, and zeaxanthin [16]. We reported the improvements in the dietary concentration of these nutrients and HDL-C after whole egg intake compared to egg substitutes in adults with MetS. In this study, as an extension of these findings, we investigated whether egg intake influenced oxidative stress and inflammation in these subjects. We hypothesized that whole egg consumption would not exacerbate the risk factors associated with MetS, but rather complement the PBD through its antioxidant properties as compared to egg substitutes.

This randomized, controlled, cross-over designed dietary intervention was previously reported [16]. After screening to meet the criteria for MetS, participants were asked to follow a PBD (lactovegetarian) throughout the 13-week intervention. Participants were allowed to consume dairy, vegetables, fruits, and grains while restricting the consumption of meat, poultry, fish, and eggs other than those provided during the treatments. In addition, after a 2-week washout (without eggs and spinach), participants were randomly allocated to consume either two whole eggs per day (EGG) or the equivalent amount (1/2 c) of egg substitute with spinach (70 g) as an omelet for breakfast every day for 4 weeks. The egg substitute was egg whites from the Egg Beaters brand with zero cholesterol as described previously [16]. Following a 3-week washout, participants were assigned to the opposite treatment.
A registered dietitian advised the participants and ensured compliance with the diet. The intervention scheme was reported earlier [16]. Thirty participants (49.3 ± 8 y) classified with MetS according to National Cholesterol Education Program–Adult Treatment Panel III (NCEP-ATP III) guidelines [17] enrolled in the 13-week diet intervention. At the screening, each participant signed the written informed consent form. With 6 dropouts, 24 participants completed the intervention. This study was registered at Clinicaltrials.gov (protocol NCT04234334) and was approved by the University of Connecticut, Storrs Institutional Review Board under protocol H19-178.

Blood was drawn from MetS participants at baseline (BL) (week 2) and the end of each treatment (week 6 and week 13). After a 12 h overnight fast, blood samples were collected into EDTA coated vacutainers and were immediately centrifuged at 2000× g for 20 min at 4 °C for the separation of plasma. Blood collected in vacutainers without anticoagulant was left to clot at room temperature for 20 min before centrifuging to separate serum. Serum and plasma aliquots were stored at −80 °C until further analysis.

We evaluated the parameters of the metabolic syndrome (waist circumference, blood pressure, plasma triglycerides, HDL-C, and fasting glucose) as previously reported [16]. We compared these values to those during screening to determine how many individuals resolved their MetS across the intervention during BL, EGG, and SUB periods.

Data are shown in Table 2. MDA concentrations were significantly decreased at BL and after EGG intake compared to SUB. There were no differences in the concentration of 8-isoprostanes, GlycA, and oxLDL between diets. We also found a negative correlation between MDA concentration and plasma zeaxanthin, as depicted in Figure 3. Plasma zeaxanthin values were previously reported [16], and they were significantly increased after EGG treatment (93.5 ± 50.8 nmol/L) compared to SUB (73.1 ± 38 nmol/L) and BL (68.6 ± 34.6 nmol/L).
Plasma TAC was also maintained throughout the intervention (BL: 183.98 ± 36.11 mg VCE/L, EGG: 185.87 ± 40.44 mg VCE/L, SUB: 172.25 ± 35.44 mg VCE/L), as shown in Figure 4a. We also found a negative correlation between oxLDL and TAC only during the EGG period, as shown in Figure 4b.

The effects of a PBD at baseline and during EGG and SUB periods in resolving the characteristics of the MetS is shown in Figure 5.
Of the 24 adults with MetS criteria enrolled in this study, 4 participants were no longer classified as having MetS after following a PBD for 2 weeks (BL) and 7 after SUB intake. However, EGG intake reversed the metabolic syndrome in 11 participants. Among subjects in the EGG group, seven participants were allocated to the EGG group first and four to the SUB group first. The individual components modified during each treatment were variable among participants.

These results demonstrate that the inclusion of eggs in a PBD may provide beneficial effects in attenuating the symptoms of MetS by reducing the oxidative stress marker MDA compared to egg substitutes. Even with the cholesterol-rich egg yolk, two whole eggs did not increase inflammation in this at-risk population when consumed daily for 4 weeks, but reversed MetS criteria in a higher number of participants compared to baseline or the use of egg substitutes.

M.S.T. recruited the participants, performed analysis, and wrote the first draft of this paper; L.H., J.R.S. and C.G. contributed to the analysis and critique of the paper; C.N.B. and O.K.C. provided technical support and evaluated the manuscript, M.L.F. designed the study, monitored the intervention, and was responsible for the final draft of the manuscript. All authors have read and agreed to the published version of the manuscript.

This study was funded by the Egg Nutrition Center, Chicago, IL, USA.

The study was approved by the University of Connecticut Institutional Review Board. This study was registered at Clinicaltrials.gov (protocol NCT04234334).

All subjects provided informed consent to participate in the study.

Data for this study are available upon request from the principal investigator. 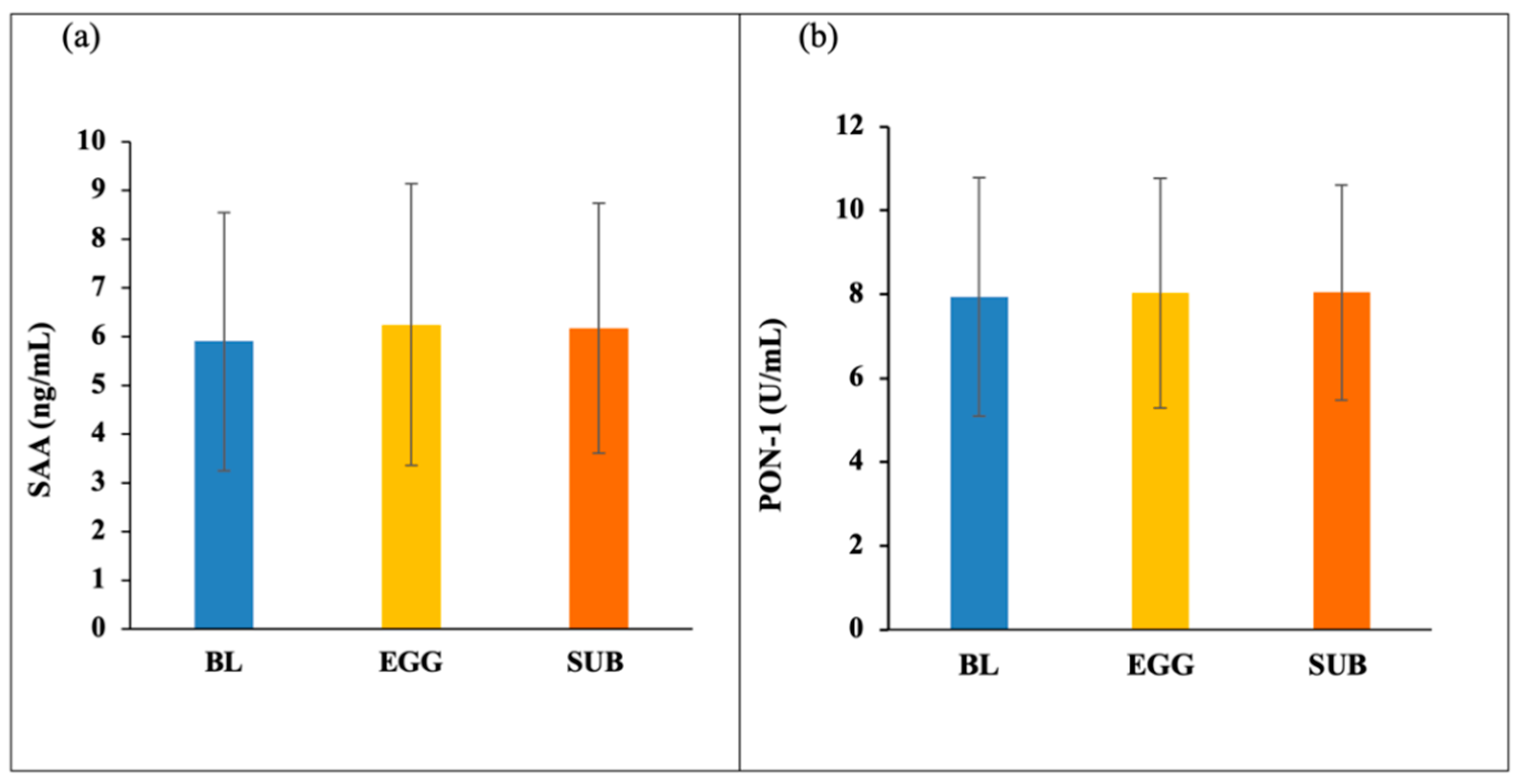 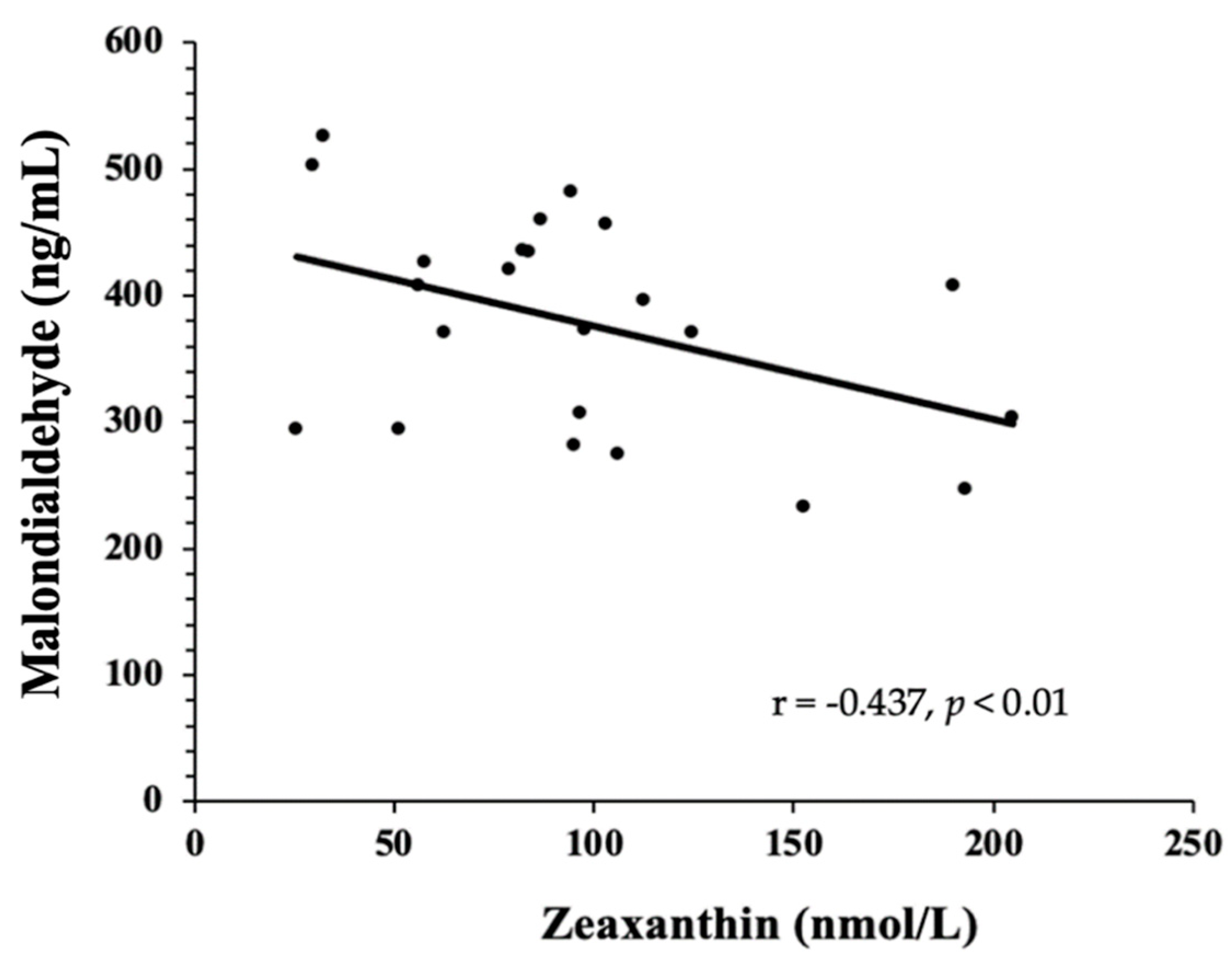