The Role of Dietary Intake in Type 2 Diabetes Mellitus: Importance of Macro and Micronutrients in Glucose Homeostasis

This study aimed to observe if quinoa could produce a benefit on postprandial glycemia that would result in less progression to type 2 diabetes (T2D). A cross-over design pilot clinical study with a nutritional intervention for 8 weeks was performed: 4 weeks on a regular diet (RD) and 4 weeks on a quinoa diet (QD). Nine subjects aged ≥65 years with prediabetes were monitored during the first 4 weeks of RD with daily dietary records and FreeStyle Libre®. Subsequently, participants started the QD, where quinoa and 100% quinoa-based products replaced foods rich in complex carbohydrates that they had consumed in the first 4 weeks of RD. The glycemic measurements recorded by the sensors were considered as functions of time, and the effects of nutrients consumed at the intended time period were analyzed by means of a function-on-scalar regression (fosr) model. With QD participants, decreased body weight (−1.6 kg, p = 0.008), BMI (−0.6 kg/m2p = 0.004) and waist circumference (−1.5 cm, p = 0.015) were observed. Nutrients intake changed during QD, namely, decreased carbohydrates (p = 0.004) and increased lipids (p = 0.004) and some amino acids (p < 0.05). The fosr model showed a reduction in postprandial glycemia in QD despite intrapersonal differences thanks to the joint action of different nutrients and the suppression of others consumed on a regular diet. We conclude that in an old age and high T2D-risk population, a diet rich in quinoa reduces postprandial glycemia and could be a promising T2D-preventive strategy. View Full-Text
Keywords: nutrition; diabetes; quinoa; diet; prevention; glycaemia nutrition; diabetes; quinoa; diet; prevention; glycaemia
►▼ Show Figures 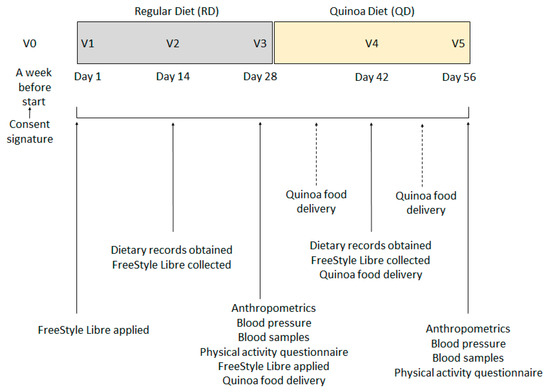