Obesity is a major health problem that is caused by body fat accumulation and that can lead to metabolic diseases. Owing to several side effects of the currently used antiobesity drugs, natural plants have risen as safe and potential candidates to alleviate obesity. We have previously reported the antiobesity effect of Hydrangea serrata (Thunb.) Ser. leaves extract (WHS) and its underlying mechanisms. As an extension of our preclinical studies, this study aimed to investigate the effect of WHS on body weight and body fat reduction in overweight or obese humans. A total of 93 healthy overweight or obese males and females, aged 19–65 years, with body mass indexes (BMIs) ≥ 25 and <32 kg/m2, were recruited and received either an oral administration of 600 mg of WHS, or placebo tablets for 12 weeks. Daily supplementation with WHS decreased body weights, body fat masses, and BMIs compared with the placebo-treated group. The hip circumferences, visceral fat areas, abdominal fat areas, and visceral-to-subcutaneous ratios decreased after WHS supplementation. No significant side effects were observed during or after the 12 weeks of WHS intake. In conclusion, WHS, which has beneficial effects on body weight and body fat reduction, could be a promising antiobesity supplement that does not produce any side effects. View Full-Text
Keywords: Hydrangea serrata (Thunb.) Ser.; obesity; body weight; body fat; clinical trial Hydrangea serrata (Thunb.) Ser.; obesity; body weight; body fat; clinical trial
►▼ Show Figures 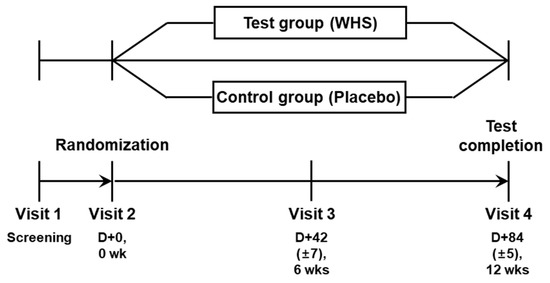