Zinc and the Innovative Zinc-α2-Glycoprotein Adipokine Play an Important Role in Lipid Metabolism: A Critical Review
Previous Article in Journal

Background: Obesity is a state of excess energy storage resulting in body fat accumulation, and postmenopausal obesity is a rising issue. In this study using ovariectomized (OVX) rats, we mimicked low estrogen levels in a postmenopausal state in order to investigate the effects of different amounts and types of dietary fatty acids on body fat accumulation and body lipid metabolism. Methods: At 9 weeks of age, rats (n = 40) were given an ovariectomy, eight of which were sham-operated to serve as a control group (S). We then divided OVX rats into four different intervention groups: diet with 5% soybean oil (C), and diet with 5% (L), 15% (M), and 20% (H) (w/w) experimental oil, containing 60% monounsaturated fatty acids (MUFAs) and with a polyunsaturated/saturated fatty acid (P/S) ratio of 5. Results: After OVX, compared to the S group, the C group showed significantly higher body weight, and insulin and leptin levels. Compared to the C group, the H group had lower hepatic triglyceride level and FAS enzyme activity, and higher hepatic ACO and CPT-1 gene expressions and enzyme activities. Conclusions: An OVX leads to severe weight gain and lipid metabolism abnormalities, while according to previous studies, high fat diet may worsen the situation. However, during our experiment, we discovered that the experimental oil mixture with 60% MUFAs and P/S = 5 may ameliorate these imbalances. View Full-Text
Keywords: ovariectomy; monounsaturated fatty acids; body fat accumulation; lipid metabolism ovariectomy; monounsaturated fatty acids; body fat accumulation; lipid metabolism
►▼ Show Figures 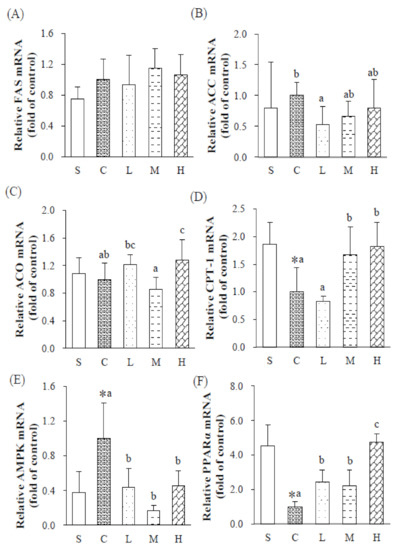