Paraprobiotics: A New Perspective for Functional Foods and Nutraceuticals
Previous Article in Journal

Heterogeneity of Associations between Total and Types of Fish Intake and the Incidence of Type 2 Diabetes: Federated Meta-Analysis of 28 Prospective Studies Including 956,122 Participants

Cardiovascular disease (CVD) is the leading cause of death worldwide [1]. The major lipid risk factor for CVD development is hypercholesterolemia [2], but accumulating evidence from recent studies shows that an increased triglyceride (TG) level is also strongly associated with cardiovascular morbidity and mortality risk [3].
Hypertriglyceridemia (HTG) occurs in approximately 27% of the population [4] and is closely linked to obesity, considered to be a pandemic of the 21st century [5]. The development of HTG can be related to genetic predisposition [6], excessive synthesis, and secretion of TG-rich lipoproteins (TRL), including chylomicron (CM) and very-low-density lipoprotein (VLDL) [7], and/or to impaired TRL clearance from plasma [8,9].
Impaired TRL clearance is the most important factor that contributes to the development of HTG, and the reduced efficiency of intravascular TG hydrolysis mediated by lipoprotein lipase (LPL) is crucial to this process [9]. The impaired clearance leads to a prolonged presence of TRL remnants in plasma that infiltrate into the subendothelial space, causing inflammation and endothelial dysfunction [10,11]. The increased number of TRL remnants has also been related to the induction of coagulation activity, the generation of highly atherogenic small dense low-density lipoprotein (sdLDL), and an impairment of high-density lipoprotein (HDL) composition and function [6].
HDL plays an important anti-atherogenic role [12], and recent studies show that the beneficial effect of HDL is linked to the functional traits of the lipoprotein rather than its quantity measured with cholesterol content [13]. Plasma TRL and HDL metabolism is closely related [12]: it has been shown that HDL protects the endothelium from the inhibitory effect of VLDL on endothelium-dependent relaxation [14]. The other important mechanism by which HDL may affect TRL metabolism and prevent HTG development and atherosclerosis as a consequence is the interaction between HDL and TRL particles. It has been previously shown that HDL acts as an acceptor of the surface material released from VLDL during LPL-mediated lipolysis, enhancing the efficiency of TG lipolysis. HDL also promotes the conversion of VLDL into IDL/LDL, and the changes in composition and properties of HDL related to metabolic disorders, such as chronic kidney disease, can impair this activity [15].
Since the metabolism of TG and cholesterol are linked due to the shared physicochemical properties of the molecules and their presence in the particles of the same lipoprotein classes, there may be a relationship between hypercholesterolemia and HTG development. For instance, it was demonstrated that subjects with familial hypercholesterolemia (FH) with normal fasting TG levels had impaired postprandial TG response to fatty meals compared to control, despite similar basal TG levels in FH and control groups [16,17]. Whether the oversecretion and/or impaired TRL catabolism and clearance can be the cause of TRL disturbances and HTG development in hypercholesterolemic subjects is not fully explained and needs to be elucidated [18].
The aim of this study was to evaluate the impact of hypercholesterolemia and hypertriglyceridemia on the efficiency of LPL-mediated VLDL lipolysis in subjects with no history of CVD to assess TG-rich lipoprotein metabolism disturbances. The magnitude of the effect of HDL on VLDL lipolysis efficiency was also assessed. We found that similarly to hypertriglyceridemic subjects, the VLDL obtained from hypercholesterolemic subjects with no increased TG serum level had reduced susceptibility to lipolysis compared to controls with normal lipid levels. HDL was able to increase lipolysis efficiency independently on lipid disturbances.

Forty adults aged 21–59 under the care of the General Practitioner (Non-public Health-Care Center, Pomerania region, Poland) were recruited into the study. Participants were asymptomatic for CVD at the time of recruitment, and a history of a previous cardiovascular event was excluded. The other detailed study exclusion criteria were: diabetes, liver disease, kidney disease, cancer, asthma, acute disease within 3 months before the study, a treatment course containing lipid-lowering drugs (statins, fibrates, ezetimibe, and PCSK9 inhibitors), hormone replacement therapy (HRT) and other drugs affecting lipid profile (immunosuppressive agents, diuretics, steroids), or heparin. All participants gave written informed consent for participation in the study. The study was approved by the Independent Bioethics Commission for Research of the Medical University of Gdansk, Poland (No. NKBBN/612/2017–2018).
Study participants were divided into three groups according to low-density lipoprotein cholesterol (LDL-C) and TG levels. Namely, LDL-C < 115 mg/dL and TG < 150 mg/dL, the normolipidemic (NL) group; LDL-C ≥ 115 mg/dL and TG < 150 mg/dL, the hypercholesterolemic (HC) group; and LDL C ≥ 115 mg/dL and TG ≥ 150 mg/dL, the hyperlipidemic (HL) group. The characteristics of the study groups are presented in Table 1. There were 12 subjects (30%) that were normolipidemic and 28 that had elevated serum lipid levels. There were 15 patients (38%) who had increased LDL-C levels (HC group) and 13 subjects (32%) who had both increased LDL-C and TG levels (HL group). There were no significant differences in BMI, gender distribution, hypertension, and smoking frequency among the groups.

The VLDL lipolysis was performed according to the procedure described earlier [15]. Briefly, VLDL was incubated with LPL isolated from bovine milk (Sigma Aldrich, St. Louis, MO, USA) for 1 h at 37 °C at a constant VLDL-TG:LPL 90:0.48 mg/dL ratio, in the absence or presence of HDL. The VLDL-cholesterol:HDL-cholesterol weight ratio was 1:1. Albumin (Sigma Aldrich, St. Louis, MO, USA) was added to the reaction mixtures as a free fatty acid acceptor (final concentration in the reaction mixture: 2% w/w). An appropriate volume of 0.01 M Tris‑HCl buffer, Ph 7.4, containing 0.195 M NaCl and 0.01% NaN3 corresponding to the volume of HDL and/or LPL was added to adjust the differences between reaction mixtures volumes. The control mixture (called “VLDL control”) was incubated with VLDL and albumin, without LPL and HDL, and with an appropriate volume of 0.01 M Tris-HCl buffer, Ph 7.4, containing 0.195 M NaCl and 0.01% NaN3. After incubation, the mixtures were cooled on ice for 10 min. The VLDL remnants were separated from other reaction products by immunoprecipitation with anti-apo B polyclonal antibodies (Dako, Glostrup, Denmark) (reaction mixture:antibodies 2:1 (v/v) ratio) [21], and the concentration of hydrolyzed TG was measured.

Statistical analysis was performed using STATISTICA 13 software (StatSoft Polska Sp. z. o.o., Cracow, Poland). Normality was assessed with the Kolmogorov–Smirnov test. The categorical data are presented as numbers and percentages, and a chi-squared test was used to compare the groups. The continuous data are presented as mean ± standard deviation (SD) or median (twenty-fifth–seventy-fifth percentiles). The difference between the study groups was assessed using the analysis of variance (ANOVA) with Tukey post-hoc test or Kruskal–Wallis with Dunn’s post-hoc test. In lipolysis efficiency studies, the differences between the groups were assessed using analysis of covariance (ANCOVA) with a post-hoc Bonferroni test considering VLDL-TG concentration in reaction mixtures as a covariate since TG levels are a significant variable affecting lipolysis efficiency [15]. Age was used as an additional covariate because there was a relationship between lipolysis level and age. Lipid and apolipoprotein VLDL components were not included in the analysis since they were closely correlated with VLDL-TG level. The correlation between the variables was analyzed by Pearson’s correlation coefficient. Values of p < 0.05 were considered statistically significant.

VLDL and HDL were isolated from serum (Section 2.2), and the concentration of lipids and apolipoproteins in serum, VLDL and HDL was assessed (Section 2.4).
The median serum TG level for the HL group was 164 mg/dL, and it was higher compared to the NL and HC groups by 103% and 62%, respectively, on average (p < 0.001) (Table 1). For the HL group, the mean TC, LDL-C, and apo B concentrations were 240 mg/dL, 147 mg/dL, and 110 mg/dL, respectively, and for HC group they were 215 mg/dL, 149 mg/dL, and 105 mg/dL, respectively. These levels were significantly higher compared to the NL group (p < 0.001) (Table 1). There were also significant differences in serum PL, apo CII, apo CIII, and apo E levels between the groups: the highest levels were obtained for the HL group and were 259 mg/dL, 5.88 mg/dL, 16.68 mg/dL, and 5.28 mg/dL, respectively. Regarding apo CII, apo CIII, and apo E levels, the difference between the NL and the HL groups was high and amounted to 67%, 91%, and 68%, respectively (Table 1).
With regard to VLDL composition, the highest lipid (TG 139 mg/dL, TC 26 mg/dL, PL 46 mg/dL) and apolipoprotein (apo B 10.40 mg/dL, apo CII 2.87 mg/dL, apo CIII 7.29 mg/dL, apo E 1.16 mg/dL) levels were obtained for the HL group. This group was characterized by significantly higher levels of lipids and apolipoproteins compared to both the NL and HC groups (p < 0.001) (Table 1).
With regard to the HDL components, the HC and HL groups had significantly lower mean apo AI concentrations (166 mg/dL and 181 mg/dL, respectively) compared to the NL group (221 mg/dL). Additionally, the HL group was characterized by a statistically higher mean apo E level of 1.27 mg/dL compared to the NL group (0.86 mg/dL). In terms of the TG, cholesterol, PL, apo CII, and apo CIII levels in HDL, there were no significant differences between the groups (Table 1).

The results from our study showed that LPL-mediated VLDL lipolysis was disturbed in young and middle-aged subjects asymptomatic for CVD but with lipid disturbances—not only in those with elevated TG and LDL-C concentration but also in those with isolated hypercholesterolemia. HDL was able to increase the efficiency of VLDL lipolysis in subjects with an abnormal lipid profile, but it should be noted that dysfunction of HDL might impair this activity.
It can be concluded that the reduction in VLDL susceptibility to lipolysis in hypercholesterolemic subjects adversely affects TRL metabolism. It can also be an additional risk factor for HTG development and consequently increase the CVD morbidity and mortality risk. The results of our study provide additional evidence for the need to implement hypocholesterolemic treatment as soon as possible, even in asymptomatic CVD patients at the early stages of lipid disturbances.

The study was approved by the Independent Bioethics Commission for Research of the Medical University of Gdańsk, Poland (No. NKBBN/612/2017–2018, date 23 January 2018).

The authors acknowledge the principal and employees of the Non-public Health‑Care Center for their help in recruiting study participants. 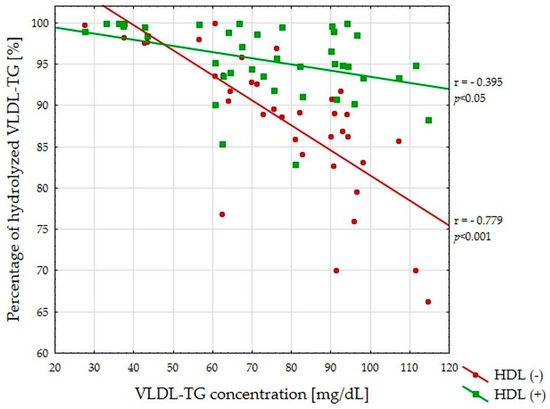 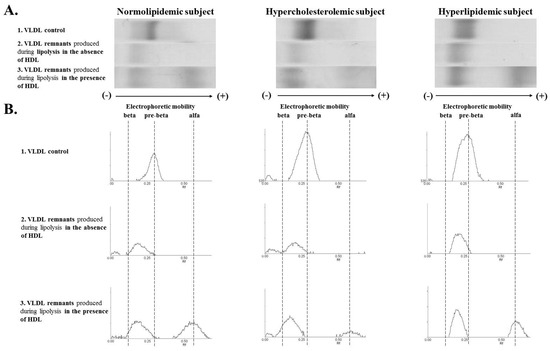 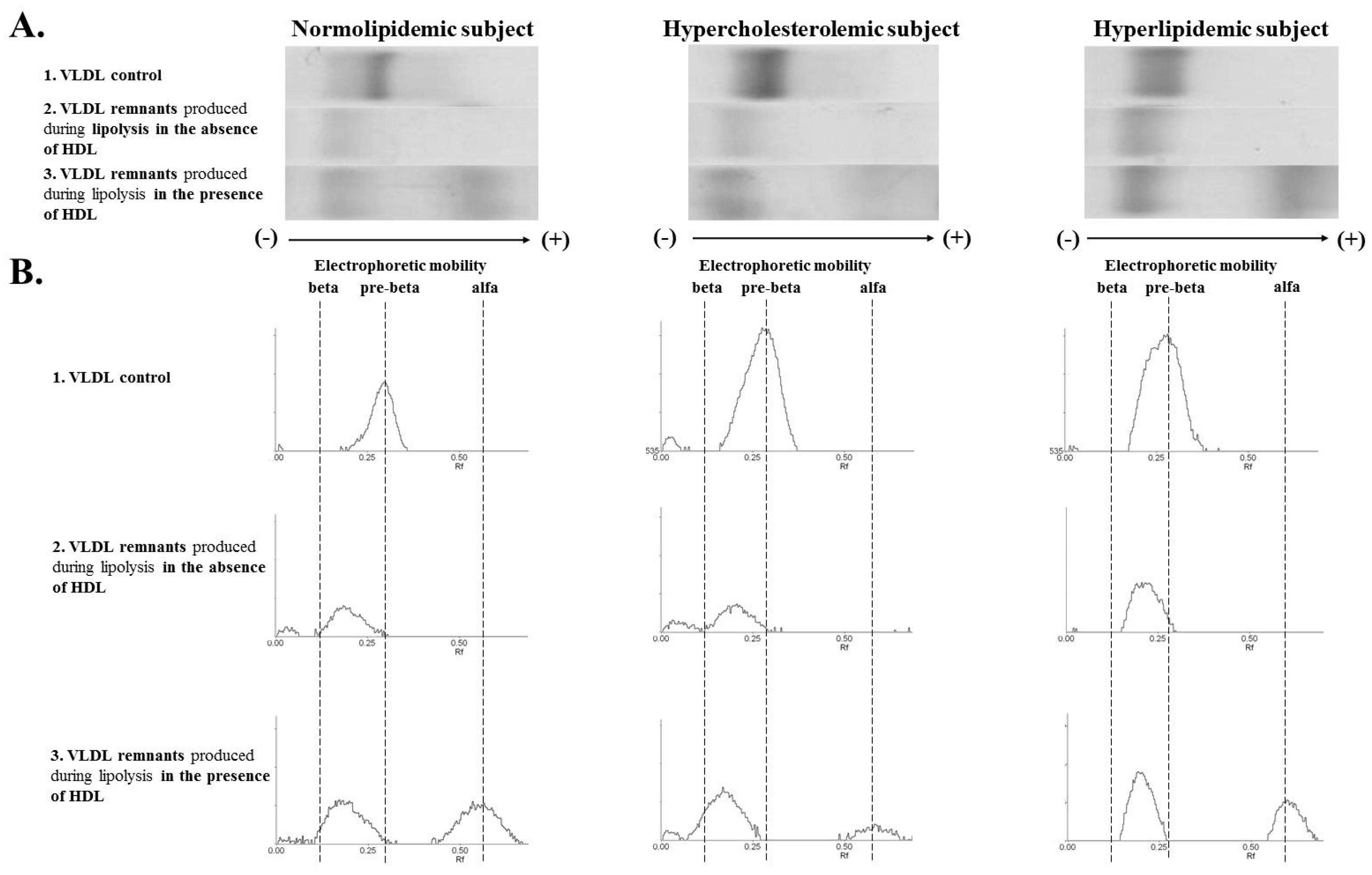 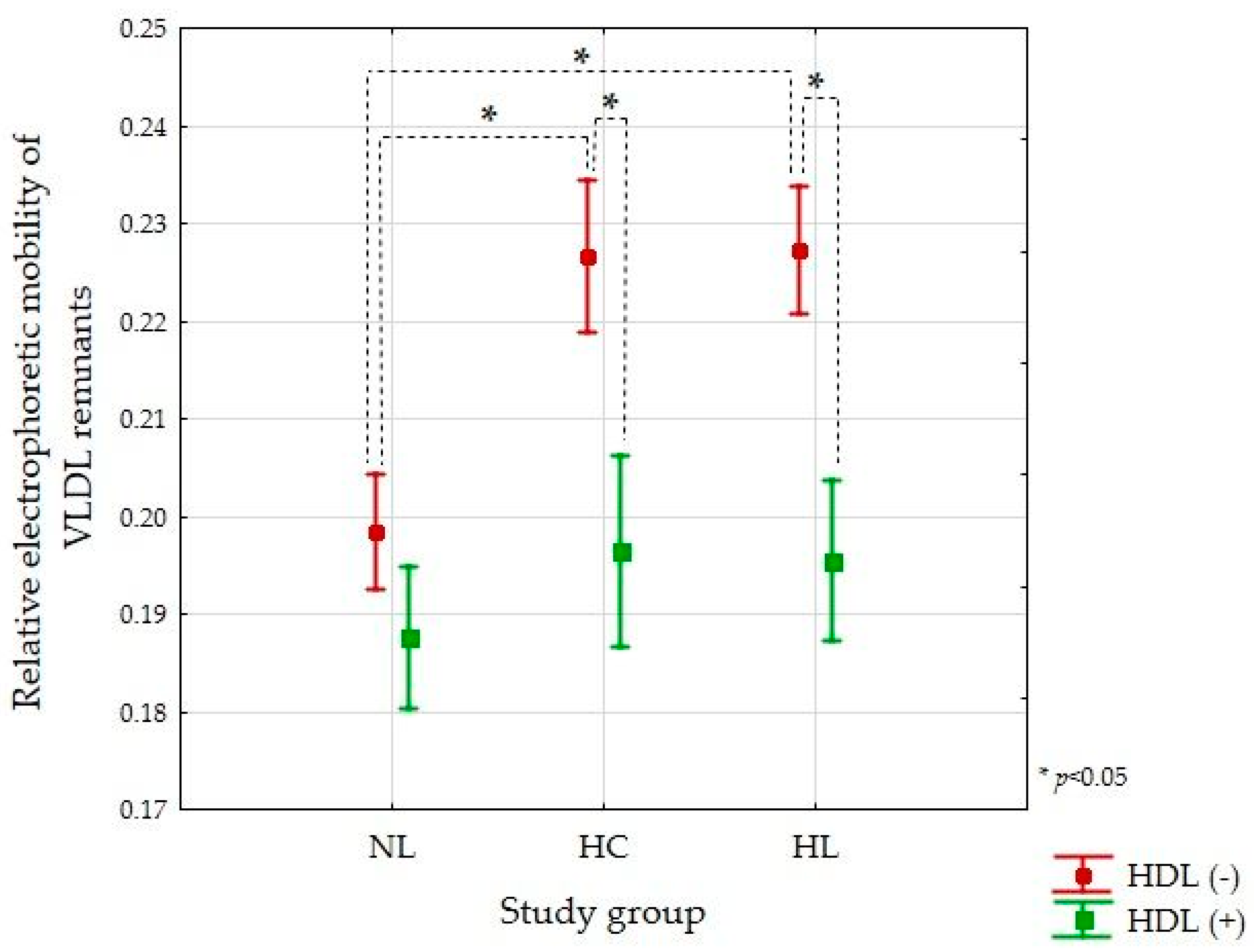 Table 1. Characteristics of study groups and lipid and apolipoprotein levels.
Table 1. Characteristics of study groups and lipid and apolipoprotein levels.
NL group: low-density lipoprotein cholesterol (LDL-C) < 115 mg/dL, triglyceride (TG) < 150 mg/dL; HC group: LDL-C ≥ 115 mg/dL, TG < 150 mg/dL; HL group: LDL-C ≥ 115 mg/dL, TG ≥ 150 mg/dL. Data are presented as mean ± SD or median (twenty-fifth–seventy-fifth percentiles); a p-value obtained by ANOVA with Tukey post-hoc test; b p-value obtained by Kruskal–Wallis with Dunn’s post-hoc test; c p-value obtained by Chi-square test; d p < 0.05 vs. NL group; e p < 0.05 vs. HC group.
© 2021 by the authors. Licensee MDPI, Basel, Switzerland. This article is an open access article distributed under the terms and conditions of the Creative Commons Attribution (CC BY) license (https://creativecommons.org/licenses/by/4.0/).
We use cookies on our website to ensure you get the best experience. Read more about our cookies here.
Accept
We have just recently launched a new version of our website. Help us to further improve by taking part in this short 5 minute survey here. here.
Never show this again