Probiotics seem to have promising effects in the prevention and treatment of allergic conditions including atopic dermatitis (AD) and food allergy. The purpose of this multicenter randomized placebo-controlled trial was to evaluate the effectiveness of a probiotic preparation comprising Lactobacillus rhamnosus ŁOCK 0900, Lactobacillus rhamnosus ŁOCK 0908, and Lactobacillus casei ŁOCK 0918 in children under 2 years of age with AD and a cow’s milk protein (CMP) allergy. The study enrolled 151 children, who—apart from being treated with a CMP elimination diet—were randomized to receive the probiotic preparation at a daily dose of 109 bacteria or a placebo for three months, with a subsequent nine-month follow-up. The primary outcomes included changes in AD symptom severity assessed with the scoring AD (SCORAD) index and in the proportion of children with symptom improvement (a SCORAD score decreased by at least 30% in comparison with that at baseline). After the three-month intervention, both the probiotic and placebo groups showed a significant (p < 0.0001) decrease in SCORAD scores, which was maintained nine months later. The percentage of children who showed improvement was significantly higher in the probiotic than in the placebo group (odds ratio (OR) 2.56; 95% confidence interval (CI) 1.13–5.8; p = 0.012) after three months. Probiotics induced SCORAD improvement mainly in allergen sensitized patients (OR 6.03; 95% CI 1.85–19.67, p = 0.001), but this positive effect was not observed after nine months. The results showed that the mixture of probiotic ŁOCK strains offers benefits for children with AD and CMP allergy. Further research is necessary to assess the effect of probiotic supplementation on the development of immune tolerance (NCT04738565). View Full-Text
Keywords: probiotics; atopic dermatitis; food allergy; cow’s milk protein allergy; Lactobacillus rhamnosus; Lactobacillus casei probiotics; atopic dermatitis; food allergy; cow’s milk protein allergy; Lactobacillus rhamnosus; Lactobacillus casei
►▼ Show Figures 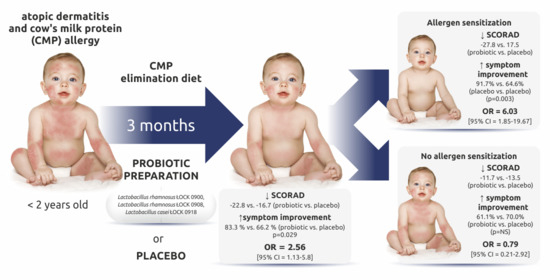