Prevalence of Hypovitaminosis C and its Relationship with Frailty in Older Hospitalised Patients: A Cross-Sectional Study
Previous Article in Journal

Feasibility of Vitamin C in the Treatment of Post Viral Fatigue with Focus on Long COVID, Based on a Systematic Review of IV Vitamin C on Fatigue

Fatigue is common not only in cancer patients but also after viral and other infections. Effective treatment options are still very rare. Therefore, the present knowledge on the pathophysiology of fatigue and the potential positive impact of treatment with vitamin C is illustrated. Additionally, the effectiveness of high-dose IV vitamin C in fatigue resulting from various diseases was assessed by a systematic literature review in order to assess the feasibility of vitamin C in post-viral, especially in long COVID, fatigue. Nine clinical studies with 720 participants were identified. Three of the four controlled trials observed a significant decrease in fatigue scores in the vitamin C group compared to the control group. Four of the five observational or before-and-after studies observed a significant reduction in pre–post levels of fatigue. Attendant symptoms of fatigue such as sleep disturbances, lack of concentration, depression, and pain were also frequently alleviated. Oxidative stress, inflammation, and circulatory disorders, which are important contributors to fatigue, are also discussed in long COVID fatigue. Thus, the antioxidant, anti-inflammatory, endothelial-restoring, and immunomodulatory effects of high-dose IV vitamin C might be a suitable treatment option.
Keywords: ascorbic acid; post-viral fatigue; lack of concentration; sleep disturbances; depression ascorbic acid; post-viral fatigue; lack of concentration; sleep disturbances; depression

For the narrative feasibility analysis, the search terms “fatigue” and “review” as well as “fatigue” and “oxidative stress” were used in the Medline database.
For the systematic review, the Medline and Cochrane Central databases were searched: Medline with the mesh terms “fatigue” and “ascorbic acid” and Cochrane Central (PubMed, Embase, ICTRP, CT.gov (accessed on 25 February 2021)) with “fatigue” and “vitamin C”. The results were screened by the authors for clinical studies with IV vitamin C. Eligibility criteria were the evaluation of fatigue by a score and the therapeutic use of IV vitamin C > 1g. Studies detected via secondary literature were supplemented. As fatigue was investigated in the context of the EORTC-Q30 in studies on quality of life in oncological patients treated with high-dose vitamin C, these studies were added to the search result.

The search in PubMed for the search terms "fatigue" and "ascorbic acid" resulted in 43 publications, the search in Cochrane Central resulted in 62 publications, 6 were identified via publications that used EORTC Q30 questionnaires, and 8 were duplicates. Ninety-three publications were excluded because they were not clinical studies (n = 31), were case reports (n = 2), or they did not meet the eligibility criteria (because they used oral vitamin C, often combined with several substances (n = 37), did not use vitamin C (n = 20), or were study registrations without published results (n = 3)). From the 10 full-text publications, one was discarded because there was no information as to how intensity of fatigue was measured. (Figure 1).
From the nine identified clinical studies with 720 participants, three were randomized and controlled studies, one was a retrospective controlled cohort study, one was a phase I study, one was a before-and-after study, and the remaining ones were prospective observational studies.
For the evaluation of fatigue, four studies used EORTC QLQ-C30, three used a Likert scale and, two used a numeric rating scale. The IV vitamin C doses administered ranged from appr. 3.5 g to >75 g/day (three studies with >50 g, two studies with 10 g, three studies with 7.5 g, and one with approximately 3.5 g).
Three of the four controlled trials observed a significant decrease in fatigue in the vitamin C group compared to the control group (p < 0.005). In all observational before-and-after studies, a reduction in fatigue was reported. In the four studies that performed a statistical comparison of the pre–post values, the differences were significant (p < 0.01) (Table 1).

Oxidative stress and inflammation can cause and maintain fatigue, cognitive impairment, depression, and sleep disturbances. They disrupt the formation and functioning of important neurotransmitters and of blood circulation. Vitamin C is one of the most effective physiological antioxidants, showing anti-inflammatory effects, especially if applied intravenously in pharmacological doses. It restores endothelial function, and it is an enzymatic co-factor in the synthesis of various neurotransmitters.
High-dose IV vitamin C has been investigated in four controlled and five observational or before-and-after studies in patients with cancer, allergies, and herpes zoster infections. The results show a reduction in fatigue and attendant symptoms such as sleep disturbances, depressive symptoms, pain, and cognitive disorders.
COVID-19 is a multisystem disease in which oxidative stress is partly responsible for excessive inflammation and circulatory disorders such as immune thrombosis. Vitamin C deficiency has been demonstrated in COVID-19 and other acute severe infections and should also be investigated in long COVID. Furthermore, the effects of high-dose IV vitamin C on long COVID-associated fatigue should be investigated in clinical trials.

Charge for the open-access journal was sponsored by Pascoe Pharmazeutische Praeparate GmbH, Germany.

K.K. declare that she has no competing interests. C.V. is employed part time at Pascoe Pharmazeutische Praeparate GmbH (Giessen, Germany). 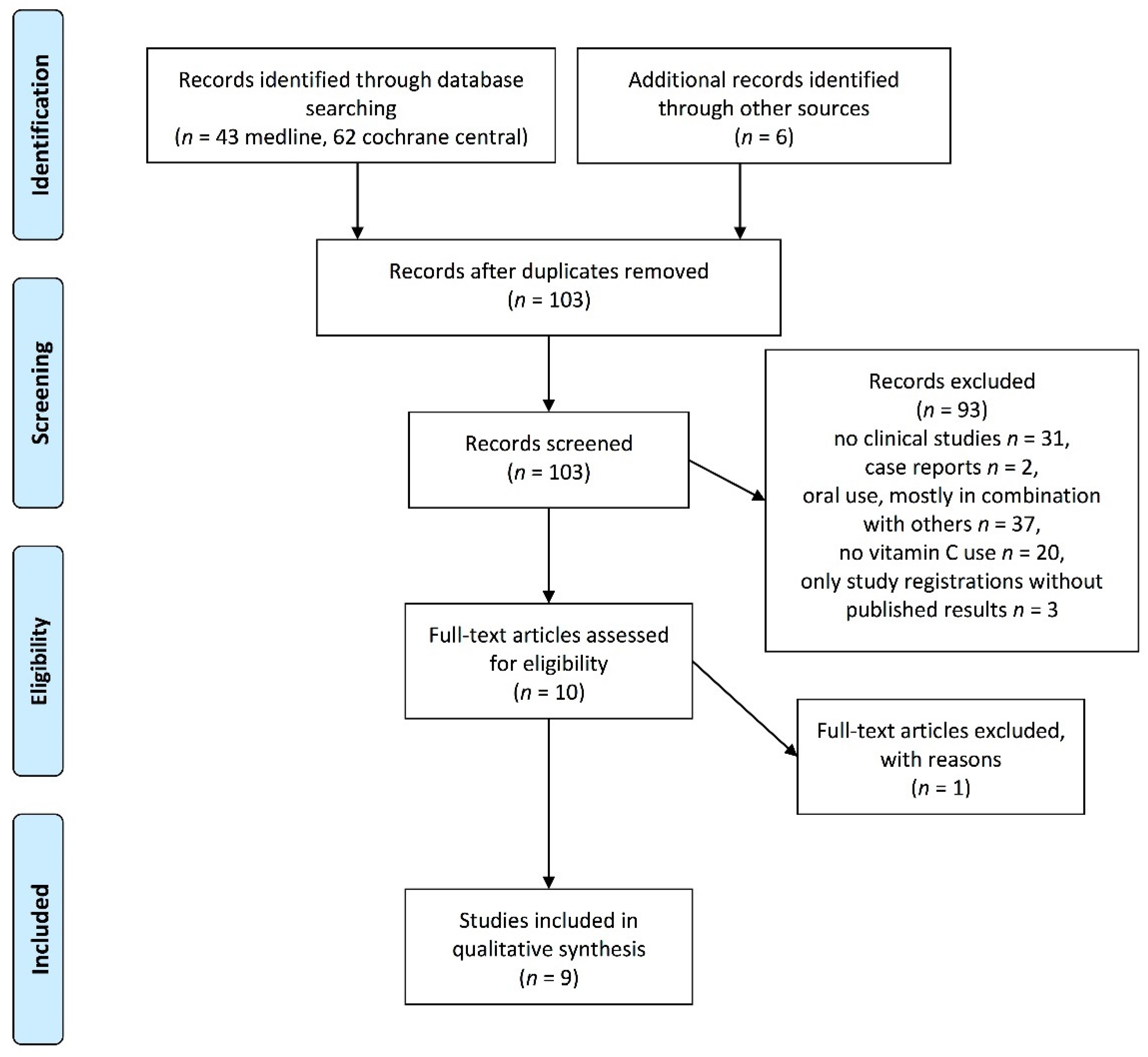