Eating Habits and Lifestyles during the Initial Stage of the COVID-19 Lockdown in China: A Cross-Sectional Study
Previous Article in Journal

Iron Protein Succinylate in the Management of Iron Deficiency Anemia: A Comparative Study with Ferrous Sulphate at Low and High Therapeutic Doses

Type 2 diabetes is a common disease and a growing public health issue worldwide [1]. The disease increases the risk of cardiovascular morbidity and mortality, which can be reversed by risk factor control with lifestyle intervention [2]. A healthy diet is recommended and an important step in improving cardiovascular health [3]. However, scientific evidence is inconclusive, as different diets, e.g., the ketogenic and the Mediterranean diet, improve cardiovascular risk factors and glucose control [4,5]. Generally, a low intake of fat and a moderate intake of carbohydrates, preferably unrefined, is advised [3,6]. Evidence suggests beneficial effects of limiting added sugar intake, replacing saturated fats with unsaturated fats, and limiting calorie intake in the case of patients who are overweight. These recommendations are also given to individuals with type 2 diabetes [7,8].
A Paleolithic diet is based on what anthropological research has suggested was eaten during the Paleolithic age, but geographical location had a large effect on food availability [9,10].
Some reports suggest that the Paleolithic diet could be effective for the prevention and treatment of type 2 diabetes [10,11]. The diet consists of lean meat, poultry, fish, shellfish, vegetables, fruits, berries, eggs, nuts, and seeds. Legumes, dairy products, cereals, sugar, salt, and processed fats are excluded. The Paleolithic diet does not include recommendations for specific macronutrient proportions. Thus, the ratio of macronutrients in various Paleolithic diets varies substantially: 28–58% fat, 22–40% carbohydrates, and 9–35% protein [12].
In most intervention studies with the Paleolithic diet macronutrient composition is not fixed but diet composition is studied instead [10,13]. The Paleolithic diet has been shown to improve glucose tolerance, blood pressure, plasma insulin, and plasma triglyceride levels independent of decreased weight and waist circumference in patients with ischemic heart disease, as well as healthy individuals [14,15]. In obese postmenopausal women, the Paleolithic diet had a higher impact on weight and triglycerides than a diet based on the Nordic Nutrition Recommendations [16]. Short-term interventions ranging from 10 days to 12 weeks have also shown positive effects on glycaemic control and cardiovascular risk factors in both individuals with type 2 diabetes and in a healthy population [17,18,19].
A meta-analysis summarized the results of eight randomized controlled trials that compared the Paleolithic diet to various other recommended diet, e.g., the American diabetes association recommended diet, the Nordic nutrition recommendations and the Mediterranean like diet [20]. The meta-analysis showed that a Paleolithic diet promotes weight loss, lowers BMI and waist circumference, and improves fat mass, systolic blood pressure (SBP), and diastolic blood pressure (DBP), as well as triglycerides, LDL, and HDL cholesterol when compared to other healthy diets [20]. Adherence to the diet can modify the effects on these outcomes [21]. However, most dietary interventions rarely report adherence to the diet and simply state that reporting bias could have affected the results.
In a previous study, subjects with type 2 diabetes were asked to follow a Paleolithic diet and were randomized to either supervised exercise or not for 12 weeks. Participants in this study decreased their weight, fat mass, blood pressure, triglycerides, HbA1c, and fasting glucose as previously reported [22]. However, whether the degree of adherence to the Paleolithic diet recommendations predicted outcomes at the end of the intervention is unclear. Therefore, the aim of the present study was to elucidate whether the degree of adherence to the Paleolithic diet modified the intervention outcome with respect to BMI, fat mass, blood pressure, triglycerides, HbA1c, and fasting glucose.

In this randomized controlled trial, 32 individuals with type 2 diabetes were asked to follow a Paleolithic diet for 12 weeks. Participants were randomized to either a supervised exercise regimen three times per week which constituted the exercise group. The other group were given general recommendations to perform 30 min of unsupervised exercise daily, as recommended for all individuals with type 2 diabetes (diet only group). Measurements from baseline and 12 weeks were analyzed. The secondary analysis reported in this paper is an observational study investigating the association between different measurement in a regression analysis. Moreover, a non-randomized observational group was examined twice as a reference.

Study participants were recruited in 2012 from the surrounding areas of Umeå, Sweden. Inclusion criteria were type 2 diabetes (duration < 10 years) with either dietary treatment and/or metformin, BMI 25–40 kg/m2, <5% change in weight during the last 6 months, and age 30–70 years for males and postmenopausal up to 70 years of age for women. Exclusion criteria were blood pressure >160/100 mmHg, treatment with beta-blockers, macroalbuminuria, heart disease, smoking, or the use of any antidiabetic drugs other than metformin. Participants’ baseline characteristics are reported in Table 1.
Inclusion criteria for the secondary analysis of this present study was that the participant registered a 4-day self-reported, weighed, food record at both baseline and the endpoint of the study. One participant had no metabolic outcomes recorded but was included in the analysis of anthropometric measurements. The study was approved by the Regional Ethical Review Board, Umeå, Sweden (Dnr2011-294-31M), registered at clinicaltrials.gov (NCT01513798). All participants gave written informed consent.

All the participants were instructed to eat a Paleolithic diet as shown in Table 2. Food items considered Paleolithic were lean meats, poultry, fish, seafood, fruits, nuts, berries, seeds, vegetables, and mainly water to drink. Food items that were excluded from the Paleolithic diet included legumes, cereals, sugar, salt, processed foods, and dairy products. Participants were given information about the Paleolithic diet, different recipes, practiced in cooking sessions and were encouraged to ask questions about the diet. The intervention is described in detail in a previous paper [22].

Dietary intake was assessed using four-day self-reported weighed food records in which all foods, beverages, and leftovers were weighed and estimated at baseline and at 12 weeks. In certain cases—e.g., restaurant visits—the Swedish Food Agency’s portion guide was used to estimate the amounts of food eaten [23]. If a complete meal—e.g., a meat stew—was added to the record, the participants were asked by the project dietitian about the specific ingredients and proportions of the meal. Additional information, such as cooking methods and other comments, were added by the participants. Any questions regarding food records were addressed during meetings, via email, or by phone. The nutritional calculation program Dietist XP v.3.2 was used to calculate energy and nutrient intake from the food records of all participants using the database from the Swedish Food Agency (v.2011-02-14), which contains approximately 2000 different food items.

2.5. Calculation of the Paleo Ratio and Other Ratios

Foods included in the 4-day self-reported weighed food records were grouped into Paleolithic and non-Paleolithic foods as summarized in Table 2. In cases of uncertainty regarding whether a food item was Paleolithic, the food item was discussed with a qualified dietician and within the research group.
A Paleo ratio was calculated by dividing the energy content (kcal) of the Paleolithic food items by the total energy intake (kcal). The Paleo ratio was used to assess the proportion of Paleolithic food items in the diet at baseline and after 12 weeks. Only at 12 weeks participants were instructed to follow the Paleolithic diet. For example, if a participant ate 10,000 kcal for 4 days, with Paleolithic foods making up 6000 kcal, the Paleo ratio was calculated as 6000/10,000 kcal = 0.6 (e.g., 60% of the diet was Paleolithic). Using a ratio and analyzing a dietary pattern instead of analyzing specific foods or nutrients is considered a good approach when studying dietary effects on diseases [24].
A monounsaturated/saturated fatty acids ratio (MUFA/SFA ratio) was calculated by dividing MUFA (gram) by SFA (gram) based on the participants food records at baseline and at 12 weeks. The polyunsaturated/saturated fatty acids ratio (PUFA/SFA ratio) was based on the ratio of PUFA (gram) to SFA (gram) reported at baseline and at 12 weeks. A protein/carbohydrate ratio was calculated by dividing protein intake (gram) by carbohydrate intake (gram) based on the participants food records at 12 weeks.

A higher degree of adherence to a Paleolithic diet was associated with beneficial effects on fat mass, body weight, waist circumference, systolic blood pressure and triglycerides. Although the reduction of systolic blood pressure seems to be mainly caused by weight loss, improvements in triglyceride levels were shown regardless of weight loss and may be caused by improved fat quality.
This suggests that focusing on strategies to improve dietary adherence is important for successful dietary interventions among individuals with type 2 diabetes. Future research focusing on methods for improving dietary adherence would be of great importance.

The study was conducted according to the guidelines of the Declaration of Helsinki, and approved by the Regional Ethical Review Board, Umeå University, Sweden (Dnr 2011-294-31M, date of approval 25/10-2011).

The authors declare that there is no duality of interest associated with this manuscript. 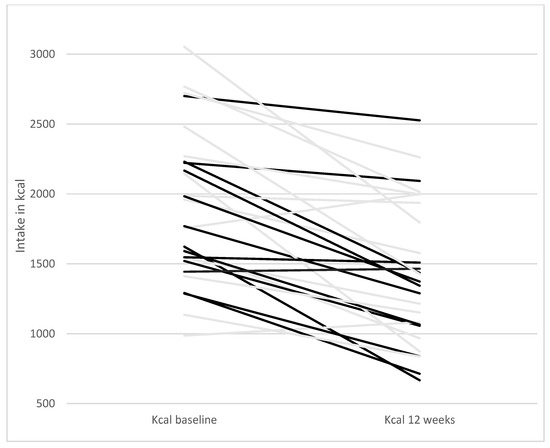 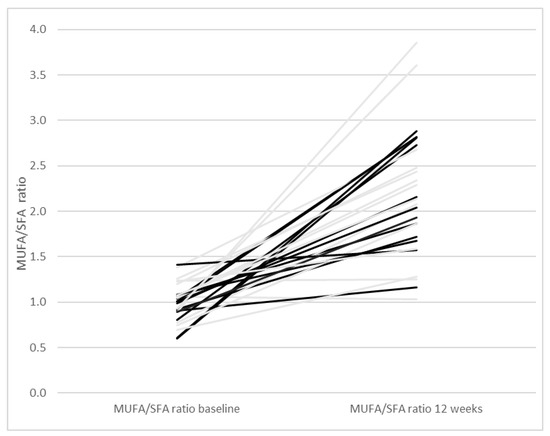