Vitamin K and D Supplementation and Bone Health in Chronic Kidney Disease—Apart or Together?
Previous Article in Journal

Background: non-autoimmune thyroid disorder is a common finding in celiac patients, more frequent than in the general population. An impairment of iodine absorption has been hypothesized, but it has never been investigated so far. We aimed to evaluate the iodine absorption in children and adolescents with newly diagnosed celiac disease. Methods: 36 consecutive celiac patients (age 7.4 years, range 2.4–14.5 years) before starting a gluten-free diet (GFD) were enrolled. We assayed the urinary iodine concentration (UIC) in a 24-h urine sample, at baseline (T0) after 3 (T1) and 12 months (T2) of GFD. Results: UIC at T0 was 64 μg/L (IQR 45–93.25 μg/L) with an iodine deficiency rate of 77.8%. UIC was not different according to histological damage, clinical presentation (typical vs atypical); we found no correlation with the thyroid function tests and auxological parameters. UIC was not statistically different at T1 (76 μg/L) and T2 (89 μg/L) vs T0. UIC at T2 was similar between patients with positive and negative anti-transglutaminase antibodies at T2. No patients presented overt hypothyroidism during the study. Conclusions: We found that iodine absorption in celiac children is impaired compared to the general population; it increases slightly, but not significantly, during the GFD. We should regularly reinforce the need for a proper iodine intake in celiac disease patients to reduce iodine deficiency risk.
Keywords: celiac disease; iodine; thyroid; urinary iodine concentration; endocrine consequences celiac disease; iodine; thyroid; urinary iodine concentration; endocrine consequences

Celiac disease (CD) is an immune-mediated systemic disorder elicited by gluten and related prolamines in genetically susceptible individuals [1]. The critical genetic elements (human leukocyte antigen DQ2 and DQ8), the auto-antigen involved (tissue transglutaminase, tTG), and the environmental trigger (gluten) are well known. The intestinal mucosal damage induced by gluten determines villous atrophy and activation/expansion of B cells responsible for autoantibodies production [2].
Autoimmune thyroid disorders (ATD) and non-autoimmune thyroid disorders (NATD) occur in 5–12% of celiac patients [3,4,5,6,7], a figure that is higher than in healthy controls [7,8,9]. In particular, NATD has been reported to be 3-times more frequent in CD than in general population [6,7]. It has been hypothesized that NATD in CD is secondary to a decreased thyroid hormones synthesis, induced either by an iodine organification defect or by a functional hypothalamic-pituitary disturbance consequent to isolated malnutrition [10,11]. Indeed, gluten withdrawal is often followed by the normalization of thyroid function [5,7].
Iodine is an essential micronutrient for the synthesis of thyroid hormones, and the first step is the absorption in the small intestine [12]. The observation that the mucosal recovery secondary to the gluten-free diet (GFD) is followed by normalization of thyroid function has reinforced the idea that iodine malabsorption contributes to NATD in CD [6]; however, this hypothesis has never been investigated so far.
In the present study, we aimed to evaluate iodine absorption in children and adolescents newly diagnosed with celiac disease before starting the GFD and up to one year later.

We performed a longitudinal study between February 2017 and May 2019 at the Pediatric Department of the University Hospital of Bari (Italy), a tertiary referral centre for the diagnosis and follow-up of endocrinological and gastroenterological disorders in our region. We recruited children and adolescent with a new diagnosis of CD. The celiac patients were followed-up for 12 months, and symptoms, auxological data, thyroid function tests, urinary iodine concentration (UIC), and anti-tTG were recorded at baseline (T0), after 3 (T1), and 12 months (T2) of GFD.

We recruited 36 children diagnosed with CD based on serologic tests and a duodenal biopsy according to the European Society for Pediatric Gastroenterology, Hepatology, and Nutrition (ESPGHAN) criteria [13]. The inclusion criteria were: 1. Diagnosis of CD according to ESPGHAN guidelines; 2. Willingness to join the study; 3. Age at recruitment <18 years. The exclusion criteria were 1. GFD before the diagnosis of CD; 2. Previous diagnosis of thyroid disease; 3. ATD at recruitment or during the 12-month follow-up; 4. Any disease that could affect thyroid function (i.e., chronic liver or renal disease, autoimmunity or malignancy); 5. Medication that could influence serum thyroid-stimulating hormone (TSH), free thyroxine (fT4), and free triiodothyronine (fT3).
The study adhered to the Declaration of Helsinki and the protocol was approved by the local ethical committee in Bari (Study number: 5200; protocol number: 26989CE); all patients/guardians/controls gave their informed consent prior to inclusion in the study.

Data collection included clinical history, growth assessment and thyroid function tests. Height (H) and weight (W) in underwear were measured and the nutritional status evaluated by the body mass index (BMI).
Serum TSH, fT4, fT3 and antibodies against thyroperoxidase (anti-TPO) and thyroglobulin (anti-TG) were assayed. Biochemical assays were performed using commercial kits (Dimension EXL integrated chemistry system LOCI Module Siemens, Erlangen, Germany) with immunoenzymatic (TSH, fT4, and fT3; TSH normal range 0.3/3.6 μg/L, fT4 normal range 0.70/1.80 ng/dL, fT3 normal range 2.2/4.2 pg/mL) and immunoradiometric techniques (anti-TPO and anti-TG antibodies). Hypothyroidism was defined as TSH above the normal values, and classified as subclinical if TSH ≤10 μg/L (levothyroxine replacement not required) or overt if TSH >10 μg/L; levothyroxine replacement was started if TSH was confirmed >10 μg/L after 4 weeks.
Serum IgA concentrations, tTG-IgA, and endomysial antibodies (EMA) were tested. Quantitative detection of tTG was assessed by an ELISA test (ORGENTEC Diagnostika; Mainz, Deutschland; cut-off value: >10 AU) and EMA-IgA by indirect immunofluorescence, using monkey’s oesophagus sections as substrate (Euroimmun Italia Diagnostica Medica SRL; Padova, Italia; cut-off >1:10). IgA levels were assayed by nephelometry in all subjects. No patients showed selective IgA deficiency (defined as serum IgA <0.05 g/L). Human leukocyte antigen (HLA) class II typing (DQA1*02:01, DQA1*03, DQA1*05, DQB1*02, DQB1*03:01/03:04, DQB1*03:02/03:05, DRB1*03, DRB1*04, DRB1*07, DRB1*11, DRB1*12) was performed by PCR sequence-specific oligonucleotide using DQ-CD Typing Plus (DiaGene, Palermo, Italy) [14].
Patients with positive serological tests for CD underwent upper endoscopy with multiple duodenal biopsies according to ESPGHAN criteria to confirm the diagnosis [13]. The same pathologist graded all biopsies specimens [15]. After recruitment, all celiac patients started GFD.
Iodine absorption was assessed by the UIC in 24 h-urine samples. The urinary iodine excretion is a very sensitive indicator of iodine intake since iodine is absorbed by the small intestine and mostly excreted by the kidney. All subjects recruited in the study were instructed by an experienced dietitian to guarantee a well-balanced diet with an adequate amount of iodized salt (daily intake of 3–5 g of salt containing 30 ppm of iodine) in keeping with the World Health Organization (WHO) program [16] for at least ten days before the measurement. Dietary recall about iodine intake and GFD was performed at each visit. Patients and controls received a proper container and were invited to collect urine from the second nicturition of the day to the first of the following morning. When the collection was returned, the urine was shaken, and two samples were obtained and immediately stored and frozen at −20 °C for later analysis. The assay was performed in the Chemistry and Clinical Biochemistry Laboratory, Catholic University School of Medicine, Rome, Italy. Urine iodine levels were analyzed by colorimetry (LTA s.r.l., Milan, Italy) using a spectrophotometric procedure based on the Sandell-Kolthoff reaction, in which iodate ion acts as a catalyst in the reduction of ceric ammonium sulphate (yellow color) to the cereus form (colorless) in the presence of arsenious acid. The specimens were treated using ammonium persulfate in advance to eliminate interfering contaminants.
In patients >6 years of age at recruitment, the iodine intake was classified as: insufficient if UIC <100 μg/L; adequate between 100 and 199 µg/L; above requirements between 200 and 299 μg/L; and excessive when ≥300 μg/L [16].
On the basis of WHO guidelines, the patients were classified on the basis of age at recruitment as 0–5 years (suggested minimal iodine intake 90 μg/day), 6–12 years (recommended iodine minimal intake 120 μg/day), and >12 years (suggested minimal iodine intake 150 μg/day) [16].

Height and BMI were expressed as standard deviation score (SDS) [17]. The statistical analysis was performed with IBM SPSS Statistics v20.0 computer software for Mac. Data were reported as median and interquartile range (IQR) and analyzed by non-parametric tests. The differences between frequencies were evaluated by the Chi-Square (χ2) test and the differences among groups by the Mann-Whitney U test or the Kruskal-Wallis H test as appropriate. The difference between paired groups was evaluated by the Wilcoxon test. Correlations were evaluated by Spearman’s correlation coefficient. Finally, patients were categorized into tertiles for UIC and BMI to compare the other continuous variables. A p-value < 0.05 (2-sided level) was considered statistically significant.

In conclusion, our data suggest that school age celiac patients present at diagnosis iodine deficiency that partially recovers after one year of a gluten-free diet. This stresses the need for proper dietetic advice on a possible long-term iodine supplementation, especially in these age group patients. Further studies in larger cohorts and hopefully over a more extended study period could be of great help to confirm or deny our findings to better understand the mechanism underlying iodine absorption in celiac patients.

The following are available online at https://www.mdpi.com/2072-6643/13/3/808/s1, Table S1. Characteristics of patients who completed the study vs patients who dropped out. No statistical differences were found between the 2 groups. Data are displayed as median (interquartile range).

The study was conducted according to the guidelines of the Declaration of Helsinki, and approved by the Local Ethic Committee of Bari (Study number: 5200; protocol number: 26989CE).

The data presented in this study are available on request from the corresponding author. The data are not publicly available due to privacy policy. 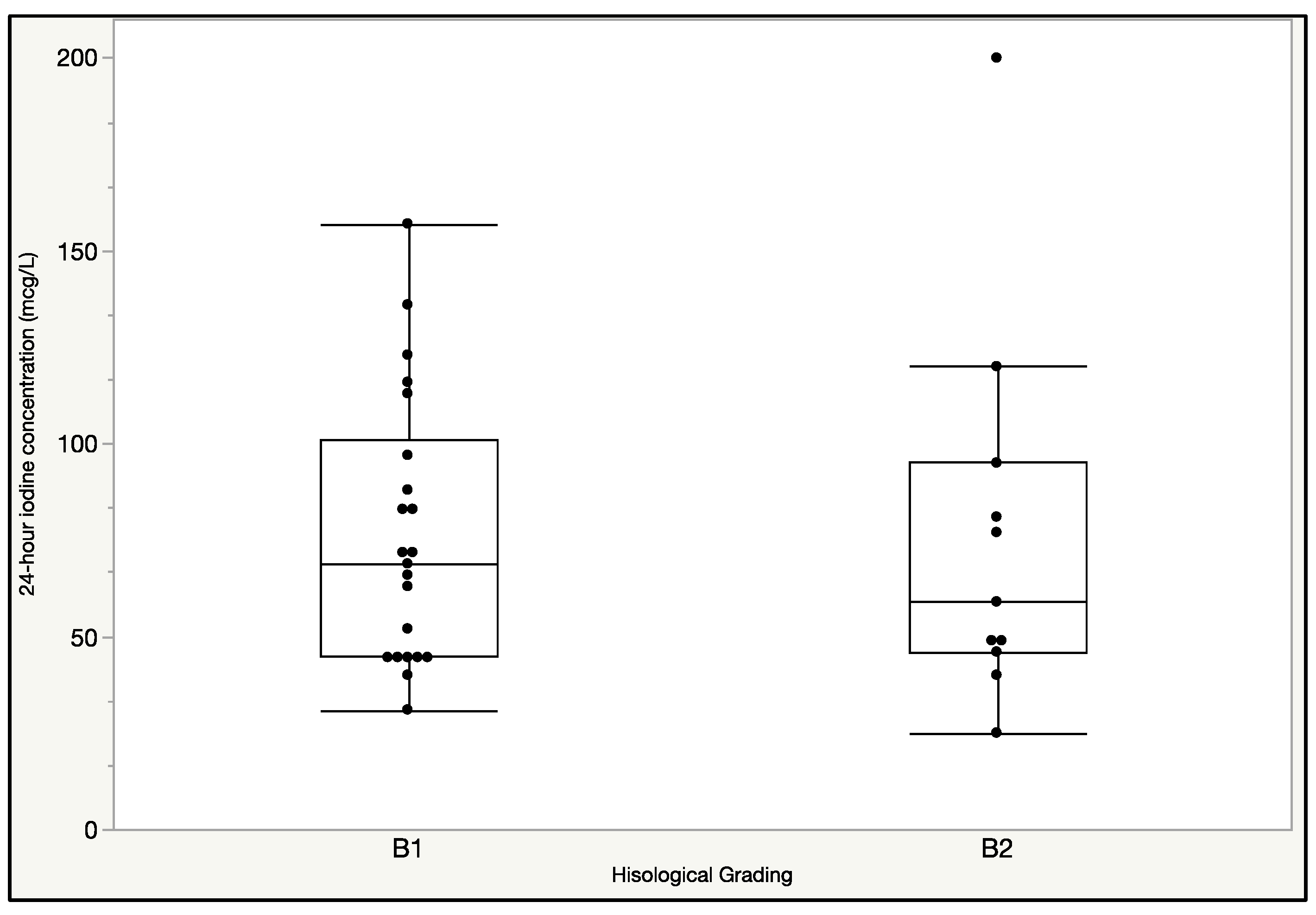