Ghrelin as a Biomarker of Stress: A Systematic Review and Meta-Analysis
Next Article in Special Issue

The use of olive pomace could represent an innovative and low-cost strategy to formulate healthier and value-added foods, and bakery products are good candidates for enrichment. In this work, we explored the prebiotic potential of bread enriched with Polyphenol Rich Fiber (PRF), a defatted olive pomace byproduct previously studied in the European Project H2020 EcoProlive. To this aim, after in vitro digestion, the PRF-enriched bread, its standard control, and fructo-oligosaccharides (FOS) underwent distal colonic fermentation using the in vitro colon model MICODE (multi-unit colon gut model). Sampling was done prior, over and after 24 h of fermentation, then metabolomic analysis by Solid Phase Micro Extraction Gas Chromatography Mass Spectrometry (SPME GCMS), 16S-rDNA genomic sequencing of colonic microbiota by MiSeq, and absolute quantification of main bacterial species by qPCR were performed. The results indicated that PRF-enriched bread generated positive effects on the host gut model: (i) surge in eubiosis; (ii) increased abundance of beneficial bacterial groups, such as Bifidobacteriaceae and Lactobacillales; (iii) production of certain bioactive metabolites, such as low organic fatty acids; (iv) reduction in detrimental compounds, such as skatole. Our study not only evidenced the prebiotic role of PRF-enriched bread, thereby paving the road for further use of olive by-products, but also highlighted the potential of the in vitro gut model MICODE in the critical evaluation of functionality of food prototypes as modulators of the gut microbiota. View Full-Text
Keywords: FOS; MICODE; microbiota; olive byproduct; prebiotic; VOCs; qPCR; 16S-rDNA MiSeq FOS; MICODE; microbiota; olive byproduct; prebiotic; VOCs; qPCR; 16S-rDNA MiSeq
►▼ Show Figures 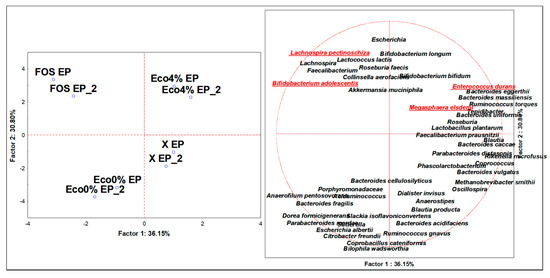