Skeletal muscle atrophy has been observed in muscle disuse during unloading, immobilization, denervation, fasting, aging, and several disease conditions. Unloading-related muscle loss caused by prolonged bed rest or spaceflight specifically occurs in antigravity muscles including in slow muscle fibers [1,2]. It has been known that the number of mitochondria in slow muscle fibers is higher than that in fast muscle fibers [3]. Mitochondria are the main energy source of skeletal muscles that produce adenosine triphosphate (ATP) through oxidative phosphorylation (OXPHOS). In this process, 0.2–2.0% of diatomic oxygen passes through the electron transport chain complexes I and III and incompletely reduces leaked electrons to superoxide anions [4]. Mitochondria play a vital role in disused skeletal muscle atrophy [5] and mitochondrial signaling can contribute to disuse muscle atrophy in three major ways [6,7,8]: (1) increased mitochondrial reactive oxygen species (ROS) production, (2) energy stress: decrease in ATP production and the activation of adenosine 5′-monophosphate–activated protein kinase (AMPK), (3) mitochondria release of pro-apoptotic factors: release of cytochrome c into the cytosol and active caspase 3. In fact, the increase of mitochondrial ROS production could participate in both the energy stress and apoptosis [9]. Therefore, mitochondrial ROS has major impact on disuse-related muscle atrophy, and the development of antioxidants to prevent the increase in mitochondrial ROS in muscle due to inactivity has been extensively researched.
Astaxanthin (AX; 3,3′-dihydroxy-β, β′-carotene-4,4′-dione), a ketone carotenoid with 13 conjugated double bonds, naturally accumulates in microalgae, yeast, crustaceans, fish epidermis, and other biologicals. Natural AX is mainly obtained from Haematococcus pluvialis, and its biological effects as an antioxidant have been widely studied [10]. The unique molecular structure of AX allows for its insertion through the lipid bimolecular layer of cell membranes, leading to stronger protection and free-radical-scavenging effects at the cell membrane than other antioxidants such as β-carotene, α-tocopherol, and vitamin C [11,12]. AX reportedly maintains mitochondrial integrity by reducing oxidative stress, prevents the loss of mitochondrial membrane potential, and increases mitochondrial oxygen consumption, which inhibits mitochondrial dysfunction [13,14,15]. Additionally, AX suppresses bleomycin-induced ROS generation and apoptosis mediated by the disturbed mitochondrial signaling pathway in type II alveolar epithelial cells [16]. These reports raise the possibility that AX acts in both the mitochondrial and cell membranes.
Although antioxidants have been shown to prevent muscle atrophy [17,18], their mechanisms of action vary owing to their different characteristics. Some studies have shown that AX might have an effect on muscle atrophy [19,20]; however, its mechanism of action in mitochondria remains unclear. This study investigated the effect of AX on muscle atrophy induced by mitochondrial oxidative stress and dysfunction. Sol8 cells (slow-type muscle cells extracted from the soleus muscle) were used to explore the underlying mechanisms.

Male C57BL/6J mice (Japan CLEA, Tokyo, Japan) (6 weeks old) were housed in a room maintained at 24 ± 1 °C and a 12 h light/dark cycle with food (Oriental Yeast Company, Tokyo, Japan) and water available ad libitum. After 1 week of acclimatation, mice were randomized into four groups: control mice fed the normal diet (C-ND, n = 6); tail-suspension mice fed the normal diet (S-ND, n = 6); control mice fed the AX diet (C-AX, n = 6); and tail-suspension mice fed the AX diet (S-AX, n = 6). An AX-supplemented diet (0.2%, w/w) or a normal diet was fed to mice for four weeks. Since then, these mice (11 weeks old) were subjected to tail suspension to establish the muscle atrophy model. Briefly, the mouse tail was fixed with medical tape; the other end of the tape was attached to the top of the cage to keep its body at a 30° angle with the surface. The forelimbs were free to move on the ground to enable free access to water. During the development of tail suspension–induced muscle atrophy, the mice continued to receive normal or AX-supplemented diets until termination of the experiment two weeks later. The soybean oil content of the AX-supplemented diet was reduced to adjust for the composition of other nutrients. The AX-supplemented diet comprised the normal diet (based on AIN-93G) mixed with BioAstin SCE (containing 10% AX; Toyo Koso Kagaku Co. Ltd., Chiba, Japan). The nutritional composition of each diet is shown in Table S1, the right hindlimb skeletal muscles including the tibialis anterior (TA), extensor digitorum longus (EDL), gastrocnemius (GA), and soleus (SO) muscles were isolated at the time of sacrifice. After measuring the wet weight, the skeletal muscles were immediately frozen in chilled isopentane with liquid nitrogen and stored at −80 °C until analysis. All animal experiments were approved by the Committee on Animal Experiments of Nagasaki University (permission no. 1803291443) and performed according to the guidelines for the care and use of laboratory animals set by the University.

Sol8 myoblastic cells were obtained from the American Type Culture Collection (Rockville, MD, USA). They were seeded in a collagen-coated plate and cultured in Dulbecco’s modified Eagle medium (DMEM) supplemented with 10% fetal bovine serum (FBS), 100 units/mL penicillin, and 100 μg/mL streptomycin and maintained at 37 °C in a 5% CO2 environment. At a confluence of 100%, Sol8 myoblasts were fused by shifting the medium to DMEM supplemented with 2% horse serum (HS). Cells were maintained in 2% HS/DMEM (differentiation medium) for 4 days for the formation of myotubes, as described previously [22].

Mitochondria from Sol8 cells, and skeletal muscle from C57BL6/j mice were prepared as previously [23,24]. Briefly, tissues or cells were minced in ice-cold CP-1 buffer (100 mM KCl, 50 mM Tris-HCl, 2 mM EGTA, pH 7.4). After homogenization by a plastic electric rod, then centrifuged at 500× g for 10 min. The supernatant was collected and further centrifuged for 10 min at 10,500× g to obtain the mitochondrial pellet and cytosolic fraction.

2.5. Detection of AX in Mitochondrial and Cytosolic Fractions

The AX contents in mitochondrial and cytosolic fractions from Sol8 myotubes were prepared, as described previously [23]. Briefly, Sol8 myotubes were treated with AX (100 nmol) or DMSO, as control, in 10 mL culture medium/100 mm dishes and incubated at 37 °C with 5% CO2 for 24 h. The cells were harvested to isolate the mitochondrial fraction as described in Section 2.4. After lyophilization, crude mitochondrial extracts and cytosol were solubilized in acetone and centrifuged at 12,000× g for 15 min. The supernatants were filtered using a 0.45 μm polytetrafluorethylene membrane and analyzed using HPLC and a spectrophotometer detector (JASCO, Tokyo, Japan) set at 460 nm. A Shim-pack CLC-ODS column (150 mm length and 6.0 mm internal diameter) was used.

All data were analyzed by one-way/two-way analysis of variance (ANOVA), using SPSS statistics software, followed by the Tukey test for individual differences between groups. p-values < 0.05 were considered to indicate significant differences.

3.1. Effect of Dietary AX on Muscle Mass and Fiber Size in Tail-Suspension Mice

To examine the effect of AX on weight gain in mice, we compared the body weights and wet weights of several muscles in the normal control and tail-suspension mice fed a normal or AX-supplemented diet. From food intake data, we found that 0.55 ± 0.15 mg/day of AX was fed to each mouse. There was no significant difference between the normal and AX-supplemented diet groups in food intake (Figure 1a). Although the body weights of mice in the S-ND and S-AX groups significantly decreased after tail-suspension, these differences were not significant (Figure 1b).
Tail suspension significantly decreased the weights of TA, GA, and SO muscles, but not that of the EDL (Figure 2). In comparison to the S-ND group, the S-AX group showed inhibition of muscle-weight reduction only in the SO. In contrast, AX supplementation failed to prevent tail suspension–induced muscle atrophy in the EDL, TA, and GA muscles.
Next, we analyzed the cross-sectional area (CSA) of the SO muscle fiber. It has been reported that tail-suspension affects slow fiber type muscles, especially type I and IIa, but not fast fiber type ones [26]. Because the soleus muscle is made up of type I fiber (30.6% ± 2.2%), type IIa fiber (49.1% ± 1.2%), type IIx (11.8% ± 1.7%), and other types of fibers, we performed different fiber typing to investigate which type of fiber was influenced by AX [21]. Multicolor immunofluorescent staining showed that it comprised MHC type I (blue) and IIa (green) myofibers. Type IIb (red) myofibers were hardly detected in the SO muscle fibers. Myofibers in the S-ND group showed decreased CSA staining and comprised type I and IIa fibers (Figure 3a), compared to the C-ND group. In contrast, the CSAs of muscle fibers stained with type I and IIa in the S-AX mice were similar to those observed in the C-AX mice (Figure 3a). We confirmed the average CSA of types I and IIa fibers in the SO muscle. Consistent with the results that indicated a decrease in muscle weights in the S-ND group, the average CSA of type I and IIa muscle fibers in the S-ND group was significantly decreased, compared to that in the C-ND group. Meanwhile, AX prevented the decrease of CSA caused by tail suspension and resulted in the increase of CSA rather than the reduction of CSA (Figure 3b). In particular, tail suspension in the S-AX group showed inhibition of the CSA reduction of muscle fibers of MHC type I and IIa.

3.2. Effect of Dietary AX on H2O2 Production in the Muscle of Tail-Suspension Mice

3.3. Effect of Dietary AX on Oxidative Phosphorylation Respiration in the Muscle of Tail-Suspension Mice

Denervation-induced muscle atrophy reportedly impairs oxidative phosphorylation complex proteins in mitochondria [27]. In addition, we found AX prevented the increase of H2O2 production caused by tail suspension. Thus, we investigated the effect of AX on the levels of oxidative phosphorylation–related protein complexes in the muscle. The amounts of complexes I and III in the SO muscle of the S-ND group were significantly lower than that of the C-ND group. In contrast, there were no significant changes between the protein complexes in the C-AX and S-AX groups (Figure 5).

3.4. Effect of AX on Mitochondrial Biogenesis in the Muscle of Tail-Suspension Mice

When muscles undergo immobilization and denervation, a series of undesirable changes occur in the mitochondria of the muscle, including inhibition of mitochondrial biogenesis [28]. Moreover, it has been reported that AX treatment stimulates mitochondrial biogenesis in the skeletal muscle [29]. Consistent with previous reports, we found that AMPKα-1 and peroxisome proliferator–activated receptor (PPAR)-γ mRNA expressions in the S-ND group were significantly decreased, compared with those in the C-ND group, whereas the S-AX group showed inhibition of the decrease of these mRNA expressions in SO muscle. In addition, the expression of Ckmt2 mRNA in the S-AX group was significantly higher than that in the S-ND group. Although there were no significant differences between S-ND and S-AX in the expression of uncoupling protein 2 (Ucp2), adenosine triphosphate 5g1 (Atp5g1), NADH: ubiquinone oxidoreductase complex assembly factor (Ndufa) and succinate dehydrogenase complex, subunit B (Sdhb), AX slightly improved the expression in tail-suspension mice (Figure 6).

3.5. Effect of AX on Mitochondrial Function in Sol8 Myotubes

3.6. The Effect of AX on the Expression of Apoptosis-Related Proteins in AnA-Treated Sol8 Myotubes

In summary, the current study revealed that AX prevented muscle atrophy in slow-type muscles (SO). The direct effect of AX on mitochondria brought about the reduction of oxidative stress, regulation of mitochondrial function such as oxidative phosphorylation, biogenesis and MMP, and attenuation of apoptosis. These effects could collectively prevent the onset of muscle atrophy. Based on these results, AX could be considered as a potential treatment option for muscle atrophy and mitochondria-related diseases.

This work was supported by a Grant-in-Aid for Scientific Research of Japan (KAKENHI) (grant number: 19K11792).

All animal experiments were approved by the Committee on Animal Experiments of Nagasaki University (permission no. 1803291443) and performed according to the guidelines for the care and use of laboratory animals set by the University. 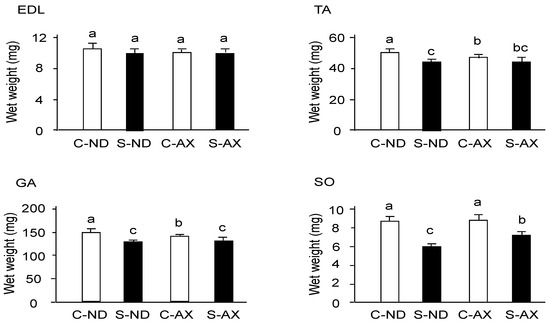 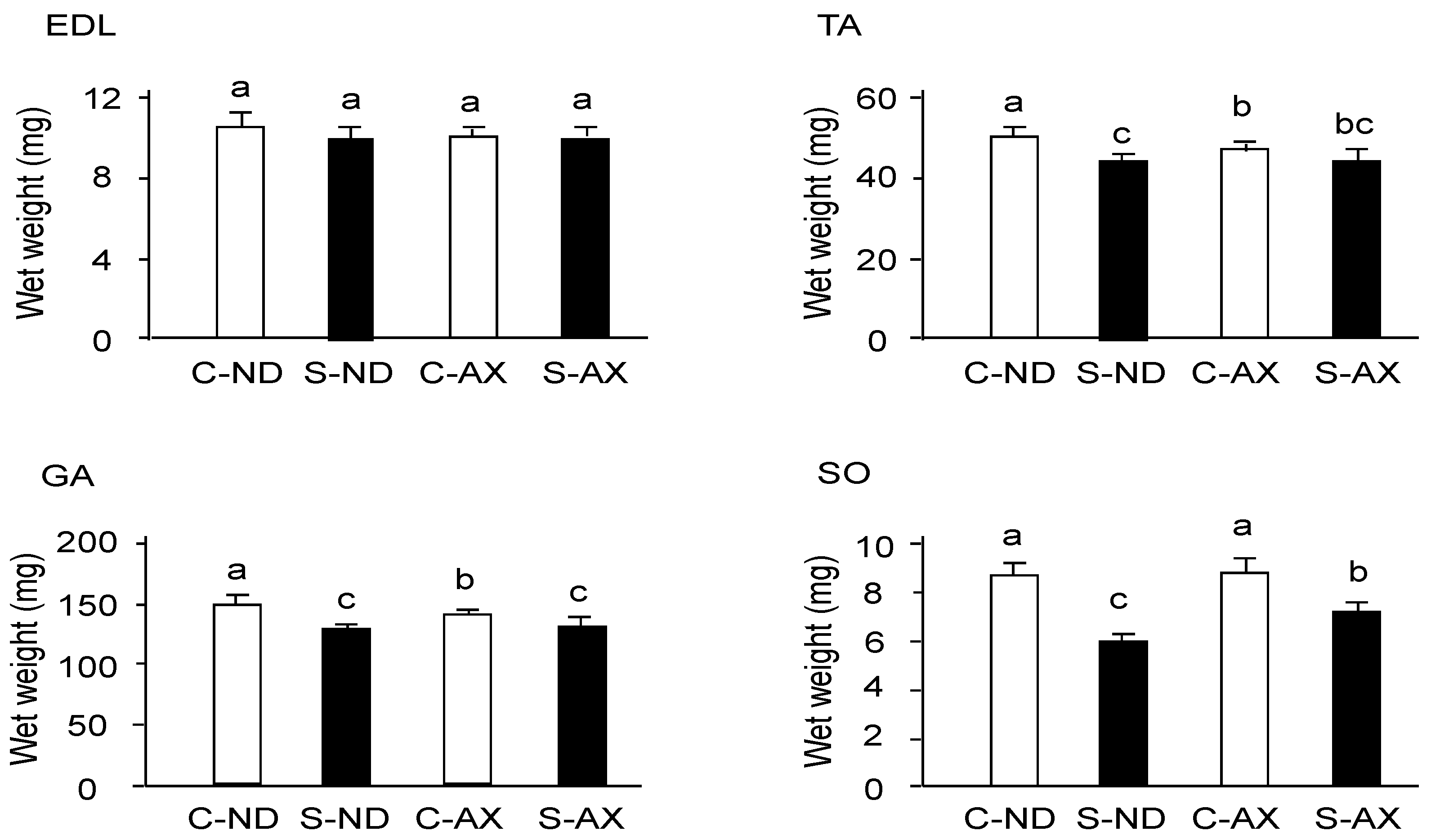 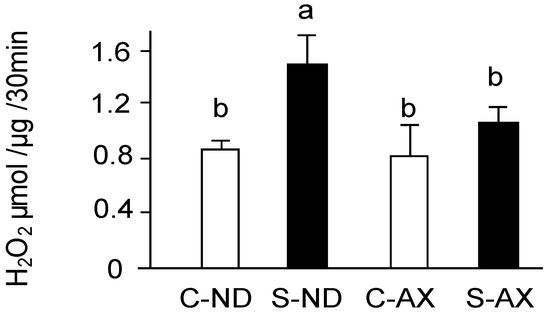 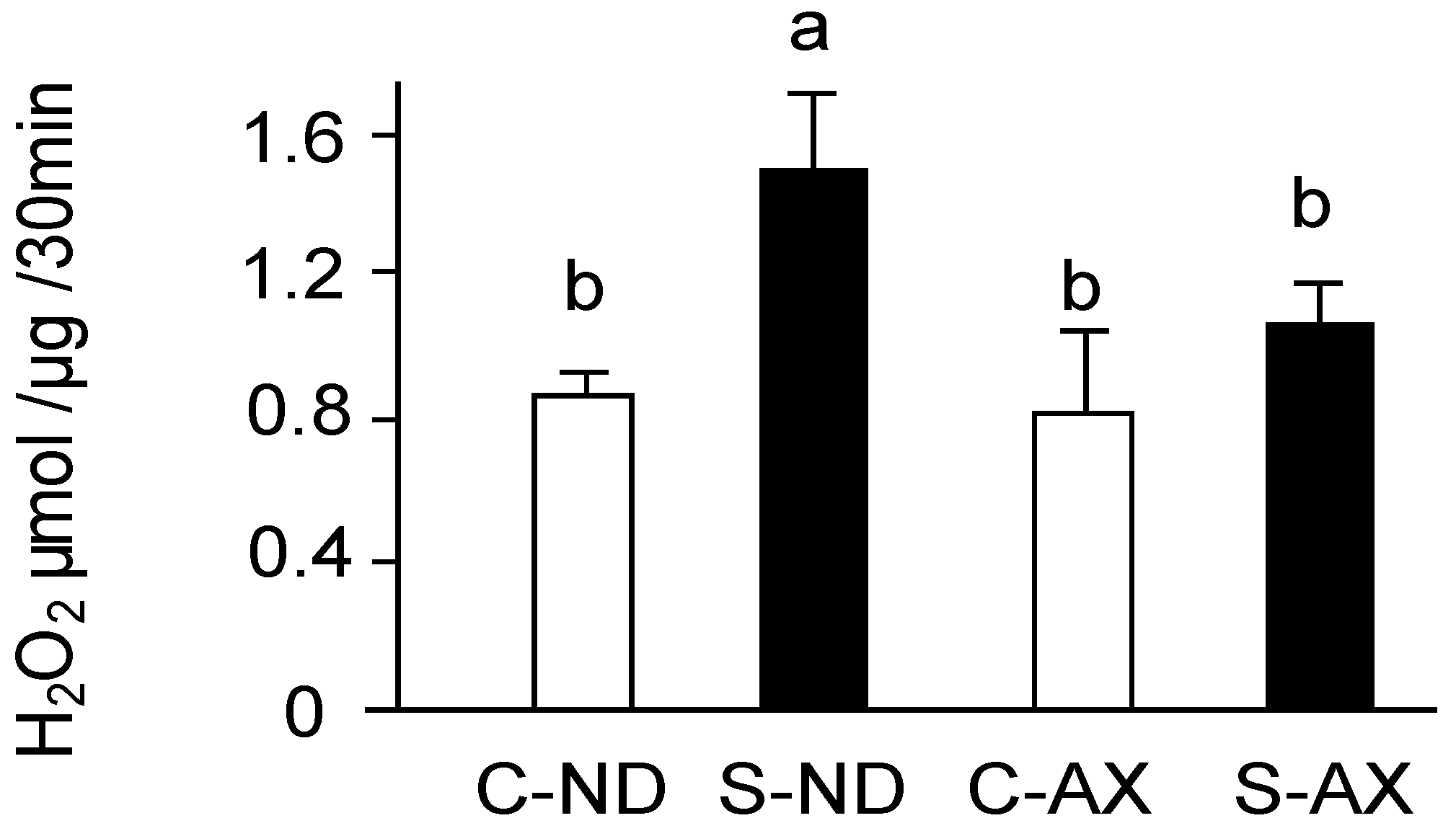