The Consumption of Food-Based Iodine in the Immediate Pre-Pregnancy Period in Madrid Is Insufficient. San Carlos and Pregnancy Cohort Study
Previous Article in Journal 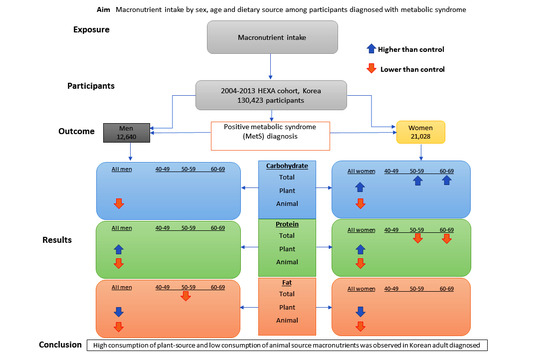 Interconnected risk factors of metabolic syndrome (MetS), such as abdominal obesity, atherogenic dyslipidemia, raised blood pressure, and insulin resistance, increase the risk of coronary heart disease, other cardiovascular diseases (CVD), and type 2 diabetes mellitus (T2DM) [1,2,3]. CVD and T2DM are global health issues with a high prevalence, and an increasing burden of economics in public health [4,5]. MetS has a high prevalence in many countries [6,7], and it has gradually increased in Korea over the last 10 years [8,9]. Although the etiology of MetS is unclear, various factors, such as genetics, metabolism, the environment, and diet, may contribute to its development [10]. A recent review highlighted a possible interconnection between gut microbial dysfunction, non-alcoholic fatty liver disease (NAFLD), and colonic diverticulosis as possible underlying risk factors of MetS [11].
Diet is an important factor in the prevention and management of MetS [12]. Previous studies reported conflicting results on the association between macronutrient intake and the risk of MetS according to gender, geographical location, and food sources [13,14,15]. In 55–80-year-old men, and women with MetS, intake of total fat above the acceptable macronutrient distribution range (AMDR), and lower intake of energy and carbohydrates were reported [16]. Plant protein, especially soy protein and wheat gluten, when compared to animal proteins, were linked to a reduced risk of MetS components [14]. In a meta-analysis of observational studies, high carbohydrate intake was associated with increased odds of developing MetS [15]. The observational study using national survey data from the United States and Korea showed not only different percentages of energy intake from carbohydrates, protein, and fat between the two countries, but also an increased risk of MetS with high carbohydrate intake only in Korean men and women [17]. This finding was attributed to the high percentage of energy from carbohydrates in Korea compared to the US.
Differential association between protein intake was also observed in Korean adults, as was a positive association between animal protein and MetS components (abdominal obesity, low HDL-C, and hyperglycemia), and a protective effect of plant protein on blood pressure in men, whereas null findings were observed in women [18]. The percentage of energy from carbohydrates in men, and specifically refined grains, including white rice, in women were associated with MetS [19].
The patterns of macronutrient intake in the Korean population with MetS have been rarely reported. Therefore, this study aimed to identify the characteristics of total energy, carbohydrate, protein, and fat intake in participants diagnosed with MetS at recruitment of the health examinees (HEXA) cohort, considering the plant and animal sources of each macronutrient. We also examined whether macronutrient intake differs by diagnosis of each metabolic syndrome component.

The Health Examinees (HEXA) Study is a community-based, large genomic cohort that was conducted in Korea from 2004 to 2013. Detailed information about the study design have been described in previous studies [20,21]. For the homogeneity and comparability of participants, a previous HEXA study was updated to the Health Examinees-Gem (HEXA-G) [22]. A total of 139,345 participants aged 40–69 years remained in the HEXA-G data after excluding withdrawers (n = 11) and participants from invalid institutions (n = 31,375). In addition, 8922 participants were excluded among the HEXA-G. These included participants with missing baseline information on hypertension, diabetes mellitus, or hyperlipidemia history (n = 600); missing data on blood pressure, fasting glucose, triglycerides, high density lipoprotein (HDL)-cholesterol, and waist circumference (WC) (n = 4540); and those with energy intake <800 or ≥4000 kcal/day in men, and <500 or ≥3500 kcal/day in women (n = 3782). Finally, 130,423 participants, of whom 43,850 were men and 86,573 were women, remained in the final sample (Figure 1). All participants gave informed written consent prior to participating in the study. The Institutional Review Board of the Seoul National University Hospital approved this study for statistical analysis (IRB No. E-1503-103-657).

Dietary information was collected using a validated semi-quantitative food frequency questionnaire (FFQ) developed for the Korean Genome and Epidemiology study (KoGES) [23]. Trained interviewers assessed the intake of 106 food items consumed by participants over the past year. Food consumption frequencies were classified into nine levels (from “never” to “three times or more a day”), and portion size into three levels (one-half, one, one and a half servings). Energy, carbohydrate, protein, and fat intake were calculated using a food composition table developed by the Korean Rural Development Administration (RDA) [24]. Plant- and animal-based carbohydrate, protein, and fat intake were determined after classification according to food source. Classification of macronutrients according to plant or animal sources was based on the guidelines of the KoGES database [25]. According to the guideline, the weighted amount of constituent foods based on the representative recipe of each food item constituting the mixed dishes are given. These amounts were used to evaluate mixed dishes, and calculate plant or animal source macronutrients. The percentage of energy from each macronutrient was calculated using the standard conversion factors: carbohydrate 4 kcal/g; protein 4 kcal/g; fat 9 kcal/g.

Demographic and lifestyle factors, such as age, marital status, education, family income, occupation, body mass index (BMI), health-related behaviors, and macronutrient intake were included. Age was categorized into three groups: 40–49; 50–59; and 60–69 years old. Marital status, education, family income, and occupation were categorized into two groups each: marital status—yes (married, cohabit), no (single, separated, divorced, widowed, others); education—12 years, 12 years or more; family income—below $3000, $3000 and above per month; occupation—occupied (11 types of occupation, including senior officials, managers, and professionals, etc.), unoccupied (unoccupied, housewife, and others). BMI was calculated as weight in kilograms divided by the square of height in meters (kg/m2). Smoking status was defined based on cut-offs used in the Atherosclerosis Risk in Communities study [28], and the HEXA study [29]. Non-smokers were defined as those who had smoked less than 400 cigarettes during their lifetime. Former smokers were defined as those who had smoked more than 400 cigarettes during their lifetime, but did not smoke at the baseline. Participants who had smoked more than 400 cigarettes during their lifetime, and still smoked at the baseline were classified as current smokers. Non-current drinkers were defined as those who had never consumed any alcoholic drink during their lifetime, or those who did not consume alcohol at baseline. Current drinkers were defined as those who still consumed alcohol. Participants were asked to report the number of times in a week, and the duration they regularly engage in activities that result in body sweating. Regular exercise was classified as engaging in activities that caused body sweating (for at least 5 days a week, lasting at least 30 min per session). Menopausal status was classified as either pre-menopausal women who currently experience monthly menstrual cycle, or post-menopausal women who have gone a year without menstrual flow.

We found low intake of total energy and fat in both men and women diagnosed with MetS, whereas high intake of carbohydrates, and low intake of protein was only observed in women. Although people diagnosed with MetS have high carbohydrate, and low protein and fat intake, this characteristic varied according to the source of macronutrients. The intake of plant carbohydrates and protein was high, whereas the intake of animal carbohydrates and protein was low. On the other hand, fat consumption was low regardless of its source. Our results suggest that plant sources of carbohydrates and protein need to be particularly evaluated when designing population-based interventions for MetS reduction. In addition, caution should be exercised when advising the population to reduce total consumption of animal foods. Also, the findings of our study need further confirmation by longitudinal cohort studies with a long follow-up duration and repeated dietary intake assessment.

The study was conducted according to the guidelines of the Declaration of Helsinki, and approved by the Institutional Review Board of Seoul National University Hospital (IRB No. E-1503-103-657).

All data and materials used in this study will be available upon reasonable request from the corresponding author. 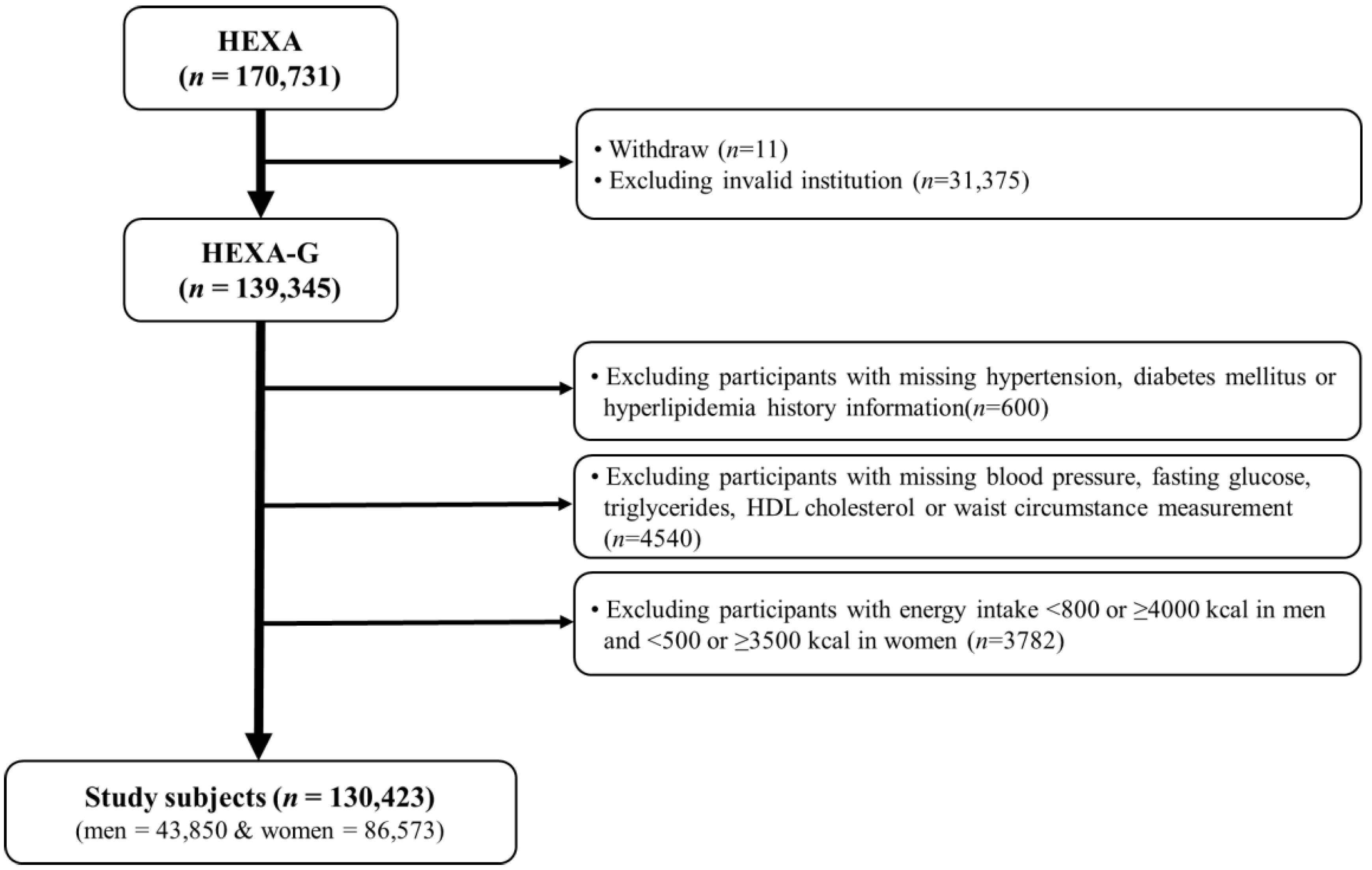