The Contributions of Food Groups to the Daily Caloric Intake in Mongolian Population: A Mon-Timeline Study
Previous Article in Journal

Gut Microbiota and Mycobiota Evolution Is Linked to Memory Improvement after Bariatric Surgery in Obese Patients: A Pilot Study

Patients with obesity are known to exhibit gut microbiota dysbiosis and memory deficits. Bariatric surgery (BS) is currently the most efficient anti-obesity treatment and may improve both gut dysbiosis and cognition. However, no study has investigated association between changes of gut microbiota and cognitive function after BS. We prospectively evaluated 13 obese patients on anthropometric data, memory functions, and gut microbiota-mycobiota before and six months after BS. The Rey Auditory Verbal Learning Test (AVLT) and the symbol span (SS) of the Weschler Memory Scale were used to assess verbal and working memory, respectively. Fecal microbiota and mycobiota were longitudinally analyzed by 16S and ITS2 rRNA sequencing respectively. AVLT and SS scores were significantly improved after BS (AVLT scores: 9.7 ± 1.7 vs. 11.2 ± 1.9, p = 0.02, and SS scores: 9.7 ± 23.0 vs. 11.6 ± 2.9, p = 0.05). An increase in bacterial alpha-diversity, and Ruminococcaceae, Prevotella, Agaricus, Rhodotorula, Dipodascus, Malassezia, and Mucor were significantly associated with AVLT score improvement after BS, while an increase in Prevotella and a decrease in Clostridium, Akkermansia, Dipodascus and Candida were linked to SS scores improvement. We identified several changes in the microbial communities that differ according to the improvement of either the verbal or working memories, suggesting a complex gut-brain-axis that evolves after BS. View Full-Text
Keywords: cognition; memory; metagenomics; microbiome; microbiota; mycobiota; obesity; bariatric surgery cognition; memory; metagenomics; microbiome; microbiota; mycobiota; obesity; bariatric surgery
►▼ Show Figures 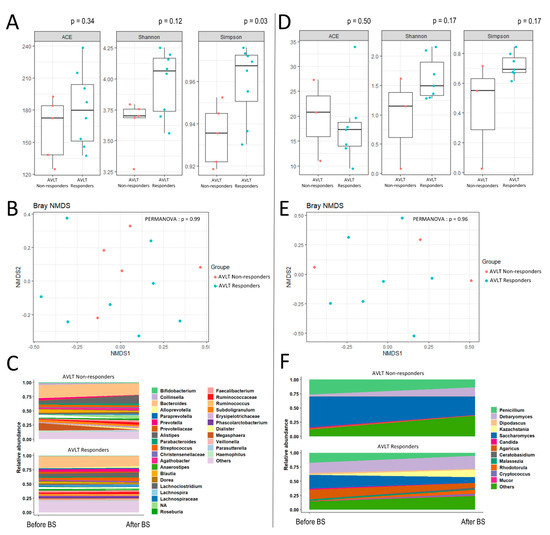