Kaempferol, Myricetin and Fisetin in Prostate and Bladder Cancer: A Systematic Review of the Literature

In addition to the taste receptors corresponding to the six basic taste qualities—sweet, salty, sour, bitter, umami, and fatty—another type of taste receptor, calcium-sensing receptor (CaSR), is found in taste-bud cells. CaSR is called the ‘kokumi’ receptor because its agonists increase sweet, salty and umami tastes to induce ‘koku’, a Japanese word meaning the enhancement of flavor characters such as thickness, mouthfulness, and continuity. Koku is an important factor for enhancing food palatability. However, it is not well known whether other kokumi-receptors and substances exist. Here, we show that ornithine (L-ornithine but not D-ornithine) at low concentrations that do not elicit a taste of its own, enhances preferences to sweet, salty, umami, and fat taste solutions in mice. Increased preference to monosodium glutamate (MSG) was the most dominant effect. Antagonists of G-protein-coupled receptor family C group 6 subtype A (GPRC6A) abolished the additive effect of ornithine on MSG solutions. The additive effects of ornithine on taste stimuli are thought to occur in the oral cavity, and are not considered post-oral events because ornithine’s effects were confirmed in a brief-exposure test. Moreover, the additive effects of ornithine and the action of the antagonist were verified in electrophysiological taste nerve responses. Immunohistochemical analysis implied that GPRC6A was expressed in subsets of type II and type III taste cells of mouse circumvallate papillae. These results are in good agreement with those reported for taste modulation involving CaSR and its agonists. The present study suggests that ornithine is a kokumi substance and GPRC6A is a newly identified kokumi receptor. View Full-Text
Keywords: L-ornithine; kokumi; basic taste solutions; taste preference; electrophysiology; chorda tympani; immunohistochemistry; GPRC6A L-ornithine; kokumi; basic taste solutions; taste preference; electrophysiology; chorda tympani; immunohistochemistry; GPRC6A
►▼ Show Figures 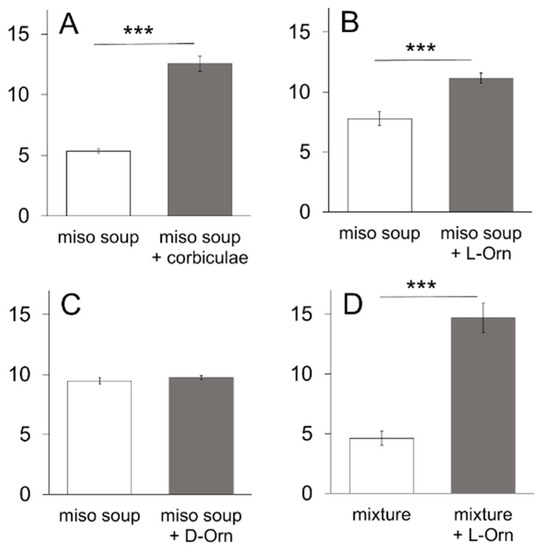