:
This study aimed to analyze the effects of live high-train low method (LH-TL) and intermittent hypoxic training (IHT) with a controlled mixed diet on lipid profile in cyclists. Thirty trained male cyclists at a national level with at least six years of training experience participated in the study. The LH-TL group was exposed to hypoxia (FiO2 = 16.5%) for 11–12 h a day and trained under normoxia for 3 weeks. In the IHT group, participants followed the IHT routine three times a week under hypoxia (FiO2 = 16.5%) at lactate threshold intensity. The control group (N) lived and trained under normoxia. The results showed that the 3-week LH-TL method significantly improved all lipid profile variables. The LH-TL group showed a significant increase in HDL-C by 9.0% and a decrease in total cholesterol (TC) by 9.2%, LDL-C by 18.2%, and triglycerides (TG) by 27.6%. There were no significant changes in lipid profiles in the IHT and N groups. ∆TG and ∆TC were significantly higher in the LH-TL group compared to the N group. In conclusion, hypoxic conditions combined with a mixed diet can induce beneficial changes in lipid profile even in highly trained athletes. The effectiveness of the hypoxic stimulus is closely related to the hypoxic training method.
Keywords:
hypoxia; intermittent hypoxic training; lipid profile; mixed diet; athletes

Exposure of the human body to hypoxic conditions, both at rest and in combination with physical exercise, contributes to the activation of numerous adaptive mechanisms. With these adaptive changes, an increase in the effectiveness of conventional training methods is observed, resulting in improvements in athletes’ exercise capacity [1,2]. In recent years, much attention has been paid to the concept of using a hypoxic environment as a therapeutic agent to support the treatment and prevention of non-communicable diseases and to improve the quality of life of patients and older adults [3].
Blood lipid profile is one of the indicators of cardiovascular disease (CVD) risk. Increases in blood levels of triglycerides (TG) and LDL cholesterol (LDL-C) and decreases in HDL cholesterol (HDL-C) are associated with an elevated risk of CVD [4]. Most studies have indicated that lipid ratios, such as Castelli’s risk index I and II (CRI-I and CRI-II) and the atherogenic index of plasma (AIP), may be more accurate predictors of cardiovascular risk than traditional lipid indicators that may remain in the normal range [5,6,7].
Regular physical activity improves the blood lipid profile [8] and atherogenic indices [9]. The range of adaptations depends on the type, frequency, intensity, and duration of exercise [10,11,12]. Athletes have higher HDL-C, lower TG, and lower total cholesterol (TC) and LDL-C than sedentary individuals [12,13,14,15,16,17]. There are also reports that did not confirm that the lipid profile of athletes differed significantly from non-athletes [18,19]. Furthermore, it worth noting that despite regular training, the values of lipid profile indices may exceed the reference range [15,20,21]. This largely depends on diet, gender, body fat mass, and the type of sport [12,18,22]. It has been shown that athletes with elevated LDL-C levels may be at higher risk for atherosclerosis and CVD [23]. This is because intense physical exercise elevates the rate of oxygen consumption, resulting in the formation of reactive oxygen species (ROS), while low-density lipoproteins (LDL) are highly susceptible to free radical-mediated oxidative modification [24].
The lipid profile of athletes can be altered by diet, supplementation [22,25,26], and rest periods during the training process [27,28]. Furthermore, environmental conditions may also affect lipid profile and CVD risk [29]. For example, populations living at high altitudes have lower CVD risk and are characterized by lower mortality [30]. Some studies have revealed that high-altitude natives have lower TC and LDL-C and higher HDL-C levels [31,32,33]. An improvement in the lipid profile was observed in participants of high-mountain expeditions [34,35], which indicates that even short stays at high altitudes (above 4000 m) may lead to beneficial health effects. It is not known, however, whether similar changes in blood occur in athletes living and training in normobaric hypoxia corresponding to moderate altitudes (2000–3000 m).
Currently, the most common variants of altitude/hypoxic training include the live high-train low (LH-TL) method and intermittent hypoxic training (IHT) [1,36,37]. The findings of recent studies indicate that IHT training performed by obese individuals enhances body fat reduction and significantly improves lipid profile [38,39,40]. Despite these reports, studies on the effects of LH-TL and IHT on the lipid profile of athletes are still lacking. Previous studies in this field have mainly focused on the efficacy of the IHT procedure only in non-athletes [41,42,43,44,45,46,47]. In our recent study [48], we found no changes in the lipid profile of athletes after short-term, six-day, passive, intermittent hypoxic exposure (IHE—6 doses of 3–8-min periods of hypoxia at FiO2 of 14–12% interrupted by 3–5-min periods of normoxia and repeated for 60–80 min). However, it remains unclear whether the use of hypoxia during prolonged passive exposure (LH-TL; 10–12 h per day) and training (IHT) can alter the lipid profile in individuals with high levels of training adaptation.
We hypothesize that the combination of hypoxia and physical exercise may contribute to beneficial changes in lipid profile and atherogenic indices in athletes. Therefore, the aim of this study was to analyze the effects of LH-TL and IHT training with a mixed diet on lipid profile and values of atherogenic indices (CRI-I, CRI-II, and AIP) in trained cyclists.

The evaluation included two research series (S1, S2). All the tests were performed during the pre-competitive period. Between S1 and S2, athletes from all groups followed a similar training program for 3 weeks. The only factor that differentiated the training protocols between groups was the exposure of the IHT group to normobaric hypoxia (FiO2 = 16.5%, ~2000 m) in a hypoxic chamber (AirZone 40, Air Sport, Poland). The participants from the LH-TL and N groups followed the same training routine as the IHT group but under normoxic conditions. In addition, in the LH-TL group, participants spent 11–12 h a day (evenings and nights) under normobaric hypoxia (FiO2 = 16.5%) in a hypoxic training center (Air Zone, Warsaw, Poland).

The training program included three microcycles (3 weeks) with progressive training loads. All the groups followed the same training routines with individually adjusted intensity zones (Table 1). Each training session in the laboratory (T1,T2,T3; three times per week) included a 15 min warm-up, 30 to 40 min main part, and 15 min cool-down. Intensity during these sessions was adjusted individually to each study participant based on the LT workload determined under normoxia (WRLT; LH-TL, N groups) or under hypoxia (WRLThyp; IHT group). The warm-up during all laboratory sessions was performed using the intensity at the level of 65–70% WRLT/WRLThyp. In the main part, the intensity was increased to 100% WRLT/WRLThyp. This level of intensity was maintained for 30 min (first week), 35 min (second week), and 40 min (third week). The cool-down included 15 min of continuous exercise with an intensity of 65–70% WRLT/WRLThyp. After completion of the final part of the laboratory session, cyclists performed a two-hour ride under normoxic conditions at an intensity of 60–75% WRLT.

2.4. Measurements during the Experiment

2.5. Diets during the Experiment

Throughout the experiment, all athletes lived at the same accommodation and followed the same training schedule, sleeping time, and diet. During the experiments, the participants consumed a controlled mixed diet (50% CHO, 20% Fat, 30% Pro; Table 2). Daily energy intake was set at ~3500 kcal. Athletes did not take any nutrition supplements.

The data were analyzed using StatSoft Statistica 13.3 software. The results were presented as arithmetic means (x) ±standard deviations (SD). The statistical significance was set at p < 0.05. Prior to all statistical analyses, the normality of the distribution of variables was checked using the Shapiro–Wilk test. The paired samples t-test was used to determine the significance of differences in lipid profile before and after training within groups. Comparison between groups was performed using analysis of covariance (ANCOVA), and the baseline levels of the dependent variables were used as covariates. The post-hoc Tukey test was used for significant differences. Effect sizes (ESs) were calculated from standardized differences (Cohen’s d values). Threshold values for Cohen ES statistics were considered to be small (0.20–0.60), moderate (0.60–1.20), large (1.20–2.0), very large (2.0–4.0), or extremely large (>4.0) [50].

Our findings indicate that the effectiveness of the hypoxic stimulus is closely related to the training method using the hypoxic environment, which determines the duration of exposure of the human body to hypoxia. Our results provide evidence of the beneficial effects of hypoxia rather than just exercise or diet on the lipid profile in trained individuals. The most beneficial changes in lipid profile were observed in the LH-TL group, which was passively exposed to hypoxia for the longest time (11 to 12 h a day for 3 weeks). Similar training with a controlled mixed diet in the control and IHT groups did not induce similar adaptations. Based on the results of this study, it can also be concluded that the magnitude of changes in the lipid profile after the hypoxic intervention will be greater in athletes with a disturbed lipid profile.

The study was conducted according to the guidelines of the Declaration of Helsinki and approved by the Bioethics Committee of the Medical University of Bialystok, Poland (No. R-I-002/325/2019). 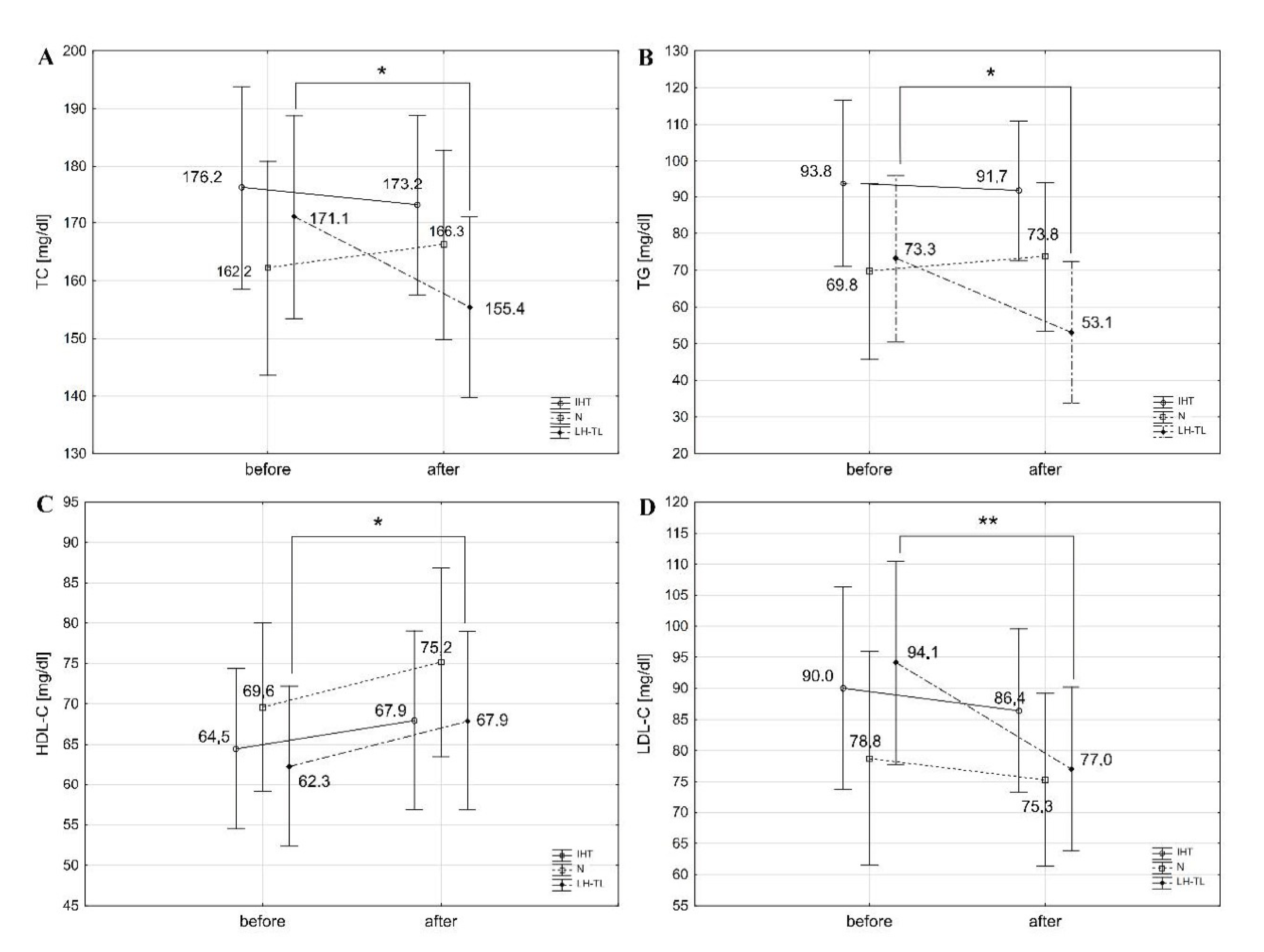