Evidence on the role of supper timing in the development of cardiovascular disease (CVD) is limited. In this study, we examined the associations between supper timing and risks of mortality from stroke, coronary heart disease (CHD), and total CVD. A total of 28,625 males and 43,213 females, aged 40 to 79 years, free from CVD and cancers at baseline were involved in this study. Participants were divided into three groups: the early supper group (before 8:00 p.m.), the irregular supper group (time irregular), and the late supper group (after 8:00 p.m.). Cox proportional hazards regression models were used to calculate hazard ratios (HRs) for stroke, CHD, and total CVD according to the supper time groups. During the 19-year follow-up, we identified 4706 deaths from total CVD. Compared with the early supper group, the multivariable HR of hemorrhagic stroke mortality for the irregular supper group was 1.44 (95% confidence interval [CI]: 1.05–1.97). There was no significant association between supper timing and the risk of mortality from other types of stroke, CHD, and CVD. We found that adopting an irregular supper timing compared with having dinner before 8:00 p.m. was associated with an increased risk of hemorrhagic stroke mortality.
Keywords: cohort study; supper time; chrono-nutrition; stroke; stroke type; cardiovascular disease cohort study; supper time; chrono-nutrition; stroke; stroke type; cardiovascular disease

Cardiovascular disease (CVD) is one of the main causes of premature death worldwide [1] and one of the leading causes of death in Japan from 1990 to 2015 [2]. Irregular eating patterns may have potential adverse effects on cardiometabolic health, obesity, insulin resistance, inflammation, lipid profile, and blood pressure [3,4]. Varied meal timing between weekdays and weekends was reported to be positively associated with BMI in a cross-sectional study that included 1106 students in Spain and Mexico aged 18–25 years [5]. A 16-year follow-up cohort study of 26,902 American males aged 45–82 years found an association between late-night eating and an increased risk of coronary heart disease (CHD) [6]. However, epidemiological data on the association between supper timing and the risk of cardiovascular disease are very limited.
We, therefore, aimed to investigate the association between supper timing and risks of mortality for stroke, CHD, and CVD in middle-aged or older Japanese using a long-term prospective cohort study.

The Japan Collaborative Cohort Study (JACC study), which involved 110,585 subjects (46,395 males and 64,190 females) aged 40–79 years from 45 communities all over Japan, was started in 1988–1990, supported by the Ministry of Education and Science. With informed consent from participants or community leaders, self-administered questionnaires about medical histories and lifestyles were completed by the participants. Details of the JACC study have been described previously [7]. Among all the subjects, 104,735 (43,821 males and 60,914 females) had no history of stroke, CHD, or cancer at baseline. Those who lived in regions where the questionnaire did not include the questions about supper time (n = 20,824), those who did not respond to those questions (n = 3754), and night/shift workers at baseline (n = 8320) were excluded. Accordingly, 71,838 subjects (28,625 males and 43,213 females) were included in this study (Figure 1).

We used a food-frequency questionnaire (FFQ) [8] containing food and drink intake during the past year without specifying the portion size. There were five possible responses for 33 items: “rarely, 1–2 times/month, 1–2 times/week, 3–4 times/week, and almost every day”, four frequency categories for current alcohol consumers: “<once/week, 1–2 times/week, 3–4 times/week, and ≥5 times/week,” and five frequency categories for tea, green tea, oolong tea, and coffee: “rarely or never, 1–2 cups/month, 1–2 cups/week, 3–4 cups/week, and almost daily (number/day)”. For rice, the categories were: “number of cups/day” and for miso soup: “daily (number/day), every other day, several times a month, and never”. Total energy and nutrient intake were estimated according to the fifth revised edition of the Japan Food Table [9].
The participants were asked the following questions regarding their usual supper timing: 1. “Do you usually eat supper from 5:00 p.m. to 8:00 p.m.? 1. Yes, 2. No”, and those who reported “No” were asked to choose one answer among the following “1. At an irregular time, 2. Always before 5:00 p.m., or 3. Always after 8:00 p.m.”. The participants were divided into three groups according to their responses to the questions about supper timing: the early supper group (those who always eat supper before 8:00 p.m.): including those who chose “yes” and those who chose “no” and “always before 5:00 p.m.”; the irregular supper group (those who eat supper irregularly): those who chose “no” and “at an irregular time”; the late supper group (those who usually eat supper after 8:00 p.m.): those who chose “no” and “always after 8:00 p.m.”. Those who always had supper before 5:00 p.m. and from 5:00 p.m. and 8:00 p.m. were combined as one group, for only 261 subjects (102 males and 159 females) always ate before 5:00 p.m.

All mortality data were collected by the public health center of the residential area and sent to the Ministry of Health and Welfare, and the causes of death were coded according to the International Classification of Diseases, 10th Revision. Registration of death is required by the Family Registration Law in Japan. Therefore, all deaths that occurred in the cohort were ascertained by death certificates, except for those who died after moving out from their original communities and were treated as censored cases [10]. Cause-specific mortality was coded individually for stroke (I60-I62, I63-I64, I690-I691, I693-I694), hemorrhagic stroke (I60-I62, I690-I692), cerebral infarction (I63, I693), CHD (I20-I25), and total CVD (I01-I99).

Statistical analyses were based on the mortality of each outcome during the follow-up period from 1988–1990 to the end of 2009 (follow-up in 4/45, 4/45, and 2/45 of the areas were ended in 1999, 2003, and 2008). Person-years of follow-up were calculated from the baseline questionnaire (1988–1990) to whichever happened first among the following: time of death, moving out from the original area, and the end of the follow-up.
The age-adjusted p-values for the difference in mean values and proportions of characteristics, as well as known risk factors of CVD, were estimated according to supper timing by linear regression for continuous variables and logistic regression for categorical variables. Using the early supper group as the reference category, we estimated age and sex-adjusted HRs and 95% CIs for death from all endpoints through Cox proportional analysis. Then we adjusted further for the history of hypertension and diabetes (yes or no), smoking status (never-smoker, ex-smoker, current smoker consuming 1–19 cigarettes/day, and current smoker consuming ≥20 cigarettes/day), alcohol intake (non-drinker, ex-drinker, current drinker consuming 0.1–11.4 g ethanol/day, 11.5–22.9 g ethanol/day, 23.0–45.9 g ethanol/day, 46.0–68.9 g ethanol/day, and ≥69.0 g ethanol/day), BMI (sex-specific quintiles), hours of walking (rarely or never, <30 min/day, 30–59 min/day, and ≥1 h/day), hours of sports (rarely or never, 1–2 h/week, 3–4 h/week, and ≥5 h/week), hours of sleeping (<6 h/day, 6–7.9 h/day, 8–8.9 h/day, and ≥9 h/day), educational status (<13 years, 13–15 years, 16–18 years, and ≥19 years), perceived mental stress (low, moderate, and high), marital status (married, single, widowed, and divorced) and work schedule (most are day shifts, most are night shifts, and time varied). The third model was further adjusted for food and nutrients: skipping breakfast (yes or no), fresh fish intake (rarely or never, 1–2 times/month, 1–2 times/week, 3–4 times/week, and almost every day), sex-specific quintiles of fruits, vegetables, total energy, sodium, and saturated fatty acids intakes on all endpoints. The selected covariates were the conventional risk factors of CVD and dietary factors that had been shown associated with CVD based on previous reports from the JACC study. The Spearman correlation coefficient between any two variables was <0.70, suggesting that multicollinearity was unlikely. The variables were obtained from the self-administered questionnaires, and some were regrouped or calculated according to the classification criteria. When values of categorical variables were missing, they were treated as a separate category in the models. We tested statistical interactions for skipping breakfast by adding a cross-product term for supper timing (1, 2, and 3) and skipping breakfast (0 and 1) to the model. We conducted stratified analyses by skipping breakfast, BMI ≥ 25 kg/m2, and detailed BMI groups (0 < BMI < 18.5 kg/m2, 18.5 kg/m2 ≤ BMI < 23 kg/m2, 23 kg/m2 ≤ BMI < 25 kg/m2, and BMI ≥ 25 kg/m2), and tested the statistical significance for a cross-product term of supper timing and each variable stratifying factor. All p-values reported are two-sided, and statistical significance was set at p < 0.05. All analyses were performed using SAS version 9.4.

Informed consent was obtained from participants involved in the study or their community leaders.

We thank all the staff members involved in this study for their valuable help in conducting the baseline survey and follow-up. All members of the JACC Study Group can be found at https://publichealth.med.hokudai.ac.jp/jacc/index.html (accessed on 11 August 2021). 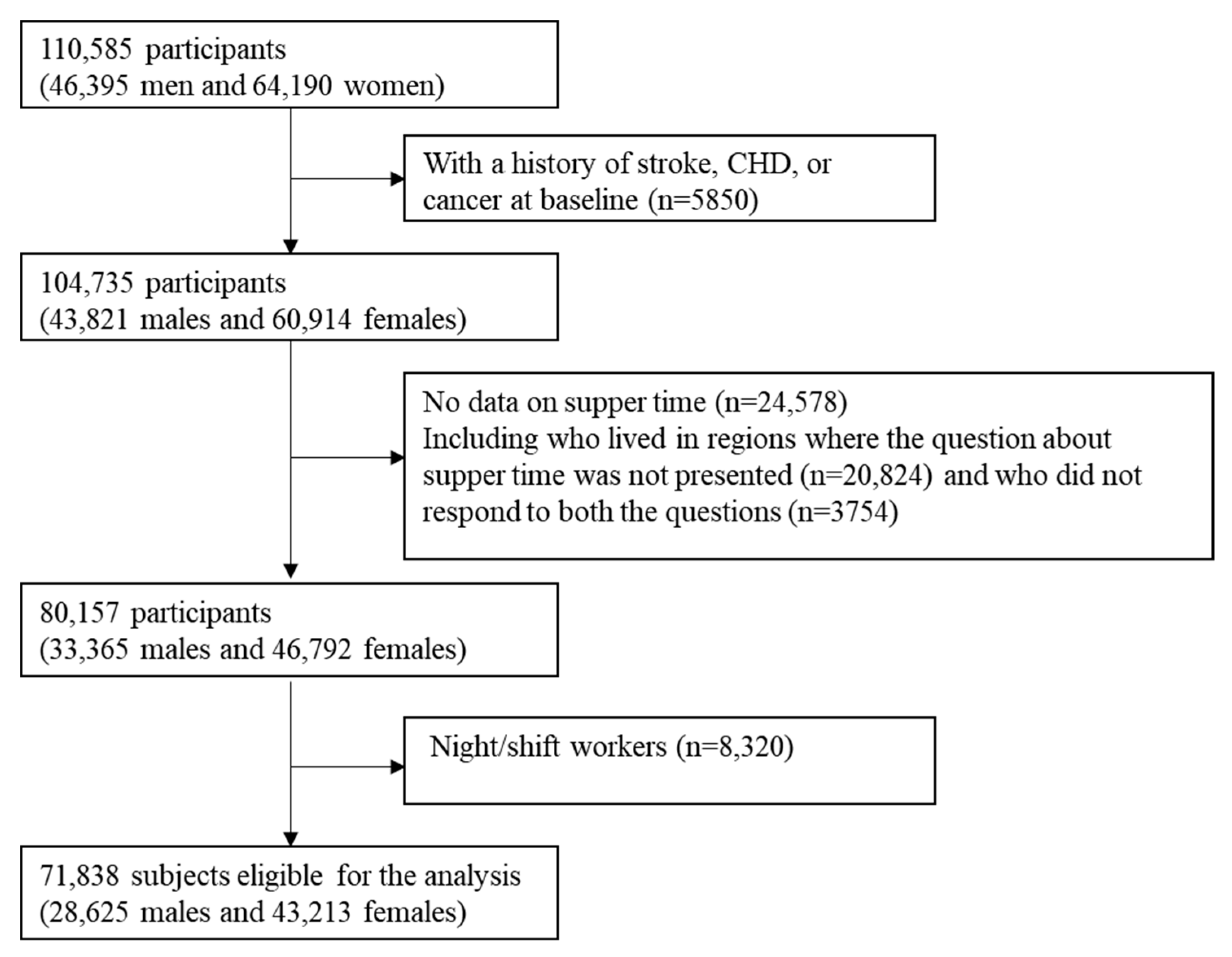