Plasma Lithium Levels in the General Population: A Cross-Sectional Analysis of Metabolic and Dietary Correlates
Next Article in Special Issue

The Impact of COVID-19 on Health Behavior, Stress, Financial and Food Security among Middle to High Income Canadian Families with Young Children

Vitamin D Insufficiency and Deficiency and Mortality from Respiratory Diseases in a Cohort of Older Adults: Potential for Limiting the Death Toll during and beyond the COVID-19 Pandemic?

The Corona Virus Disease 2019 (COVID-19) pandemic goes along with strongly increased respiratory disease mortality. It has been suggested that vitamin D3 supplementation could be a potentially promising and safe approach to reduce risk of COVID-19 infections and deaths [1]. Meta-analyses of randomized clinical trials (RCTs) have shown that vitamin D3 supplementation reduces the risk of acute respiratory tract infections [2]. Risk reduction with regular (daily or weekly) supplementation of physiological doses of vitamin D was especially strong (by 70%) among people with vitamin D deficiency, but significant risk reduction (by 25%) was also found among people with higher vitamin D levels. Meta-analyses of clinical trials have demonstrated that vitamin D3 supplementation has the potential to also reduce cancer mortality by approximately 13% [3].
People with pre-existing major diseases, such as diabetes or cancer, are at increased risk of dying from severe acute respiratory syndrome coronavirus 2 (SARS-CoV-2) infections. At the same time, prevention of and care for these diseases have been and keep being strongly compromised by current measures to limit the COVID-19 pandemic. We previously assessed the prevalence of vitamin D insufficiency and deficiency and their association with all-cause mortality and mortality from cardiovascular, cancer and respiratory diseases during a mean follow-up of 9.5 years in a cohort of 9548 adults aged 50–75 years from Saarland, Germany [4,5,6,7,8]. In our previous analysis, the number of deaths from respiratory disease had still been rather small (n = 55). We aim to present considerably updated and sex-specific follow-up data of 15 years here and to calculate the proportion of respiratory disease mortality that is attributable to vitamin D insufficiency and deficiency. Furthermore, we discuss potential implications for prevention in the context of the ongoing COVID-19 pandemic.

This investigation is based on the ESTHER study (German name: Epidemiologische Studie der Verhütung, Früherkennung und optimierten Therapie chronischer Erkrankungen in der älteren Bevölkerung), an ongoing statewide cohort study from Saarland, Germany, details of which have been reported elsewhere [4,5,6,7,8,9]. Briefly, 9940 men and women, aged 50–75 years at baseline, were recruited by their general practitioners during a routine health check-up between 2000 and 2002. Blood samples were taken at baseline at the general practitioners’ offices. Information on socio-demographic and lifestyle characteristics and medical history were obtained by questionnaires from participants and their general practitioners, and the distribution of those characteristics was similar to the distribution in the respective age categories in the German National Health Survey conducted in a representative sample of the German population in 1998 [9]. The ESTHER study was approved by the ethics committees of the University of Heidelberg and the state medical board of Saarland, Germany. Written informed consent was issued by all participants.

Information on socio-demographic characteristics, lifestyle and diet were obtained by a comprehensive self-administered questionnaire from the study participants at baseline. Skin colour, race or ethnicity were not individually recorded. However, we assume that close to 100% of this German cohort of adults aged 50 years and older has white skin colour since 99% gave the information that they were born in Germany (94%) or another European country (5%). Height and weight were assessed and documented on a standardized form by the general practitioners during the health check-up. Furthermore, blood and urine samples were taken during the health check-up, centrifuged, sent to the study center and stored at −80 °C until analysis.
The most abundant and stable vitamin D metabolite in blood samples, 25-hydroxyvitamin D (25(OH)D) levels, was measured from stored serum samples taken at recruitment. The laboratory methods used are described in detail elsewhere [4]. In brief, 25(OH)D levels in women were measured with the Diasorin-Liaison analyzer (Diasorin Inc., Stillwater, OK, USA). Analyses in men were conducted in the context of a separate research project several years later (when the Diasorin measurements were no longer offered) with IDS-iSYS (Immunodiagnostic Systems GmbH, Frankfurt Main, Germany). Both immunoassays were standardized retrospectively to the gold standard method liquid chromatography tandem-mass-spectrometry.
Deaths until end of 2016 were identified by inquiry at the residents’ registration offices and death certificates of deceased study participants were provided by local health authorities. The leading cause of death with an ICD-10 code was available for 98.9% of deceased study participants and was coded with ICD-10 codes R98-R99 “unknown cause of death” for 4.4% of deceased participants. These individuals were not excluded and censored at the time of death for cause-specific mortality outcomes.

Participants of the ESTHER baseline examination (n = 9940) were excluded from this investigation if no blood sample was available or 25(OH)D could not be measured (n = 368) or if they could not be followed-up for mortality (n = 24), which resulted in a total sample size of n = 9548 subjects for this analysis.
We used the Institute of Medicine’s cut-offs to define adequate vitamin D status (>50 nmol/L), vitamin D insufficiency (30–50 nmol/L) and vitamin D deficiency (<30 nmol/L) [10]. We assessed prevalence of vitamin D insufficiency and deficiency and the distribution (median, interquartile range) of 25(OH)D values in the total study population and according to age, sex, lifestyle factors and major diseases. We provide Kaplan-Meier curves for mortality from respiratory diseases among participants with sufficient vitamin D status, vitamin D insufficiency and deficiency and conducted log-rank tests with comparison to the reference group “sufficient vitamin D status.” In addition, dose–response relationships between 25(OH)D levels and respiratory disease mortality were estimated by restricted cubic splines [11].
Furthermore, we compared all-cause, cardiovascular disease, cancer, and respiratory disease mortality between subjects with vitamin D insufficiency or deficiency and subjects with adequate 25(OH)D levels and estimated hazard ratios (HR) with 95% confidence intervals (95% CI) by multivariable Cox proportional hazards models. Missing values for covariates ranged from 0% to 5.8% (for fish consumption). Missing covariate values were imputed with multiple imputation using the Markov Chain Monte Carlo (MCMC) method with 200 burn-in iterations. Twenty data sets were generated. The imputation model consisted of all variables of the full model (modelled as used in the full model) but not the outcome data, and the imputation was carried out stratified by sex.
We used an age, sex and season adjusted model and a full model that was adjusted for potential confounders, which are listed in Table 1. Additional adjustment for potential intermediates (cardiovascular disease, history of cancer, diabetes mellitus, hypertension, asthma, total serum cholesterol and serum C-reactive protein levels) did not lead to substantially different results (data not shown). Age and body mass index (BMI) were modelled as continuous variables and all other variables were modelled with the categories shown in Table 1.
Furthermore, sex-specific analyses were performed and statistical tests on interaction were carried out. Finally, we estimated the population attributable fraction (PAF) of respiratory disease mortality from the prevalence of vitamin D insufficiency and deficiency and their associations with respiratory disease mortality, as derived from the full model. The PAF of mortality is the share of mortality in a population that is statistically attributable to a risk factor and that could be avoided by entirely eliminating that risk factor (here: vitamin D insufficiency or deficiency) [12].
All statistical tests were two-sided, and the alpha level of significance was set to 0.05, with no adjustment for multiple testing. All statistical analyses were conducted with the software package SAS, Version 9.4 (Cary, NC, USA).

In conclusion, our results, along with evidence from meta-analyses from RCTs regarding results of vitamin D3 supplementation on various outcomes, suggest that vitamin D3 supplementation could contribute to lowering mortality from respiratory and other diseases during and beyond the COVID-19 pandemic, in particular among women. The Endocrine Society recommends 1500–2000 IU vitamin D3/day for adults of any age at high risk for vitamin D deficiency [31]. The costs for such supplementation are in the order of 30 € per person per year, or even half that amount when sufficient vitamin D supply is ensured by carefully dosed sun exposure during the summer months. Along with expected savings from prevented respiratory and other diseases, this would make vitamin D3 supplementation a particularly cost-effective and most likely cost-saving measure, whose currently still widely neglected potential should receive increased attention in the debate on how to fight against the COVID-19 pandemic. 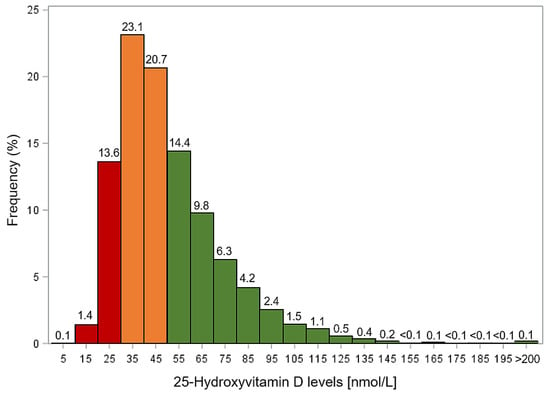 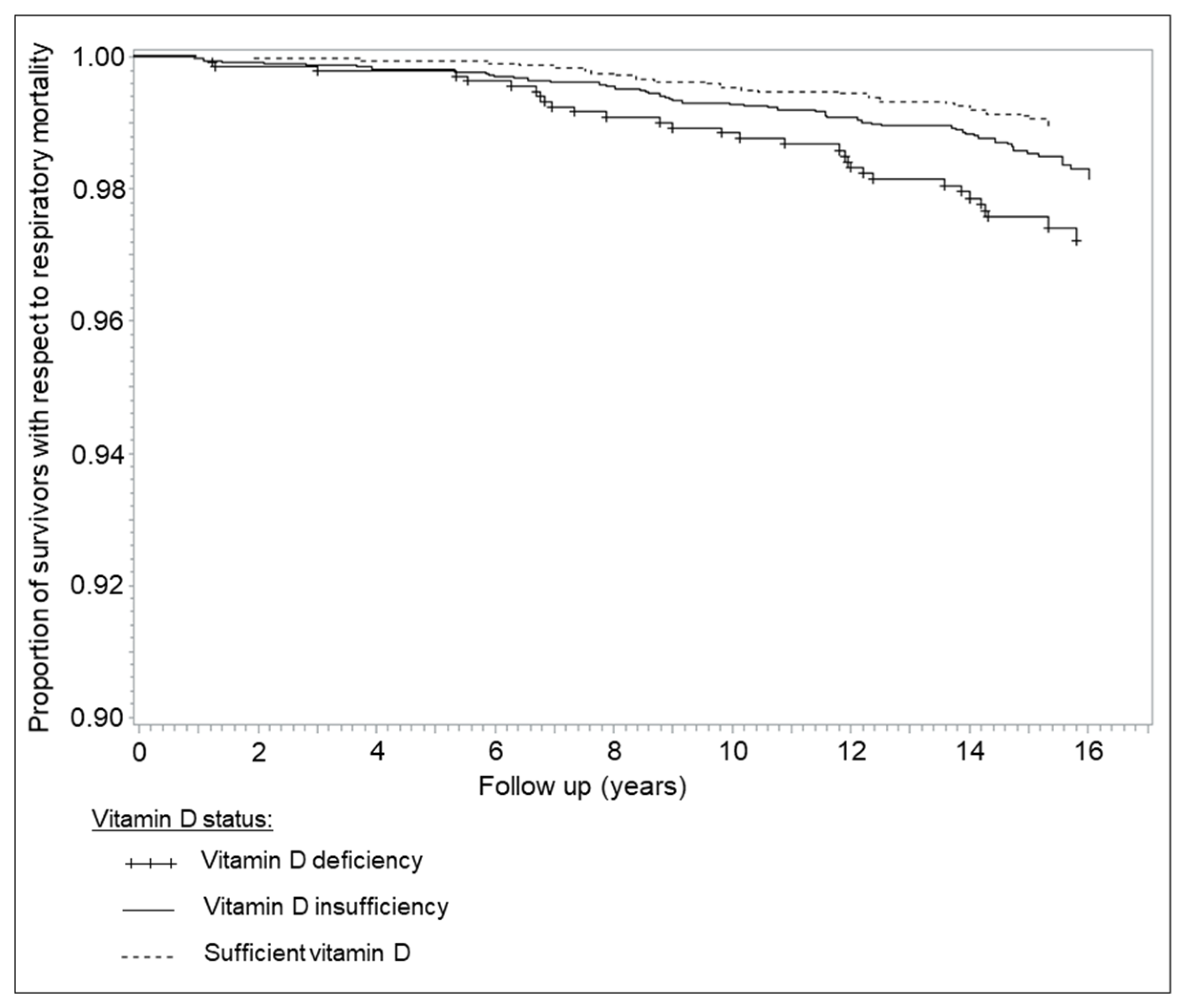