The Effect of Dietary Inorganic Nitrate Supplementation on Cardiac Function during Submaximal Exercise in Men with Heart Failure with Reduced Ejection Fraction (HFrEF): A Pilot Study

Heart failure with reduced ejection fraction (HFrEF) is a common end point for patients with coronary artery disease and it is characterized by exercise intolerance due, in part, to a reduction in cardiac output. Nitric oxide (NO) plays a vital role in cardiac function and patients with HFrEF have been identified as having reduced vascular NO. This pilot study aimed to investigate if nitrate supplementation could improve cardiac measures during acute, submaximal exercise. Five male participants (61 ± 3 years) with HFrEF (EF 32 ± 2.2%) completed this pilot study. All participants supplemented with inorganic nitrate (beetroot juice) or a nitrate-depleted placebo for ~13 days prior to testing. Participants completed a three-stage submaximal exercise protocol on a recumbent cycle ergometer with simultaneous echocardiography for calculation of cardiac output (Q), stroke volume (SV), and total peripheral resistance (TPR). Heart rate and blood pressure were measured at rest and during each stage. Both plasma nitrate (mean = ~1028%, p = 0.004) and nitrite (mean = ~109%, p = 0.01) increased following supplementation. There were no differences between interventions at rest, but the percent change in SV and Q from rest to stage two and stage three of exercise was higher following nitrate supplementation (all p > 0.05, ES > 0.8). Both interventions showed decreases in TPR during exercise, but the percent reduction TPR in stages two and three was greater following nitrate supplementation (p = 0.09, ES = 0.98 and p = 0.14, ES = 0.82, respectively). There were clinically relevant increases in cardiac function during exercise following supplementation with nitrate. The findings from this pilot study warrant further investigation in larger clinical trials. View Full-Text
Keywords: nitric oxide; cardiovascular disease; heart failure; cardiac performance nitric oxide; cardiovascular disease; heart failure; cardiac performance
►▼ Show Figures 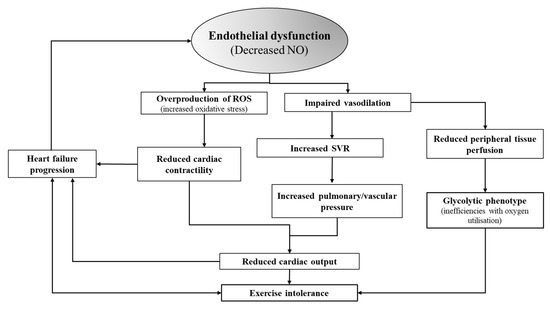