Abscisic Acid: A Conserved Hormone in Plants and Humans and a Promising Aid to Combat Prediabetes and the Metabolic Syndrome
Previous Article in Journal

Dietary Supplements for Male Infertility: A Critical Evaluation of Their Composition

Diabetes mellitus-related morbidity and mortality is a rapidly growing healthcare problem, globally. Several nutraceuticals exhibit potency to target the pathogenesis of diabetes mellitus. The antidiabetic effects of compounds of garlic have been extensively studied, however, limited data are available on the biological effects of a certain garlic component, allithiamine. In this study, allithiamine was tested using human umbilical cord vein endothelial cells (HUVECs) as a hyperglycaemic model. HUVECs were isolated by enzymatic digestion and characterized by flow cytometric analysis using antibodies against specific marker proteins including CD31, CD45, CD54, and CD106. The non-cytotoxic concentration of allithiamine was determined based on MTT, apoptosis, and necrosis assays. Subsequently, cells were divided into three groups: incubating with M199 medium as the control; or with 30 mMol/L glucose; or with 30 mMol/L glucose plus allithiamine. The effect of allithiamine on the levels of advanced glycation end-products (AGEs), activation of NF-κB, release of pro-inflammatory cytokines including IL-6, IL-8, and TNF-α, and H2O2-induced oxidative stress was investigated. We found that in the hyperglycaemia-induced increase in the level of AGEs, pro-inflammatory changes were significantly suppressed by allithiamine. However, allithiamine could not enhance the activity of transketolase, but it exerts a potent antioxidant effect. Collectively, our data suggest that allithiamine could alleviate the hyperglycaemia-induced endothelial dysfunction due to its potent antioxidant and anti-inflammatory effect by a mechanism unrelated to the transketolase activity. View Full-Text
Keywords: allithiamine; garlic; hyperglycaemia; advanced glycation end-products; cytokines allithiamine; garlic; hyperglycaemia; advanced glycation end-products; cytokines
►▼ Show Figures 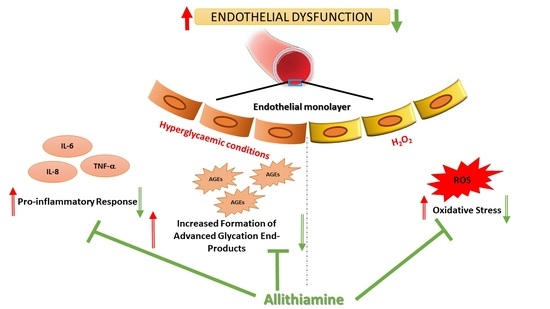