The Role and the Effect of Magnesium in Mental Disorders: A Systematic Review

Fetal Head Growth during Early to Mid-Gestation Associated with Weight Gain in Mothers with Hyperemesis Gravidarum: A Retrospective Cohort Study

The epigenetic impact of malnutrition in mothers with hyperemesis gravidarum (HG) on their offspring has not been fully elucidated. Recently, several reports have demonstrated that children born to mothers with HG were small for gestational age and had low birth weight, reduced insulin sensitivity, and neurodevelopmental delays during childhood. Therefore, we examined the relationship between fetal growth and changes in the maternal body weight in HG cases. A total of 34 patients with HG were hospitalized and delivered at term between 2009 and 2012. The records of 69 cases of pregnant women without a history of HG were extracted after matching their maternal age, parity, pregestational body mass index (BMI), gestational age, and fetal sex ratio with those of the HG group for comparison. The maternal weight gain at term was less in the HG than in the control group. There was no statistical difference in birth weight, placental weight, and ultrasonic fetometric parameters expressed in standard deviation (SD) scores, including biparietal diameter, abdominal circumference, and femur length, between the HG and the control group. Whereas fetal head growth in the HG group was positively associated with maternal weight gain at 20 weeks of gestation only, this association was not observed in the control group. We herein demonstrate that maternal weight gain from the nadir is associated with fetal head growth at mid-gestation. Thus, maternal undernutrition in the first trimester of pregnancy could affect fetal brain growth and development, leading to an increased risk of neurodevelopmental delays in later life. View Full-Text
Keywords: fetal growth; hyperemesis gravidarum; neurodevelopment fetal growth; hyperemesis gravidarum; neurodevelopment
►▼ Show Figures 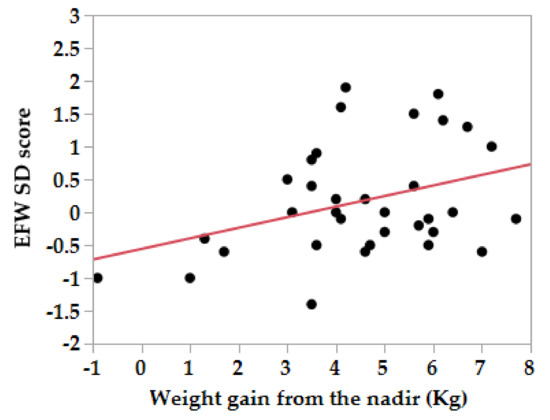