According to the latest cancer statistics, breast cancer ranks as the leading cause of mortality among women [1]. Currently, surgery, chemotherapy, hormone therapy, and radiotherapy are widely used to treat breast cancer patients [2]. Convincing evidence demonstrates that the presence of a small subpopulation cells, called breast cancer stem cells (BCSCs), play a pivotal role in breast cancer therapy resistance [3,4], metastasis, and tumor recurrence [5]. BCSCs are known to express higher levels of drug efflux transporters such as P-glycoprotein (P-gp/ABCB1) and multidrug resistance-associated protein 1 (MRP1/ABCC1) [6]. CD44, CD24, CD133, EpCAM, CD166, CD47, aldehyde dehydrogenases (ALDH), and ABCG2 have been identified as key BCSC markers [7,8,9,10]. A number of natural compounds have been reported to exert CSC inhibitory properties through targeting multiple cancer signaling pathways [8,11]. Therefore, natural compounds can be identified as new chemotherapeutic agents, with special attention focused on their efficacy to target BCSCs [12,13,14].
It has been reported that a number of intracellular signaling pathways are frequently dysregulated in BCSCs [8]. The JAK2/STAT3 signaling pathway has been reported to control BCSC survival, growth, transition, and drug resistance through promoting EMT [15,16]. JAK2 is a non-receptor tyrosine kinase that can associate with the cytoplasmic domains of several peptides, cytokines, and growth factors. The transcription factor STAT3 is involved in a number of vital biological events. Notably, the aberrant regulation of STAT3 is reported in a range of human cancers including breast cancer, making it a potential therapeutic target [17]. According to several pre-clinical investigations, activated STAT3 can play a regulatory role in breast cancer therapy resistance and tumorigenesis. It has been reported that silencing STAT3 can induce apoptosis through the inhibition of the expression of several oncogenic proteins in vitro and in vivo [18,19,20]. Considering the regulatory role of STAT3 in breast cancer drug resistance and tumorigenesis, the exploration of new STAT3 inhibitors will assist the development new STAT3-targeted anti-cancer therapies for breast cancer.
Saturated fatty acids are found in both animal and plant tissues and important as the substrates for metabolic energy, membrane biogenesis, and signaling components [21,22]. Besides being classified according to their saturation, saturated fatty acids can also be classified into two main groups depending on the number of carbon atoms: odd and even-chain fatty acids [22]. Among them, even-chain fatty acids are abundantly found in the human plasma (99%). However, a small amount of odd-chain fatty acids (OCFAs) is also detected in the human plasma. Some plants, ruminant milk fat, and fish oils are reported to contain high amounts of OCFAs: pentadecanoic acid (C15:0) and heptadecanoic acid (C17:0) [23,24]. To date, pentadecanoic acid (C15:0) and heptadecanoic acid (C17:0) have been widely utilized as internal standards in gas chromatography experiments, dairy food intake bio-markers, and bio-markers for coronary heart diseases and type II diabetes mellitus [25,26,27,28]. Interestingly, a recent study demonstrates that heptadecanoic acid (C17:0) can exert anti-cancer effects in gefitinib-resistant non-small cell lung carcinoma (NSCLC) cells, emphasizing the efficacy of OCFAs in targeting human lung cancer cells [29]. Nevertheless, investigations assessing the anti-cancer effects of odd-chain fatty acids (C15:0 and C17:0) are extremely limited, and no studies have evaluated the in vitro anti-cancer effects of pentadecanoic acid (C15:0).
In this study, we explore the anti-cancer activity of pentadecanoic acid and the underlying molecular mechanisms responsible for this activity in MCF-7/SC human breast cancer stem-like cells. We demonstrate that pentadecanoic acid suppresses the stemness and induces apoptosis through targeting the JAK2/STAT3 signaling pathway. These studies will provide experimental evidence to understand the molecular mechanisms underlying the anti-cancer effects of OCFAs and a rationale to use OCFAs in nutrition therapy for breast cancer patients.

The MTT assay was conducted as the cell viability assay in the present study. Briefly, MCF-7/SC (2000 cells/well) were seeded in 96-well plates and incubated for 24 h. Following incubation, the MCF-7/SC were exposed to different fatty acids (C15:0, C17:0, C18:1, and C18:2) for 48 h. Prior to the assay, fatty acids were dissolved in ethanol and filtered. After 48 h, cells were incubated with the MTT solution (100 μL of 1 mg/mL) for 2 h at 37 °C. One hundred and fifty microliters of dimethyl sulfoxide (DMSO) was then added to each well, and the plates were shaken for 30 min at room temperature. Absorbance was recorded at 570 nm using a micro-plate reader, and cell viability was calculated as described in our recent study [32].

MCF-7/SC (1.5 × 105 cells/well) were seeded in 6-well plates and incubated until the cells reached 95% confluency. Then, uniform scratches (width, ~1 mm) were made in the cell monolayers using a sterile pipette tip, and the cells were washed with PBS to remove detached cells, followed by culturing in RPMI-1640 with or without pentadecanoic acid. Following 48 h of incubation, wound areas were captured using an inverted phase-contrast microscope.

Trans-wells (24-well plates) were used in the cell invasion assay. Prior to the assay, the upper chambers of the trans-wells were coated with 1% Matrigel. The coated upper chambers received MCF-7/SC (1.5 × 105 per Transwell) cells supplemented with or without pentadecanoic acid, while the lower chambers received RPMI-1640 supplemented with 10% FBS. Following 48 h of incubation, 4% paraformaldehyde and methanol were used to fix cells. The fixed cells were stained (2% crystal violet) and observed under a phase-contrast microscope.

ALDH enzyme activity was determined using the ALDEFLUOR Kit (Stemcell Technologies, Vancouver, BC, Canada) according to the manufacturer’s instructions. To carry out the assay, MCF-7/SC (3 × 104 cells/mL) were seeded in cell culture dishes and incubated for 24 h. After 24 h of incubation, the cells were exposed to pentadecanoic acid (0, 50, 100, 150, or 200 μM) for 48 h and analyzed using flow cytometry. Dimethylaminobenzaldehyde (DEAB), an ALDH inhibitor, was used as the negative control.

MCF-7/SC (3 × 104 cells) were seeded in cell culture dishes and incubated for 24 h. Following 48 h of incubation, the cells were exposed to pentadecanoic acid (0, 50, 100, 150, or 200 μM) for 48 h. Apoptosis in MCF-7/SC was detected using the annexin V-FITC Apoptosis Detection Kit following the supplier’s instructions.

MCF-7/SC were exposed to different concentrations of pentadecanoic acid for 48 h. Following incubation, the cells were lysed using the radioimmunoprecipitation assay (RIPA) buffer. After quantifying the proteins in the cell lysates, they were separated using SDS-PAGE. The separated proteins were transferred to a PVDF membrane, and the membranes were blocked with skim milk, followed by incubation with different primary antibodies. Except GAPDH, the primary antibodies were diluted a thousand fold in skim milk. All the primary antibodies were purchased from Cell Signaling Technology (Beverly, MA, USA). Secondary antibodies, anti-rabbit and anti-mouse immunoglobulin G (IgG) (Vector Laboratories, Burlingame, CA, USA), were diluted five thousand fold. The BS ECL Plus Kit (Biosesang, Seongnam, South Korea) was used to develop the proteins.

Briefly, MCF-7/SC (3 × 104) were seeded in cell culture dishes and incubated for 48 h. After incubation, the cells were stained with 2′,7′-dichlorofluorescein diacetate (H2DCFDA), a fluorescent probe used to detect ROS, for 15 min. Following 15 min of incubation, the stained cells were washed with PBS and analyzed by flow cytometry.

The GraphPad Prism 7.0 software (La Jolla, CA, USA) was used for statistical analysis in the present study. The data are expressed as the mean ± SD of at least three independent experiments and statistically analyzed using the Student’s t-test. p < 0.05 (*) was considered as significant.

The FACS technique was employed to compare the expression of cell surface markers (CD44+/CD24-) in MCF-7/SC and parental MCF-7 cells. As shown in Figure 1a, MCF-7/SC displayed an enriched CD44+/CD24− cell population compared to MCF-7 cells, indicating the characteristics of cancer stem cells. We then compared the reactive oxygen species (ROS) levels in MCF-7/SC and MCF-7 cells. As shown in Figure 1b, the MCF-7/SC were found to contain lower ROS levels than the MCF-7 cells, which is a common feature of cancer stem cells [34]. Moreover, the MCF-7/SC displayed an increased ability to form mammospheres (Figure 1c). In addition, according to the results of Western blot experiments, MCF-7/SC were found to possess higher levels of cancer stem cell markers such as CD44, MRP1, and MDR1 and lower levels of CD24 compared with MCF-7 cells (Figure 1d). Furthermore, MCF-7/SC exhibited enhanced migratory potential compared to MCF-7 cells (Figure 1e). Altogether, these results clearly demonstrate that MCF-7/SC can be considered as stem-like cells that possess an enriched CSC population.

This research was funded by the National Research Foundation of Korea (NRF) grant number 2020R1A2C1004349. 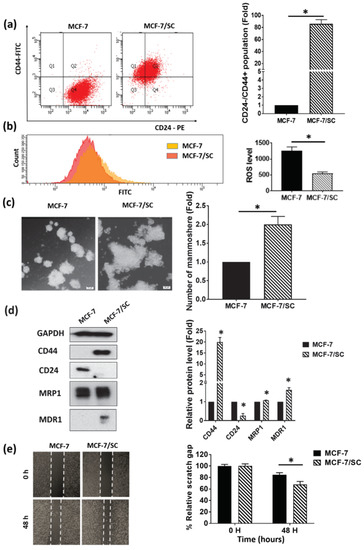 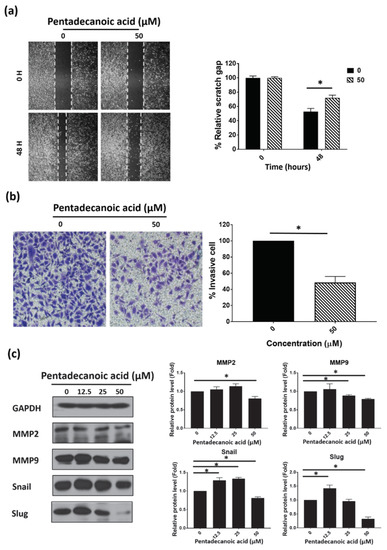 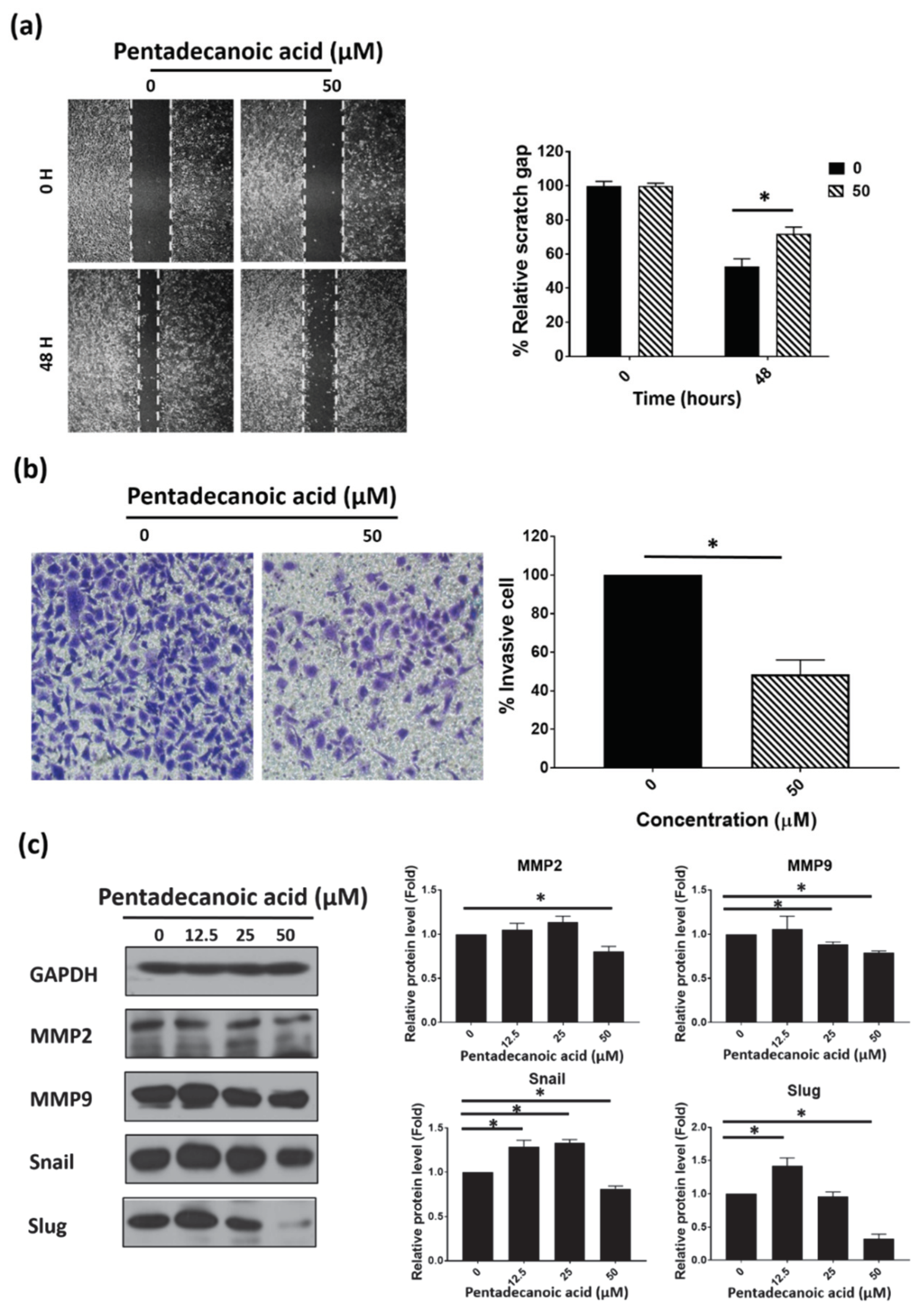 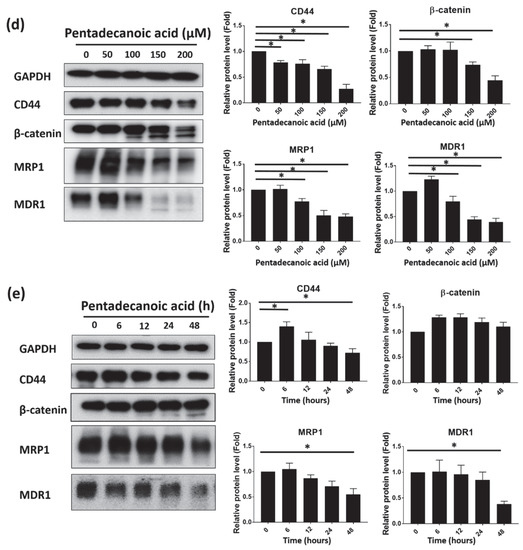 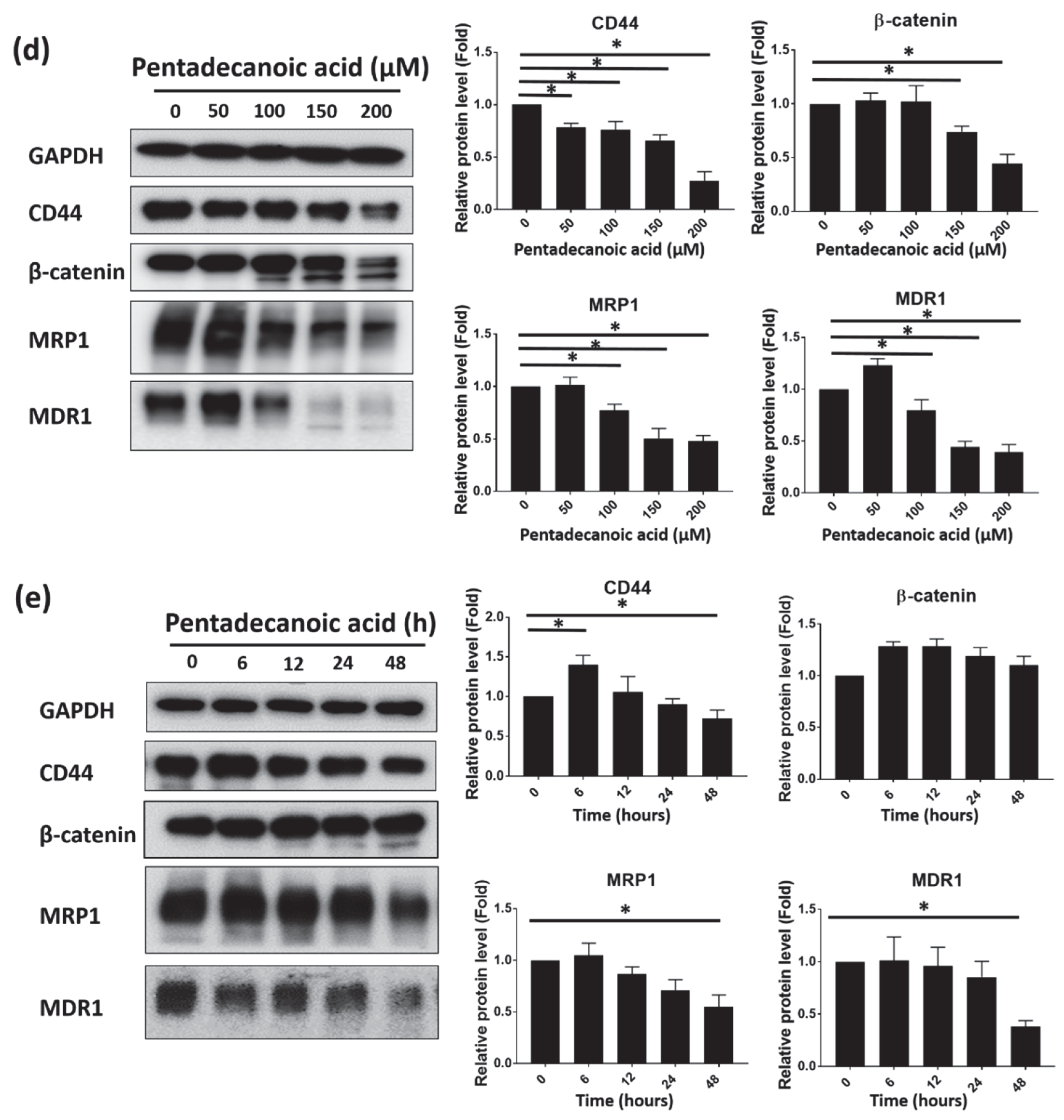 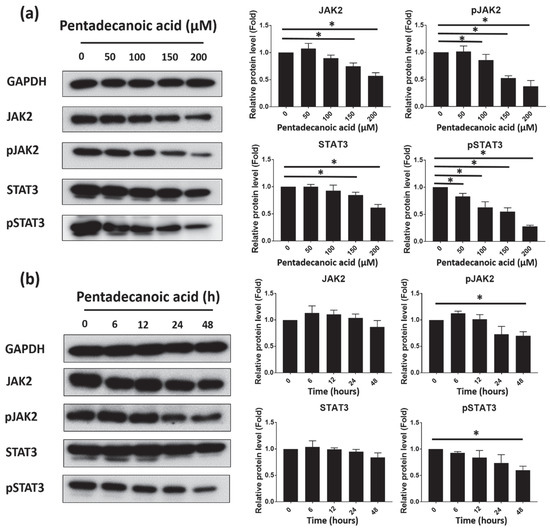 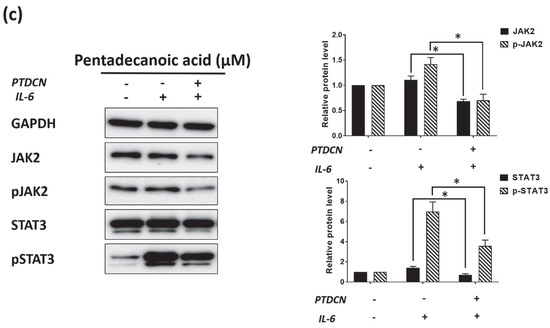 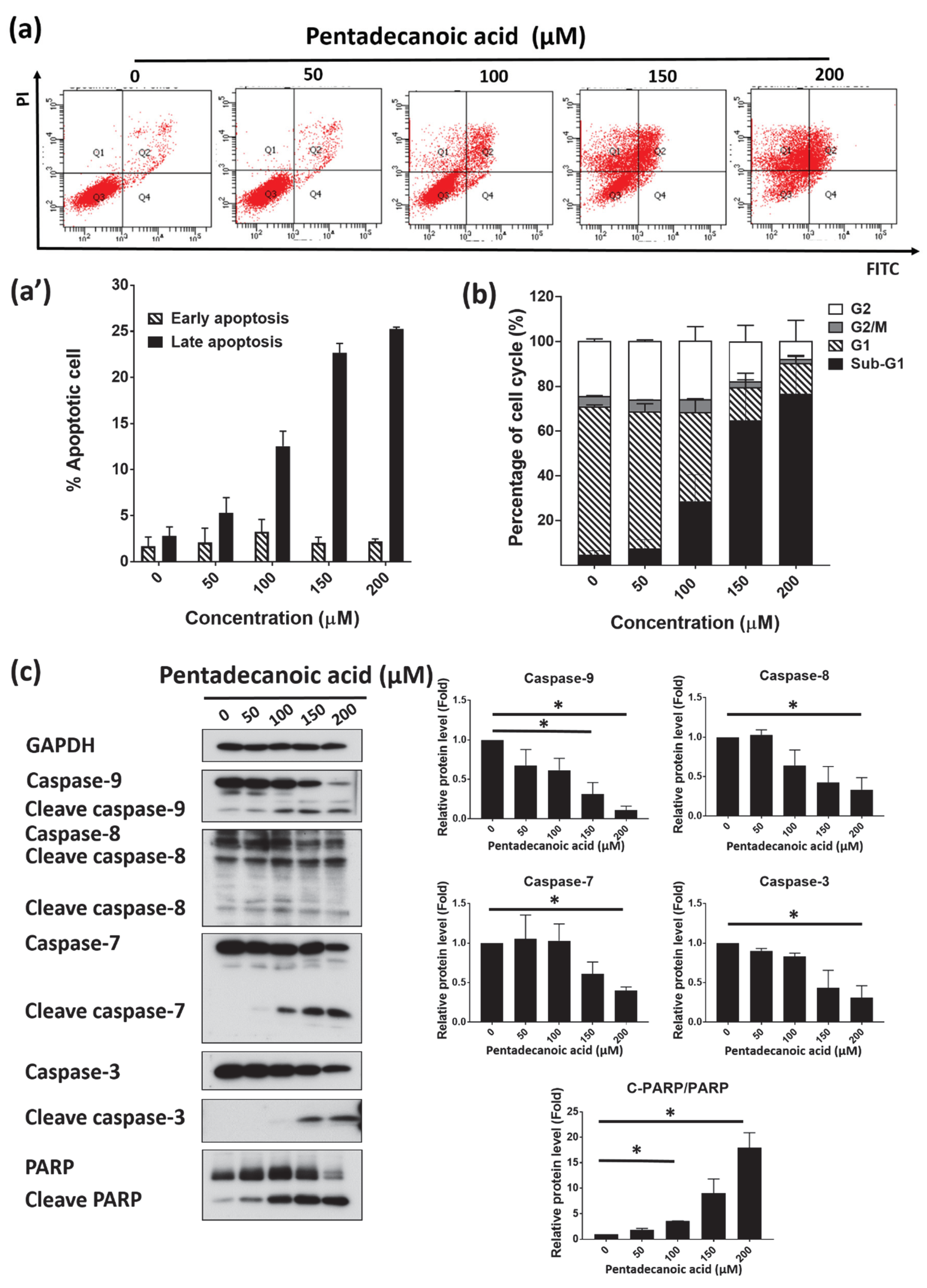