Obesity is now a major global epidemic [1]. It not only predisposes to an array of risk factors such as insulin resistance (IR) and chronic low-grade inflammation but also poses a risk to several non-communicable chronic diseases like type 2 diabetes (T2D) and cardiovascular disease [2], leading to increased morbidity and mortality amongst adults. The vascular effects of obesity may have a role in the development of a rapidly expanding disease in the elderly population, Alzheimer’s disease (AD) [3]. Although the mechanisms are not precise, the detrimental impact of obesity on cognitive function may be, at least in part, due to vascular defects like IR and chronic low-grade inflammation, impaired insulin metabolism or insulin resistance [4]. There are multiple risk factors for AD, including age, obesity, chronic inflammation, genetics and insulin resistance [3]. A prospective study of >10,000 participants examining the association between body mass index (BMI) and dementia over 36 years reported that obese participants (BMI ≥ 30) at midlife had more than 3-fold increase in the risk of developing AD compared to those with a normal weight range (18.5–25 kg/m2) [5]. Blood-based kinases such as protein kinase R and c-Jun N-terminal kinase, and in particular glycogen synthase kinase-3 (GSK-3) implicated in both IR and Tau phosphorylation and Aβ plaques, were found to be elevated in individuals with mild cognitive impairment and AD [6]. Interventions targeting such kinases in the high-risk groups might be beneficial as an early intervention to reduce the risk of T2D and AD.
Research studies on long-chain omega-3 polyunsaturated fatty acids (LCn-3PUFA), eicosapentaenoic (EPA; 20:5n-3) and docosahexaenoic acid (DHA; 22:6n-3) have previously shown neuroprotective properties [7,8]. A substantial amount of evidence is available on the effects of LCn-3PUFA, specific to DHA and EPA, over neuronal membrane properties, brain plasticity, inflammation and memory [9]. DHA is quantitatively the most important omega-3 PUFA in the brain; however, the endogenous synthesis of LCn-3PUFA is low within the brain compared with uptake from the plasma pools [10], thus suggesting that the brain maintains DHA levels via the uptake from dietary sources such as fish or LCn-3PUFA oils (fish or algae oils). At a cellular level, EPA and DHA have been shown to contribute to the modulation of gene expression and of kinases, as well as activation of signaling pathways and metabolite formation, involved in neuroprotection [11].
LCn-3PUFA may play a role in the alleviation of obesity-induced IR by promoting the adipose tissue function and maintaining its integrity [12,13]. Strong evidence from pre-clinical and ex vivo studies suggests mechanisms of EPA and DHA in ameliorating IR linked to obesity [14]. Epidemiological evidence presents an inverse association between higher levels of circulating LCn-3PUFA and the incidence of type 2 diabetes [15,16]. Cross-sectional studies [17] and a meta-analysis [18] from our research team have reported an inverse sex-dependent relationship between LCn-3PUFA, IR and type 2 diabetes, demonstrating favorable effects, only in females. These results suggest that sex may also be one of the potential confounders contributing to the inconsistent findings between LCn-3PUFA and diabetes. Interestingly, clinical trials have produced contrasting results to that of in vivo evidence from animal studies [19]. Therefore, further research is required to elucidate the role of LCn-3PUFA in ameliorating IR.
In the current study, we aimed to determine the effect of fish oil enriched with DHA as a source of LCn-3PUFA, on GSK-3 and IR in a randomized controlled trial involving overweight and obese individuals.

Participants were recruited for the ‘Do omega-3 polyunsaturated fatty acids have a gender-specific effect on insulin resistance?’ double-blind randomized controlled trial (ACTRN: 12616000287437) from the Newcastle (Callaghan, NSW, Australia) community through advertisements, local media and social media, and via the Hunter Medical Research Institute Volunteer Register. Volunteers were eligible to participate if they were aged between 18 and 70 years, had a body mass index (BMI) between 25–45 kg/m2, had a waist circumference ≥88 cm (females) or ≥102 cm (males). Participants were excluded if they were diagnosed with diabetes, were taking medications to lower blood sugar levels or to influence insulin sensitivity (e.g., Metformin), if they were pregnant or breastfeeding, were intolerant to the study products, were taking anticoagulants such as aspirin or warfarin, had a history of severe gastrointestinal or neurological disorders, consumed >2 serves of oily fish per week or reported taking fish oil supplements.

Eligible participants were randomly allocated using a computer-generated sequence to one of two groups, DHA-rich fish oil or Placebo (corn oil). Participants were asked to consume either 2 × 1 g DHA-rich fish oil capsules/day containing 430 mg DHA + 60 mg EPA or 2× placebo capsules each containing 1 g of corn oil, for a period of 12 weeks. DHA-rich fish oil and placebo capsules were manufactured and provided in kind by EPAX, Norway. The dose of DHA was based on the previous studies that showed efficacy of DHA on IR [20,21]. Participants were asked to maintain their habitual diet and usual physical activity levels for the study duration, with dietary intake (3-day food record) and physical activity (international physical activity questionnaire, IPAQ—long form questionnaire) measured at the beginning and end of the study period to ensure compliance. Compliance to the study intervention was measured using capsule log, return capsule count, and gas chromatography analysis of the fatty acid profile of erythrocyte membranes. The study was conducted in accordance to the Declaration of Helsinki and following Good Clinical Practice guidelines and had ethical approval from the University of Newcastle Human Research Ethics Committee (H-2015-0167). Written informed consent was obtained from all participants prior to enrolment in the study.

A total of seventy-two participants were recruited for the main study. Required plasma samples were available for fifty-eight participants for the analysis of the current study outcomes. For this study, n = 58 (27 allocated to placebo group and 31 allocated to DHA-rich fish oil intervention group) were analysed for GSK-3β resulting in a study power of 98.9% for the detection of a 2.3 ng/mL reduction in serum GSK-3β level (1.8 ng/mL SD, alpha value set at 0.01). A power calculation was conducted using PS power and sample size calculator (Version 3.1.2, 2014). Data were tested for normality using Shapiro–Wilk’s test and histogram, and data described as the mean ± standard deviation (SD) or median (interquartile range; IQR) as appropriate. Effect sizes are presented as the mean difference [95% Confidence Interval; 95% CI]. Changes in the outcome measures within the placebo and the intervention group across the study period were assessed using paired t-test (parametric) or Wilcoxin Sign-rank test for non-parametric data. Treatment effects were assessed using regression to assess absolute change from baseline using the placebo group as a reference and adjusting for baseline levels. Pearson’s product–moment correlations with Bonferroni correction were used to assess linear relationships between continuous variables, with between-group differences assessed using the immediate command cortesti in Stata to test the equality of two correlation coefficients in independent samples. It considers the respective correlation co-efficient (i.e., r-value) and sample size, with p < 0.05 signifying a significant difference between correlations. Multiple regression models were used to investigate effects of baseline factors (age, sex, BMI, and physical activity) on results. Subgroup analysis on effects of intervention were carried out in people with high and low baseline CRP levels. All statistical tests were two tailed, and alpha was set at p < 0.05. All statistical analyses were conducted using Stata (Version 14.2, StataCorp LLC, Lakeway, TX, USA).

A total of 58 participants (DHA-rich fish oil n = 31; placebo n = 27) were analysed for GSK3β and included in the final analyses. Baseline characteristics of participants have been summarized in Table 1. Overall the participants both males and females were predominately middle aged (51.1 ± 1.7 years), and mild to moderately obese (BMI: 31.9 ± 0.8 kg/m2; WC: 102.2 ± 2.4 cm). The median fasting insulin levels (10.1 (6.1)) of the study participants indicate hyperinsulinemia, as the normal adult fasting insulin levels are <10 mIU/L. Baseline CRP levels were positively correlated (r = 0.3513, p < 0.05) with baseline fasting insulin levels, indicating a close relationship between systemic inflammation and hyperinsulinemia. There were no significant differences between groups at the baseline (Table 1).

3.2. Compliance to the Study Products and Changes in the Participants’ Erythrocyte Membrane Fatty Acid Composition

3.5. Effect of DHA-Rich Fish Oil on the Other Biomarkers

3.6. Effect of DHA-Rich Fish Oil Over GSK-3β, Insulin and HOMA-IR in Subgroups Based on Baseline Systemic Inflammation Status

DHA-rich fish oil supplementation significantly reduced the GSK-3β levels in individuals with obesity, a key kinase that is linked to the pathogenesis of T2D and AD. This suggests that fish oil enriched in DHA may be a potential early intervention option to reduce the chances of developing metabolic disease in high-risk individuals. DHA-enriched fish oil supplementation also significantly reduced fasting insulin levels and HOMA-IR compared to placebo. LCn-3PUFA-mediated reduction in the GSK-3 levels could be a potential mechanism involved in reducing the IR. Higher levels of insulin and HOMA-IR at baseline were associated with a greater reduction in insulin and IR in the DHA-rich fish oil-receiving group over the treatment period. Further, subgroup analysis indicated a significant reduction in insulin and HOMA-IR values with high baseline systemic inflammation compared to those with lower systemic inflammation. Thus, DHA-enriched fish may be effective in reducing insulin resistance in populations with higher inflammation levels. Overall, DHA-rich fish oil supplementation may be a beneficial adjunct therapy to dietary and lifestyle advice for overweight and obese men and women to reduce the risk of associated comorbidities.

Intervention and placebo capsules were provided in kind by EPAX, Norway. This research is partly supported by Mary Castello grant from Faculty of Health and Medicine, University of Newcastle. We did not receive any specific grant from funding agencies in the public, commercial, or not-for-profit sectors.

The authors would like to gratefully acknowledge all the men and women that volunteered for the study, and the Hunter Medical Research Institute for their assistance with the HMRI volunteer register. We would also like to thank EPAX Norway for providing the intervention and placebo capsules in kind. 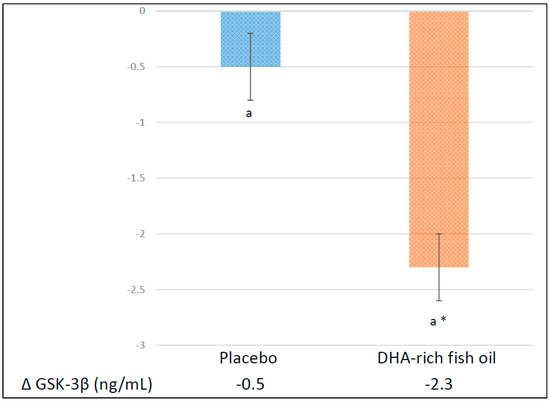 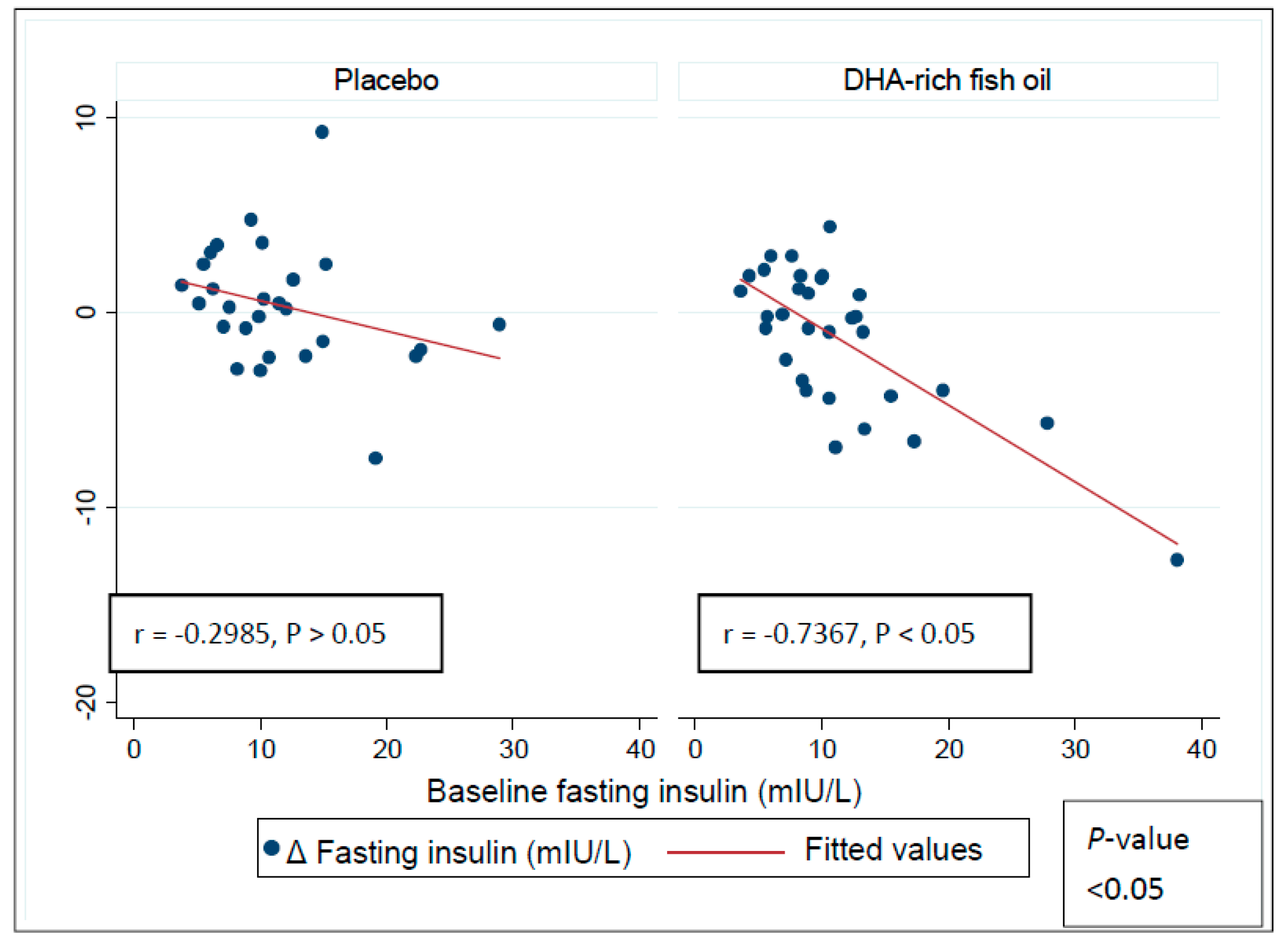