Breast Cancer Prevention-Is there a Future for Sulforaphane and Its Analogs?
Previous Article in Special Issue

Discrimination of Isointense Bitter Stimuli in a Beer Model System

Prior work suggests humans can differentiate between bitter stimuli in water. Here, we describe three experiments that test whether beer consumers can discriminate between different bitterants in beer. In Experiment 1 (n = 51), stimuli were intensity matched; Experiments 2 and 3 were a difference from control (DFC)/check-all-that-apply (CATA) test (n = 62), and an affective test (n = 81). All used a commercial non-alcoholic beer spiked with Isolone (a hop extract), quinine sulfate dihydrate, and sucrose octaacetate (SOA). In Experiment 1, participants rated intensities on general labeled magnitude scales (gLMS), which were analyzed via ANOVA. In Experiment 2, participants rated how different samples were from a reference of Isolone on a 7-point DFC scale, and endorsed 13 attributes in a CATA task. DFC data were analyzed via ANOVA with Dunnett’s test to compare differences relative to a blind reference, and CATA data were analyzed via Cochran’s Q test. In Experiment 3, liking was assessed on labeled affective magnitude scales, and samples were also ranked. Liking was analyzed via ANOVA and rankings were analyzed with a Cochran–Mantel–Haenszel test. Experiment 1 confirmed that samples were isointense. In Experiment 2, despite being isointense, both quinine (p = 0.04) and SOA (p = 0.03) were different from Isolone, but no significant effects were found for CATA descriptors (all p values > 0.16). In Experiment 3, neither liking (p = 0.16) or ranking (p = 0.49) differed. Collectively, these data confirm that individuals can discriminate perceptually distinct bitter stimuli in beer, as shown previously in water, but these differences cannot be described semantically, and they do not seem to influence hedonic assessments. View Full-Text
Keywords: bitter; beer; discrimination; difference from control; hedonic bitter; beer; discrimination; difference from control; hedonic
►▼ Show Figures 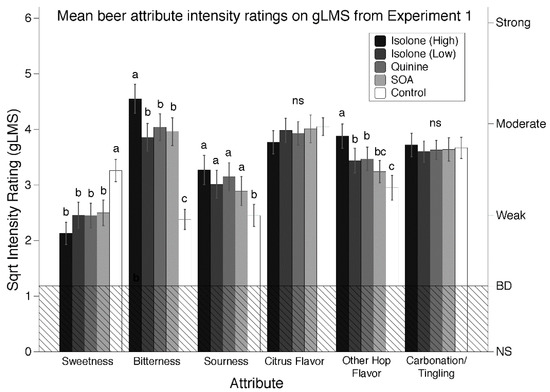