Breast Cancer Prevention-Is there a Future for Sulforaphane and Its Analogs?
Previous Article in Journal

Development of Fortified Citrus Olive Oils: From Their Production to Their Nutraceutical Properties on the Cardiovascular System

The incidence of chronic, noncommunicable diseases (NCDs) (mainly cardiovascular diseases (CVDs), cancer, chronic respiratory disease and diabetes) is increasing rapidly and is having a significant impact on society, economy and health [1,2,3,4]. Currently, 70% of deaths are caused by NCDs worldwide [1]. A major risk factor for NCDs is an unhealthy diet, including low vegetable consumption [4,5].
Multiple studies indicated a positive relation between vegetable intake and reduction of CVDs [3,6,7,8,9,10,11,12,13,14,15,16,17,18]. In a meta-analysis by Zhan et al. (2017) [18], the pooled relative risk (RR) for CVDs between highest versus lowest vegetable intake category was 0.87 (95% CI: 0.83–0.91), which indicates a decreased CVD risk with increasing vegetable intake. Associations between vegetable intake and adiposity [2,19,20,21], type 2 diabetes [2,22,23,24,25,26,27,28,29], chronic respiratory diseases [30,31] and cancer [2,8,32,33,34,35,36,37,38] are less consistent. The benefits of vegetables on prevention of NCDs can be explained by the relatively high content of micronutrients, antioxidant compounds, polyphenols and fibers in vegetables that may counteract the biochemical processes leading to onset of CVDs and other NCDs [39]. As different vegetable categories differ in nutritional composition, the associations with health outcomes may differ as well [39].
Although the health benefits of fruits and vegetables are usually studied together in most studies [1,11,13,15,16,23,25,32,34], it is recommended that the benefits of these two food groups are assessed separately. Fruits and vegetables share health benefits due to common phytochemicals (e.g., phenolics, flavonoids, carotenoids), vitamins (e.g., vitamin C, folate, pro-vitamin A), minerals (e.g., potassium, calcium, magnesium) and fibers, but bioactive compounds differ widely in composition and ratio between fruits and vegetables [40,41,42,43]. Moreover, fruits have usually a higher concentration of sugars than vegetables, while vegetables are more likely to have a higher concentration of fibers and proteins [40]. Particularly when fruit juices are included in fruit measurements, beneficial effects of fruits alone or in combination with vegetables may not become apparent due to higher intakes in sugar and energy from fruit juices [44]. In fact, studies that have separated fruit and vegetable groups have shown differences in health outcomes [6,22,24,36,38,40,45,46,47]. For instance, in a study by Villegas et al. (2008), the increased intake of specific vegetable groups was significantly inversely associated with the type 2 diabetes risk, while this association was not found for increased fruit intake in Chinese women [24].
According to World Health Organization (WHO) and Food and Agriculture Organization (FAO) guidelines (2003), the recommended consumption of fruits and vegetables is at least 400 g/day [48]. While it is generally believed that vegetable intake is inadequate in most countries [49,50,51,52], there is currently no systematic review that focuses solely on vegetable intake to confirm these assumptions. The Global Burden of Disease (GBD) Study 2010 assessed vegetable intake and concluded that the intake was generally too low to minimize the risk of chronic diseases [49,50]. However, in this study vegetable intake was combined with that of legumes and not all data included was assessed at the individual level. Hall et al. (2009) [52] concluded that low vegetable and fruit consumption is higher in low- and middle-income countries, but did not separate fruit and vegetable intake.
Therefore, the main aim of the current study is to systematically review the vegetable consumption in adult populations of 18 years and older globally and to compare these data to the existing recommendations and to vegetable supply data.

The search was conducted according to the Preferred Reporting Items for Systematic Reviews and Meta-Analyses (PRISMA) guidelines from March 2018 to June 2019 (see Supplementary Materials, Table S1) [56]. Data about vegetable intake was preferably taken from national nutrition surveys in order to extract the most representative vegetable intake data. Therefore, we first searched these surveys per country from government websites and online databases from health authorities [57,58]. The European Food Safety Authority (EFSA) Comprehensive European Food Consumption Database was used as a guide for reviewing the existing national nutrition surveys in Europe [59]. For some European countries for which the national survey reports did not report vegetable intake separately from potatoes and legumes, vegetable intake data was taken from the EFSA database. The STEPwise approach to surveillance (STEPS) database was also consulted for available vegetable intake data. STEPS is a simple, standardized method for collecting, analyzing and disseminating data regarding surveillance of NCD risk factors, with a non-itemized Food Frequency Questionnaire (FFQ) on vegetable intake. STEPS surveys are usually initiated and conducted by Ministry of Health officials in collaboration with local technical partners [4].
When for a country no nationally representative survey with relevant vegetable intake data was retrieved, a literature search in PubMed was conducted. The search string was a combination of the following terms: “dietary intake” OR “food consumption” OR “vegetable intake” OR “vegetable consumption” AND “country name”. There were no language restrictions in the overall search. Papers were screened and selected according to titles and abstracts, followed by a full-text review for final inclusion, using the following inclusion criteria:

2.4. Quality Assessment of the Data

Vegetable consumption was expressed in grams per day. Descriptive statistics were used for the analysis of vegetable intake. For six countries for which no data on vegetable consumption alone were found, we used data where vegetable and fruit intake were reported together and assumed that vegetable consumption covered 60% of the intake according to WHO/FAO recommendation about vegetable and fruit intake. When means and 95% CIs were expressed for subgroups of gender, age or ethnicity, a weighted mean and 95% CI were calculated using the mean, 95% CI and the number of participants of each group. When data were not expressed in means and 95% CIs, then data were converted using the following equations.
where = mean, a = minimum, b = maximum and m = median.

For each region, we calculated a weighted mean vegetable intake where we used the adult population of 18 years and older in 2013 as derived from United Nations Children’s Fund (UNICEF) State of the World’s Children report, 2015 [64].

The systematic search yielded initially 3247 publications (Figure 1). After abstract and title screening, 558 publications were assessed for eligibility. The final review dataset included 160 publications with studies measuring vegetable intake in 162 out of 235 countries, covering 93% of the world’s adult population. Vegetable supply data were available for 136 out of the 162 (84%) countries with vegetable intake data; for the smaller countries vegetable supply data was mostly lacking.
The surveys/studies included in this review had a high sample representativeness, with only 28 (17%) with a non-representative sample and six (4%) with no information about sample representativeness (see Supplementary Materials, Table S2). The sample size of the surveys/studies ranged from 100 subjects in Jamaica to 140,859 in China.
The most frequently used method to assess vegetable intake was a (semi-) quantitative FFQ (65%), which also includes the STEPS methodology which was used in most African, Latin American and Oceanian countries. Vegetable intake data in high-income countries were mostly from national nutrition surveys in which a combination of 24 h dietary recalls and FFQs were used (see Supplementary Materials, Table S2).

In conclusion, our review indicated that global vegetable intake is generally below the recommendations of 240 g/day and that the vegetable supply is mostly inadequate to meet the recommendations. With the current emphasis on consuming plant-based diets, efforts are needed to improve the production, accessibility and affordability of vegetables in conjunction with innovative approaches to establish a sustained behavior change aimed at improving vegetable intake worldwide.

This research was partly conducted as internship project of A.K., which was funded by Unilever. The APC was funded by Wageningen University and Research.

A.E. is employee of Unilever. The other authors do not have a conflict of interest. 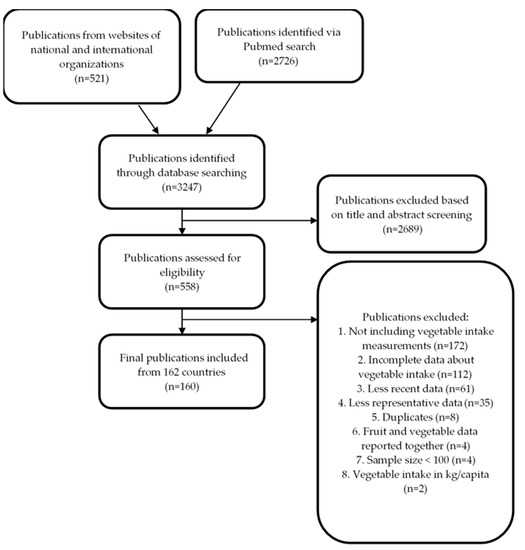 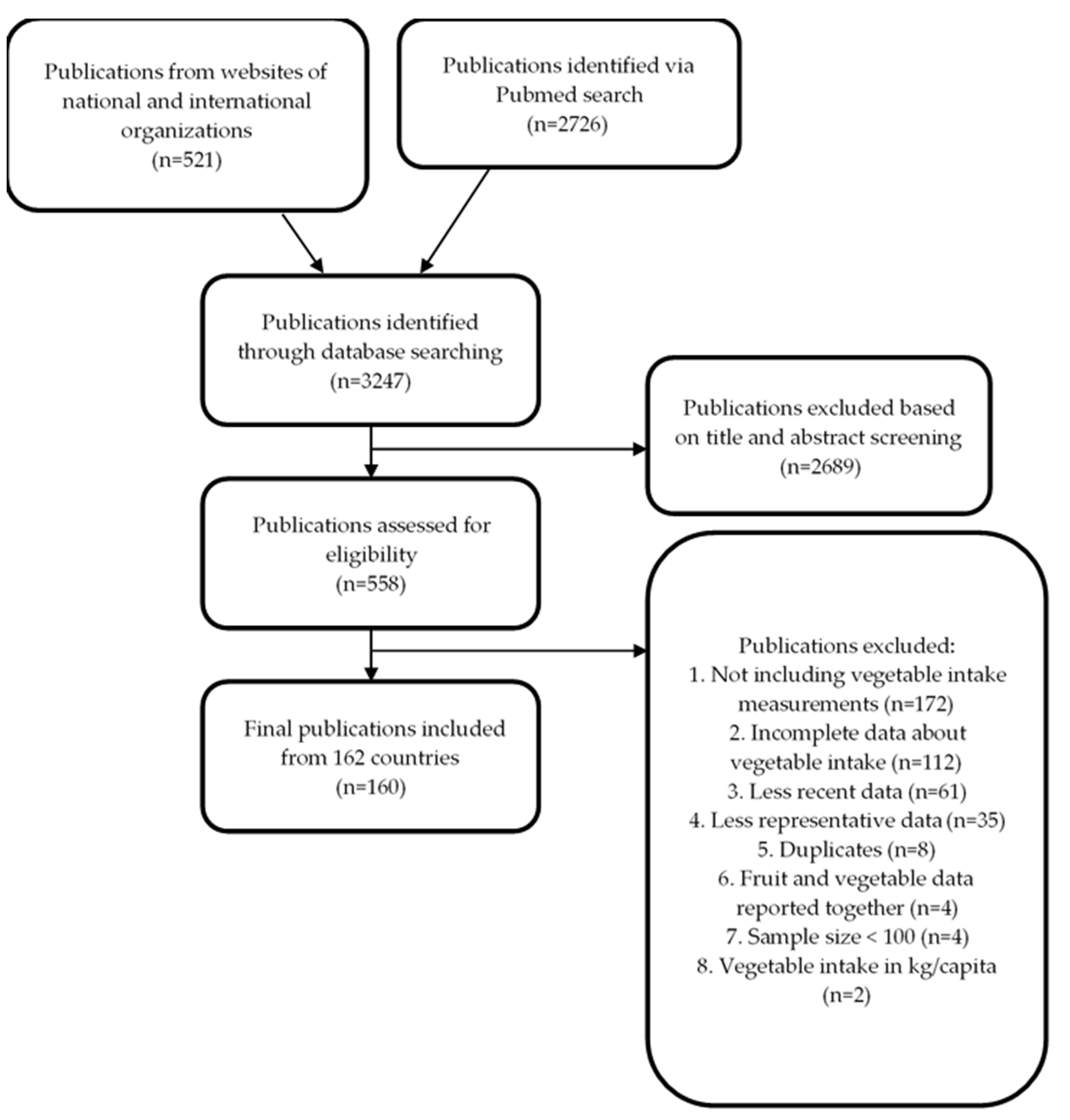 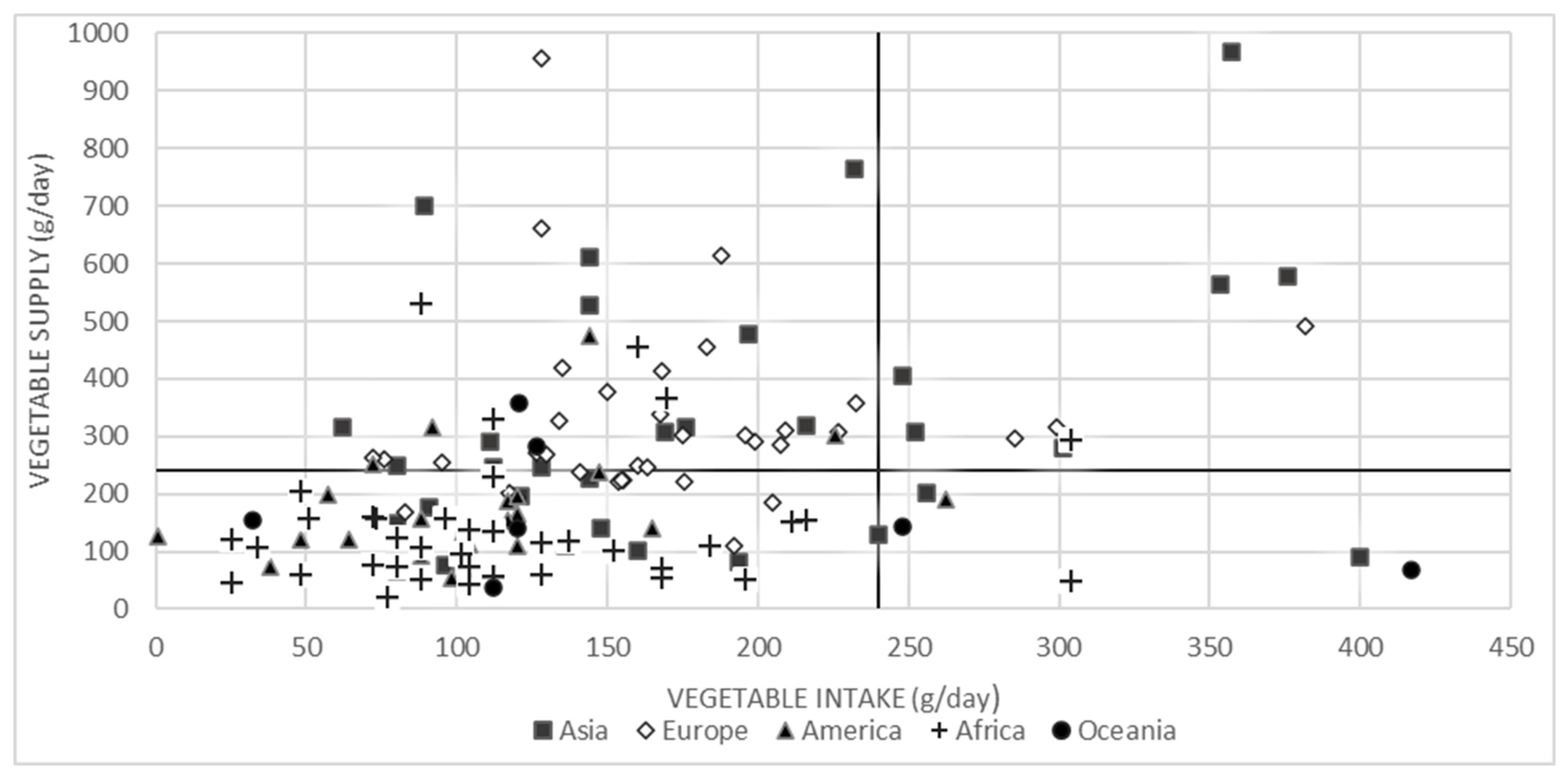