The term “vitamin” defines a trace dietary constituent required for the normal function of specific physiological processes [1]. Vitamin D is essential for the correct regulation of calcium-phosphorus homeostasis and maintenance of the musculoskeletal system [2].
Two types of vitamin D molecules exist: vitamin D3 (cholecalciferol), which is animal-derived; and the plant-derived vitamin D2 (ergocalciferol). Normally, the body is unable to metabolically synthesize vitamins but an important peculiarity of vitamin D is its photochemical production [1]. Vitamin D can be endogenously synthesized from sterol 7-dehydrocholesterol in the skin following exposure to ultraviolet B radiation (from 80% to 90% of body requirement). Alternatively, vitamin D, in the form of either vitamin D3 or D2, can be acquired from the diet or dietary supplements. This source of vitamin D is essential when sun exposure or the response of skin to ultraviolet radiation is insufficient, such as in elderly people. Indeed, the skin content of 7-dehydrocholesterol decreases with age together with the efficiency of the human skin to synthesize vitamin D3 [3].
Vitamin D, either as D3 or D2, requires a two-step activation process to become biologically active. Vitamin D3 is transported in the bloodstream bound to a specific plasma protein: vitamin D-binding protein (VDBP). It is taken up within hours following synthesis or dietary uptake to be activated mainly by the liver to 25 (OH)D and, then, mainly by the kidney to 1, 25 (OH) D (calcitriol) [4].
At present, serum 25 (OH)D levels are considered the best measure of vitamin D status [5].
Several epidemiological studies have shown that vitamin D deficiency is highly prevalent worldwide, particularly in the elderly [6,7]. Many observational studies have linked low vitamin D serum levels to major human diseases [8,9], however, interventional studies for extra-skeletal health are still inconclusive [9] and are often affected by methodological issues [10].
In the setting of bone disease, it is widely recognized that low and very low vitamin D levels (i.e., below 20 and 10 ng/mL respectively) have deleterious effects on skeletal health [2], leading to a number of science organizations or expert groups advocating for serum concentrations of 25 (OH)D >30 ng/mL [2].
In addition, there is an even greater lack of consensus about the recommended regimen for vitamin D supplementation (doses, administration schedule, treatment duration, etc.) [2].
This heterogeneity can be explained, at least in part, by the scarcity of comparative pharmacokinetics (PK) data for the different dosing schedules [11,12,13]. Furthermore, there is growing evidence suggesting that the treatment schedule itself (i.e., bolus vs. frequent administration) may impact differently on the effectiveness of the treatment [14,15] and also on clinical outcome, with recent studies and few meta-analyses showing more promising results with frequent administration schedules on skeletal and extra-skeletal outcomes [9,10,16,17,18].
The aim of this open-label randomized clinical trial was to compare the PK and safety profile of high-dose vitamin D supplementation, administered with three different treatment schedules (daily, weekly, or bi-weekly) in an otherwise healthy vitamin D deficient population.

This was a single-center, open-label, randomized, parallel-group study undertaken in male and female healthy subjects to compare the PK profiles of an approximately equal amount of cholecalciferol (DIBASE®, Abiogen Pharma, Italy) administered using three different schedules: Group A: repeated once daily [10,000 International Units (IU)/day] for 8 weeks followed by 1000 IU daily for 4 weeks; Group B: weekly (50,000 IU/week for 12 weeks) and Group C): bi-weekly doses (100,000 IU every other week for 12 weeks).
The regimens adopted in this trial correspond to the highest doses allowed for cholecalciferol (DIBASE®) in Italy, according to its Summary of Product Characteristics (SmPC), for the correction of vitamin D deficiency in adults [19]. The only deviation from SmPC dosing schedules occurred in Group A, where the 1000 IU daily dose for 4 weeks is not indicated in the SmPC; however, these were considered necessary to guarantee almost the same total vitamin D intake across all groups.
The date of the first enrollment visit was 17 October 2017, and the date of the last enrolment visit was 14 February 2018. The date of the last completed visit was 5 June 2018.
This study was approved by the institutional research committee (protocol identification: DIBA/11, EudraCT Number: 2017-000194) and was conducted in accordance with the 1964 Helsinki declaration and its later amendments or comparable ethical standards. Written informed consent was obtained from all individual participants included in the study.
The primary objective of this study was to compare the pharmacokinetic profiles of cholecalciferol (DIBASE®) administered as repeated once daily, weekly and bi-weekly doses in healthy male and female volunteers.
Pharmacokinetic parameters determined from the serum 25 (OH)D concentrations using non-compartmental procedures are listed below:
Secondary objectives of this study were:
(1) To assess the rate of subjects showing 25 (OH)D levels ≥20 ng/mL and ≥30 ng/mL at a steady state and the safety and tolerability of cholecalciferol.
(2) To assess the changes to phosphate-calcium values after administration of DIBASE® as repeated once daily, weekly and bi-weekly doses in healthy volunteers.
Inclusion criteria were: otherwise healthy Caucasian female or male participants aged 18–60 years, BMI between 18.5 kg/m2 and 28 kg/m2; screening 25 (OH)D <20 ng/mL; negative urine pregnancy test. Exclusion criteria were: excessive consumption of tea, cocoa, coffee and/or beverages containing caffeine (>5 cups/day) or wine (>0.5 L/day) or spirits (>50 mL/day) on a regular basis; substantial changes in eating habits in the previous 4 weeks; use of any medicinal product (including glucocorticoids, anticonvulsants, antibacterial drugs, over-the-counter medication, vitamins, and natural products) in the previous 14 days; blood donation of 250 mL or more within the past 3 months; history of clinically significant gastrointestinal, renal (including renal stone formation), hepatic, pulmonary, endocrine, oncologic, or cardiovascular disease; or history of epilepsy, asthma, diabetes mellitus, psychosis or severe head injury; vitamin D therapy or food supplements applied within two months; metabolic disorders of calcium or bones (including secondary hyperparathyroidism), history of angina pectoris, artificial ultraviolet B-rays (UVB) exposure (solarium) in the previous 2 weeks.
After screening, eligible individuals were randomized in a 1:1:1 ratio, in which subjects had an equal probability of being assigned to one of the three treatments. Supplementation was taken with the main meal of the day, regardless of the treatment group and at the same time of day. In order to assess compliance, subjects were provided with a diary to record the intake of the study drug (daily, weekly, or bi-weekly schedule). Subjects had to return the used/unused supplementation and the diary on the next treatment-delivering occasion.
As already specified, treatment with different schedules was administered up to day 84 (week 12) and then discontinued, while follow-up was maintained up to day 112. In all three groups, blood samples for PK analysis were collected pre-dose on each of days 1, 7, 14, 21, 28, 35, 42, 49, 56, 63, 77, 84 during the treatment period and on each of days 85, 87, 89, 96, 103, and 112 of the follow-up period (treatment-free).
Blood samples for calcium, albumin, and phosphate were collected pre-dose on day 1, 28, 56, 84 and 112.
Blood samples collected at each time point were processed (by centrifugation for 15 min at 4 °C) to obtain serum samples. These samples were stored at −70 °C until the end of the study when all of them were analyzed by the LIAISON® 25 OH Vitamin D assay (DiaSorin, Italy), a direct competitive chemiluminescent immunoassay for the quantitative determination of total 25 (OH)D in serum, that was used for the PK assessment. The intra-assay variation coefficient was 8% and the inter-assay variation coefficient was 12%.

Statistical analysis was performed by Advice Pharma Group S.r.l., Milano, Italy, using SPSS software, Version 22 (SPSS, Inc., Chicago, IL, USA).
Analysis of variance (ANOVA) with post-hoc analysis (Bonferroni) and a two-sided Student’s t-test was used to estimate the absolute differences between groups. Two-sided p-values of 0.05 or lower were considered statistically significant. Data are presented as mean ± SD.
To compare the pharmacokinetic profiles of DIBASE® administered as repeated once daily, weekly and bi-weekly doses in healthy male and female volunteers, the ratios with associated 90% confidence intervals (CI) for Cmax, AUC0-84, AUC0-112, and AUC84-112 obtained using the residual variance from the analysis of variance on log-transformed variables, were calculated using 1-way ANOVA for each of the dose groups, The sample size of 25 subjects per arm was primarily based on clinical judgment and practical considerations and not on formal statistical reasoning. However, the selected sample size of 25 subjects per group would allow detection of a change in trough 25(OH)D concentration from baseline of 16 ng/mL with a statistical power of 80% and a Type I error of 0.05. In addition, with 25 subjects per group, there was an 80% probability of detecting an adverse event (AE) with an underlying incidence rate of 0.07.

In total, 251 healthy volunteers were screened for eligibility. Of these, 75 subjects were randomized to treatment (25 in each treatment arm) (Figure 1).
Of the 75 randomized subjects, 73 volunteers completed the study and 2 prematurely discontinued. One subject in Group A discontinued due to an AE (reported as skin rash with mild severity and not related to the treatment), and 1 subject in Group C discontinued due to withdrawal of consent.
Demographic and biochemical characteristics at baseline are reported in Table 1. No significant difference between treatment groups was observed at baseline for any of the reported parameters. Compliance to treatment was 100% for each group at each evaluation.

4.4. Changes in Calcium, Phosphate and Albumin

In summary, findings from the present study demonstrate that as well as maintaining an excellent safety profile, normalization of 25 (OH)D serum levels was quickly achieved with three different supplementation regimens. However, a more refracted schedule was observed to provide a higher systemic 25 (OH)D exposure. Further studies undertaken to investigate whether these observed differences in PK can explain the improved clinical outcomes seen with the daily administration compared to bolus-based regimens are warranted.

The study was financially supported by an unrestricted grant from Abiogen Pharma. The funder had no role in the design, performance, analysis, interpretation, or reporting of the study. 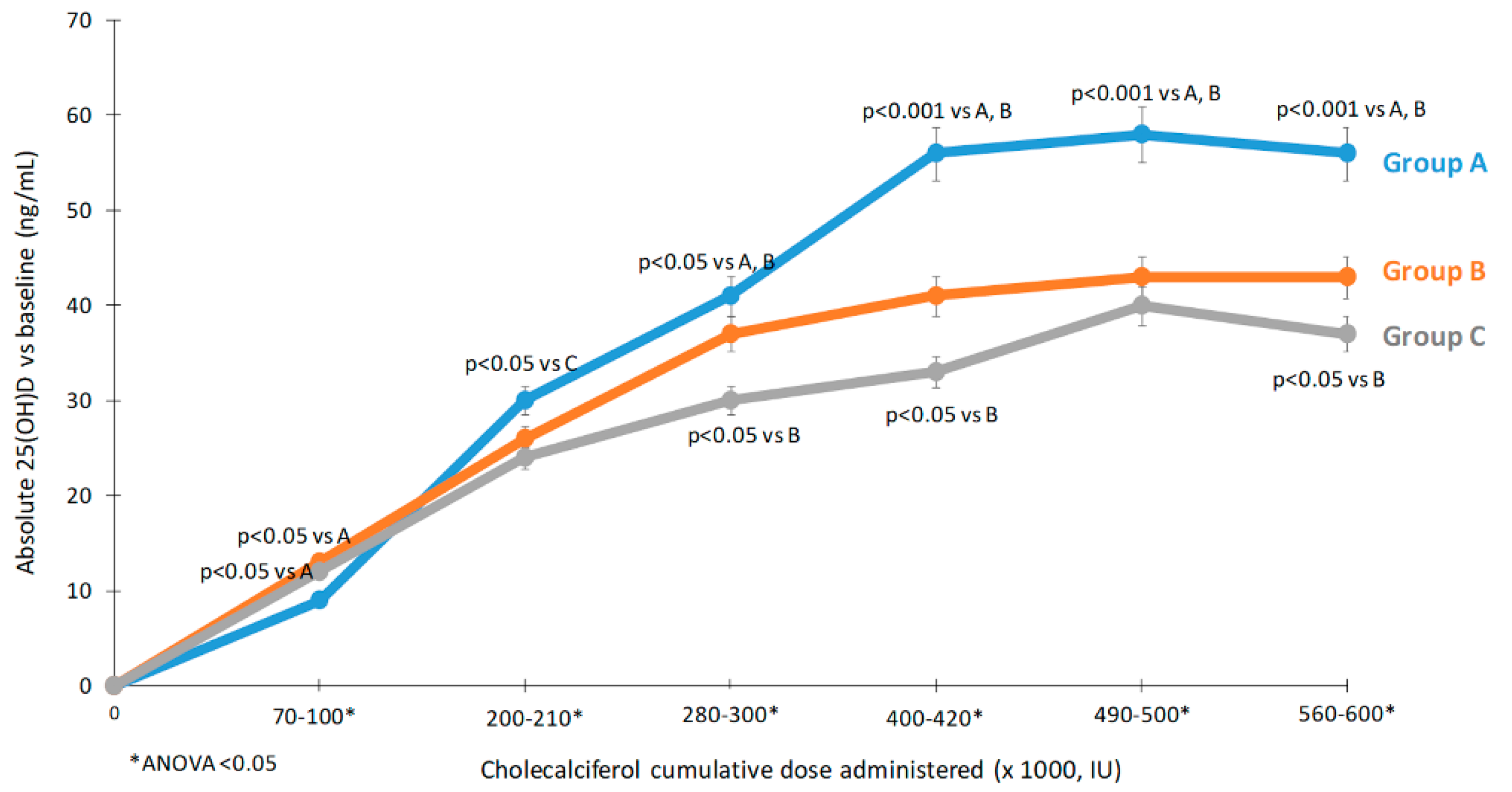