Research in patients with Eating Disorders (EDs) showed high rates of Food Addiction (FA) even in restrictive subtypes. The majority of studies were conducted on adult population. The present work aimed to describe and compared FA in adolescents diagnosed for different EDs and to evaluate its association with patients’ psychopathology. Patients aged 12–18 y were included in the analysis. FA was assessed using the Yale Food Addiction Scale 2.0. The rate of FA was of 49.4% in the whole sample (n = 87, F = 90.8%) and of 53.7% in patients diagnosed with restrictive anorexia nervosa. No difference in FA frequency was detected between EDs. A worse psychopathological picture was found in patients diagnosed with FA. Higher age, higher score to the Eating Attitudes Test–26 and to the Eating Disorder Inventory-3′s Interoceptive Deficits scale have been detected as the major predictors of FA in our sample. FA may be considered a transnosographic construct, not linked to the subtype of ED but to patients’ personal characteristics and, in particular, to age and interoceptive deficits. A worse psychopathology might be considered a risk factor for the presence of FA in EDs. View Full-Text
Keywords: food addiction; adolescents; eating disorders; YFAS 2.0 food addiction; adolescents; eating disorders; YFAS 2.0
►▼ Show Figures 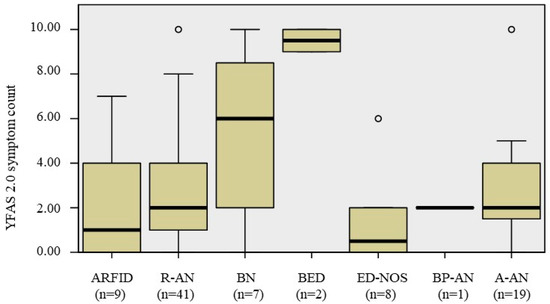